Here are some of the animals and birds we encountered on our recent travels through four National Parks in Sabah.  First up, a few birds for which I do not do justice, but managing to catch them at all I consider a bit of an achievement. 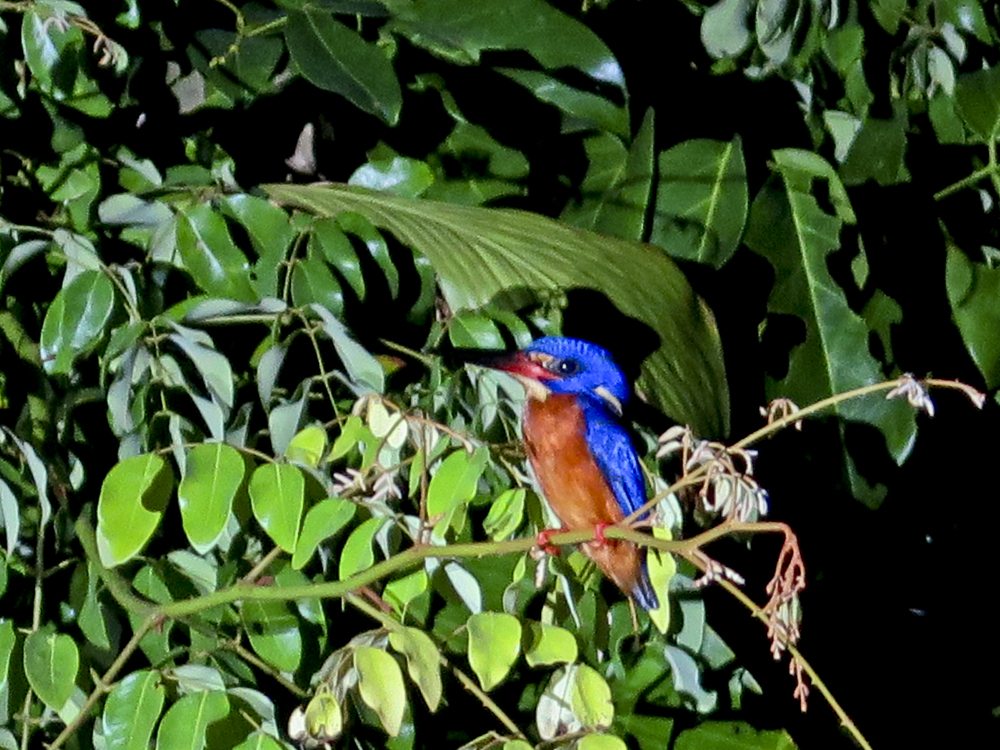 A Blue-Eared Kingfisher on the Kinabatangan River 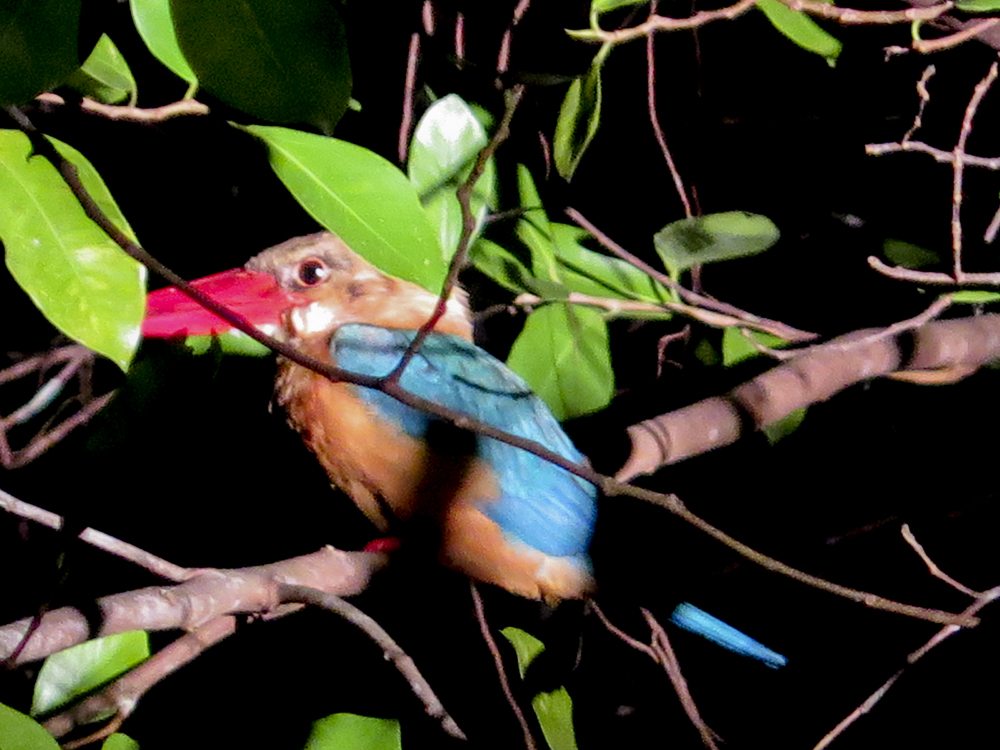 A Stork-Billed Kingfisher ‘sleeping’ with its eyes wide open 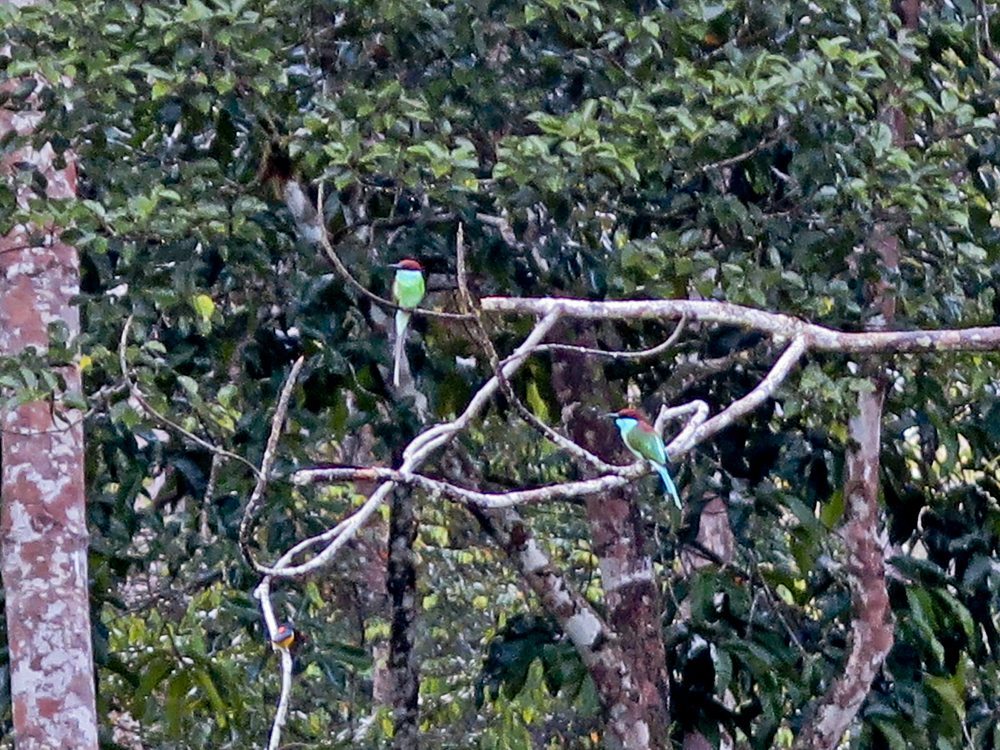 A pair of ‘Blue Birds’ – I am afraid I can’t recall the proper name, but they were very sweet perched there together 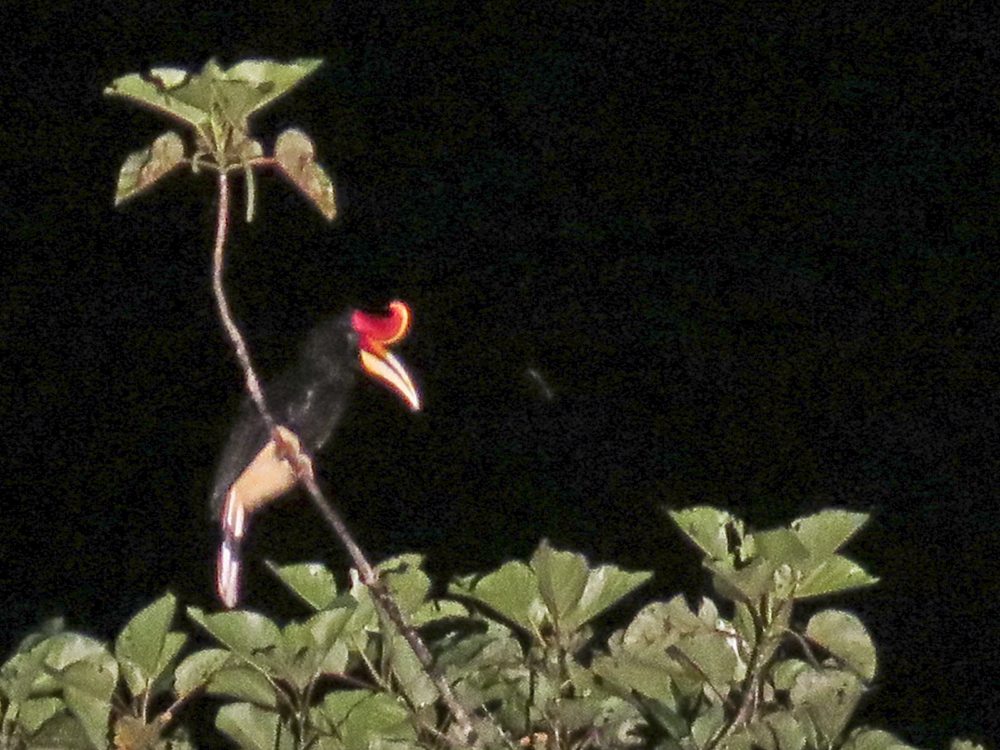 A rather blurred Rhinoceros Hornbill, but magnificent all the same 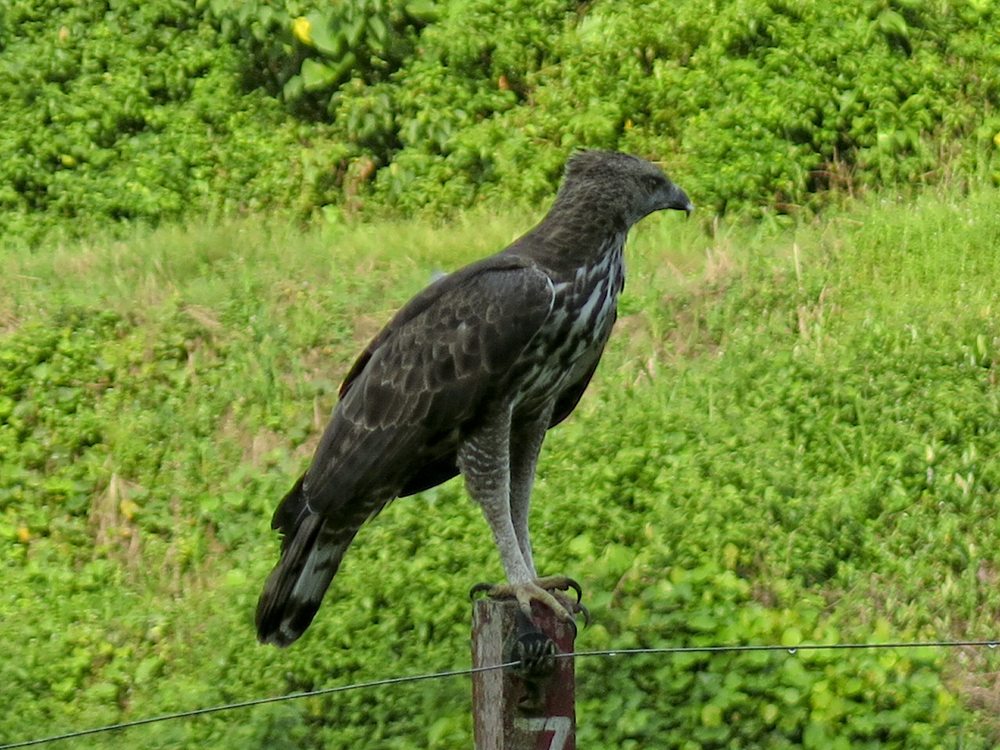 An elegant  Changeable Hawk Eagle in the Danum Valley 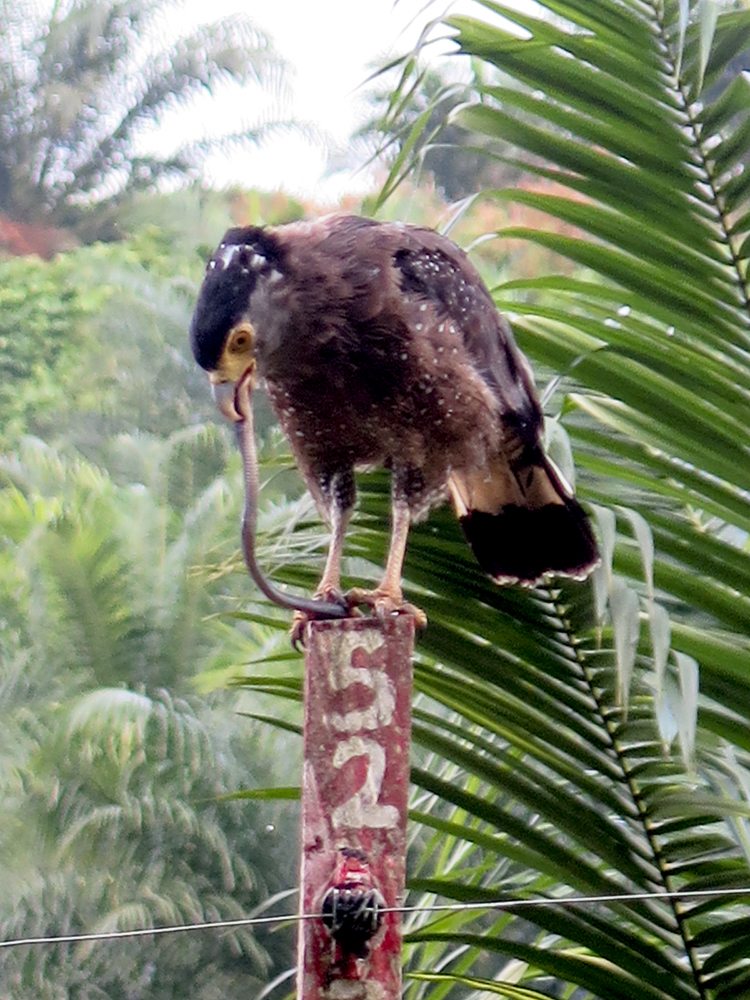 A Crested Serpent Eagle living up to its name

Next up are some of the other creatures found in the wetlands and in the rainforests of Sabah and which we were fortunate enough to encounter on one or other of our expeditions.

A Bearded Pig foraging for his next meal 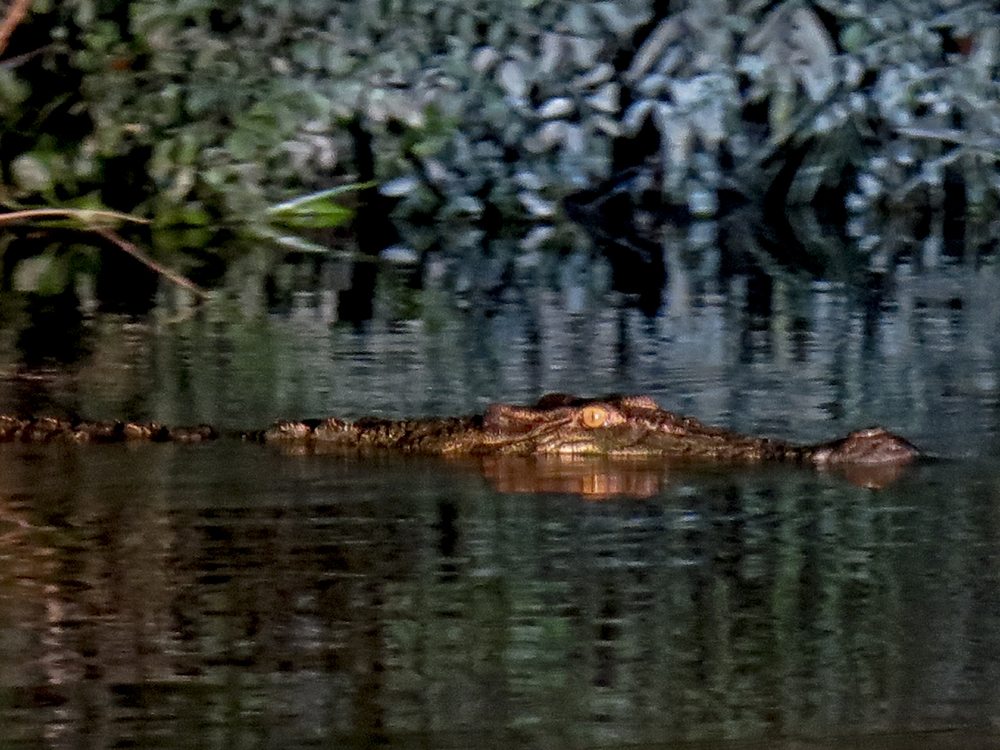 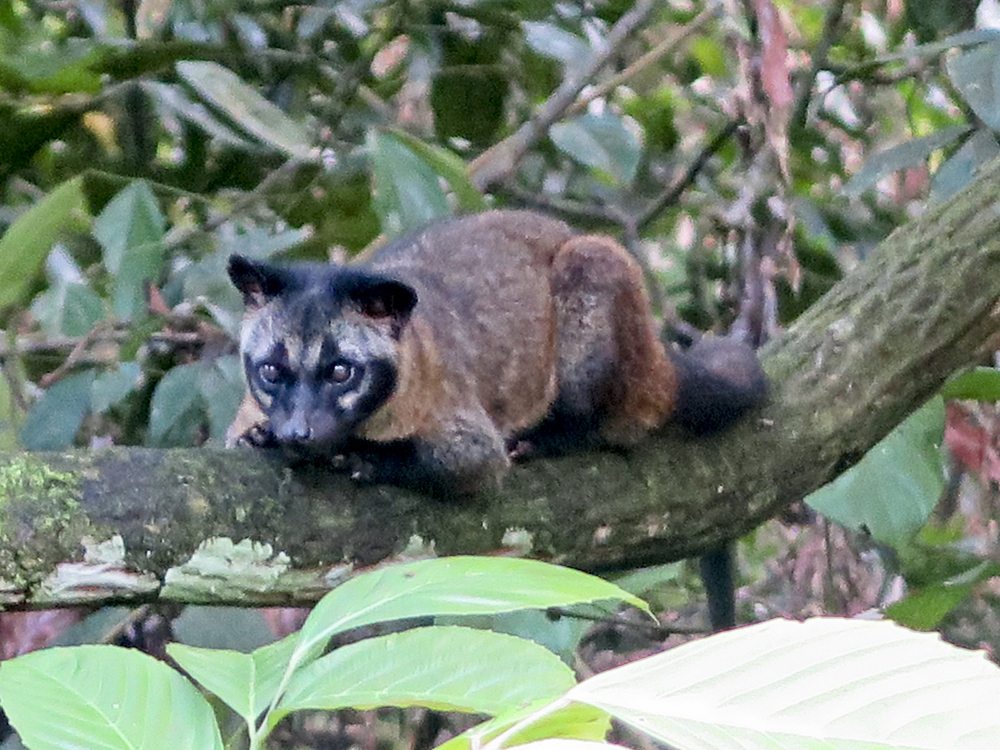 Then there were some bigger animals too, the Sunbears at the  Rehabilitation Centre in Sepilok and the lone male elephant who enjoyed squelching through the new extrusions of the mud volcano at Tabin Wildlife reserve. 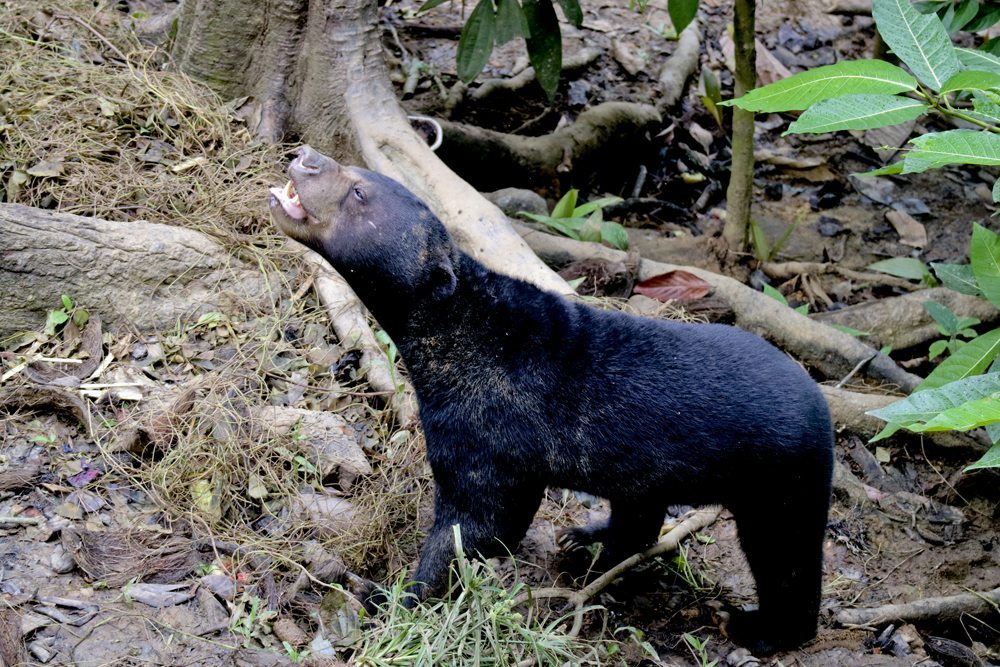 A Sunbear looks down from his position high in a tree 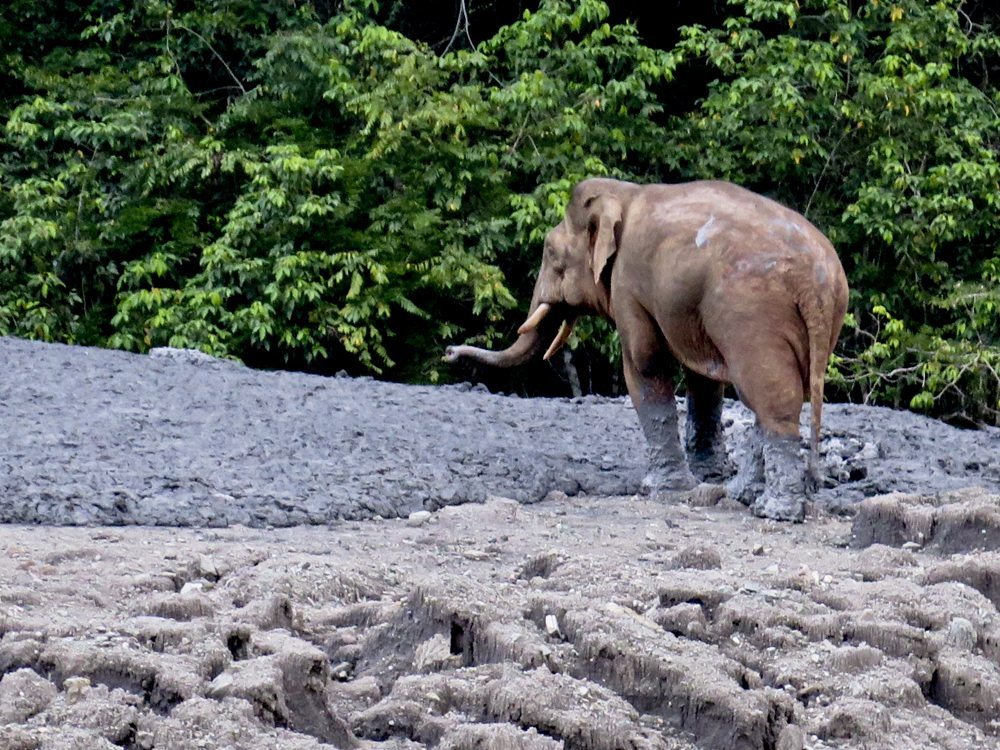 A Borneo Pygmy elephant already well muddied, even his long tail, at the mud volcano 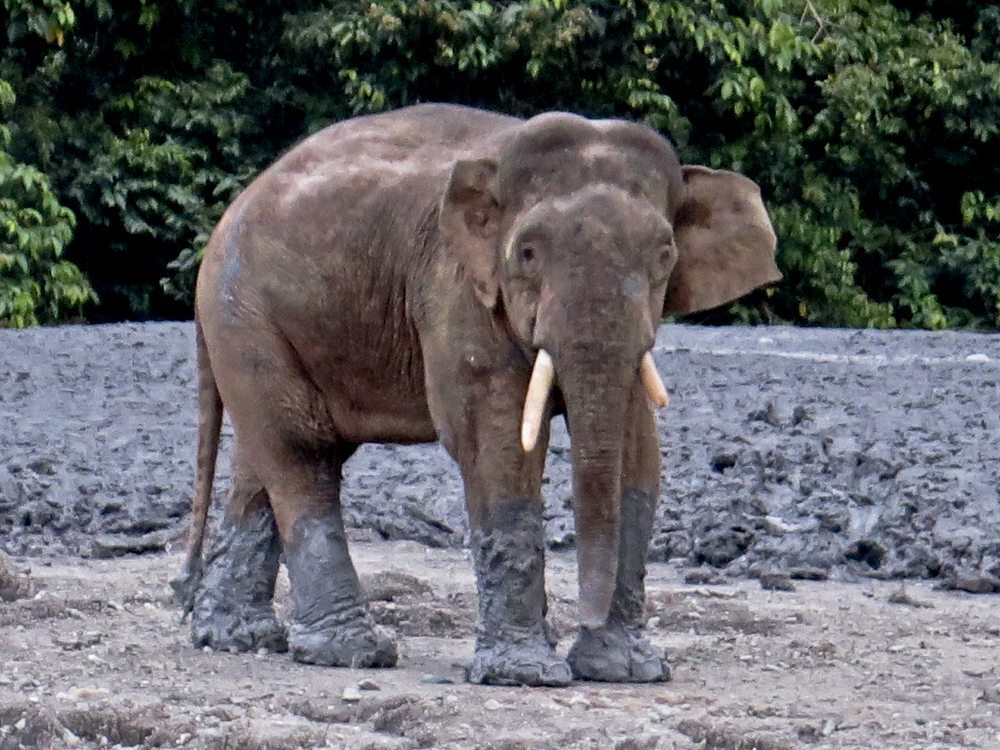 The elephant was very well aware of his audience in the watchtower, so we remained wary and made a quick getaway

And then,  of course, there were the monkeys – long and pig-tailed macaques who were very playful, maroon langurs
(aka red-leaf monkeys) who dared to come quite close and the wonderful, but more elusive proboscis monkeys

A Long-tailed Macaque monkey amid the foliage 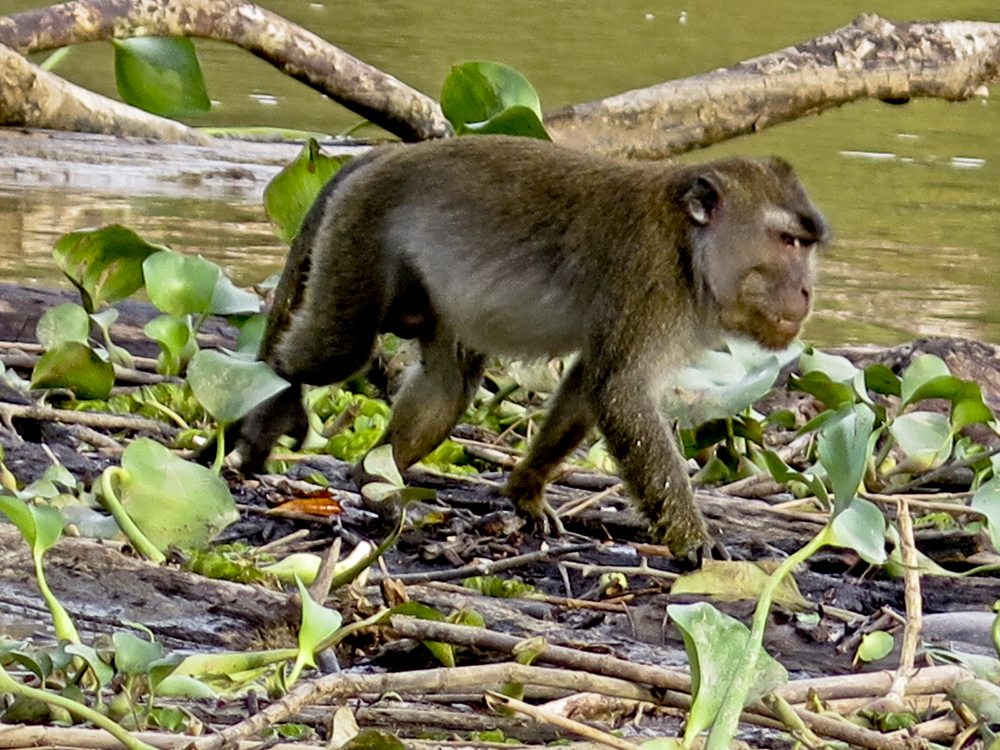 A Long-tailed Macaque by the river 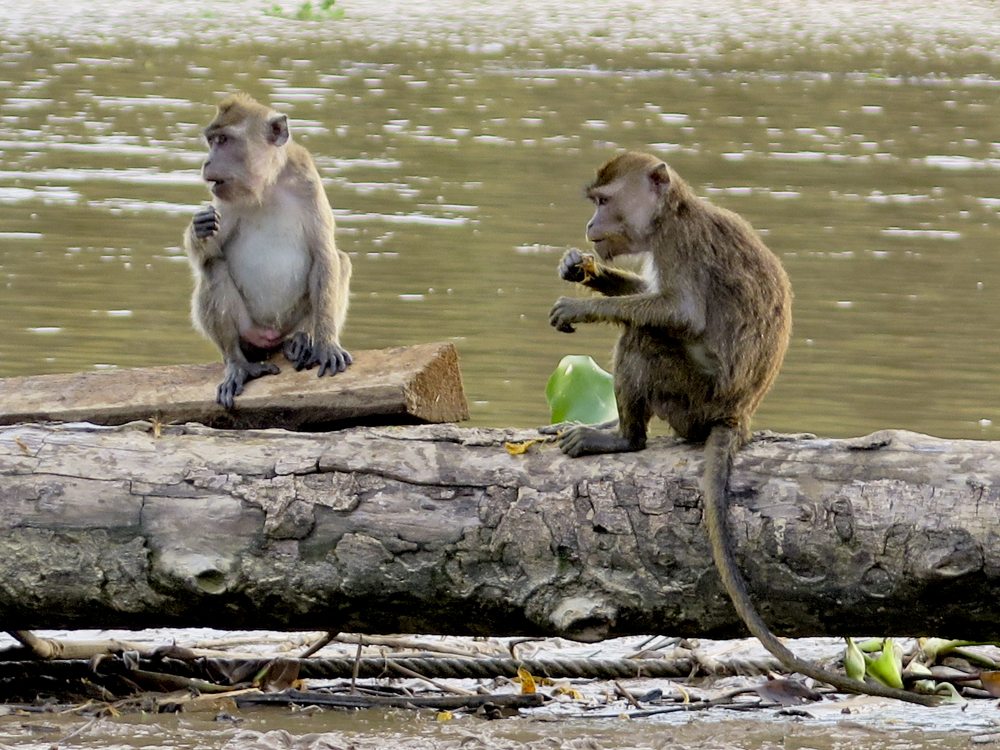 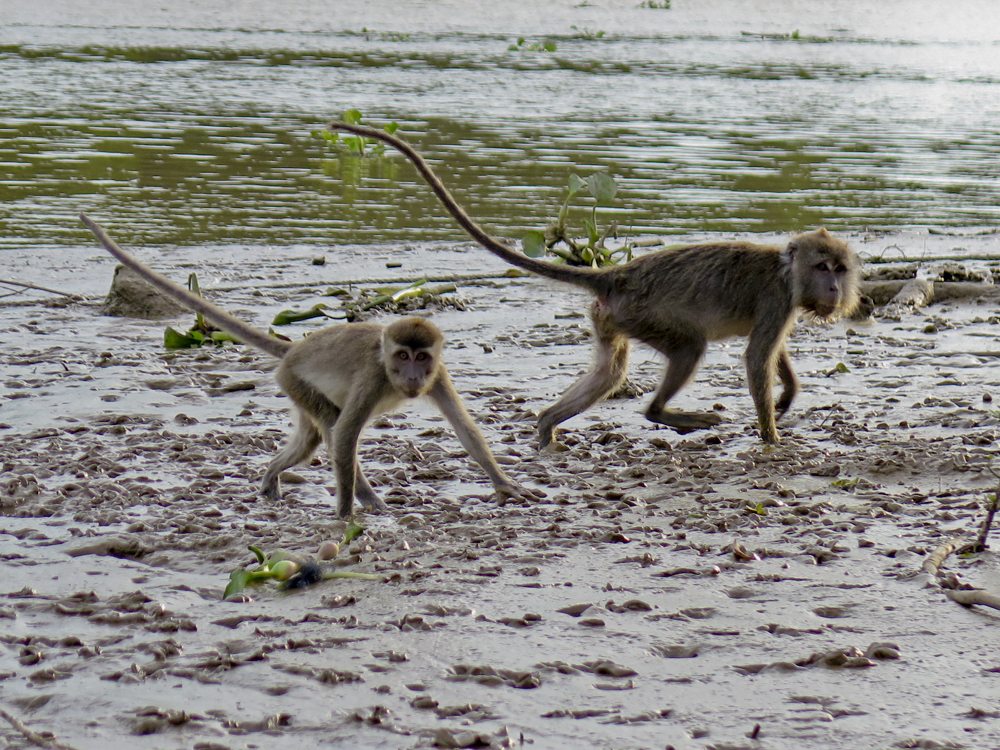 Long-tail Macaques on the move 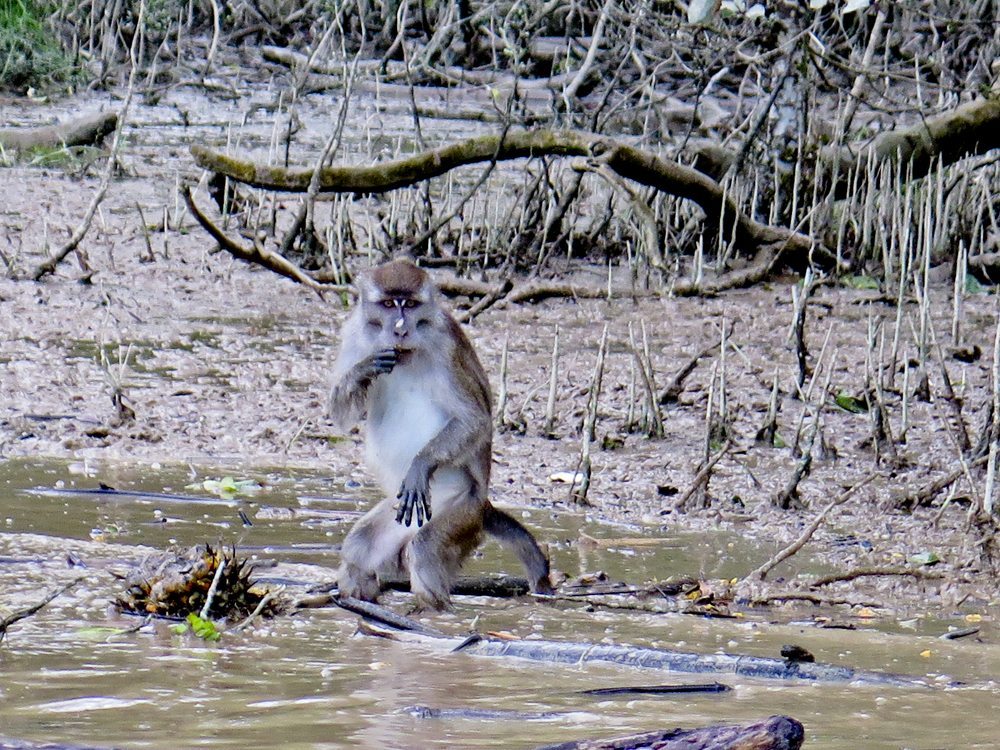 A Long-tailed Macaque finishing off the last of the bananas 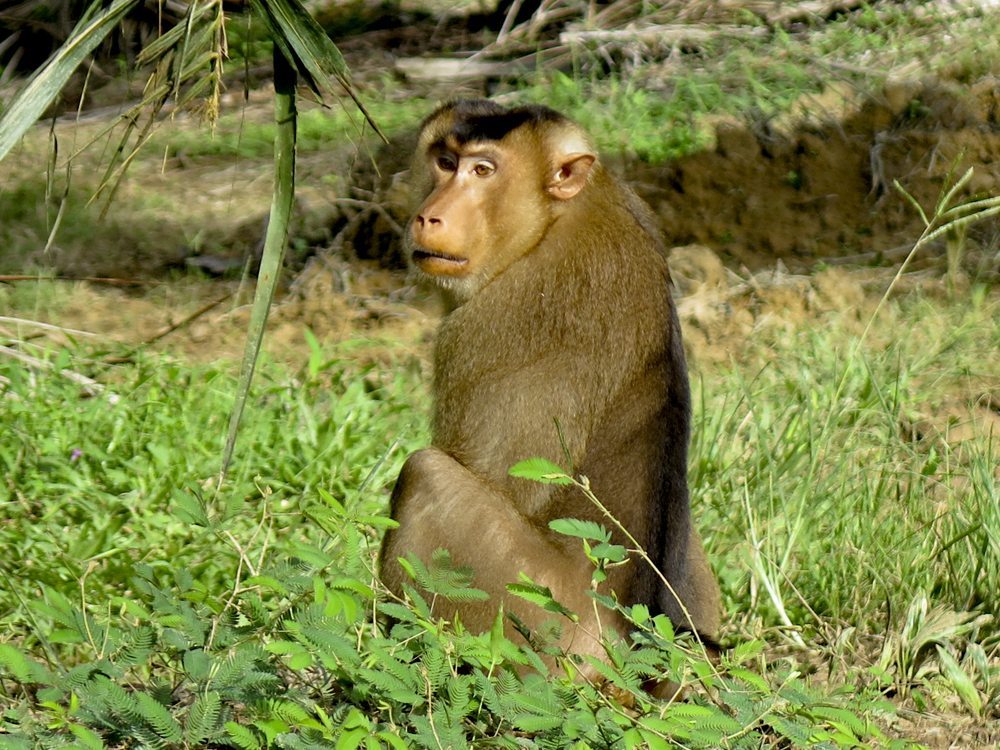 A Pig-tailed Macaque relaxing in the Danum Valley 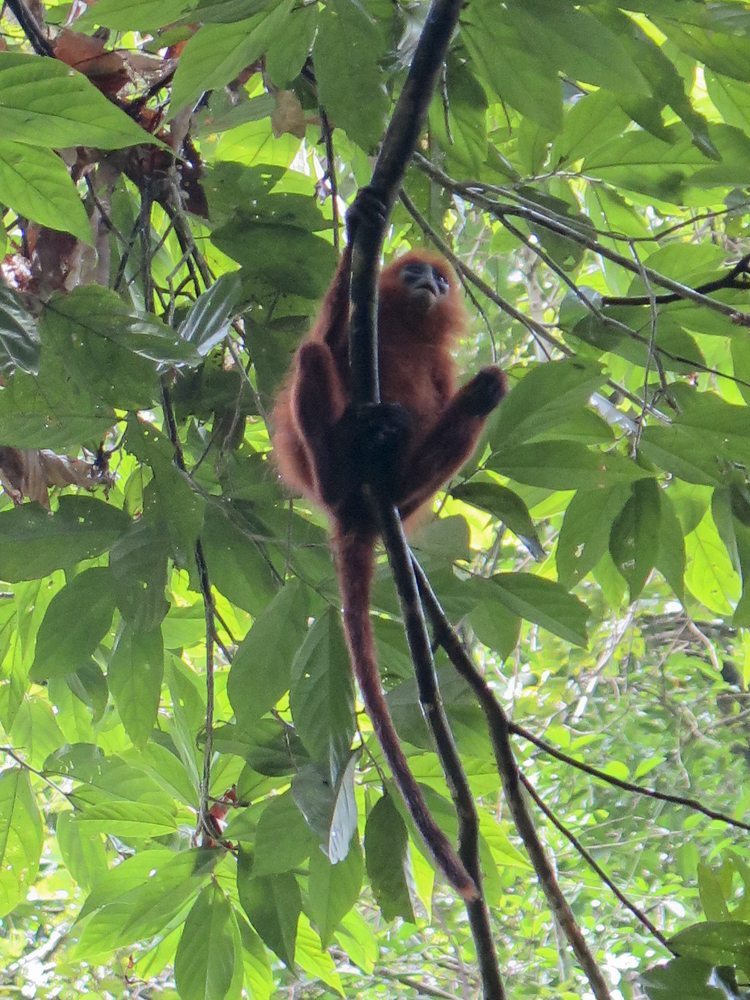 A Maroon Langur (aka Red-leaf monkey) high in the trees 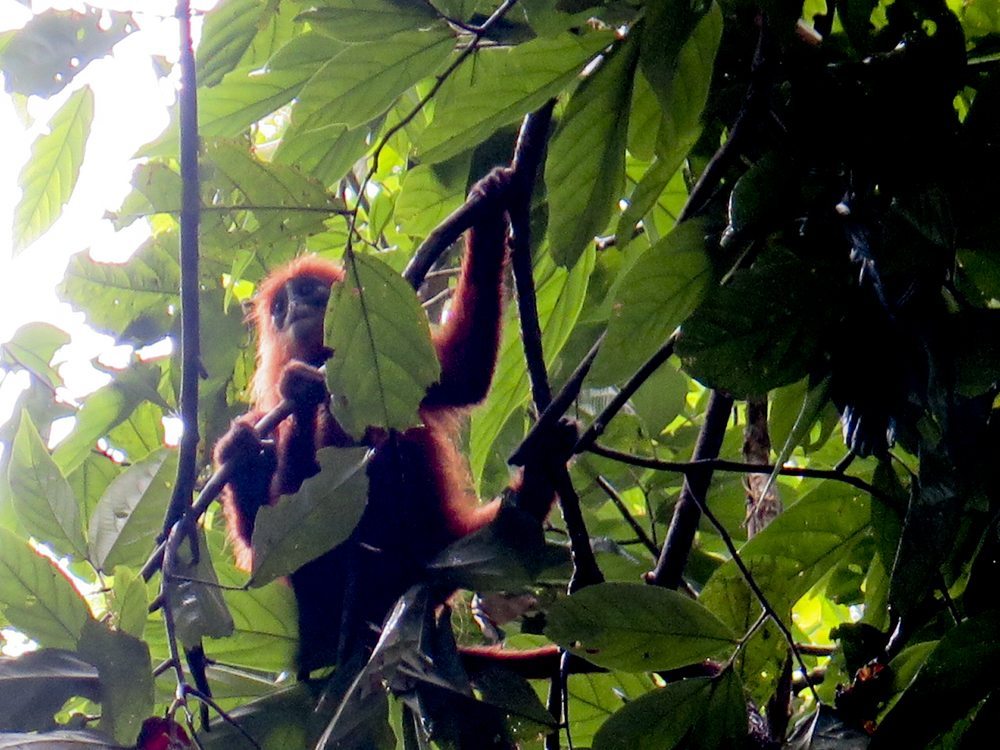 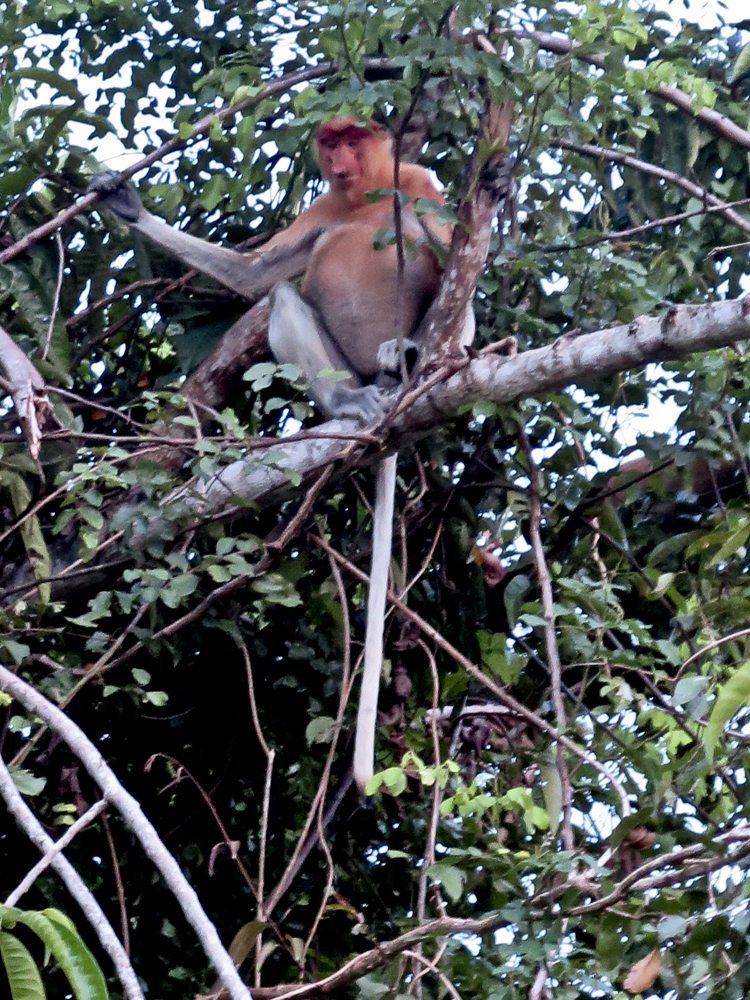 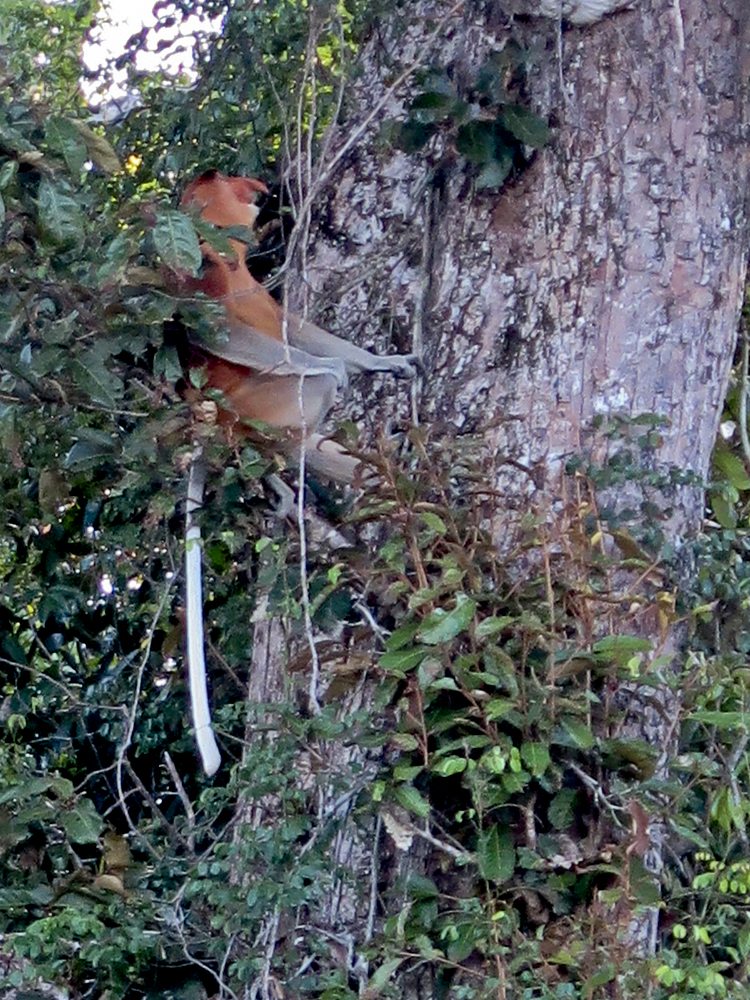 In profile, this Proboscis Monkey shows us his impressive nose

And finally, last but certainly not least, it was a privilege to be able to visit the famous Sepilok Orangutan
Rehabilitation Centre, founded in 1964 and now home to some 60-80 Orangutans who roam freely in the reserve.
We were also lucky enough to encounter a few in the wild, but at a distance. 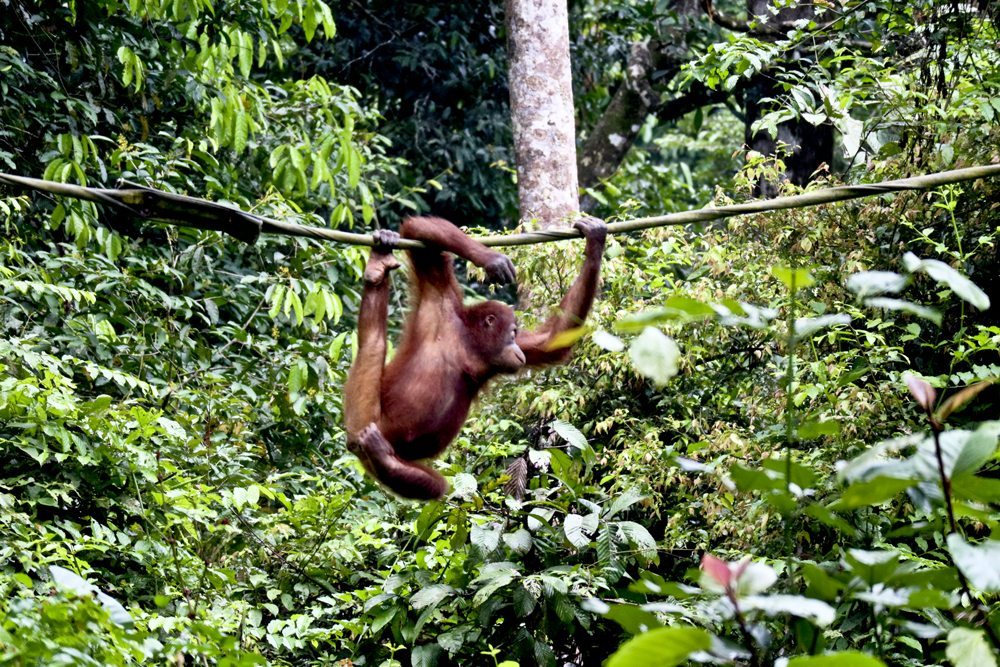 Portrait of a young male Orangutan 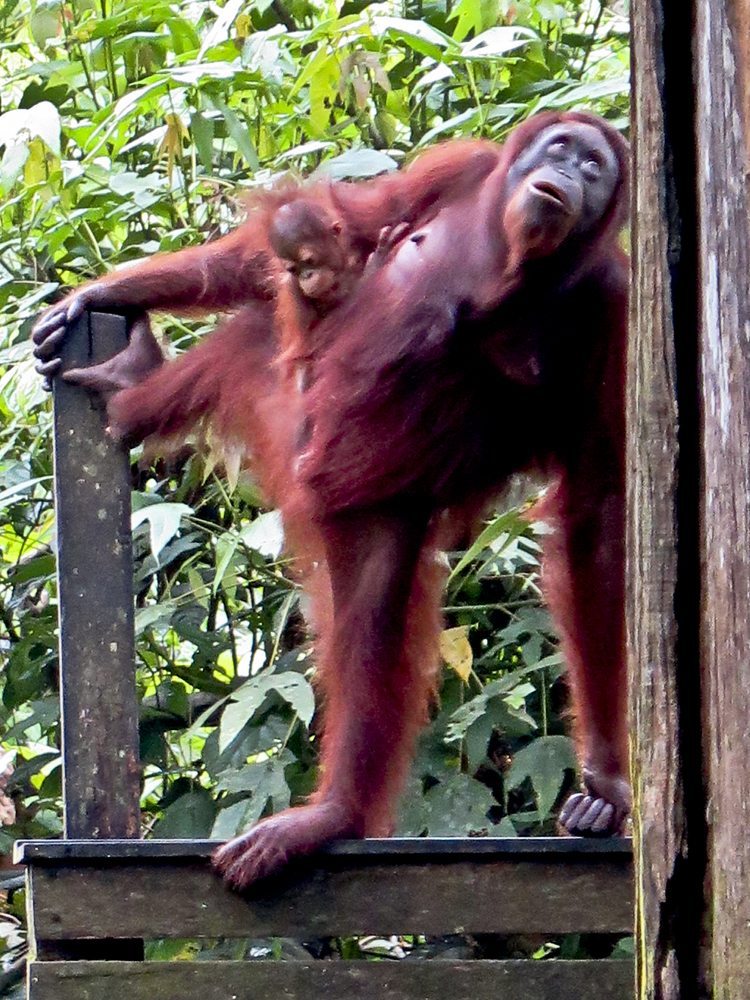 Mother and baby arriving to enjoy their meal 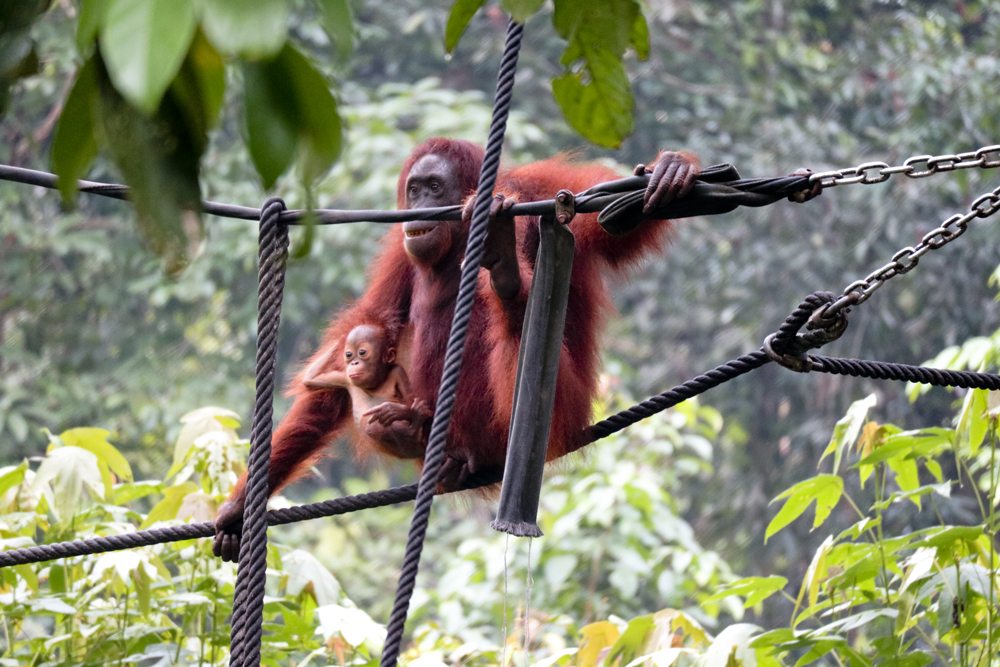 Beautiful portrait of a mother and her baby 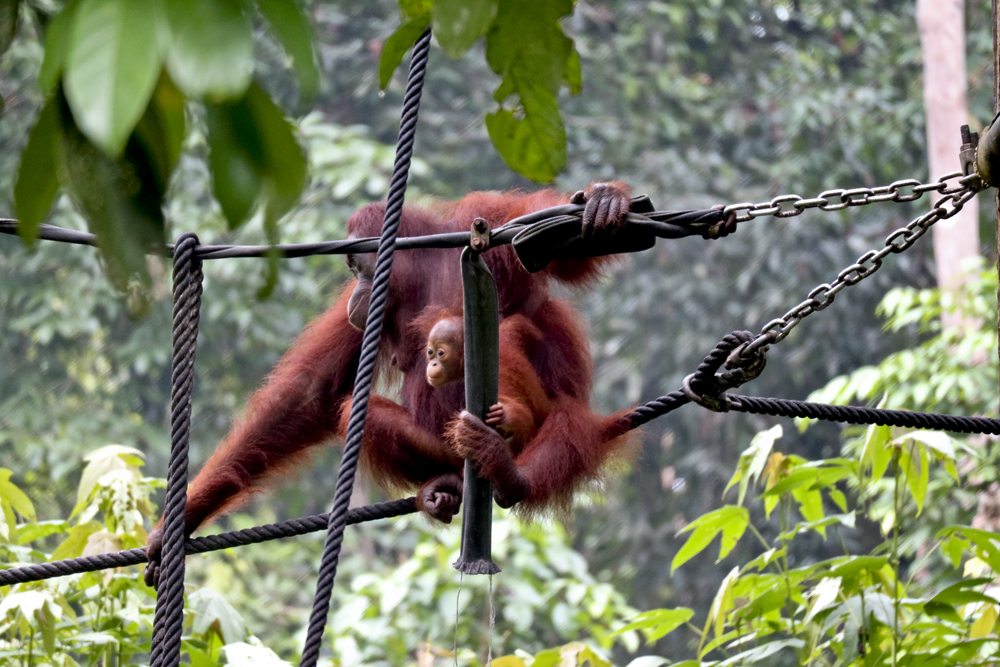 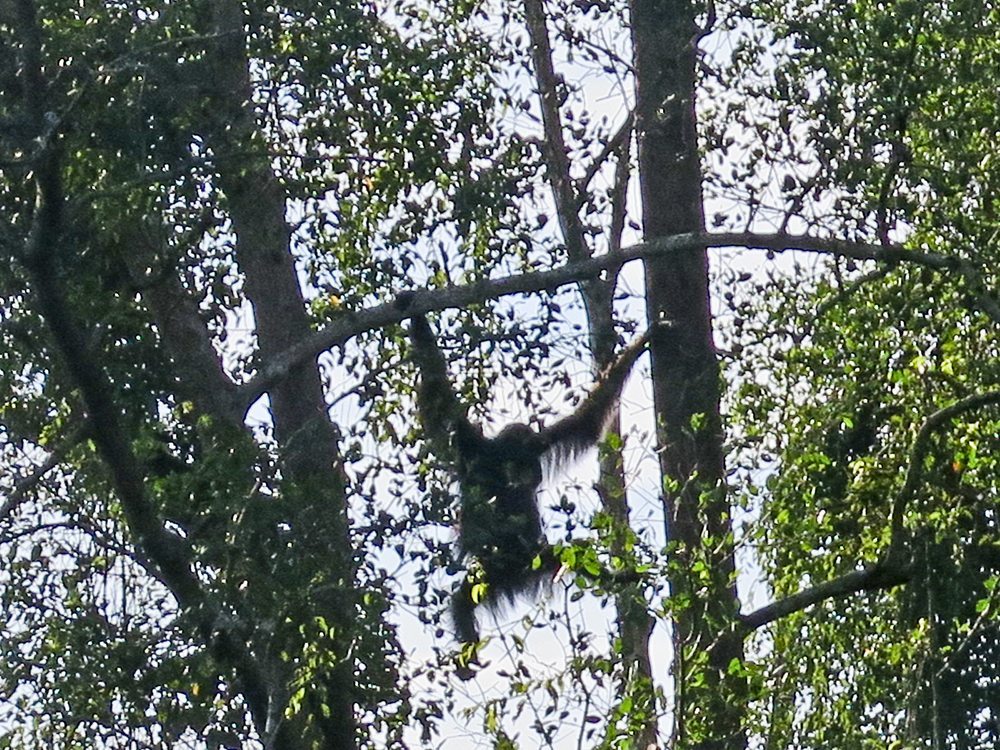 And for my last image for this series, the silhouette of a wild Orangutan swing through the forest

So there you are, a glimpse of life in the wild in Sabah, Malaysian Borneo, or at least the animals that I managed to capture on camera. The many other sightings will just have to remain in my memory of this wonderful trip.

For my next blog – tomorrow I hope, we will be looking down instead of up, at the wonders of the forest floor.