“To visit the Republic of Palau, an archipelago of the Micronesia region in the western Pacific Ocean, is to experience a scenically absolutely magical place. For such a tiny area of land, its beauty is almost overwhelming.

I spent 10 days in Palau in 2009, exploring the islands of Koro, home to the capital city and most of the population, and Peleliu, renowned for its battle relics still largely intact after ferocious fighting during World War Two. But most of my time was spent camping on several beaches, kayaking from island to island, through the mangroves and into caves, and snorkeling the crystal waters in some choice locations. The island nation has an extraordinary array of natural wonders. It is an archipelago of about 200 largely pristine limestone and volcanic islands, blanketed in emerald forest, surrounded by a shimmering turquoise lagoon. Underwater, Palau’s has an equally exciting seascape, fascinating wrecks, including some planes from WW II and stunningly diverse marine life.  The coral exhibits wondrous shapes and colours, there is a lake which is home to unique non-stinging jelly fish and along ‘the blue wall, its vast vertical drop falling away beneath you,into darkness, you can swim alongside turtles, sharks and a vast array of colourful fish. It is no wonder some have named it ‘the underwater Serengeti.'” 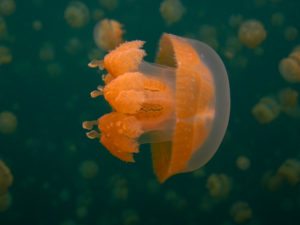 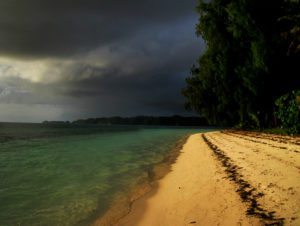