In this third blog from my Sabah trip, I am sharing a few details gleaned from walks in the forest – with a focus on the forest floor and shrub layers.  The tropical rainforest has five layers – the emergent layer where trees can grow to heights of 50-60 metres, the main canopy layer which is home to 50% of the plant species, the understory layer which only receives about 5% of the sunlight shining on the main canopy, the shrub layer where almost all of the rainforest animals are found, and the forest floor which receives only 2% of the sunlight and where ants, termites, worms and fungi recycle nutrients from dead plant and animal matter into soil which in turn nourishes the plants.

Taking a little time to observe the forest floor revealed all manner of delights. I loved the variety of fungi shapes and colours, the interesting patterns and habitats of the insects and the way the wild flowers and plants emerged through the undergrowth to attract the eye. 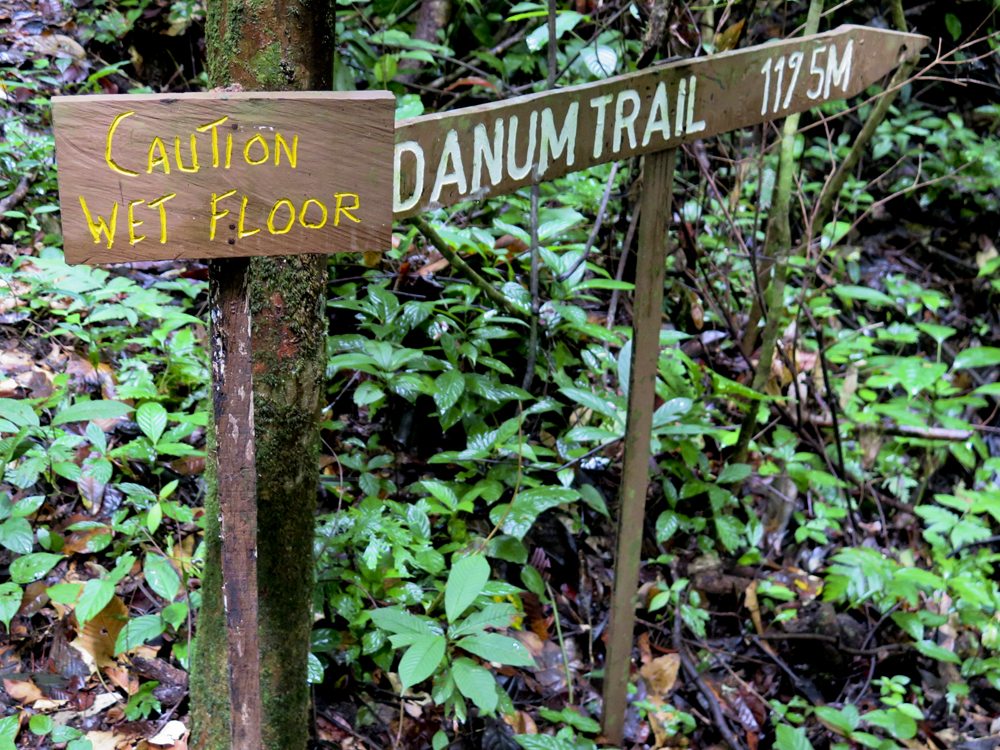 Just in case one thought otherwise, we were warned that the ‘forest floor’ could be a little wet and slippery 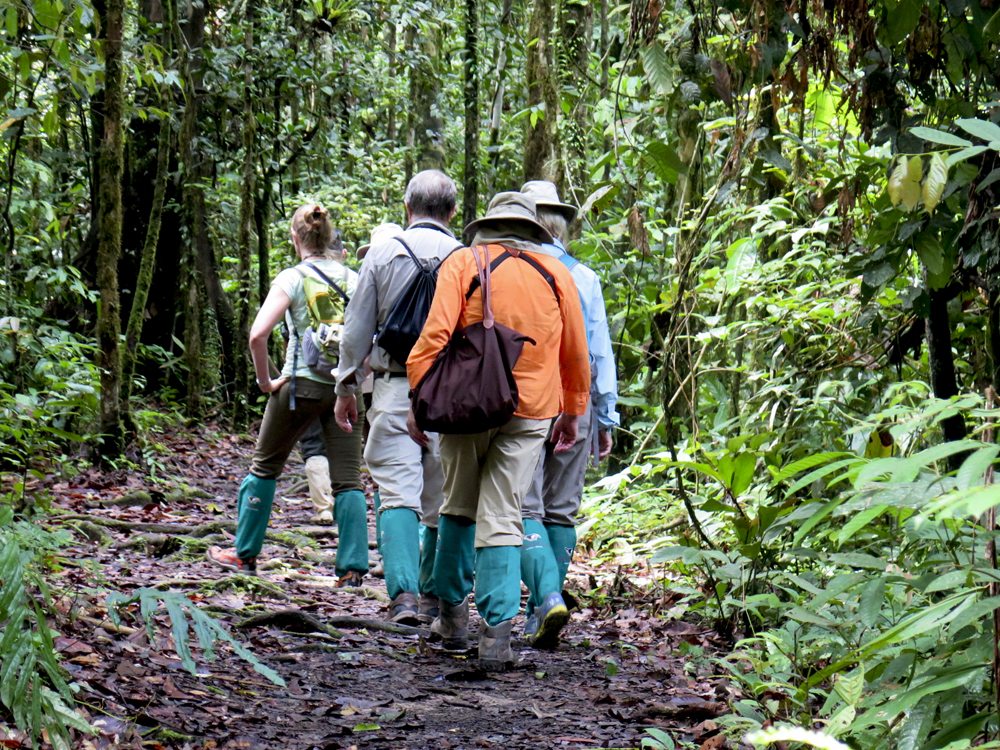 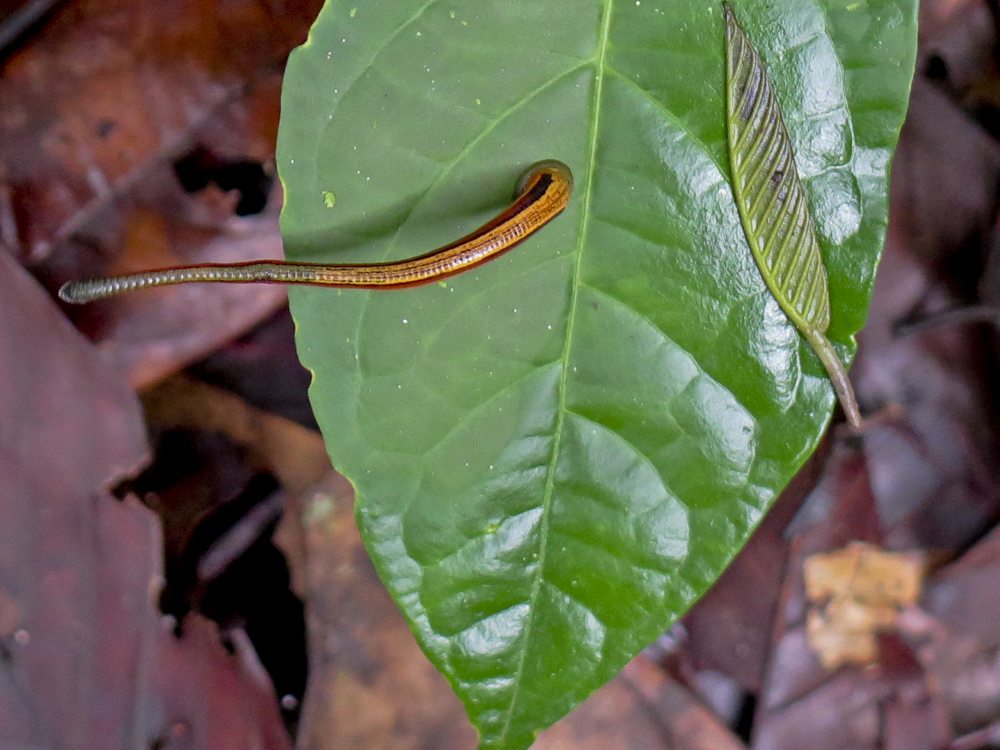 And indeed there were plenty, like this tiger leech, just waiting and poised to latch onto any available skin 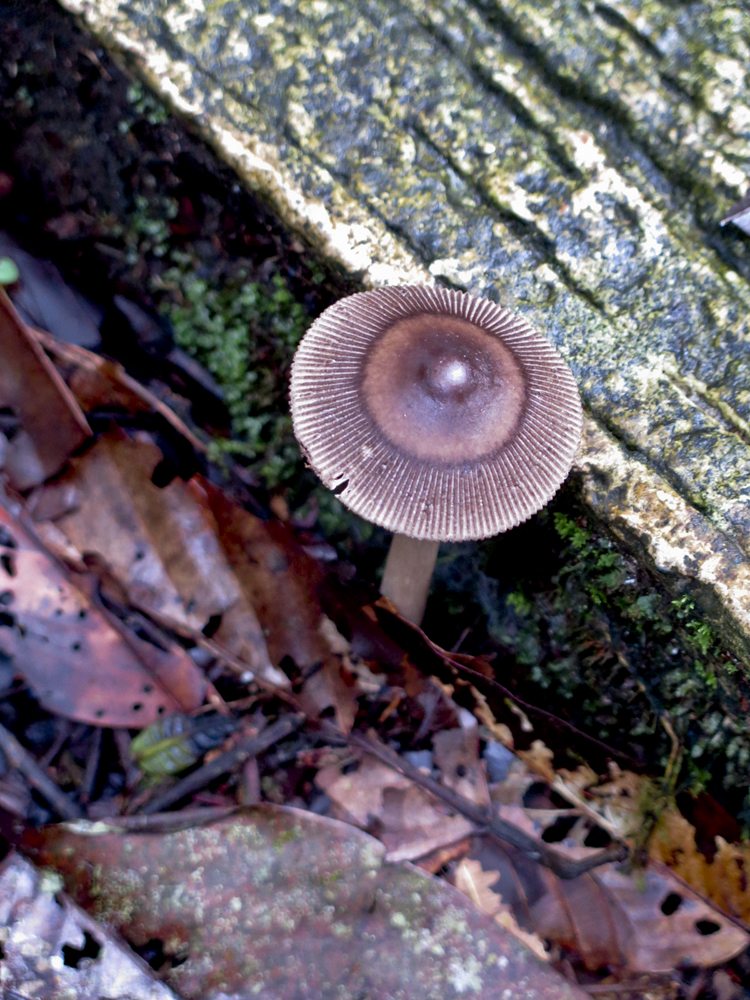 There were toadstools and fungi of all colours and shapes, for which only an expert would know the names 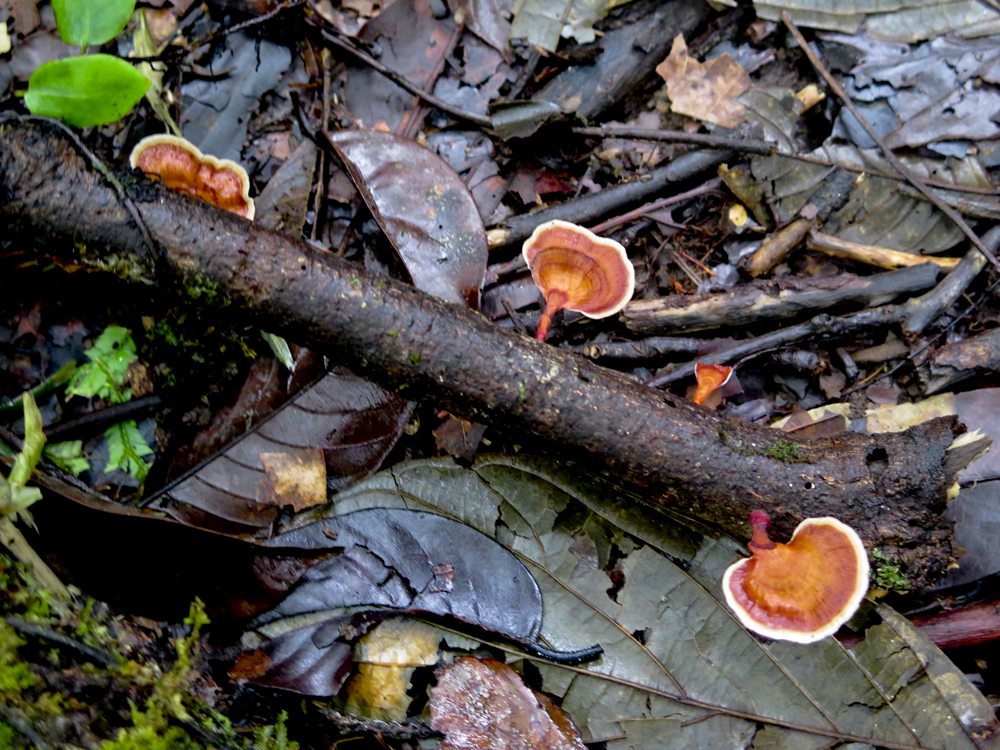 Some clinging to the sides of fallen branches 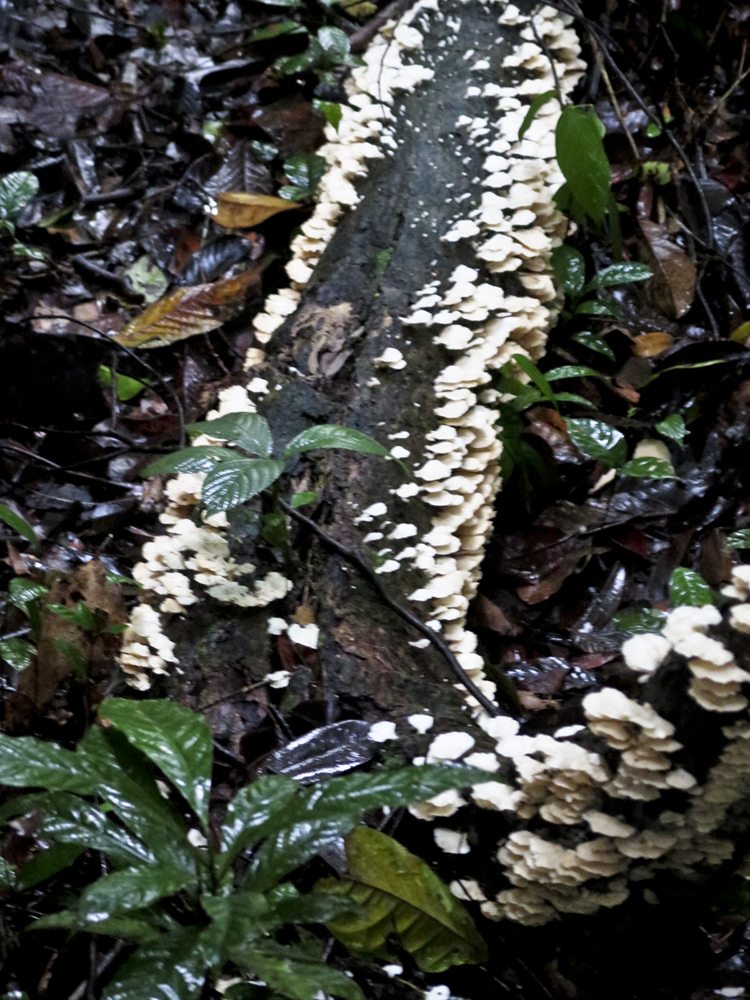 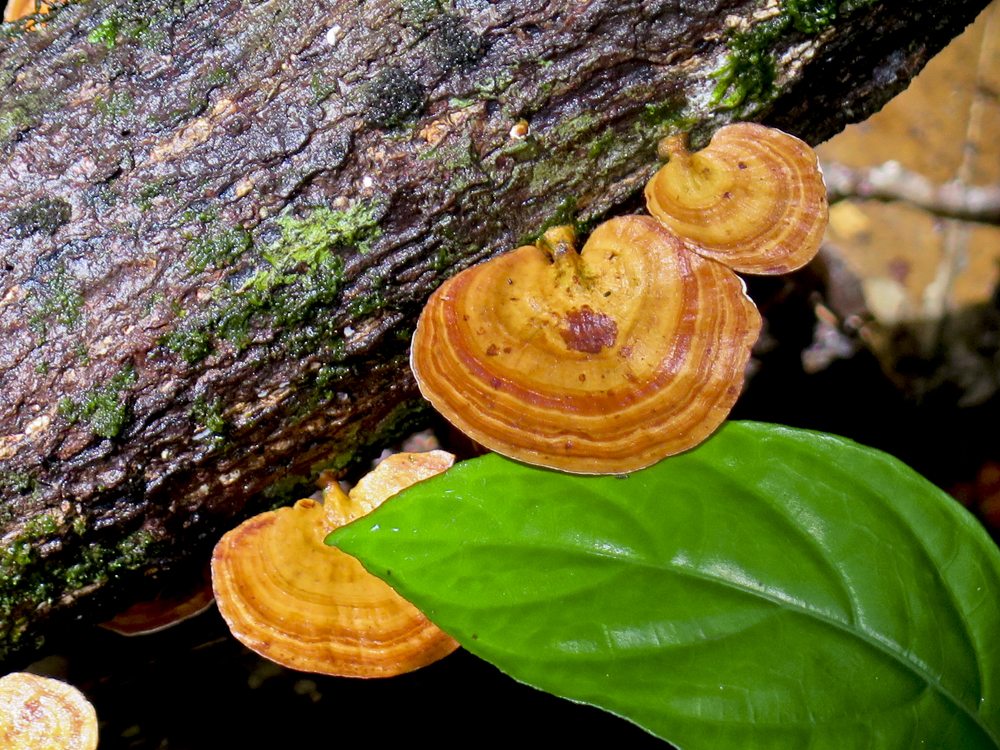 Bright spots of colour against a moss covered log 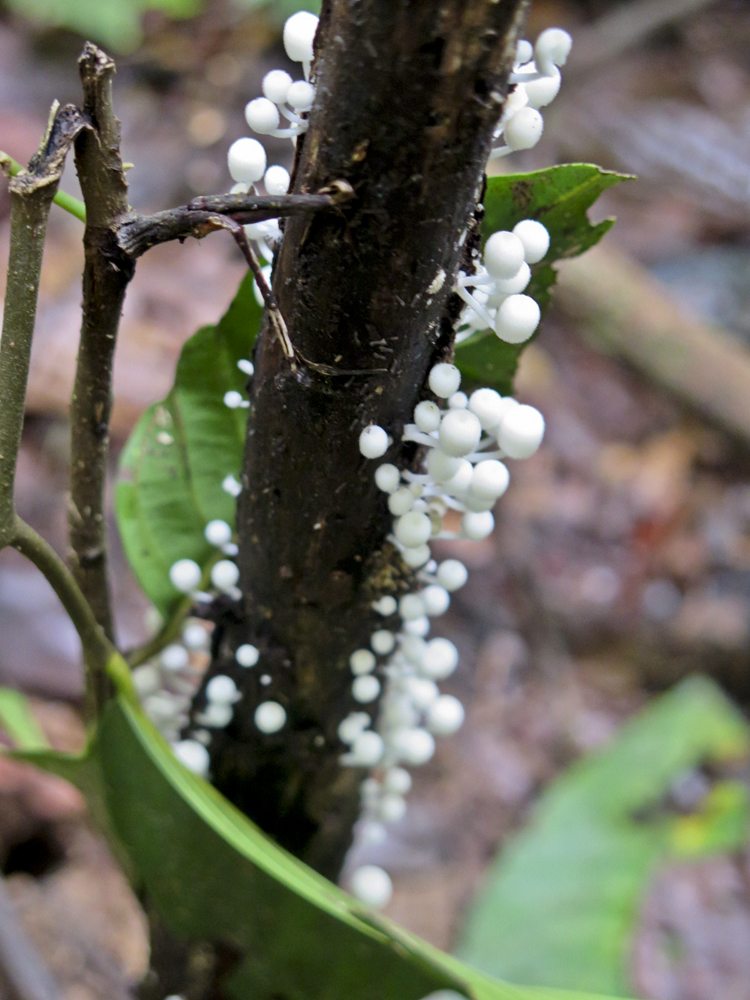 Others already sprouting on living shrubs 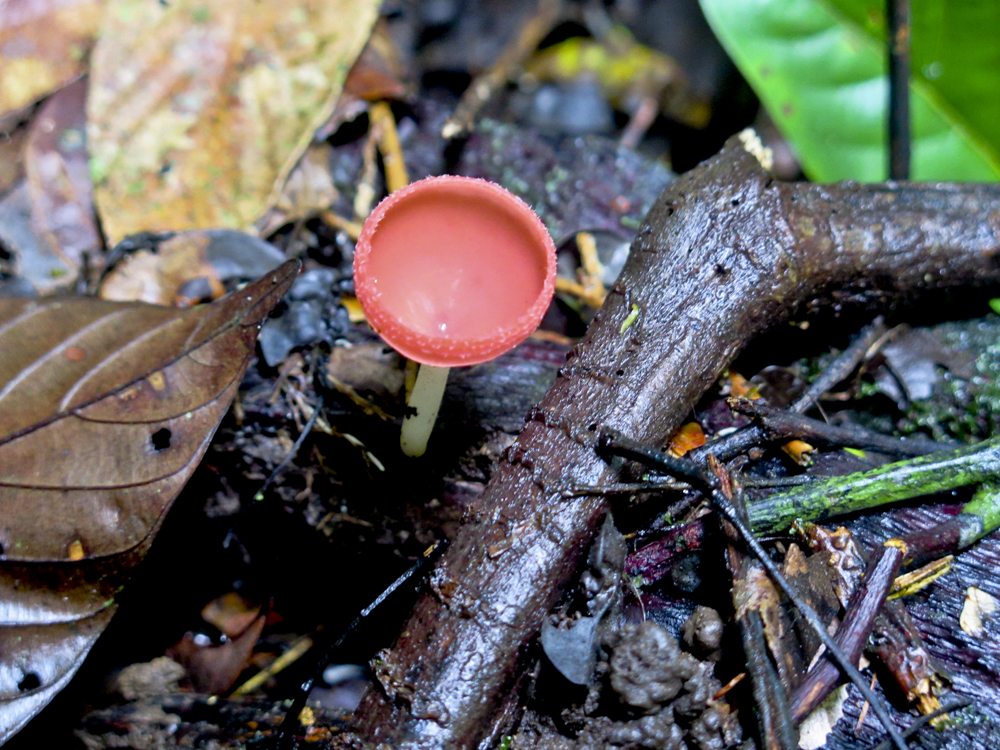 And my favourite, an aptly named Red Cup toadstool

Then there were the lizards and insects to watch out for, many very difficult to see but our guides
had eagle eyes and knew of places where we were likely to see some 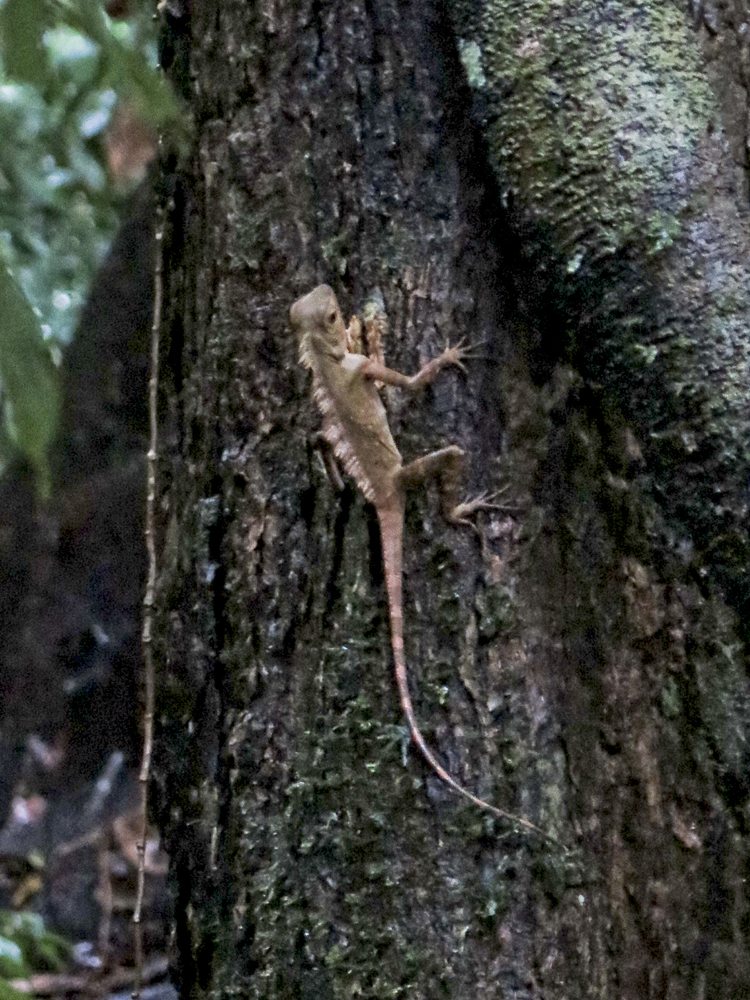 A beautifully spiked back warns off the predators of this lizard 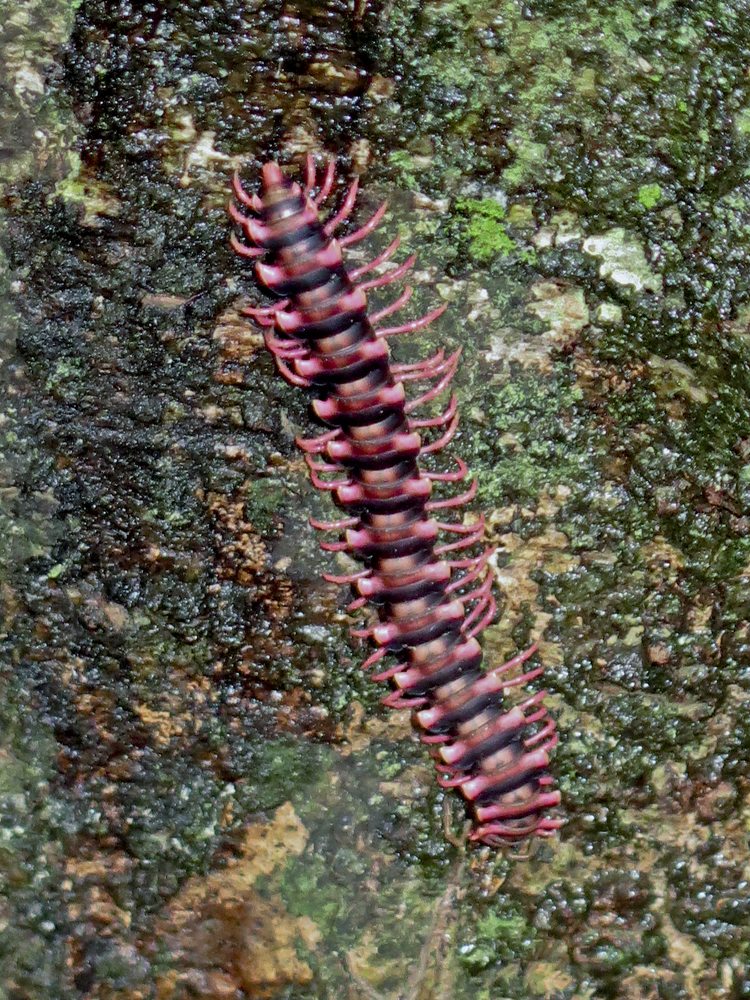 And this colourful creature is a ‘Tractor Millipede’ 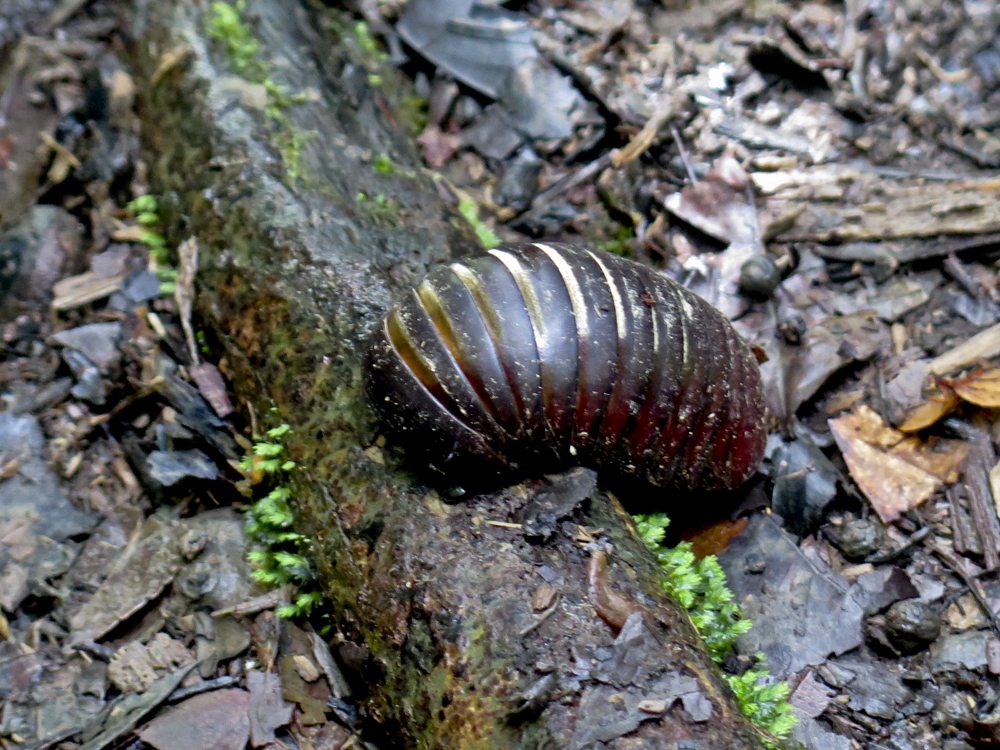 Another one – the Dollar Millipede, so named because it curls into a ball when attacked, to look a little like a coin 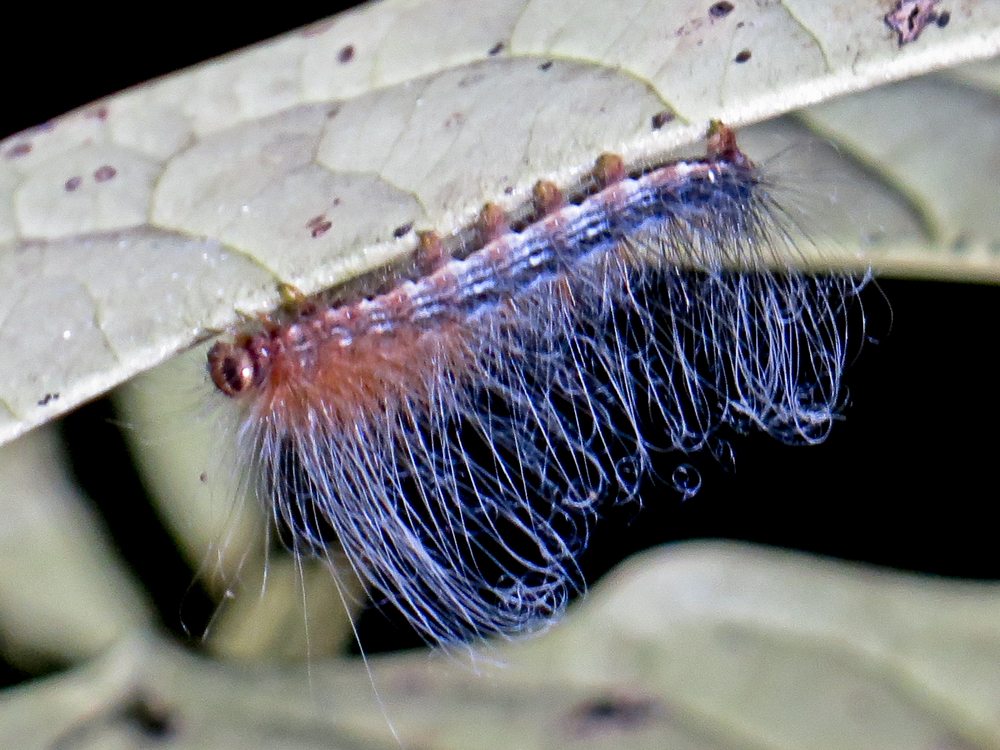 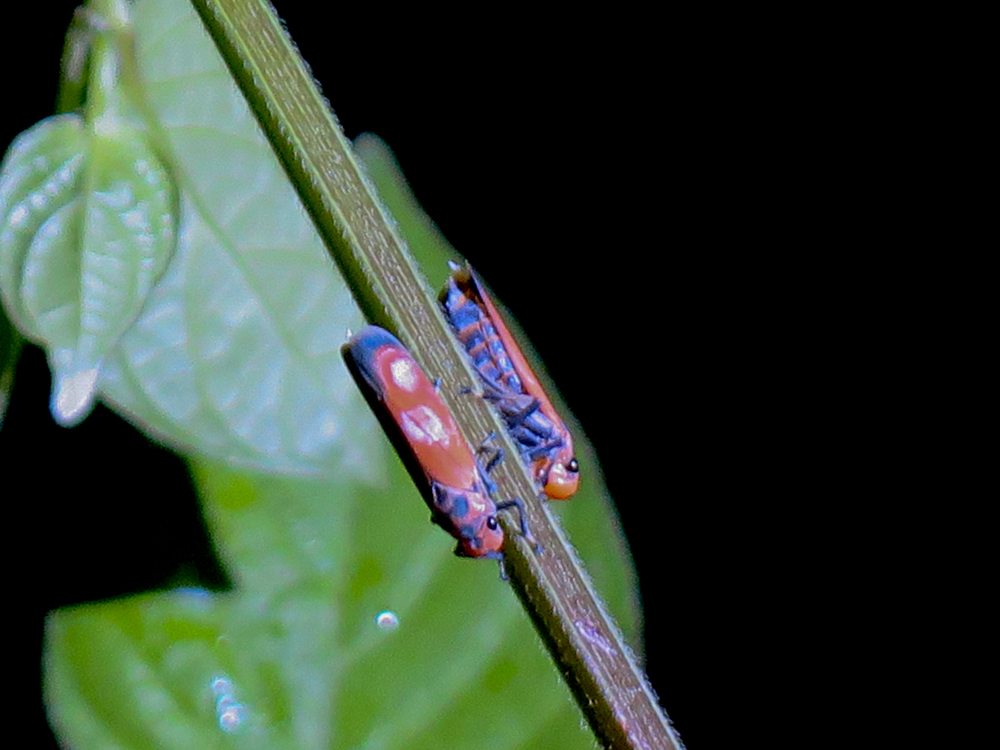 And what about this pair of pink and blue insects – are they a couple or just friends stopped to gossip? 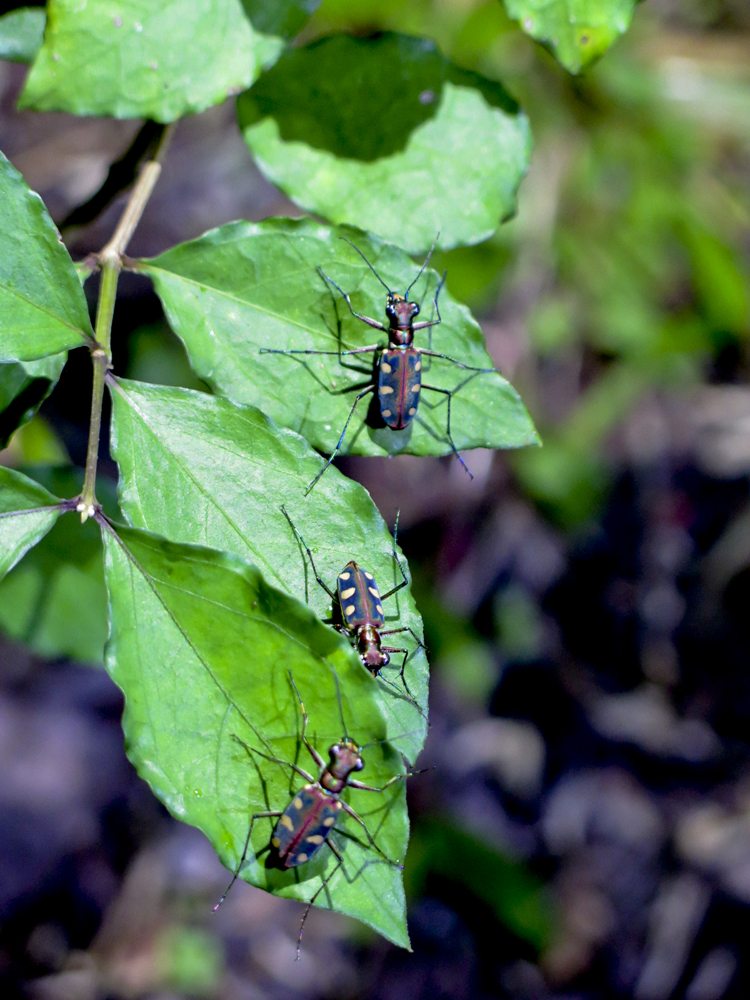 And then there were three Katydids, each to their own leaf 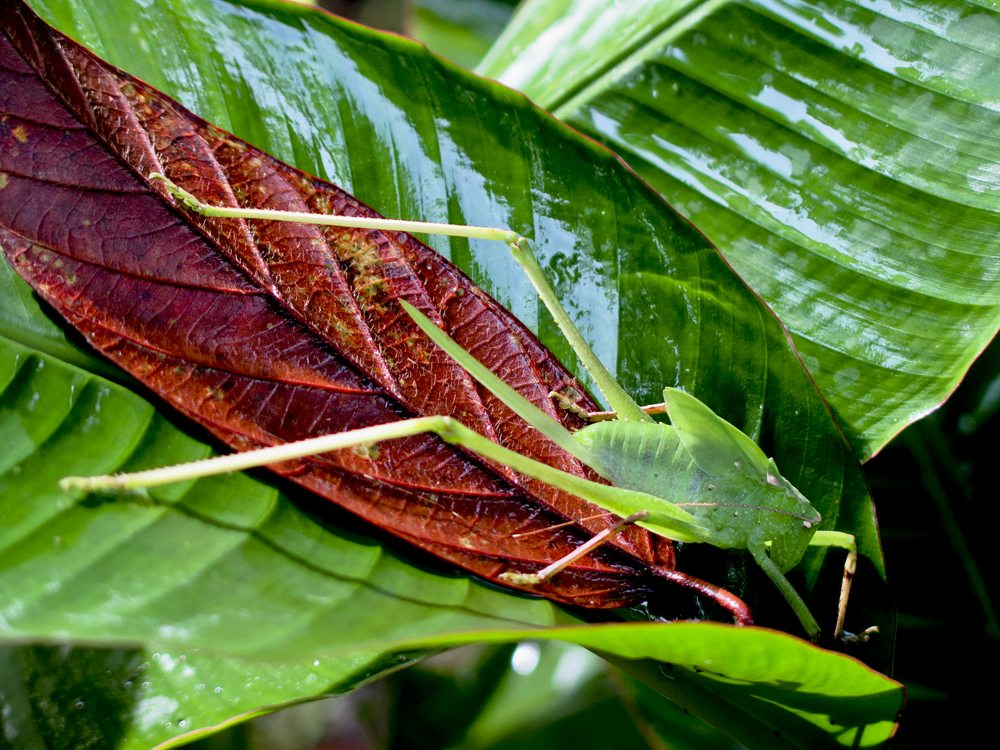 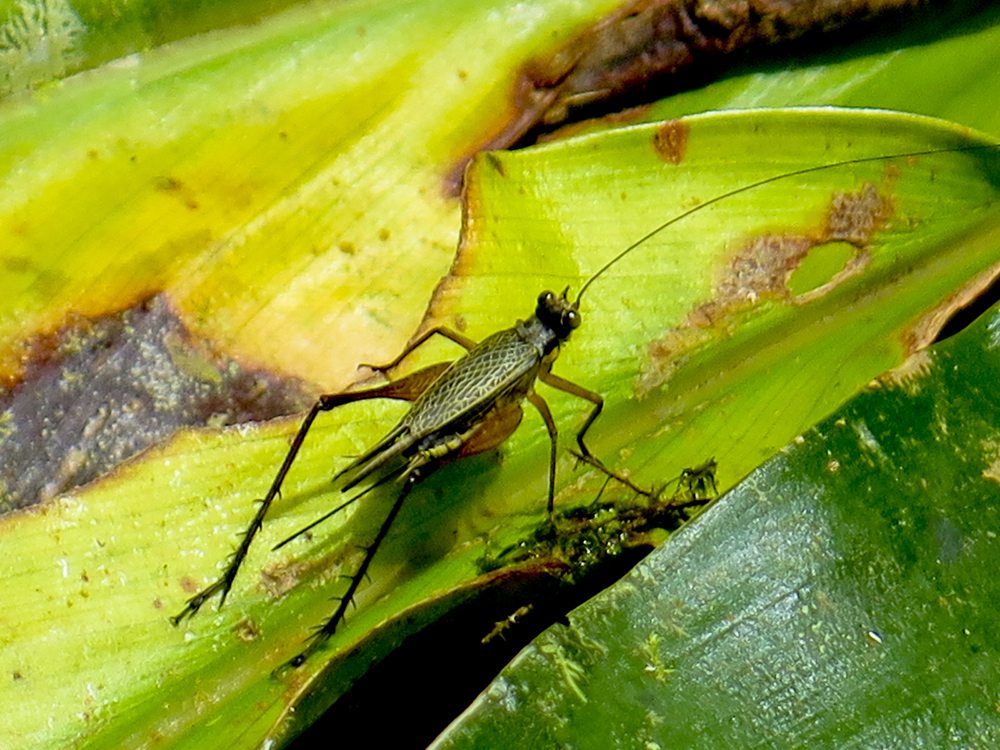 Another cicada, one antenna missing, with his patterned back looking like burnished metal 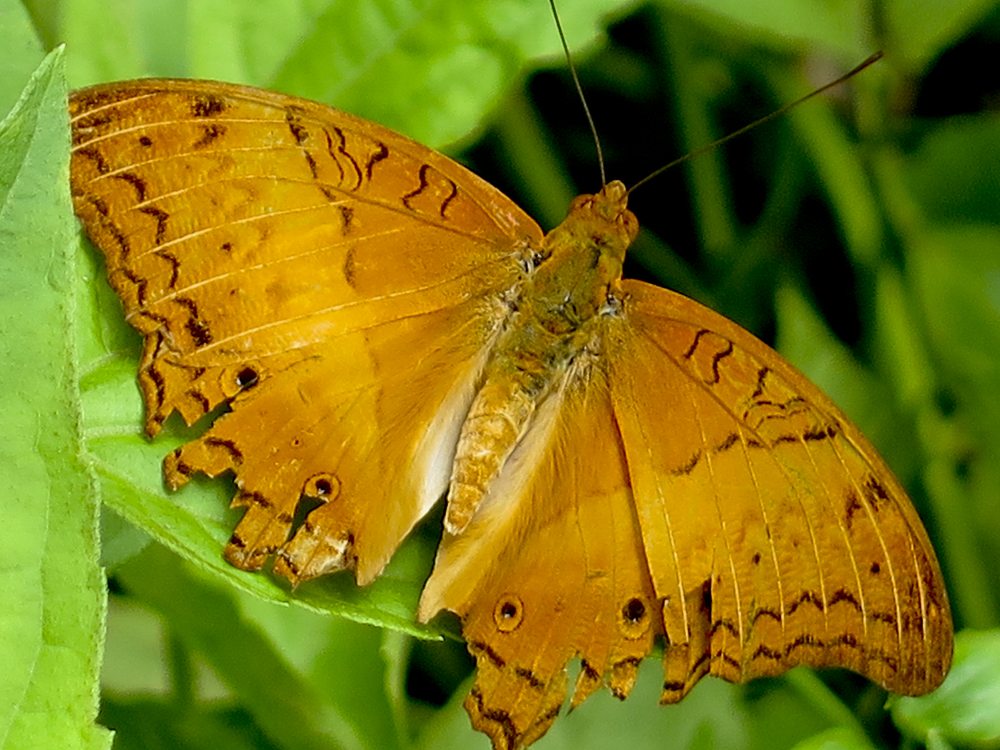 A bright yellow moth, or is it a butterfly, resting among the leaves

And even with little sunlight, there were ferns unfurling and bright wildflowers tucked in between
the rotting branches and the mosses and fungi of the undergrowth. 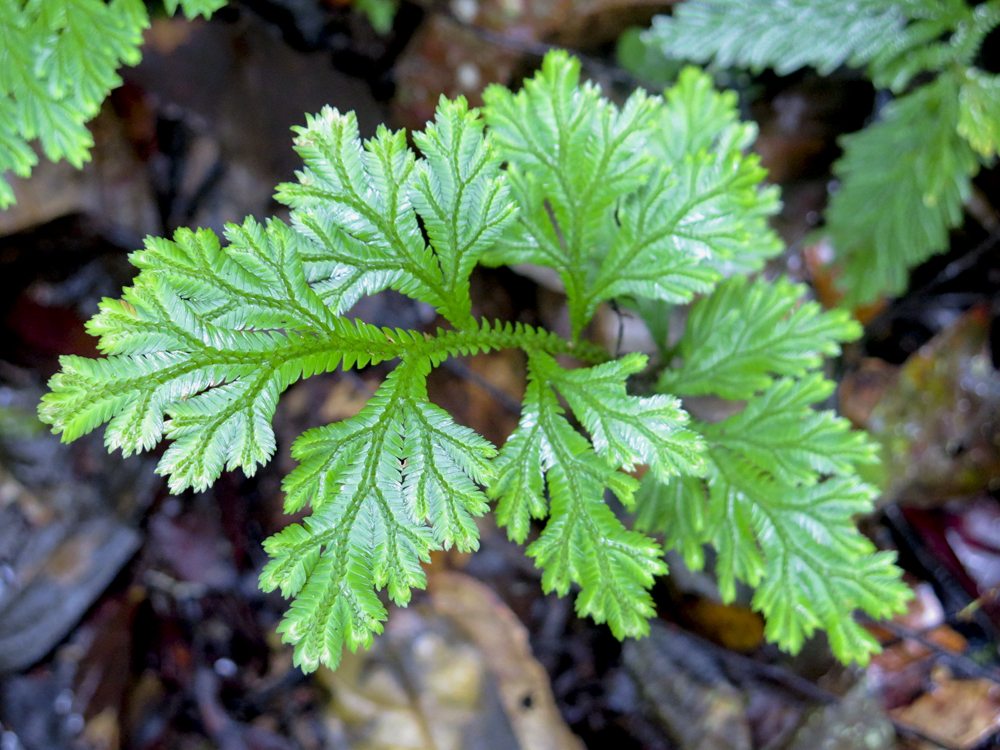 This plant, whose name I can’t remember, is a cross between a fungus and a fern 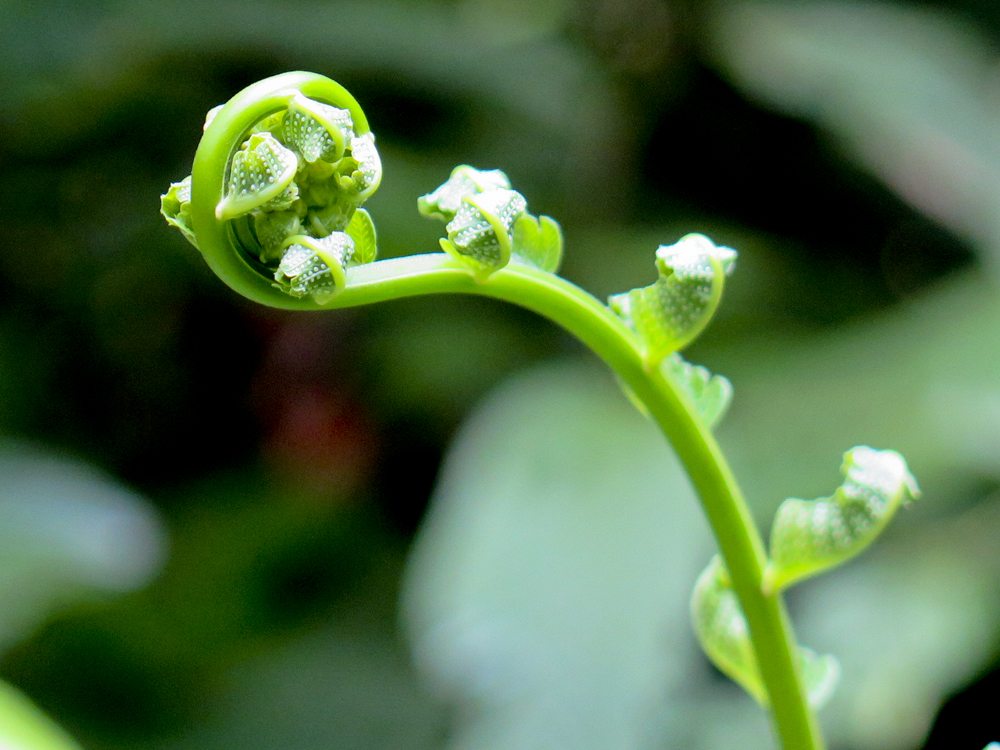 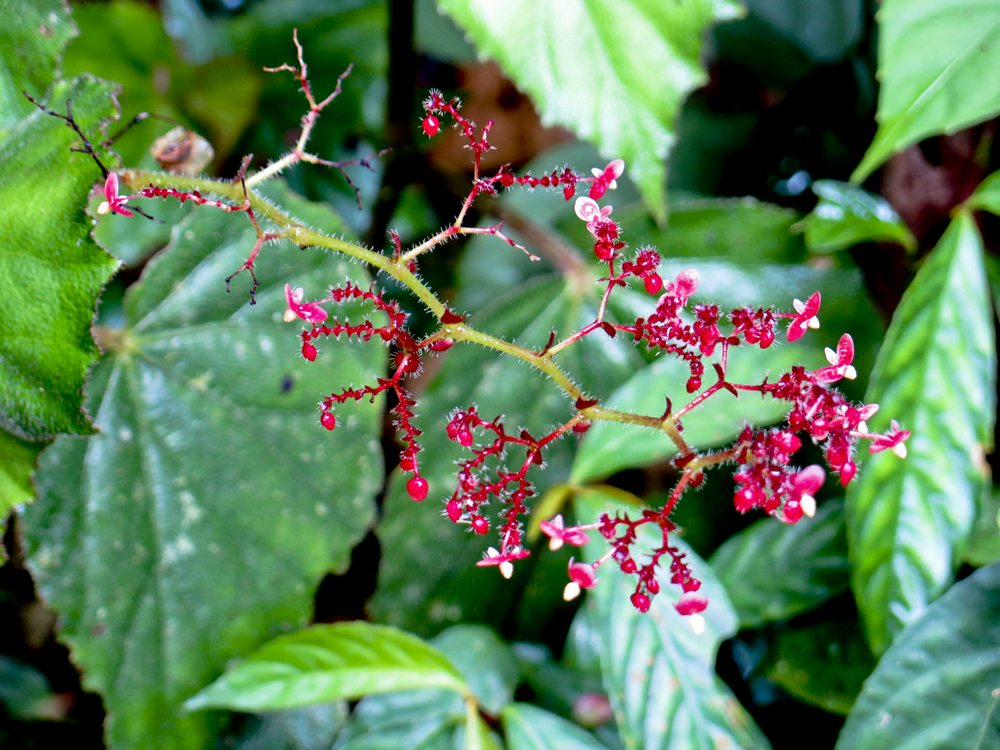 The delicate tendrils of a wild begonia 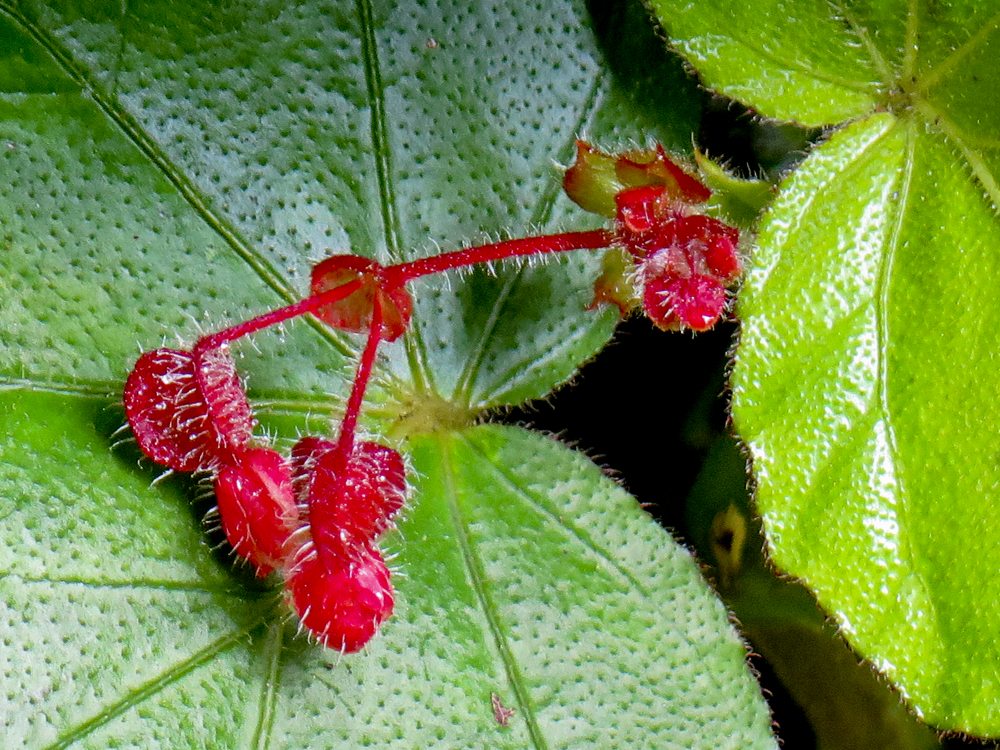 Another wild begonia set against the vibrant greens of its leaves 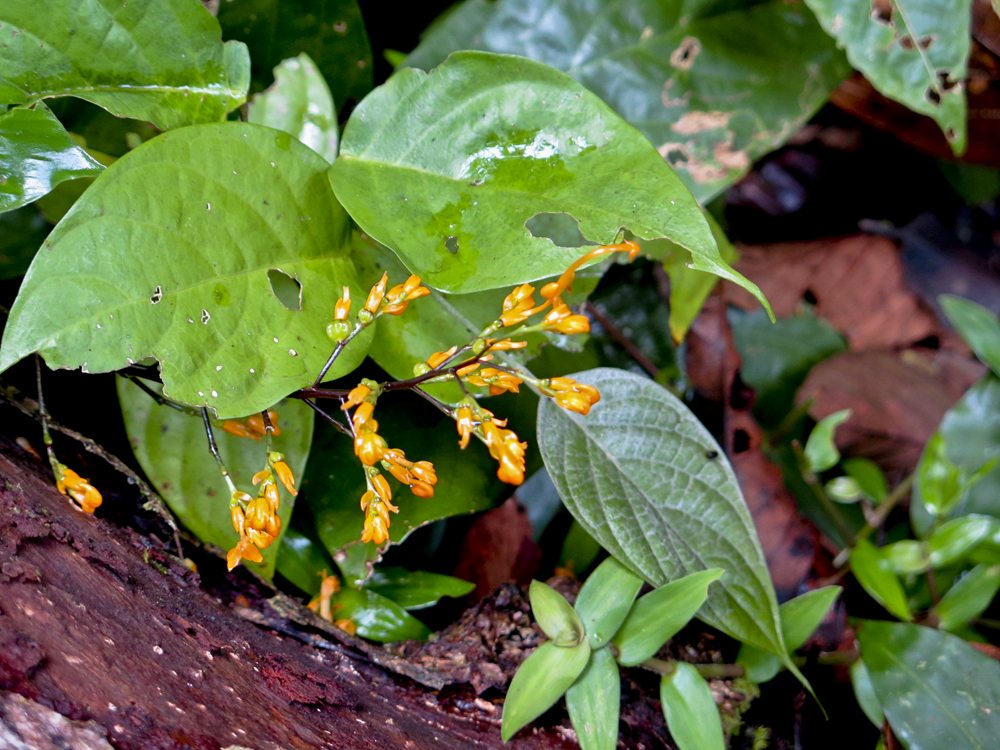 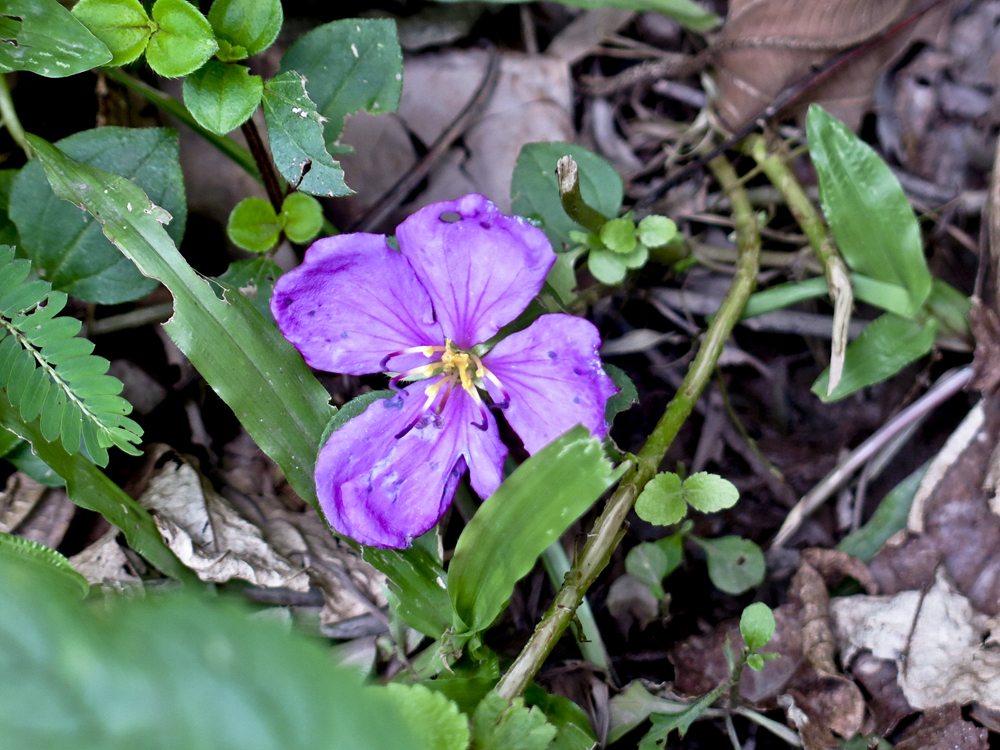 A single purple bloom emerging from the stems and dead plants 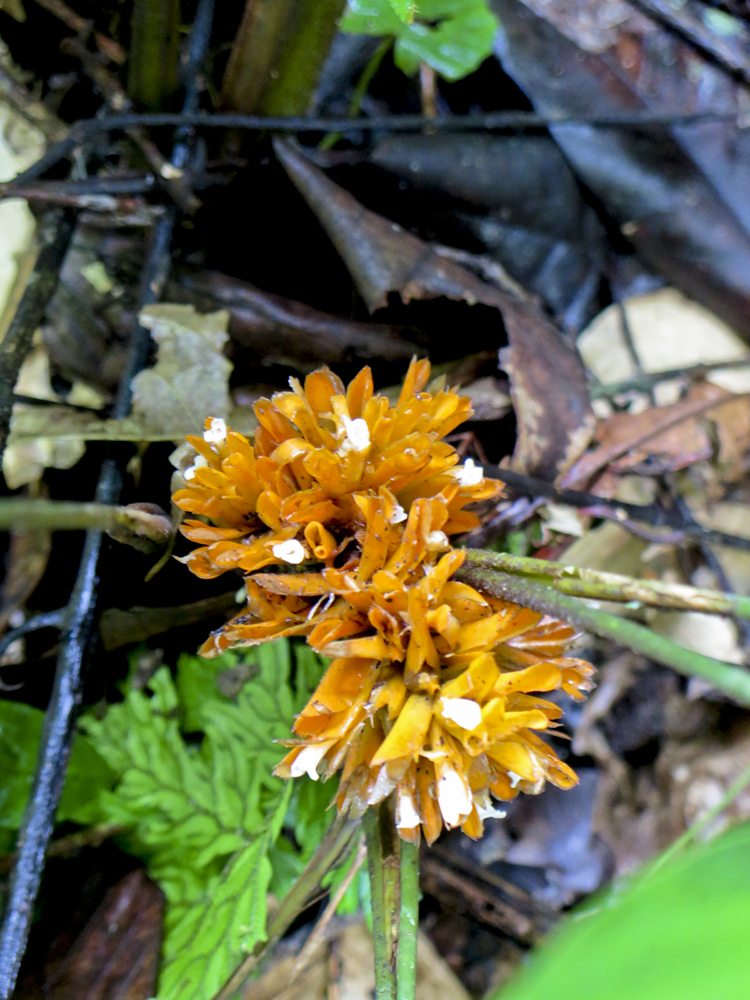 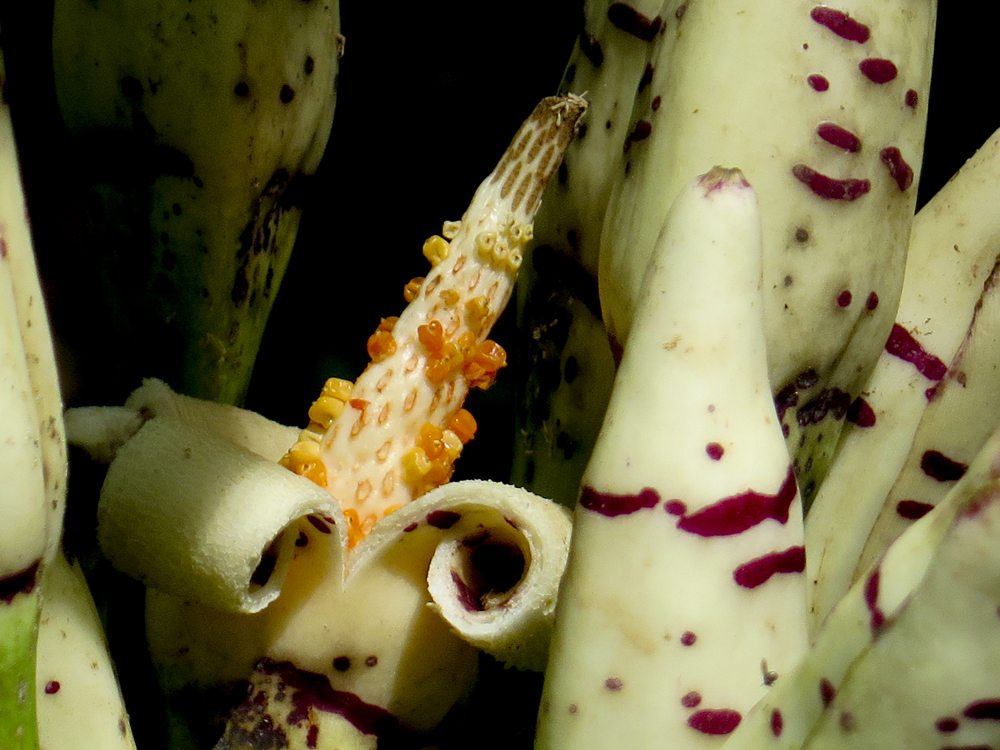 A beautiful waxy plant curling open to expose its stamen

And finally on some of our evening walks through the rain forest we not only heard, but were able to spot a couple of frogs
and with the aid of a spotlight managed to capture their colours and bulging eyes. 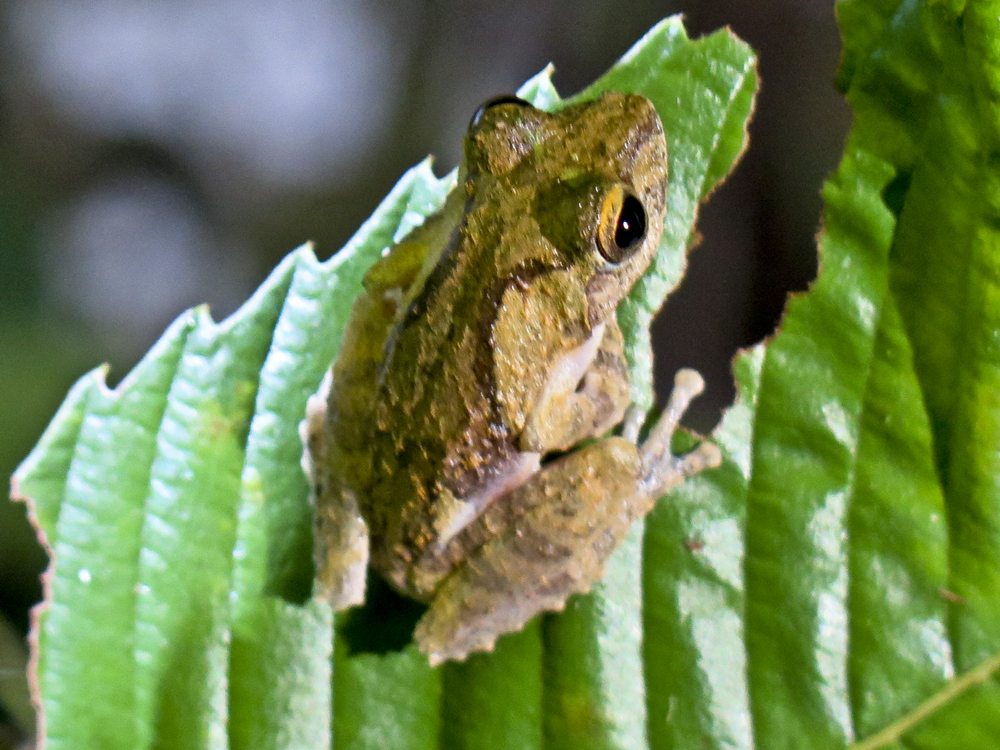 Only the eyes in focus, but this frog’s markings also clearly visible 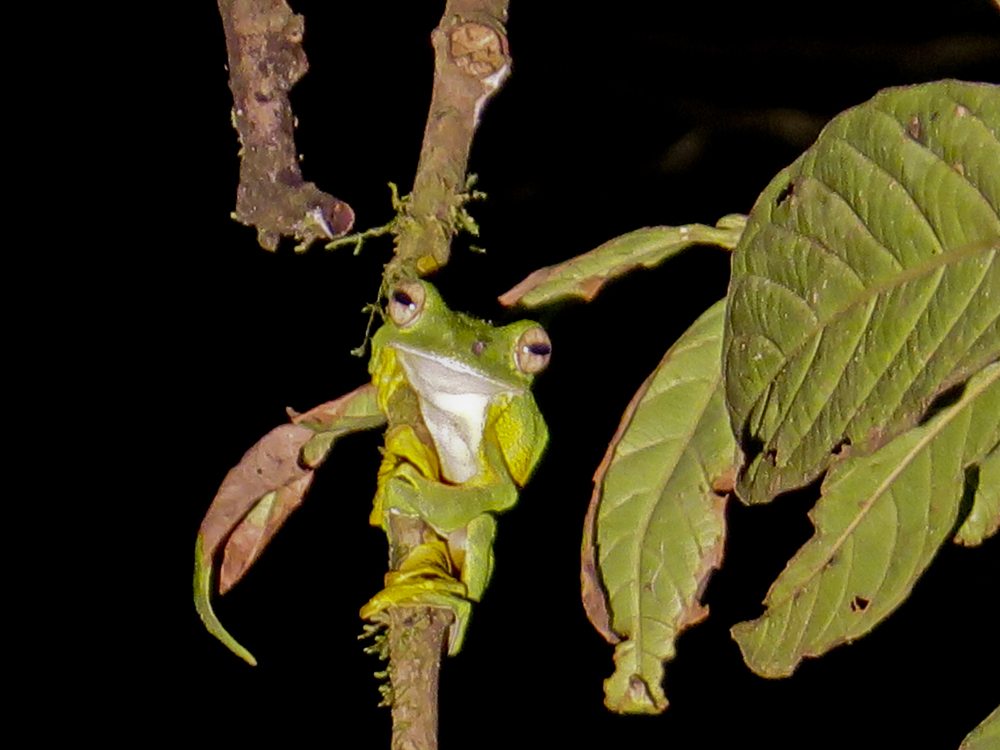 So that was it for my discoveries of the forest floor, the plants and animals certainly not as dramatic as the previous post with the
elephants, alligator, birds, monkeys and orangutans, but equally interesting in their detail and diversity.

My next and last blog from my Sabah trip, coming soon, will feature a Baja Laut Sea Gypsy village.