“Greenland is a massive island and autonomous Danish territory lying between the North Atlantic and Arctic oceans. It is about 80% covered in ice and most of its small population lives along the ice-free, fjord-lined coast, particularly in the southwest. Greenland’s northerly position, largely above the Arctic Circle, results in natural phenomena such as summer’s midnight sun and winter’s Northern Lights.

I traveled to Greenland in 2014, and was utterly captivated by this fascinating island. Based in Ilulisat, the country’s third largest and most popular tourist destination, with its brightly painted houses, I enjoyed evening walks through the town after days spent out on the water. We visited villages along the coast learning about life there in the summer and winter seasons, their festivals and daily challenges. We spent a day near the massive Eqi Glacier, 350 metres high and 3 km wide, listening to the crack and roar of it’s movement and seeing great chunks of ice calving from it at regular intervals. Observing the ever-changing colours and shapes of the icebergs from the shore as well as from the boats, was magical.

Flying over the Icecap en route to Iceland we were treated to stunning view of lakes, fjords and glaciers, mountains and valleys with snow and ice patterns carved by wind and craggy, underlying terrain.” Joanna MacLean 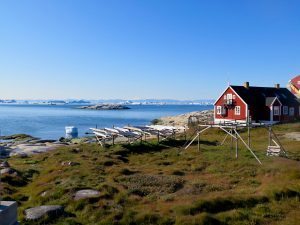 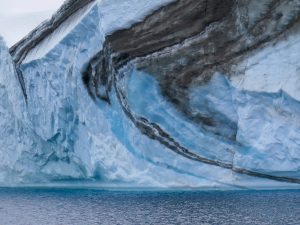