The start of our journey along the Mediterranean Coast, often referred to as the Turquoise Coast, began in Antalya, now one of Türkiye’s premier resort areas with a majestic coastline and a backdrop of the towering Taurus Mountains. Although there had been successive habitations at this site, the city was founded in 159 BC by King Attalus II, a Pergamom King, and prospered during the Roman and Byzantium eras and then came under Ottoman rule in 1390. Today, the most important ancient remains are the Roman city walls and an imposing Hadrian’s gate. However, our itinerary did not include visiting the city other than to have a delicious lunch, but that was only after we had done our first hike and ‘discovered’ our first ancient site.

The Acropolis of Termessos is located within the 1000-metre high Mount Gulluk National Park, some 30 km to the north-west of Antalya. After a short bus ride and a refreshing cup of tea with snacks, we enjoyed a steep climb up a winding, rocky path through a pine and holly oak forest to the jumbled ruins of the ancient city. 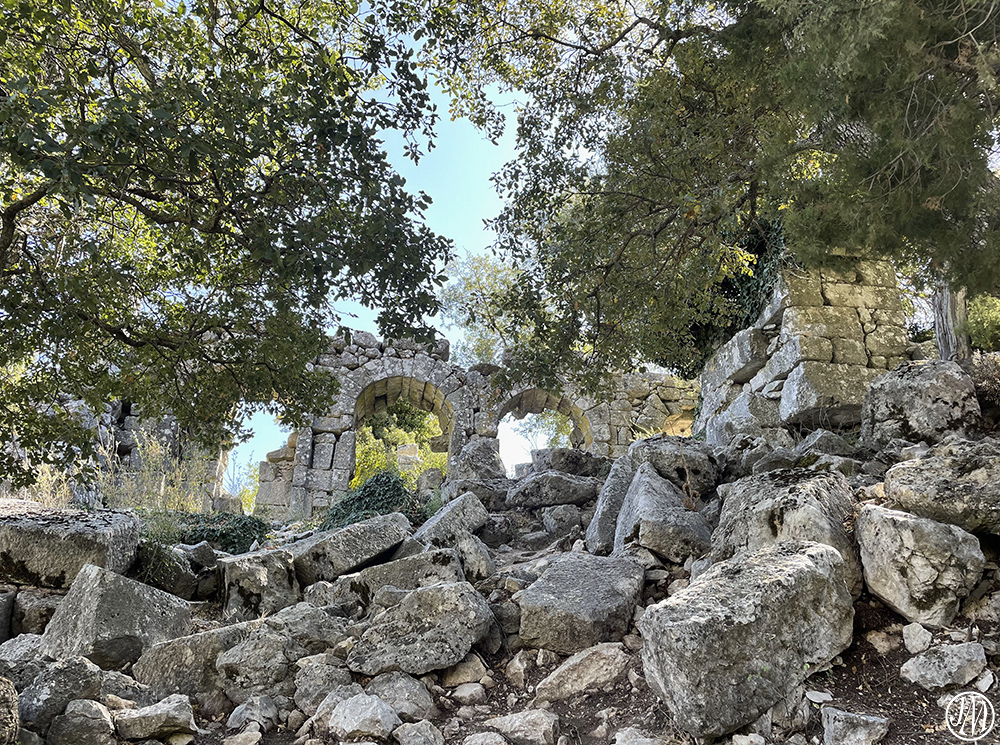 Massive stone blocks and the remains of a series of  arches

Surrounded by high cliffs and in a strategic position on the shipping route to the Aegean, the city’s formidable natural defenses convinced Alexander the Great not to attempt to take the city during the 4th Century BC.    Although first established centuries earlier, Termessos came into its own during the Hellenistic period, and subsequently established good relations with Rome, joining the Roman Alliance in 189 BC. 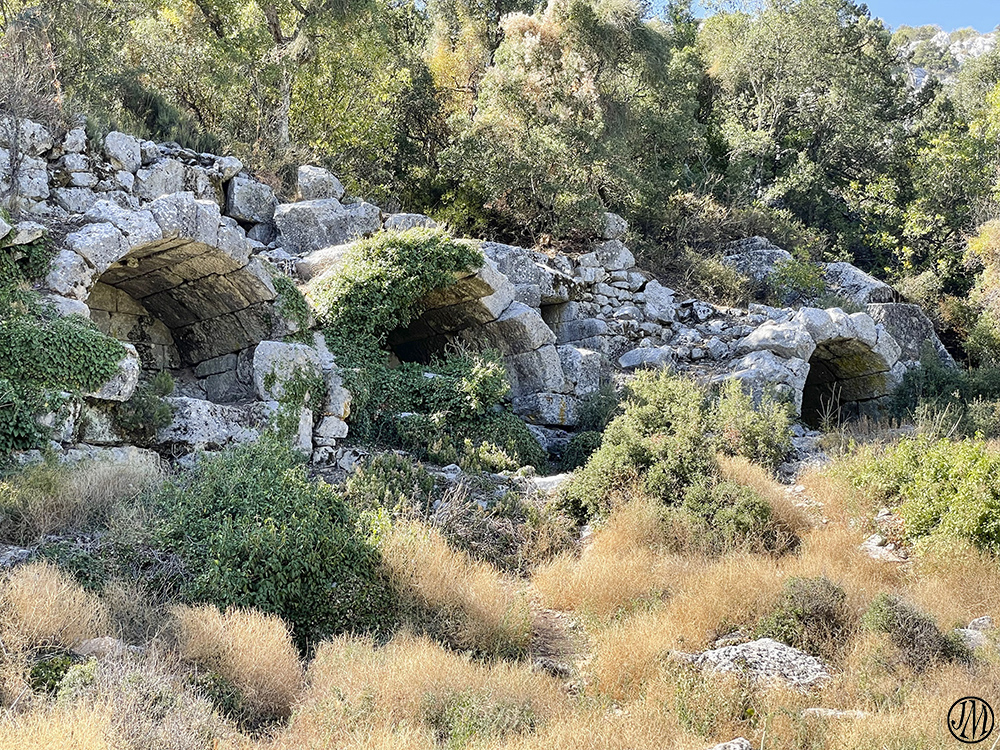 The elegant remains of shops lining the agora (market place) 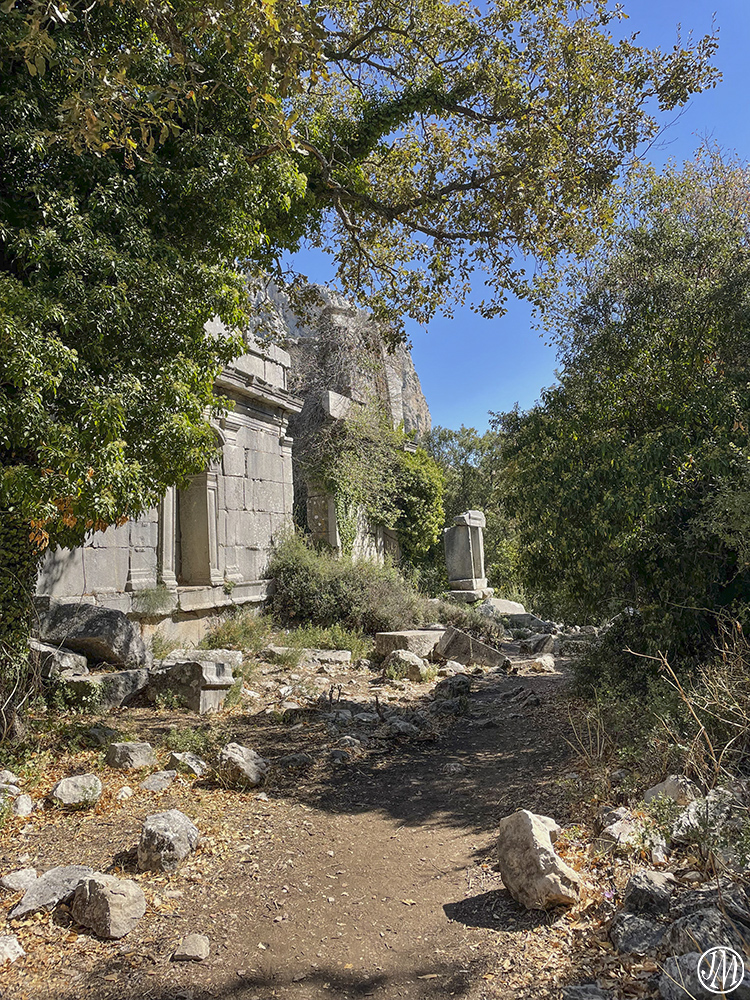 The remaining wall and an entrance to a Corinthian Temple 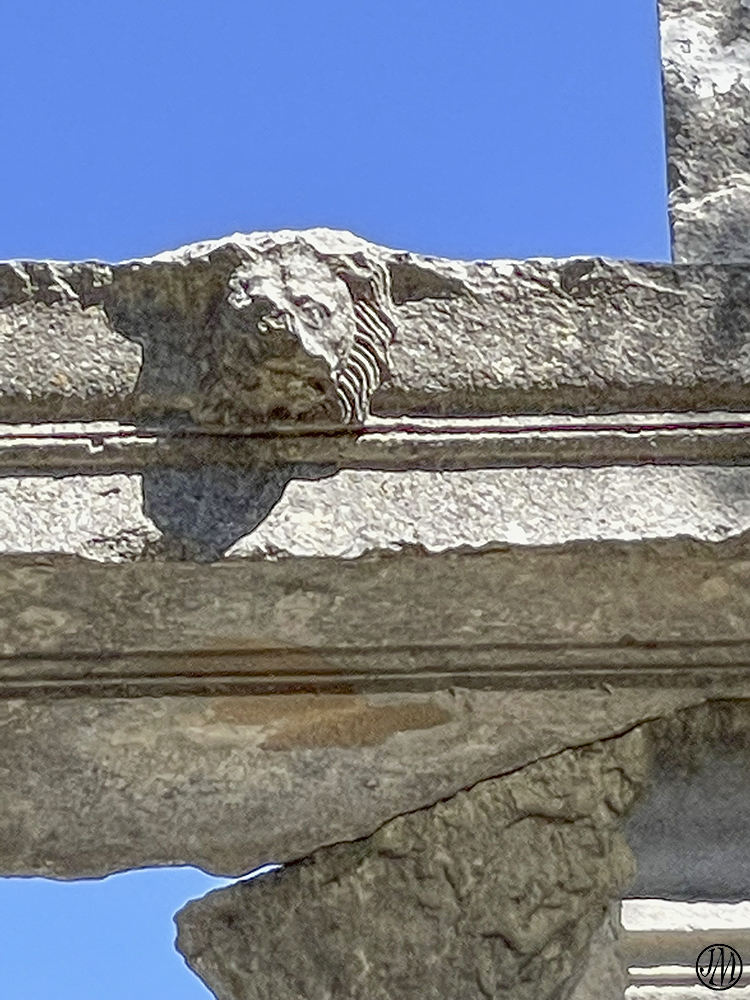 A weathered, but still identifiable lion’s head on a lintel 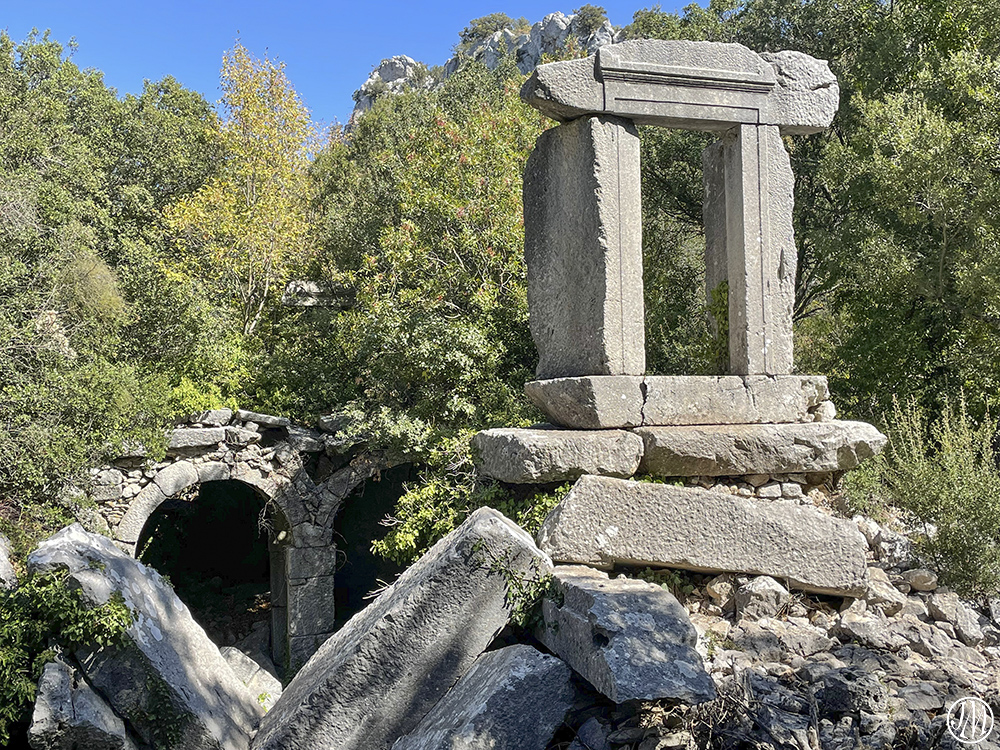 An imposing gateway to the temple with arches behind 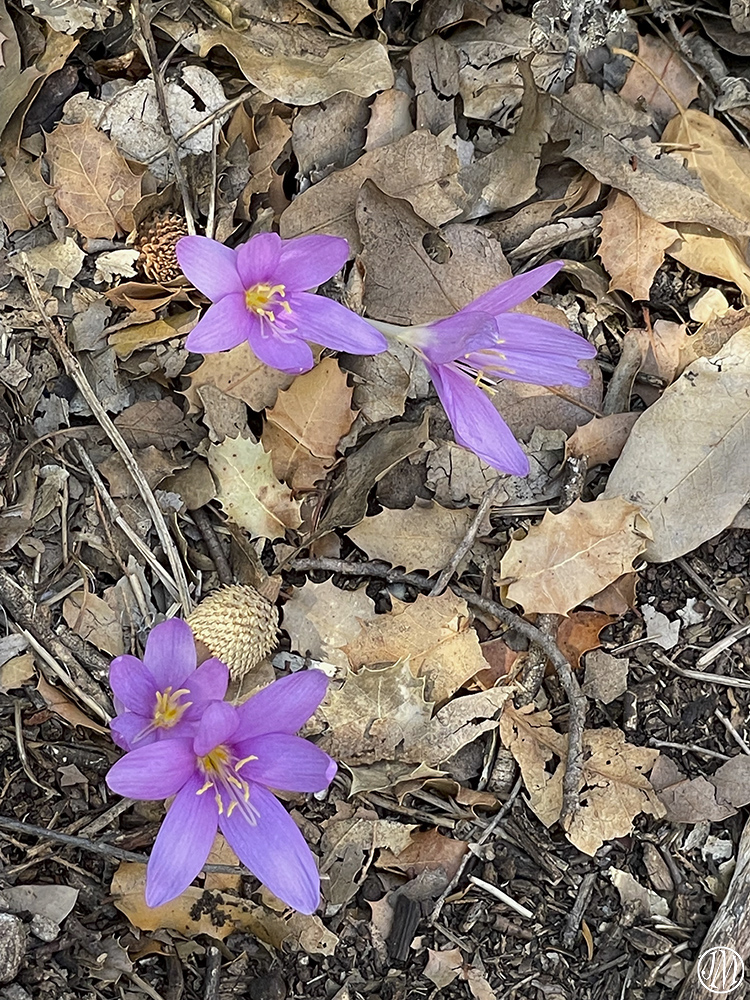 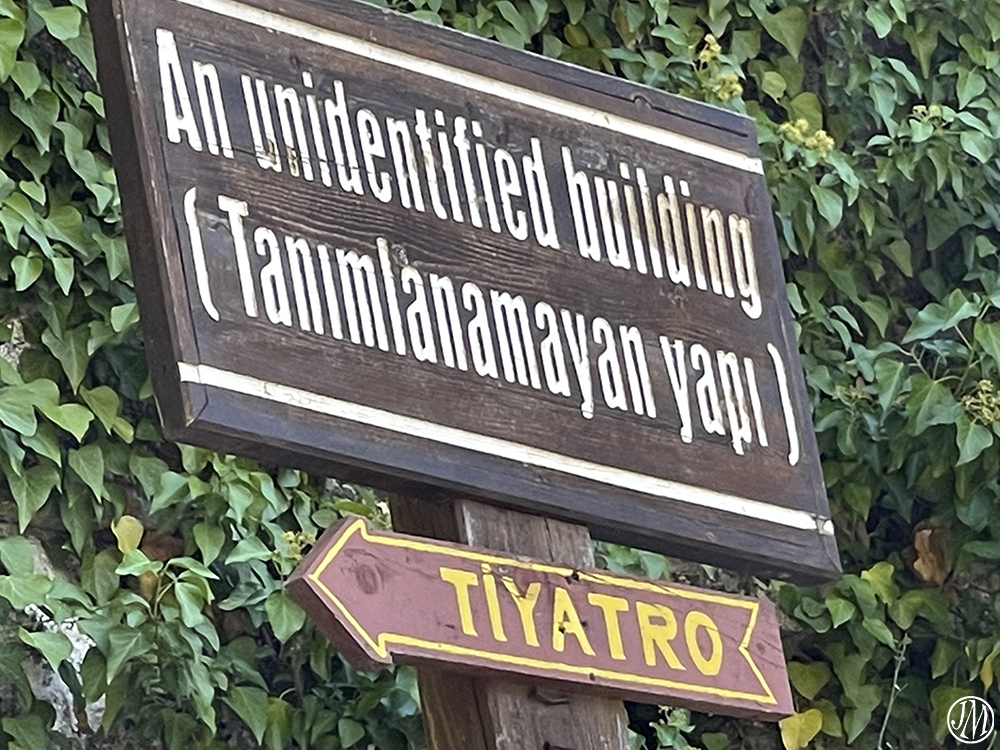 Not a very useful signboard amid the ruins, but it did indicate the direction of the theatre

It was a bit of a steep climb and more piles of scattered blocks and columns to be clambered over until we caught a glimpse of the top of the theatre seating with high cliffs behind and the blue of the Mediterranean sea merging with the clear blue sky in the distance. 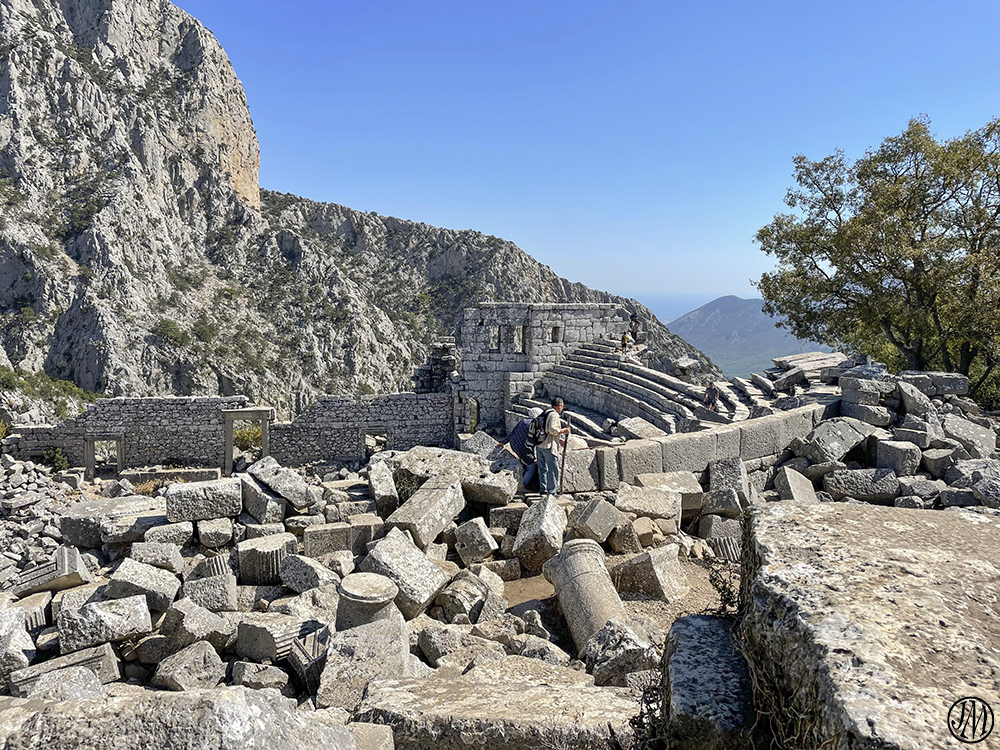 A wow moment – first view of the theatre

Although little of the site has been excavated, the theatre is well preserved, with the seating showing characteristics of the Hellenistic era while the stage structure sports features of the Roman period.  The seating rows face the valley with both sides leaning into the hillside and are reinforced by retaining walls. The theatre had a capacity for more than 4,000 and the hollowed pits on the rows where tent poles were erected in order to protect the audience from the sun are still visible. 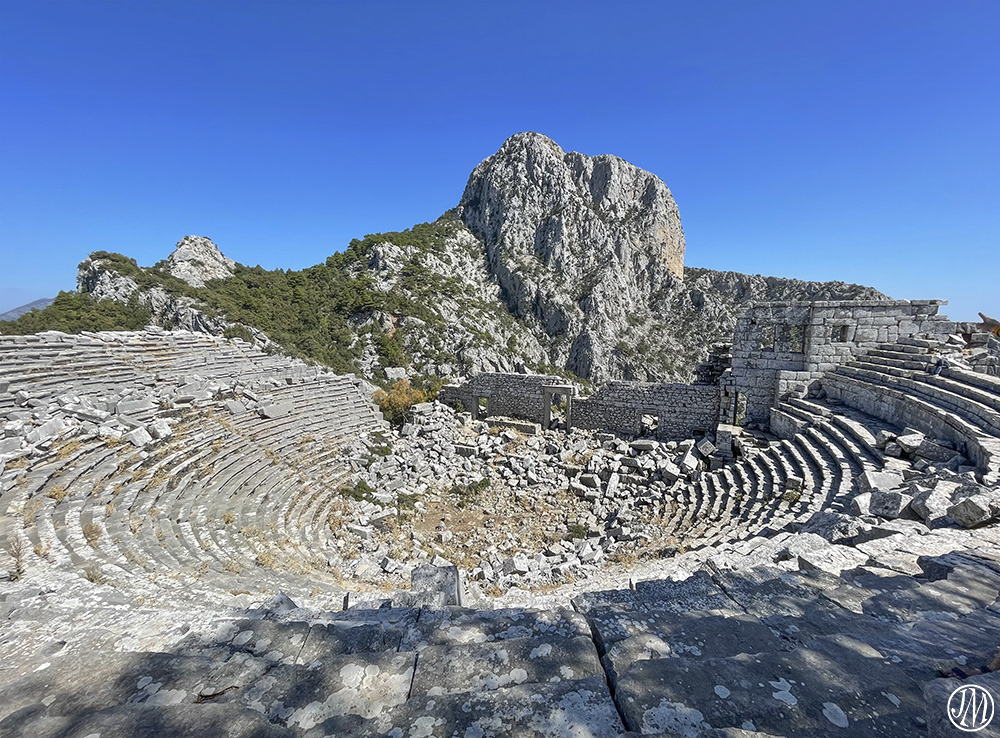 Looking down into the well of the theatre

Impressed by our visit and guided tour of Termessos in the morning, and replete from a delicious lunch, we visited the Antalya’s splendid Archaeological Museum with time to browse through its fascinating and well-presented artifacts and its particularly impressive collection of Roman marble sculptures dating from the 2nd century AD.  Below I am showing a number of the items from the museum, not all accurately identified but which give a glimpse of the richness of the archaeological finds from this area. 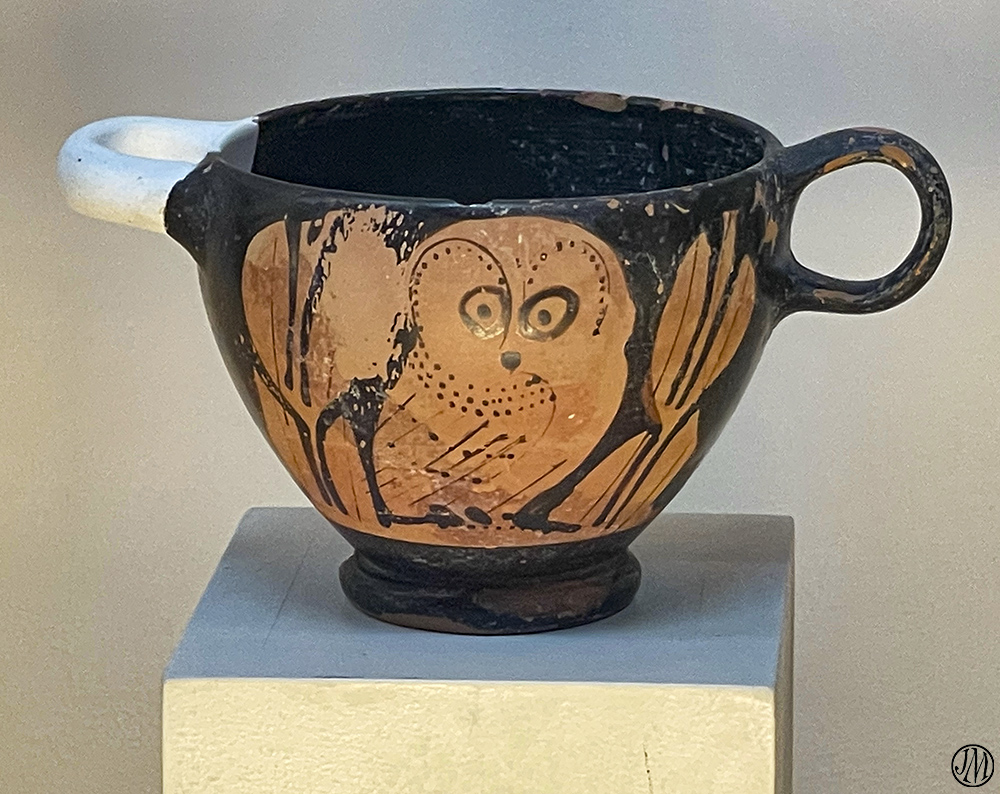 A Hellenic-style terracotta vessel featuring an owl, a symbol of wisdom 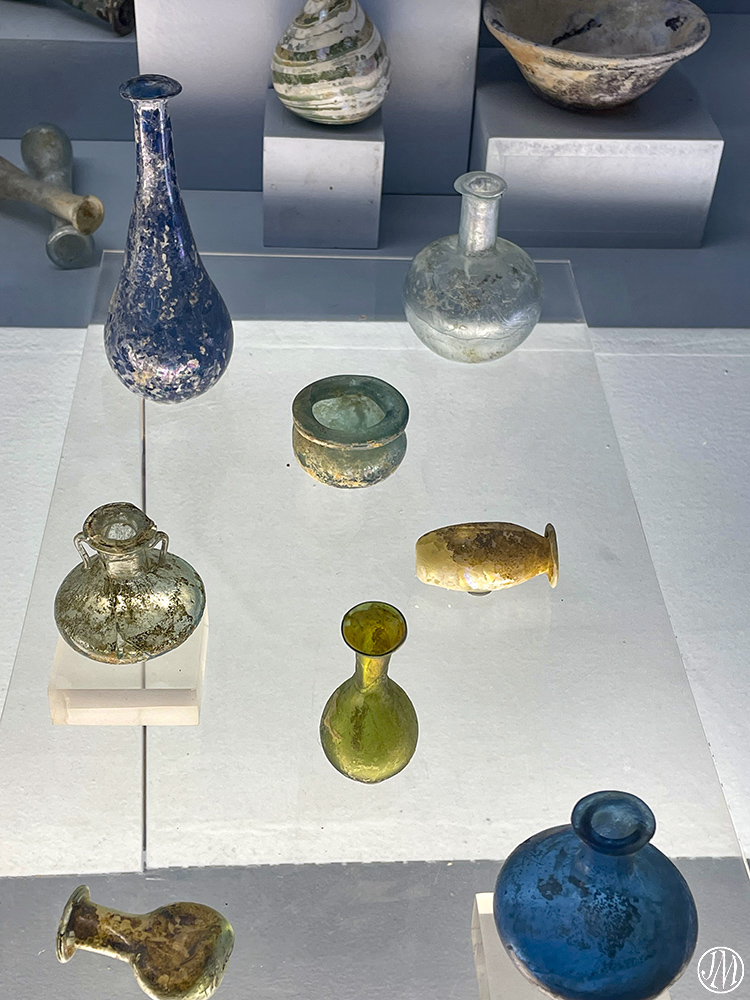 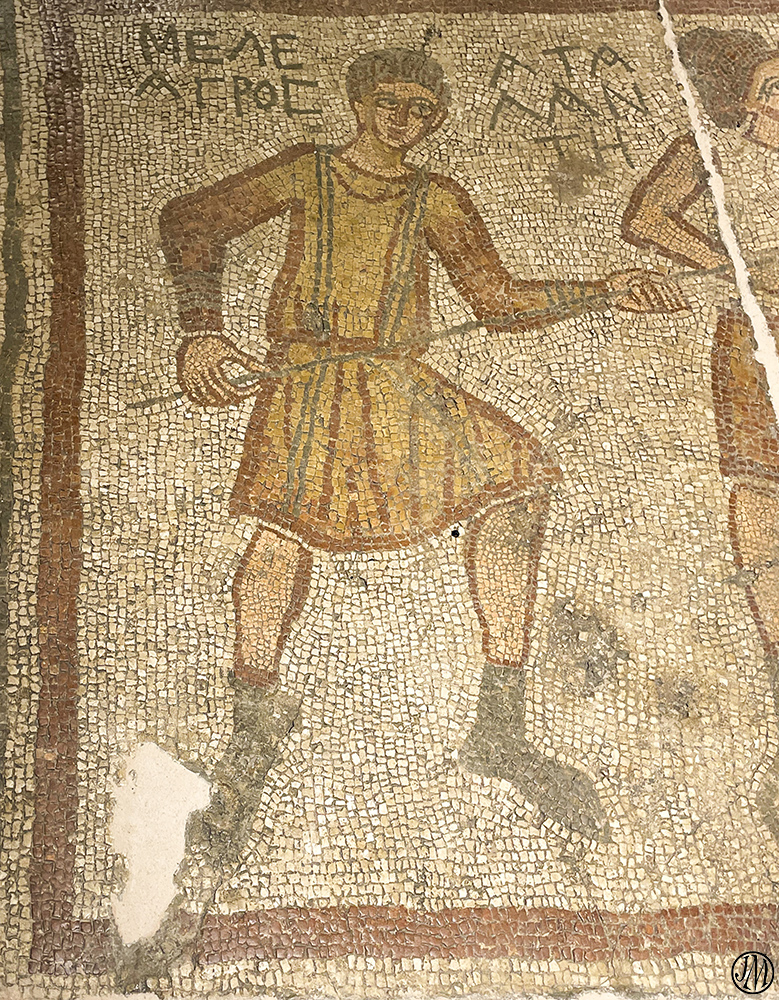 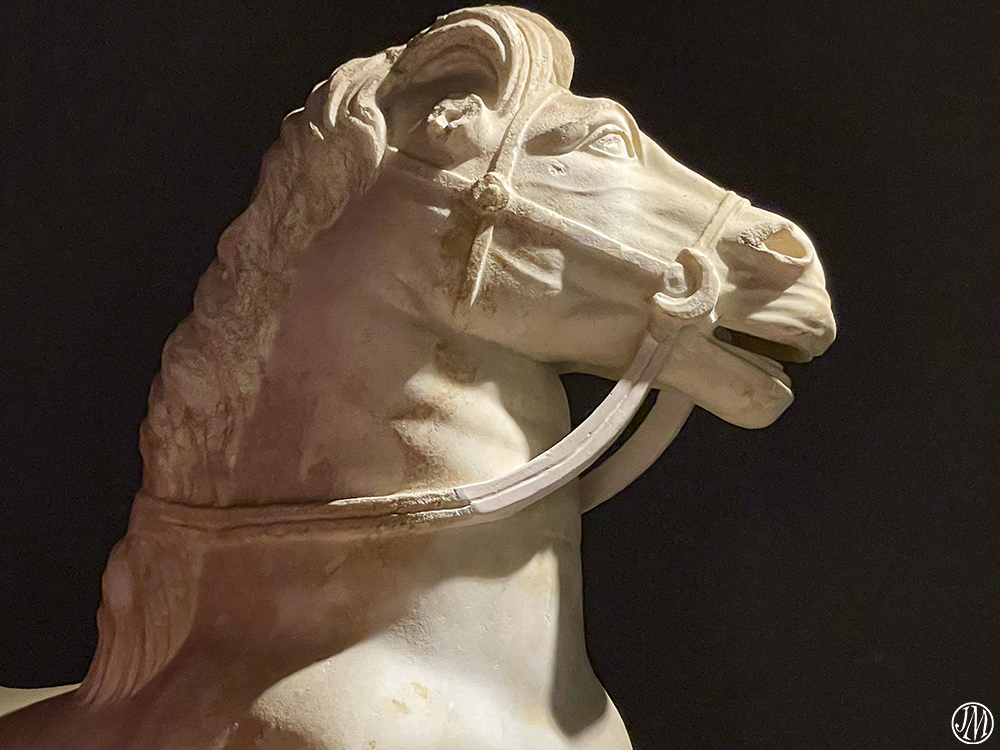 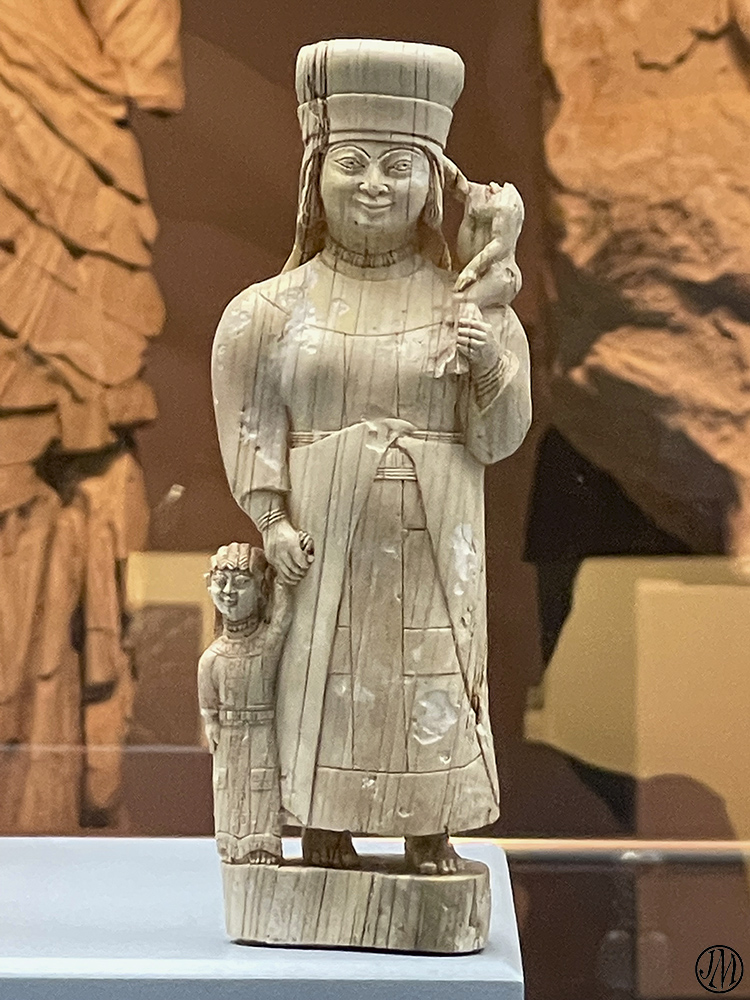 A delicately carved ivory figure just 17cm tall, of a woman holding the hand of a little girl
and carrying a naked boy on her shoulder, symbolizes the Mother Goddess.

The marble statues, many of which were larger than life-size were magnificent, and at the risk of overdoing the photos, I have just shown a small number of the many that were exhibited. They were housed in the Hall of the Gods and the Emperor’s Gallery, with most being dated to the 2nd Century AD. 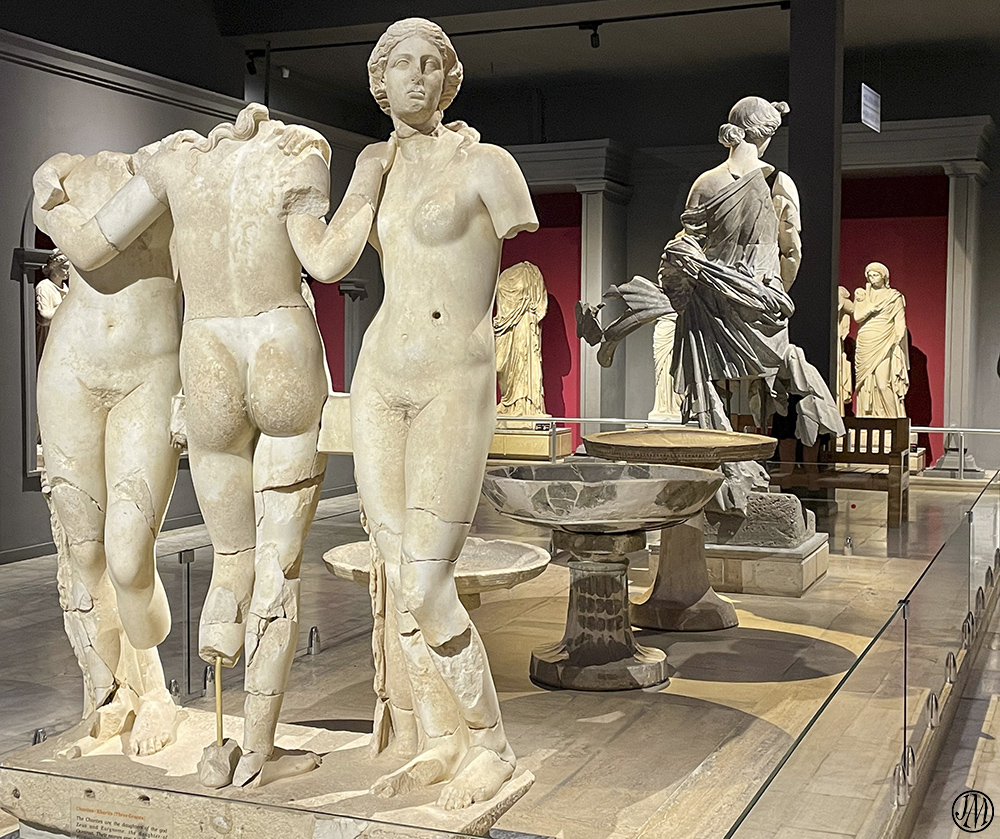 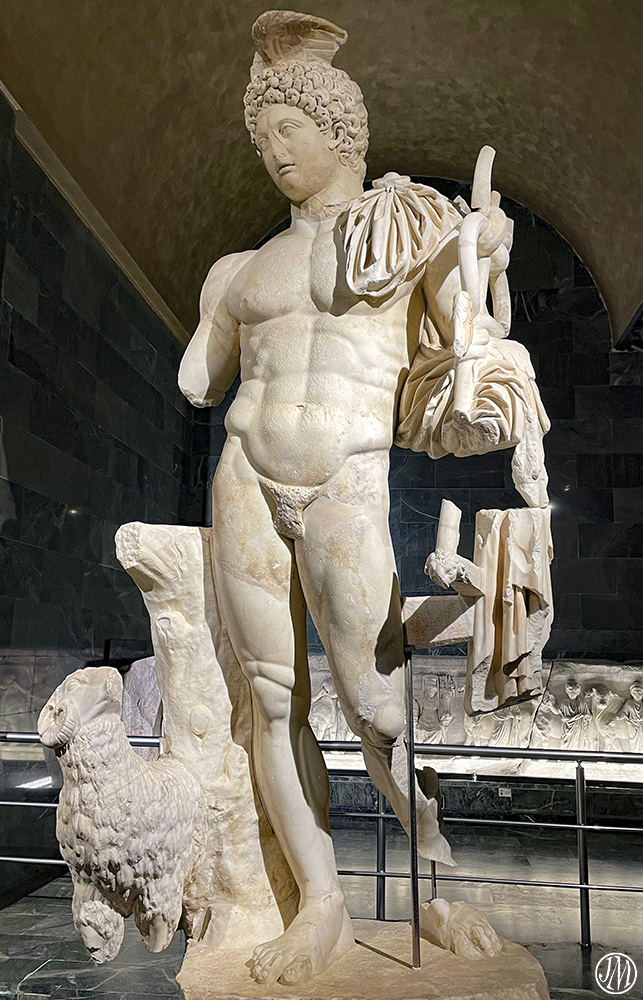 Hermes (with wings on his head), the God of Communication, commerce, merchants, and roads 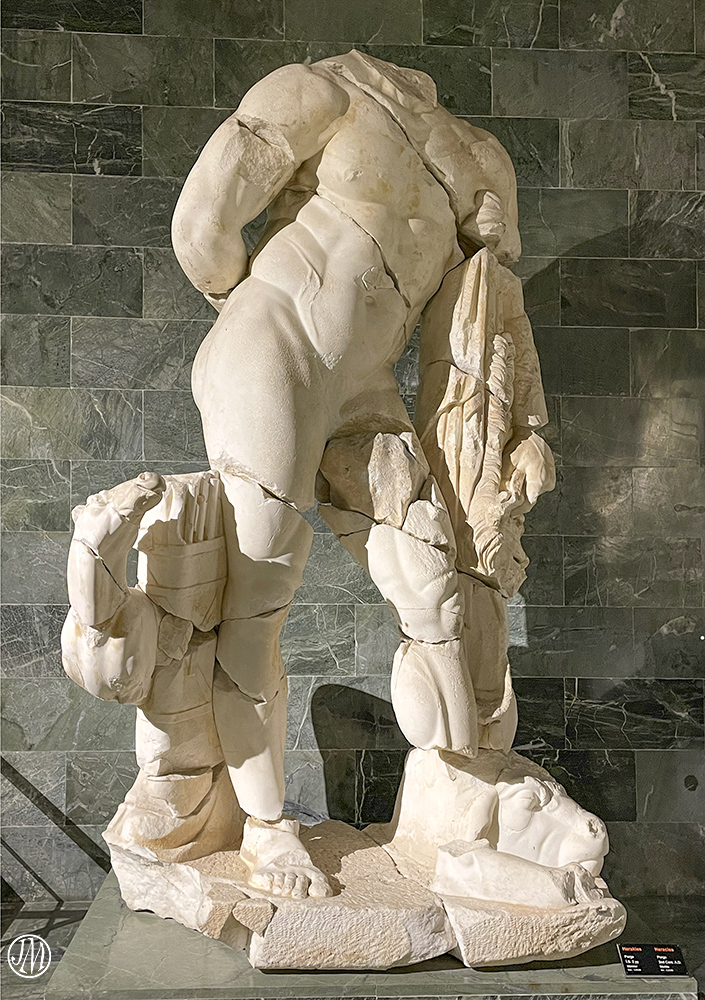 And no other than Hercules 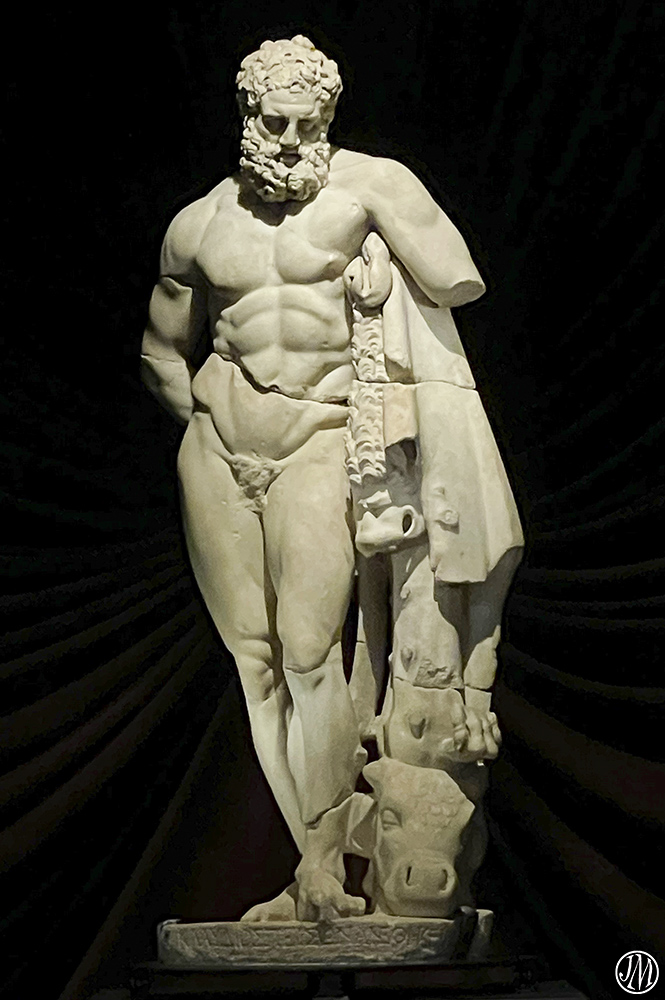 Not sure who this beautiful man is, but perhaps also Hercules with the slain bull beneath him

Also on display were some magnificent Sarcophagi with intricate designs, columns and figures telling stories of great feats carved into the sides.  Several of them are shown below.  The museum warranted more time. 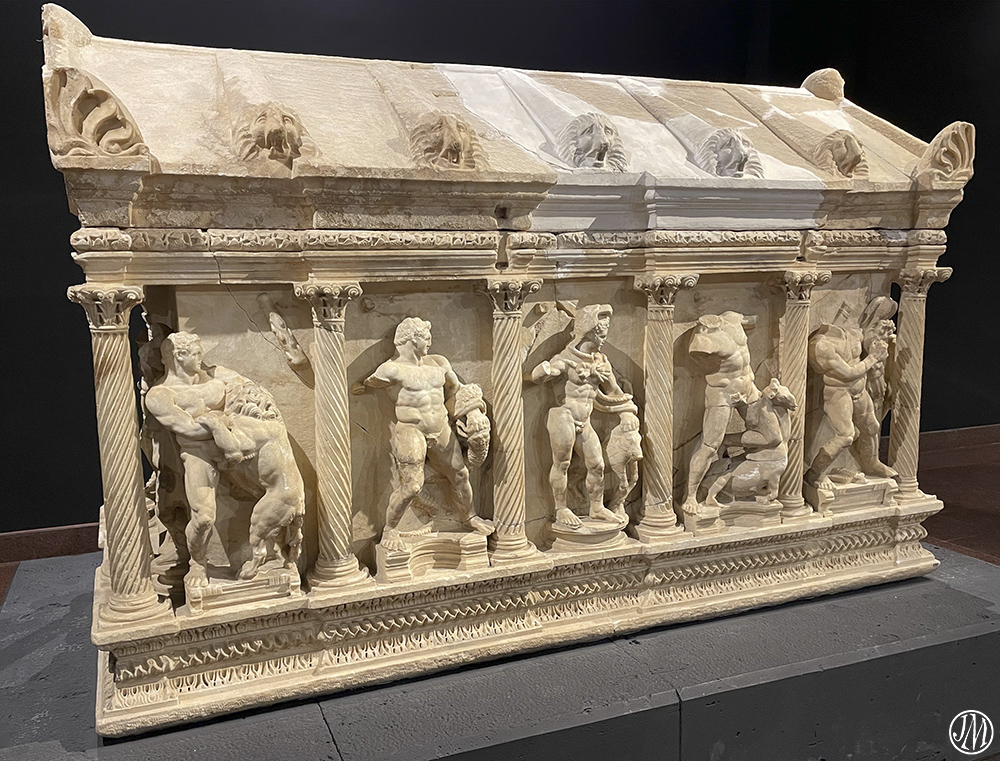 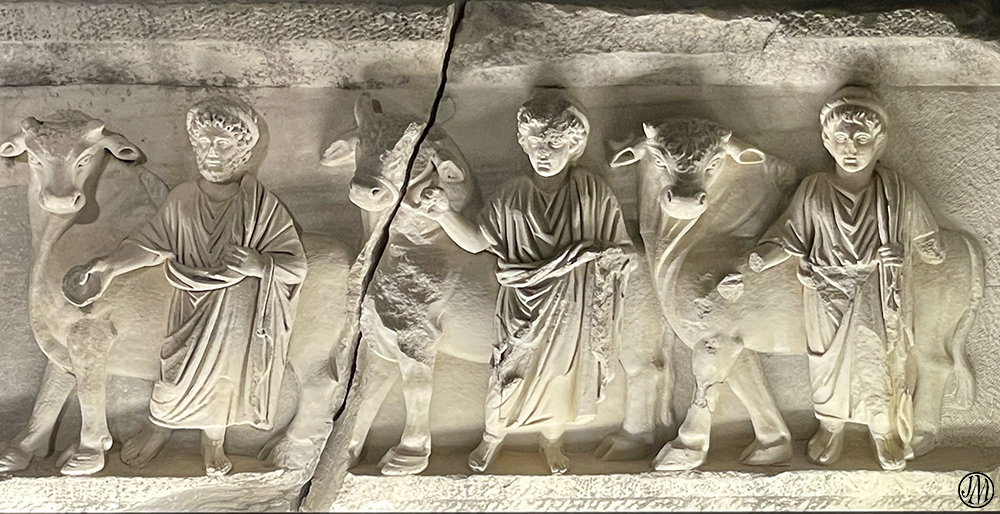 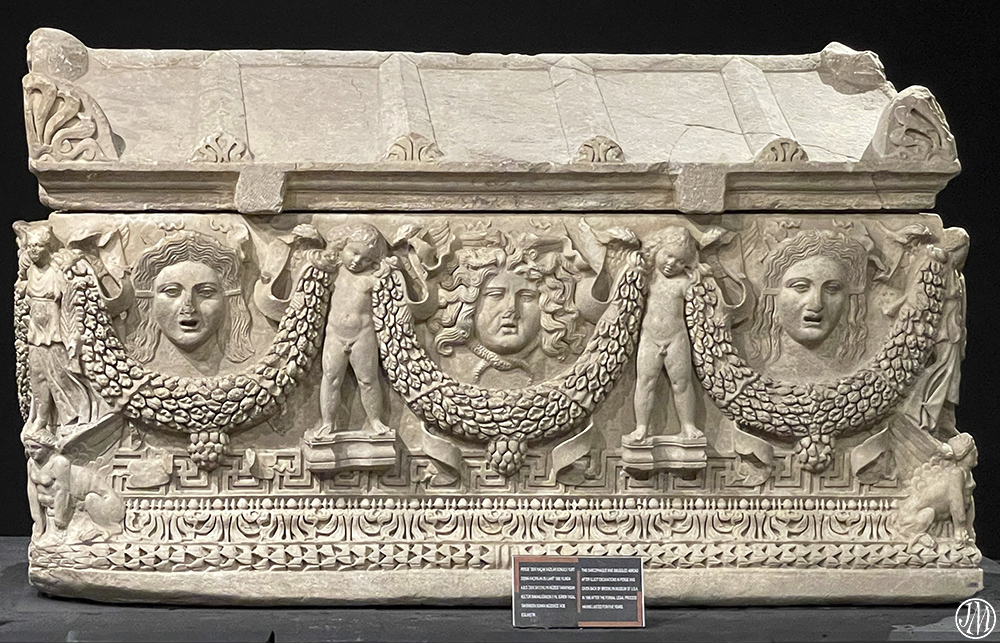 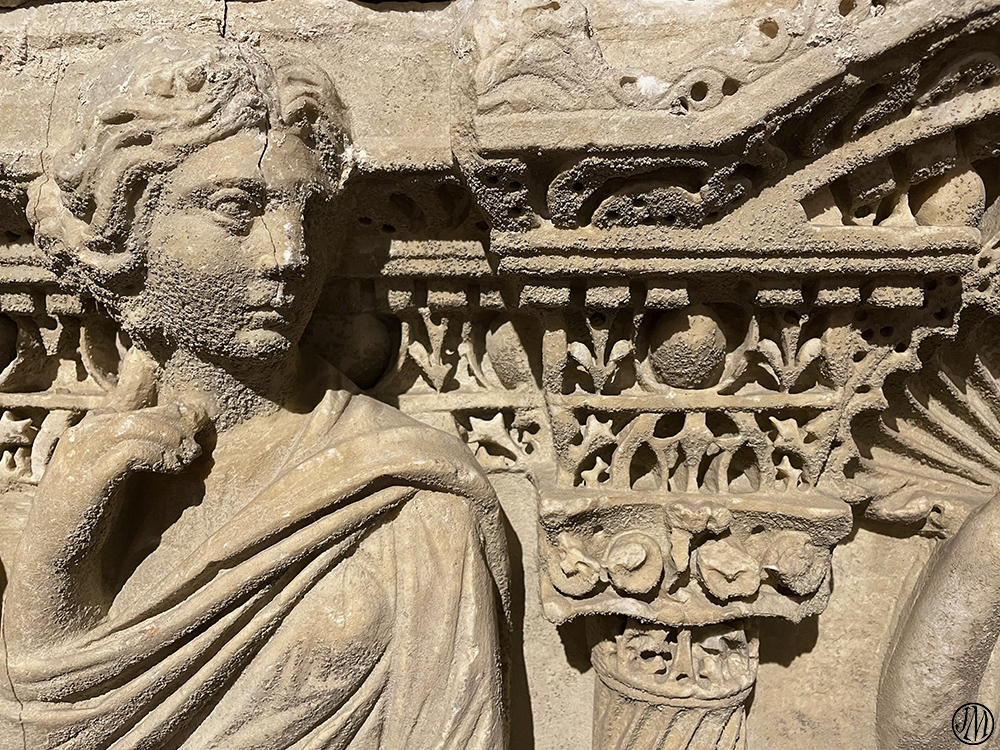 This last one is a detail of a woman by an intricately carved pillar, showing the weathering of centuries

What a day of magnificent sights, experiences and learning, but there was more.  From Antalya we were bussed along the coast to Alacasu Cove, just beyond the town of Kemer and there we boarded our traditional wooden gulet, the Cavurali and were warmly welcomed by the crew of three – the captain, Yavuz, the all-purpose ‘boatboy’, Ali and the chef, Ahmet. 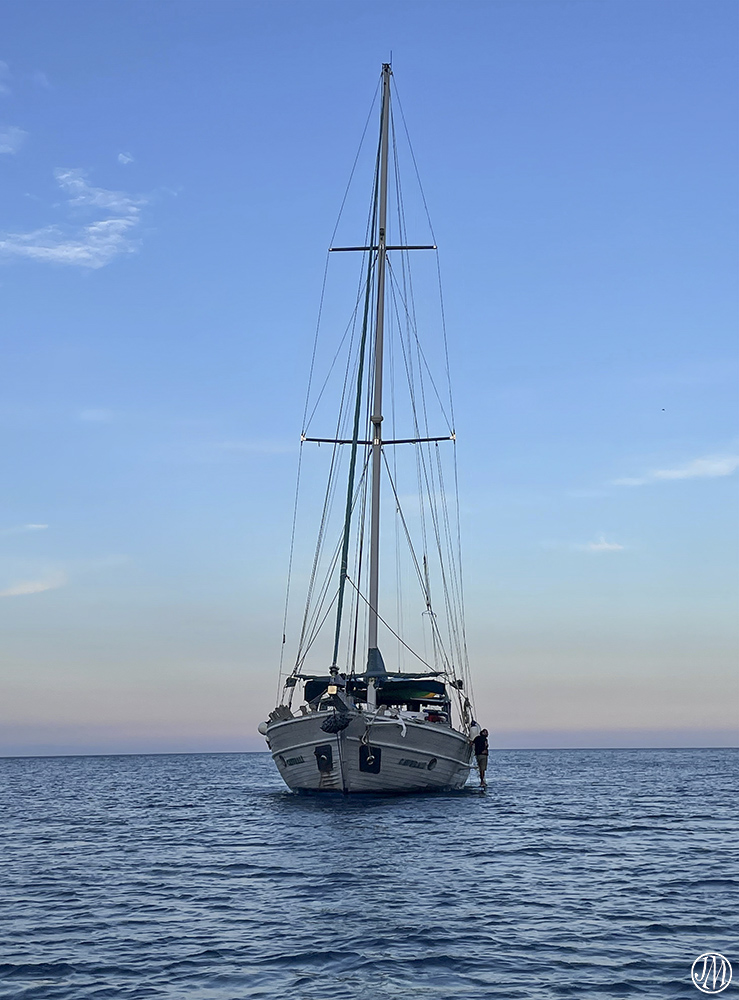 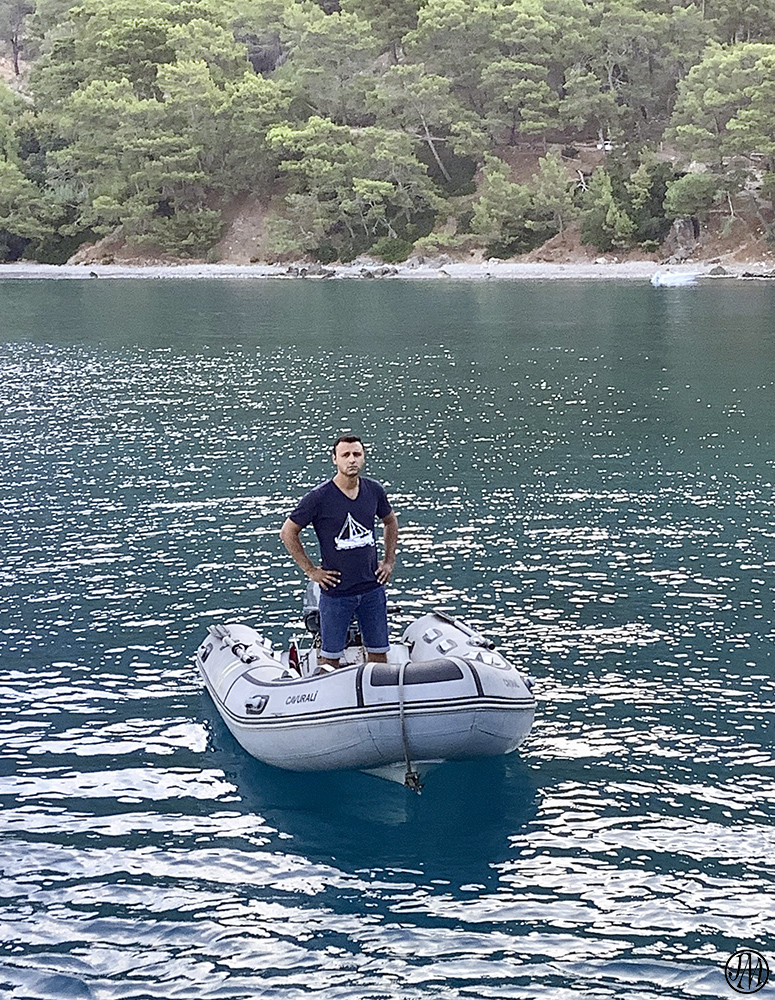 Ali, in the dingy which was our daily transport to and fro, and which ferried us out to the gulet. 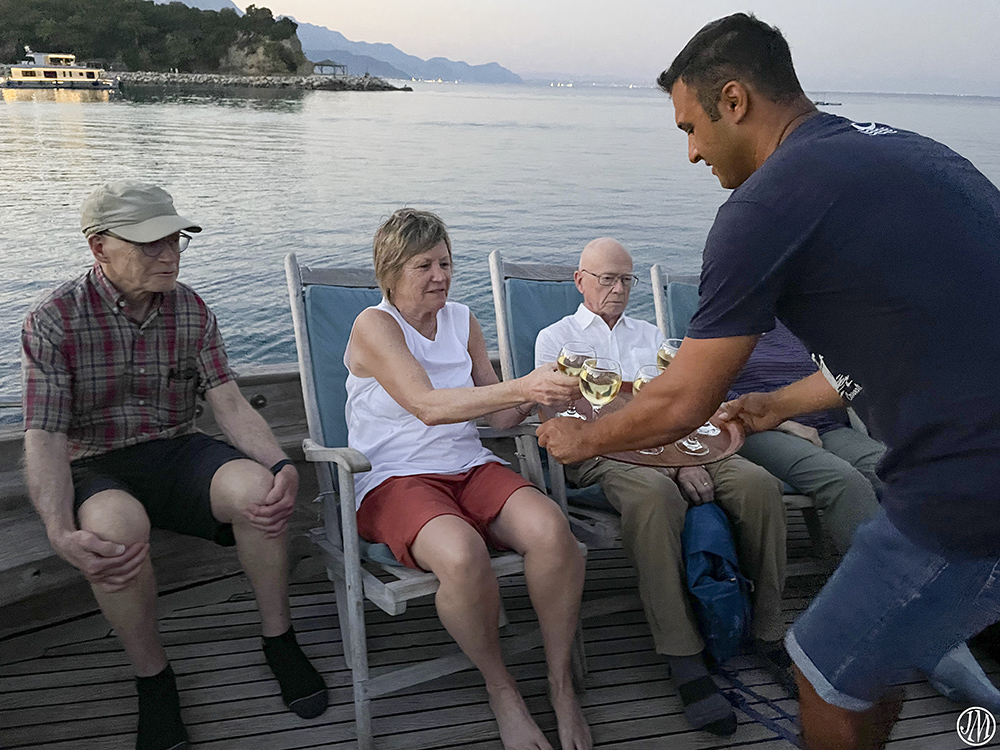 Ali serves a welcome drink on the foredeck 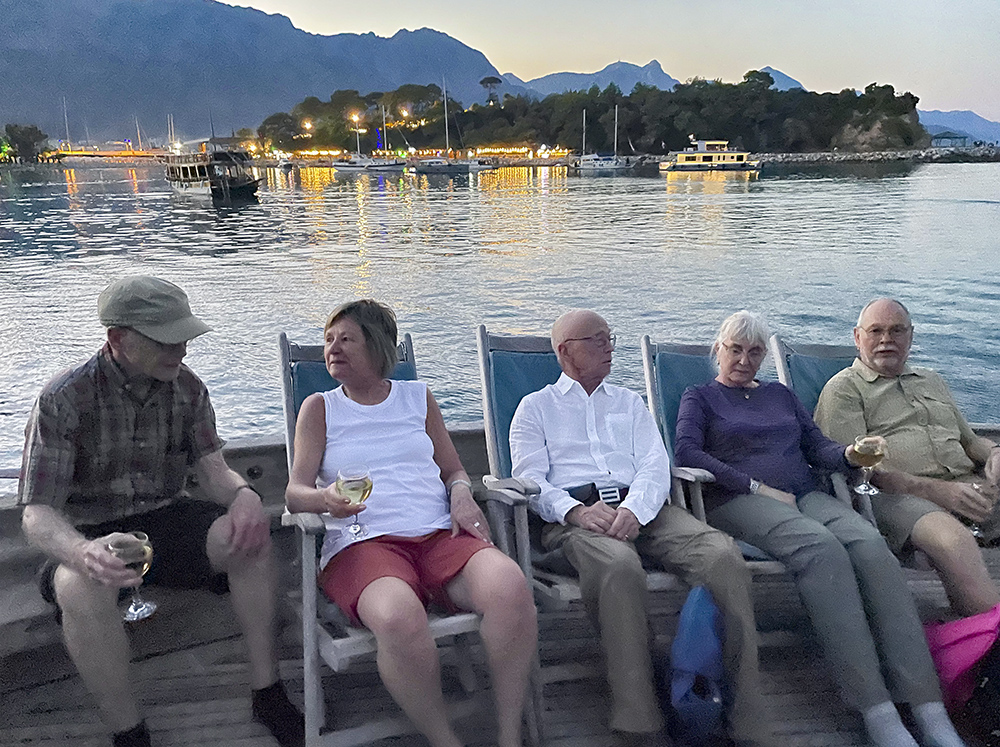 Five of our gang of 7 still in Alacasu Cove, relaxing and waiting for dinner. 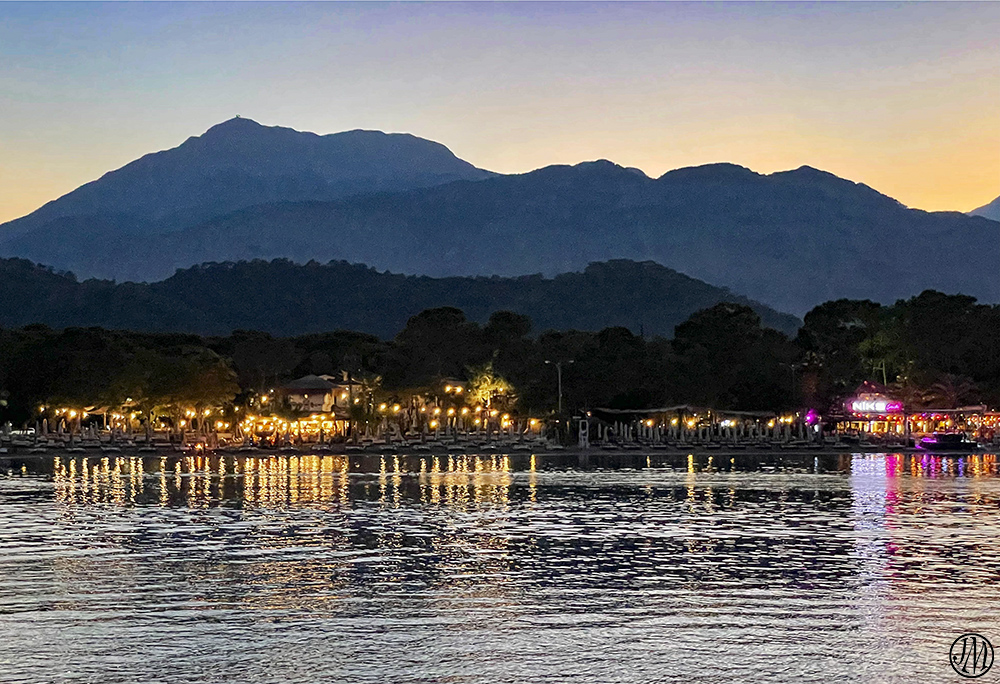 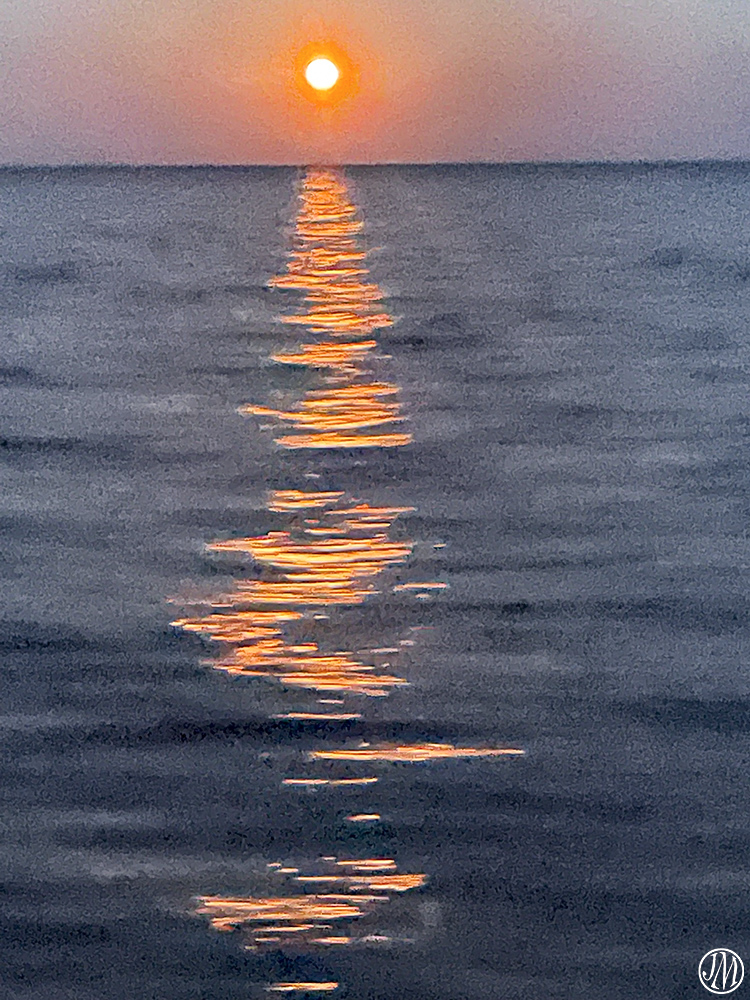 What a day to begin our journey along the Mediterranean Coast of SE Türkiye!  Not every day will be so completely documented as this first day but there is so much to tell and show from my weeks there, that I will struggle to contain my excitement as I tell the stories.  However, I will try to just give you the highlights of which there were many. And you can always just skim …

Until soon for the next installment.