Another glorious day as we drove from Nelson along the winding Queen Charlotte Drive to Picton from where we took the Interislander Ferry to Wellington.  The ferry cruises through the beautiful Marlborough Sounds, then across Cook Strait and into Wellington Harbour.

A panorama of Queen Charlotte Drive looking out to the Sounds. 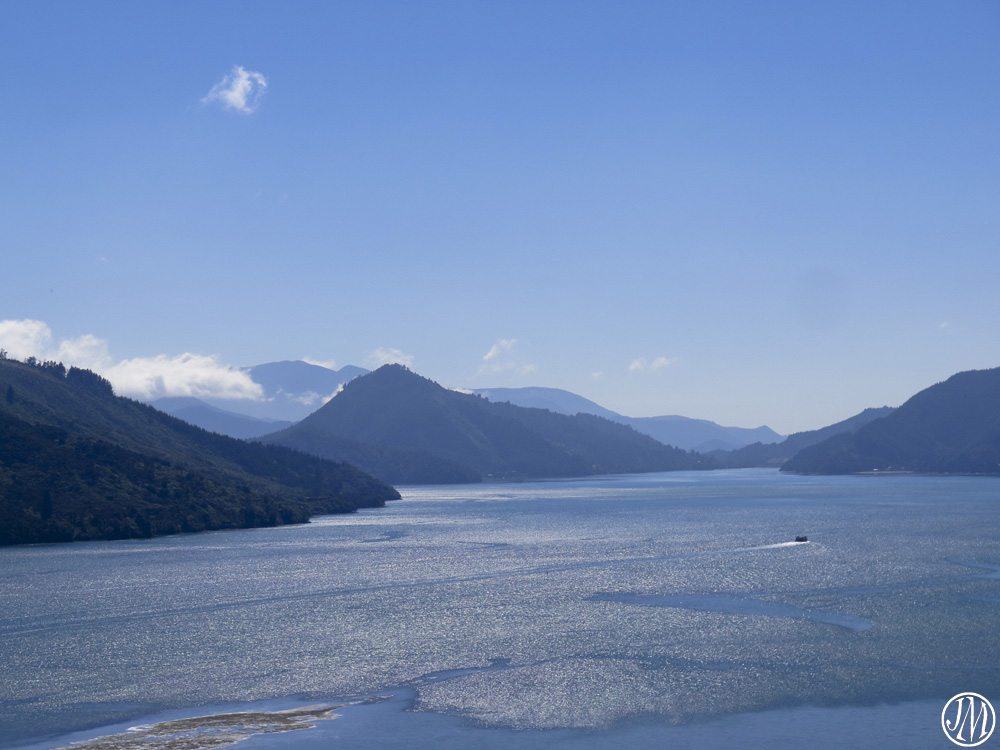 One of the many pretty little bays along the Sounds. 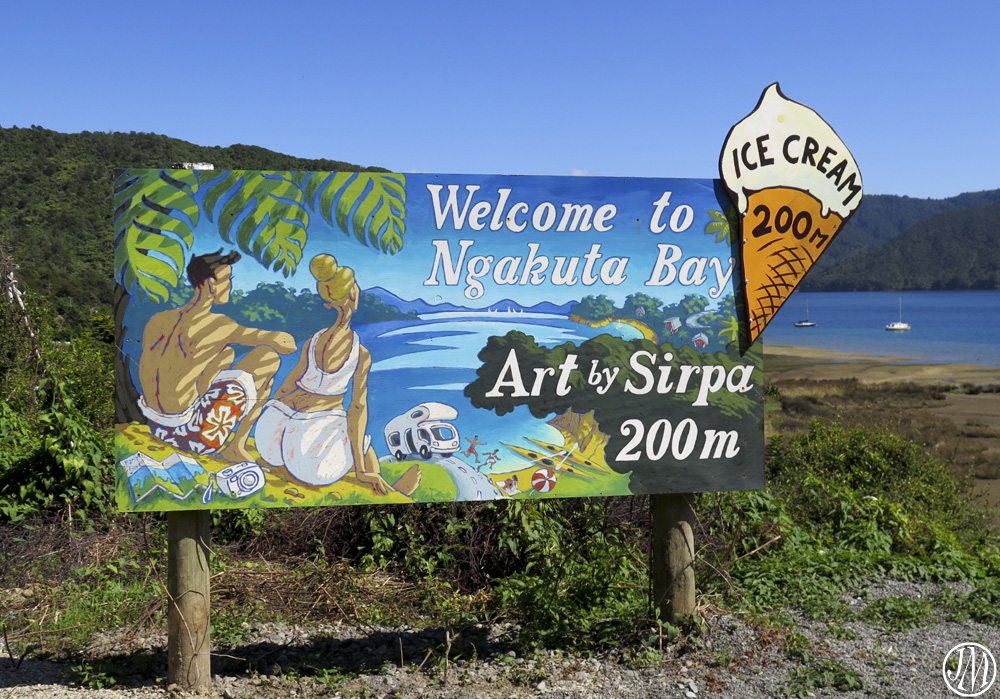 Good advertising for an ice-cream stop …. 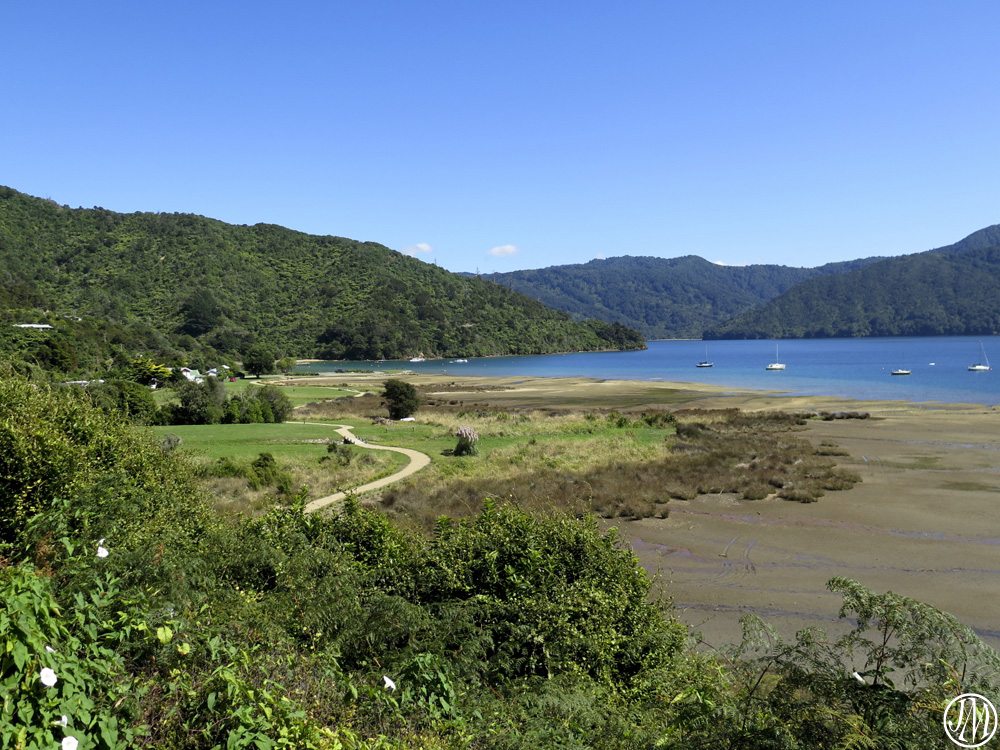 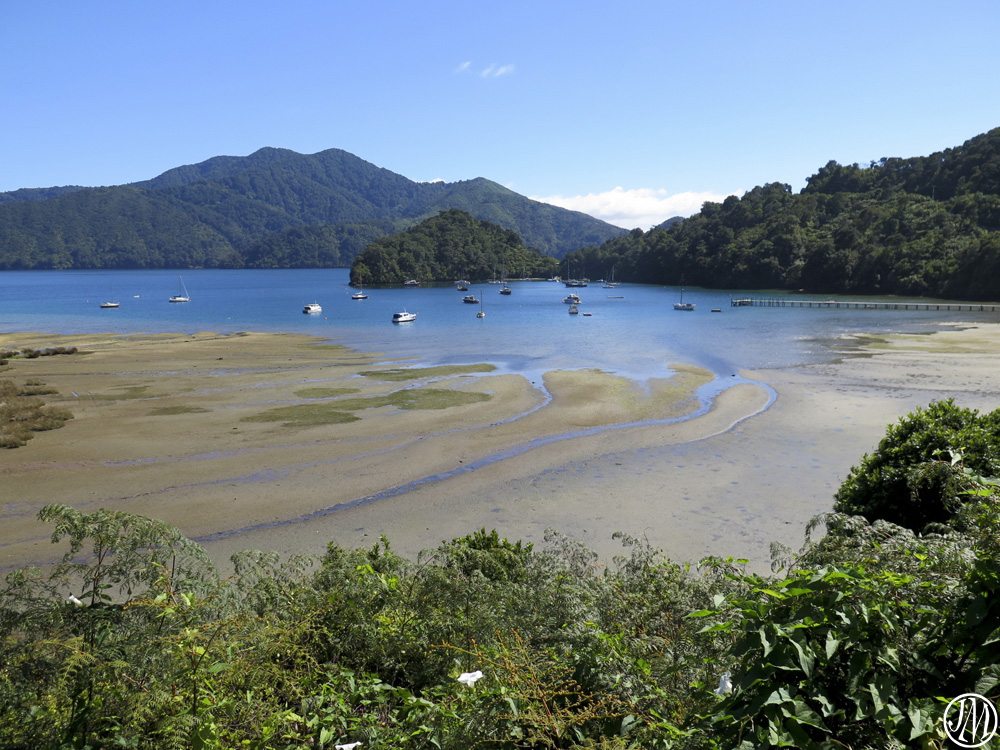 The other extreme of Ngakuta Bay 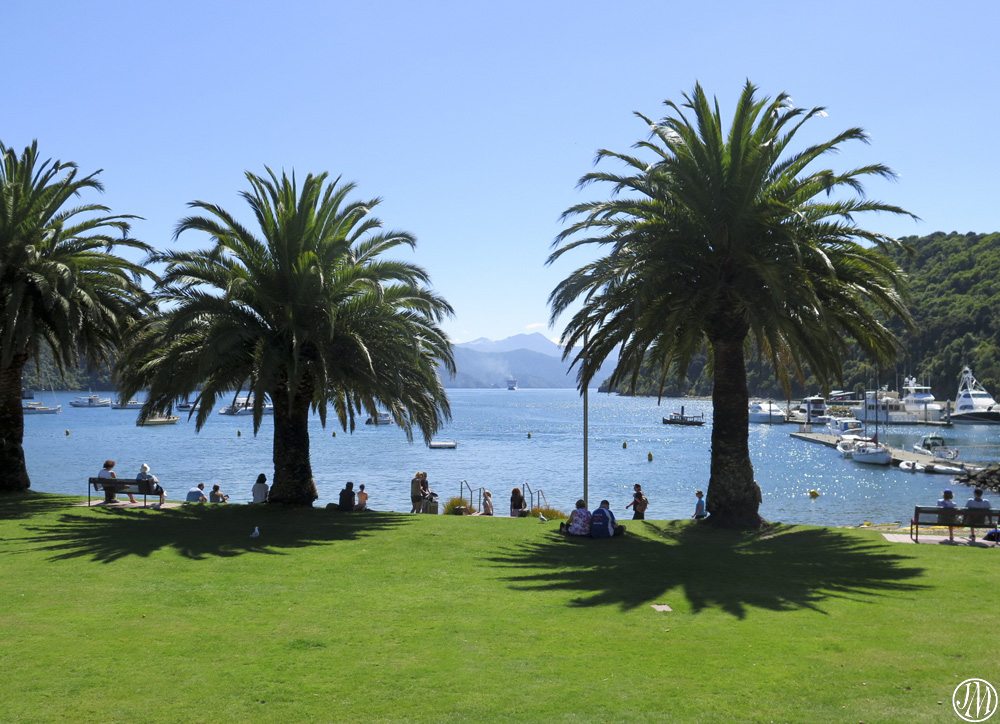 The park at Picton, a lovely place to rest before taking the ferry. 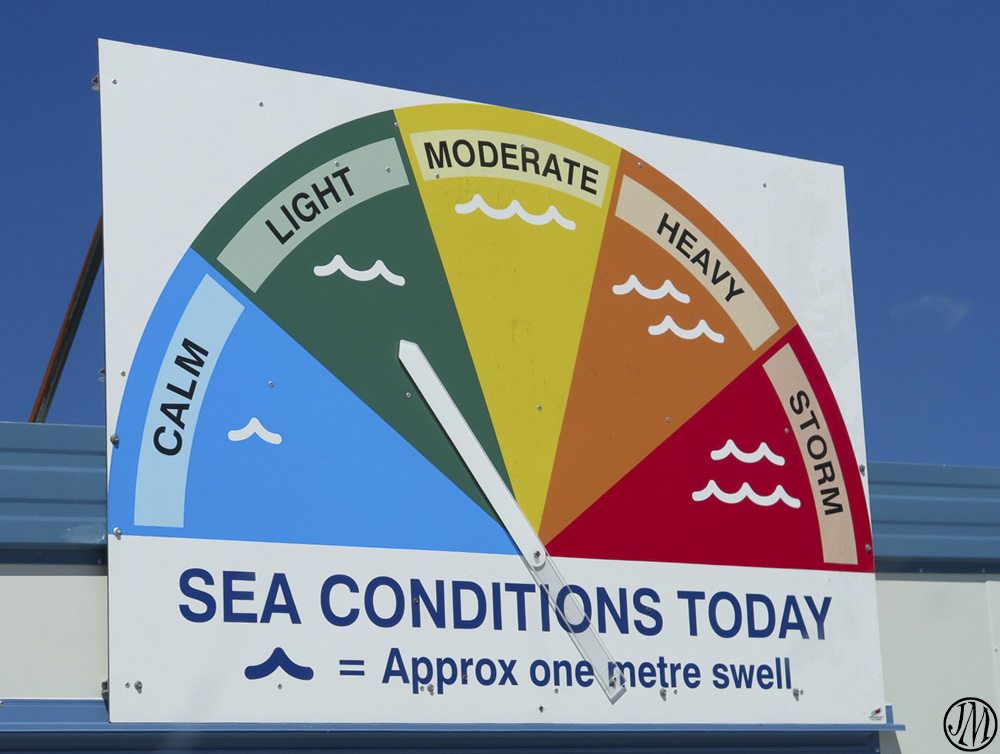 Conditions were good for the Cook Strait crossing. 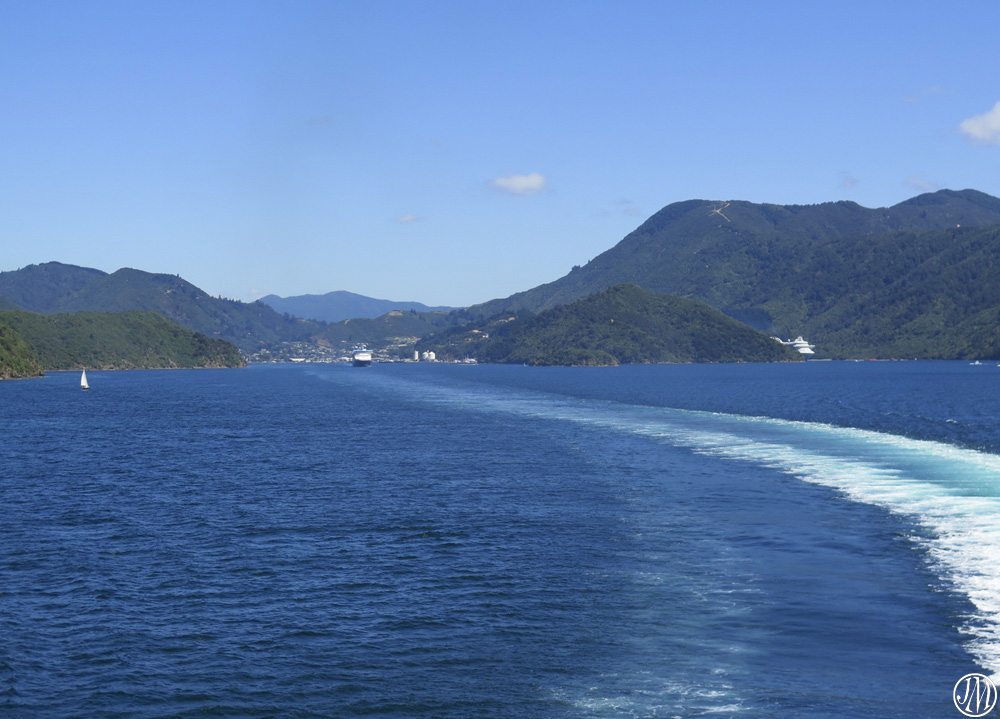 Leaving Picton behind us, and to the right, a cruise ship berthed in the next bay. 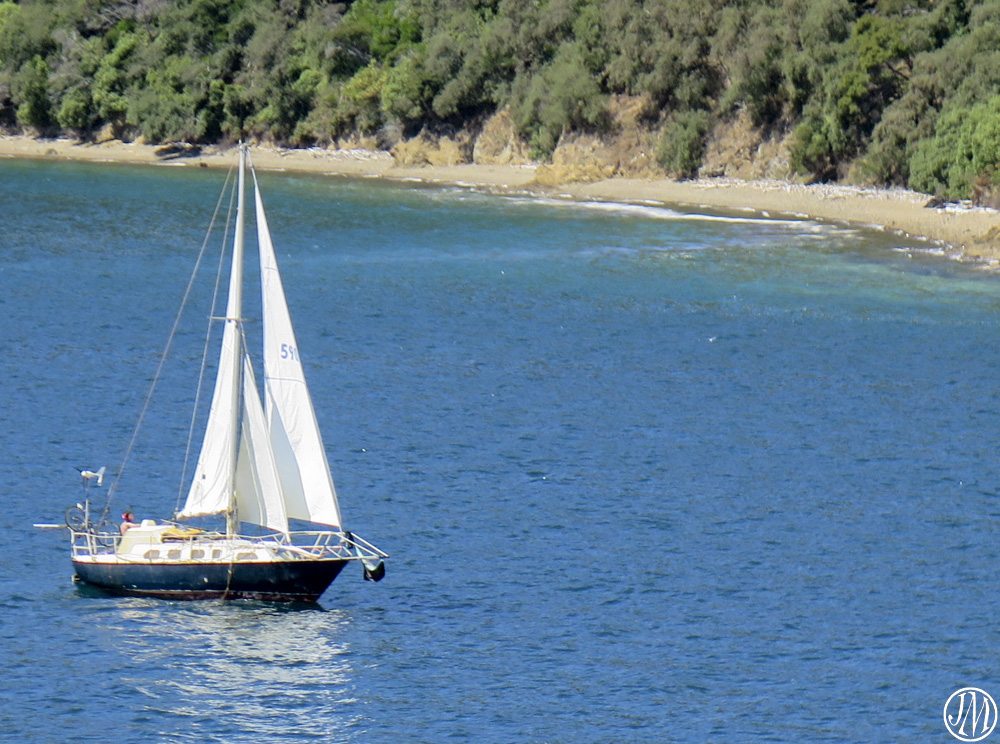 Plenty of smaller craft were enjoying the light summer breezes. 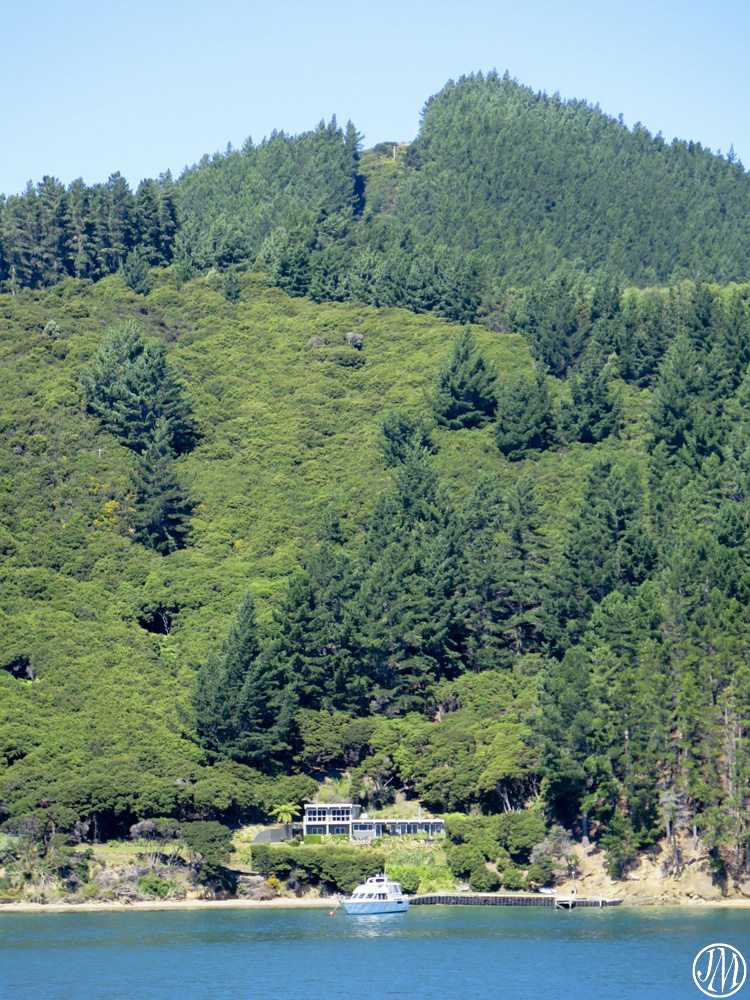 Some of the houses along the Marlborough Sounds can only be accessed by boat. 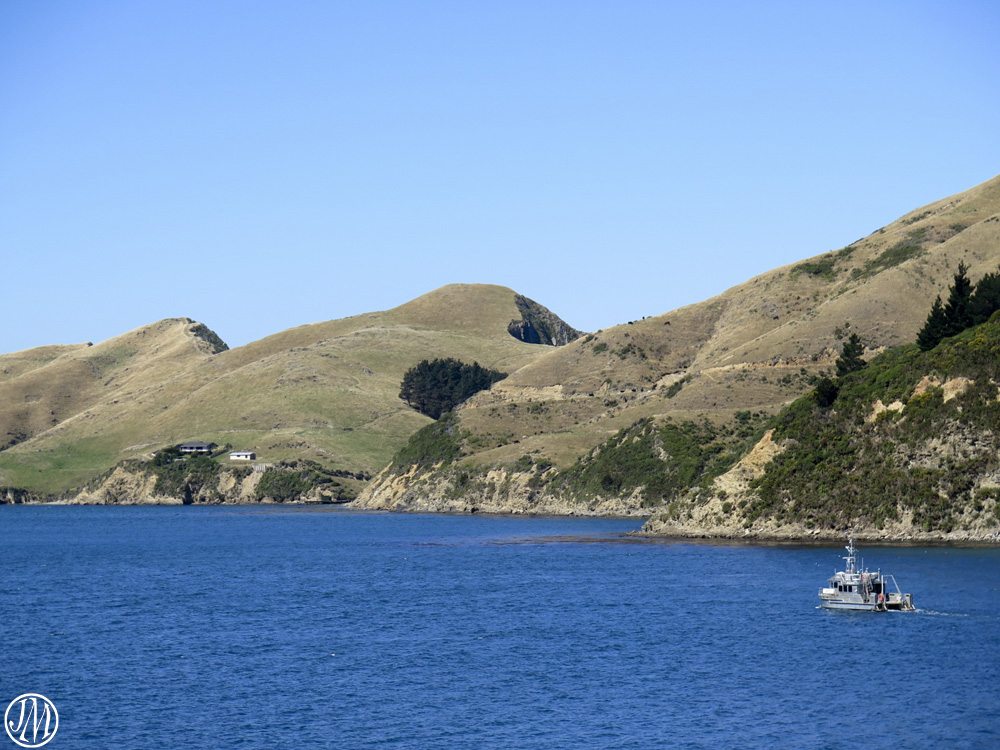 Nearing the entrance to the Sounds, the hills become more barren and windswept. 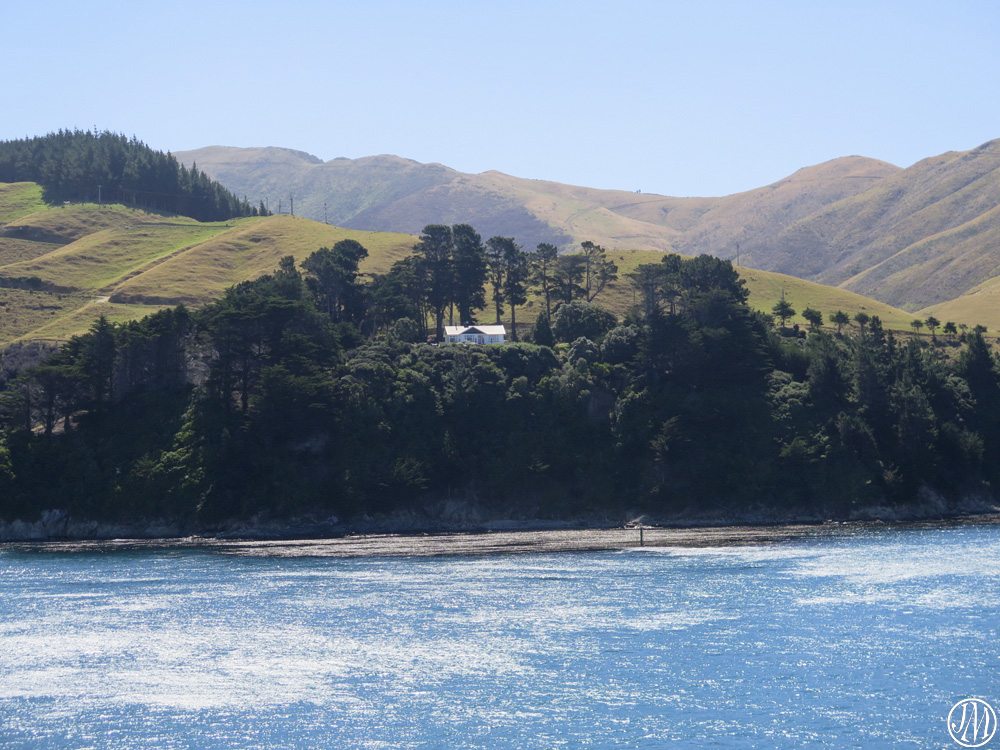 What a dramatic setting for this house, and what views it must have. 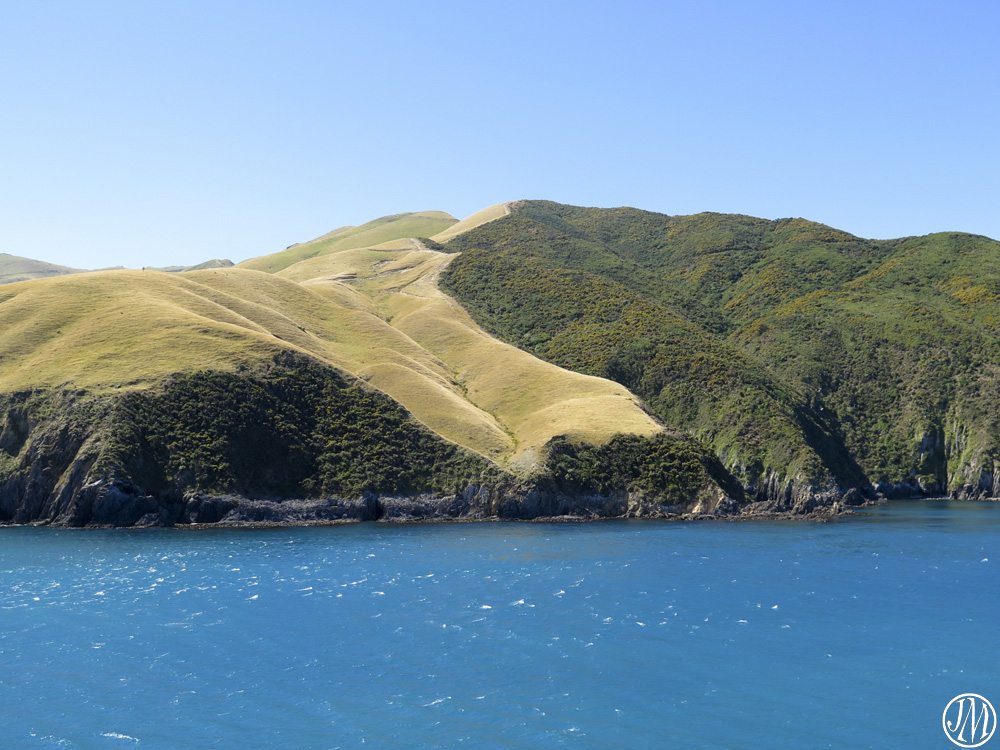 The blues, gold, and green of this landscape, clear and stark. 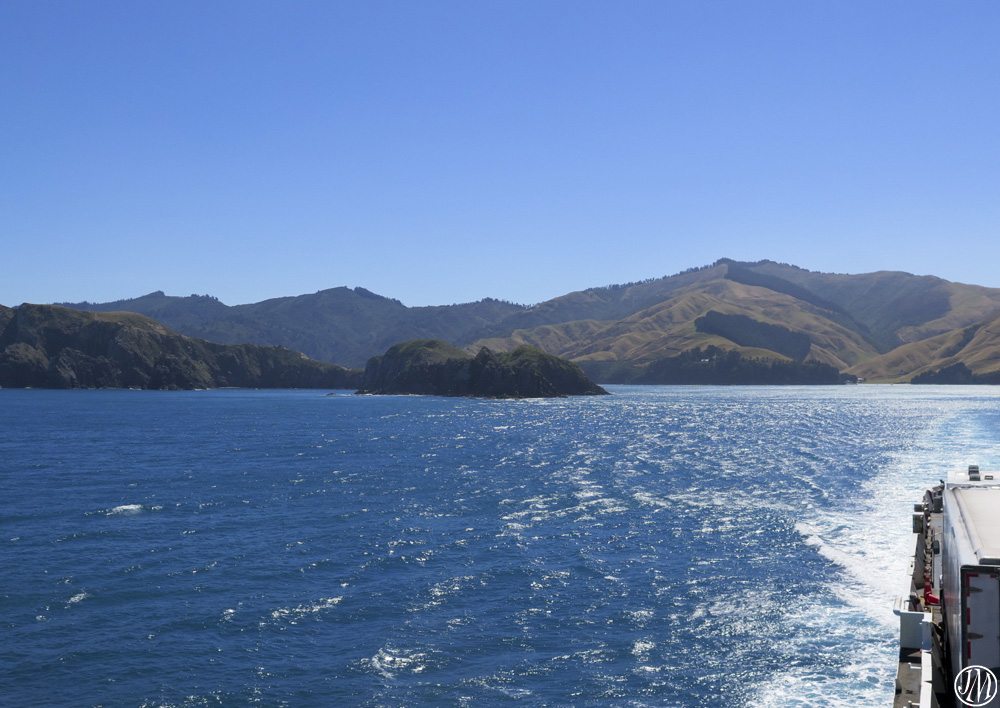 We say farewell to the magnificent South Island as we turn into Cook Strait. 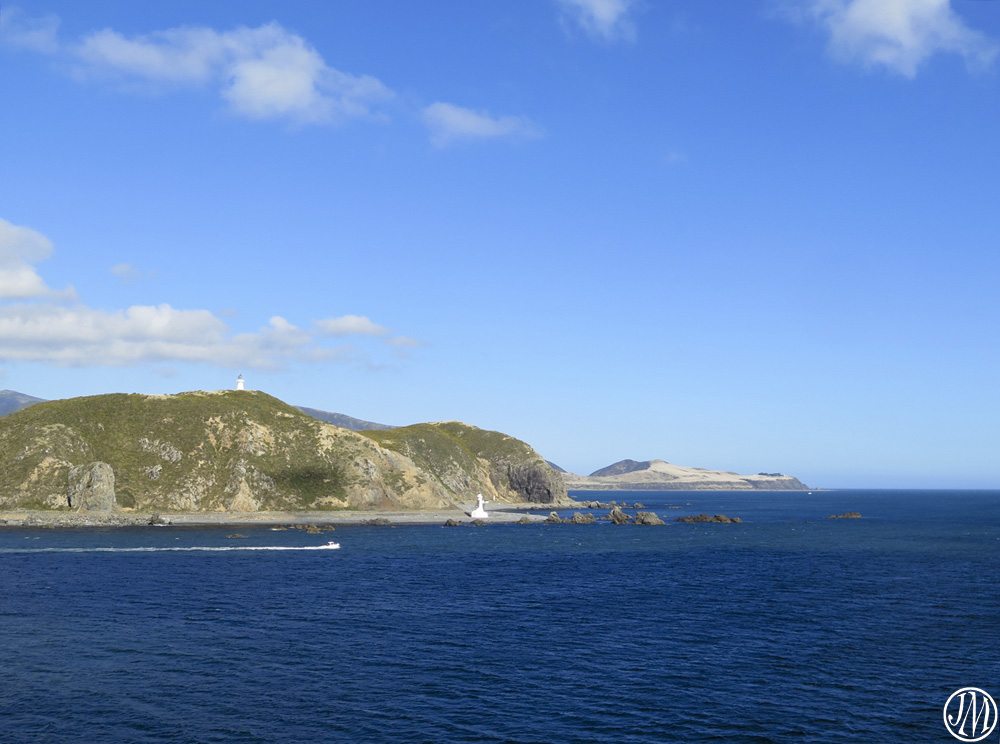 Entering Wellington harbour with the eastern heads, Cape Palliser in the distance and the Pencarrow Lighthouse. 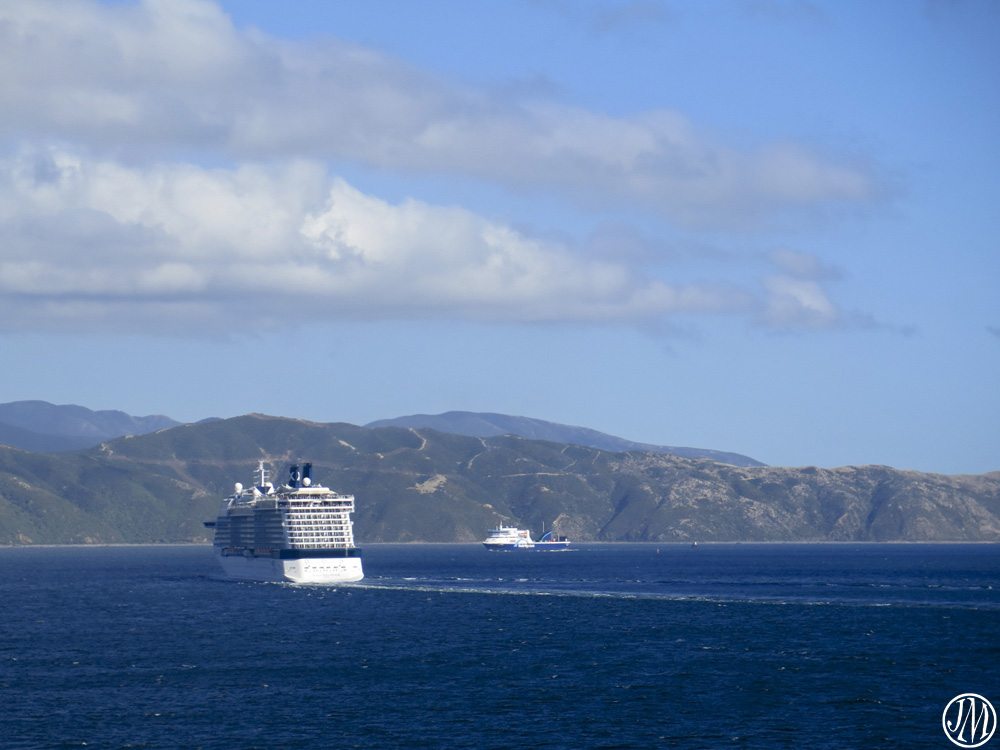 Further into the harbour, we pass a cruise ship heading south. 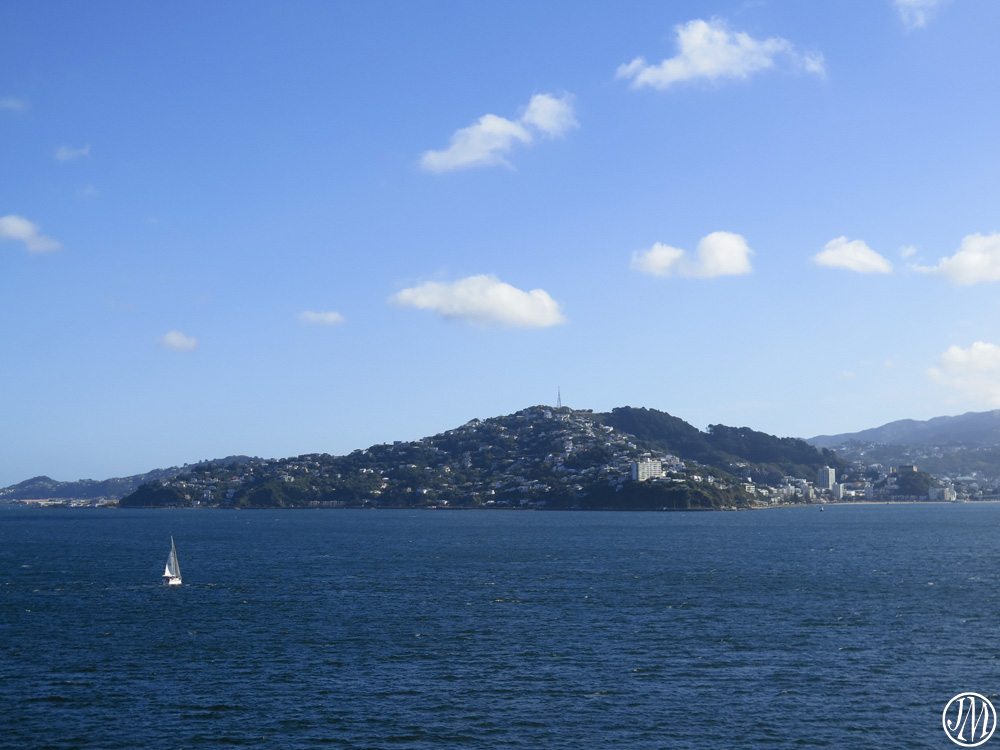 The bays and suburbs and Mt Victoria above the city come into view. 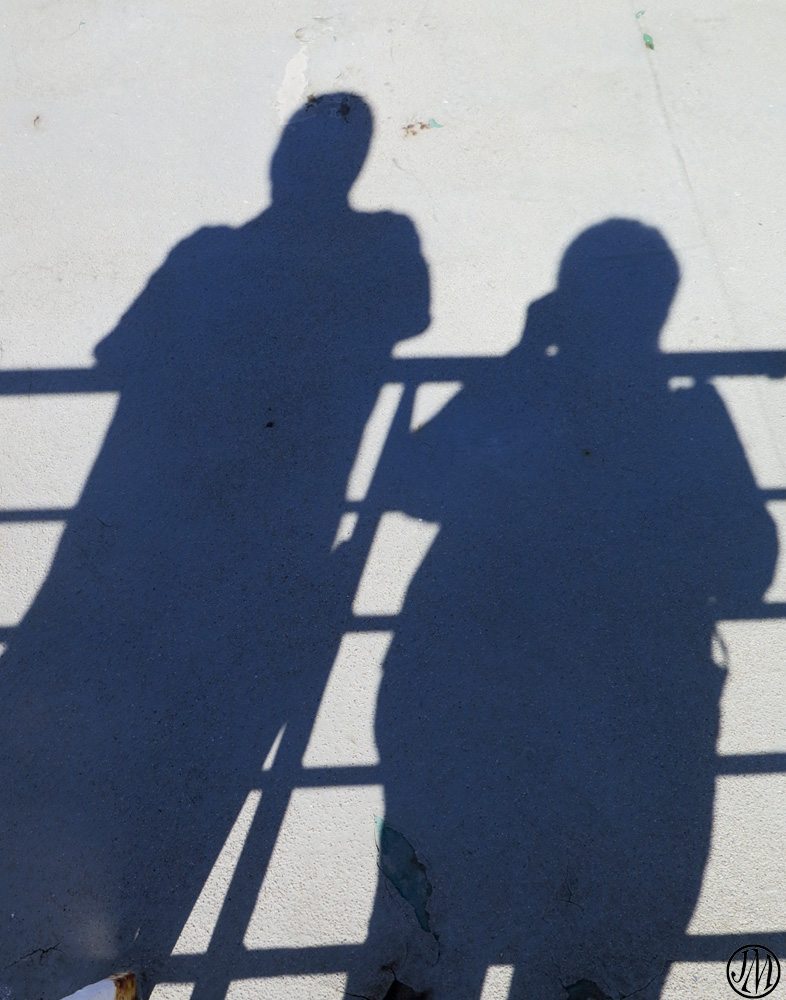 A silhouette selfie of John and Joanna as we view Wellington harbour. 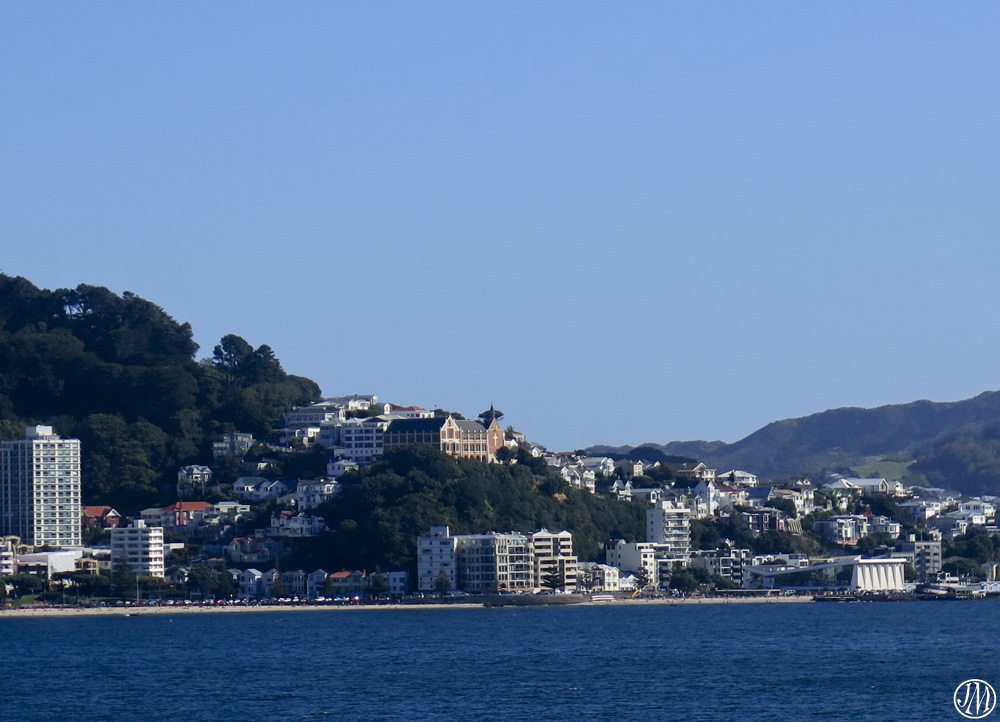 Oriental Bay with the iconic and historic St Gerard’s Church and Monastery facing the sea.

In the evening we were invited by friends to their lovely apartment housed in the old Overseas Terminal and were privileged to look directly out towards Oriental Parade and its marina and the Monastery above. 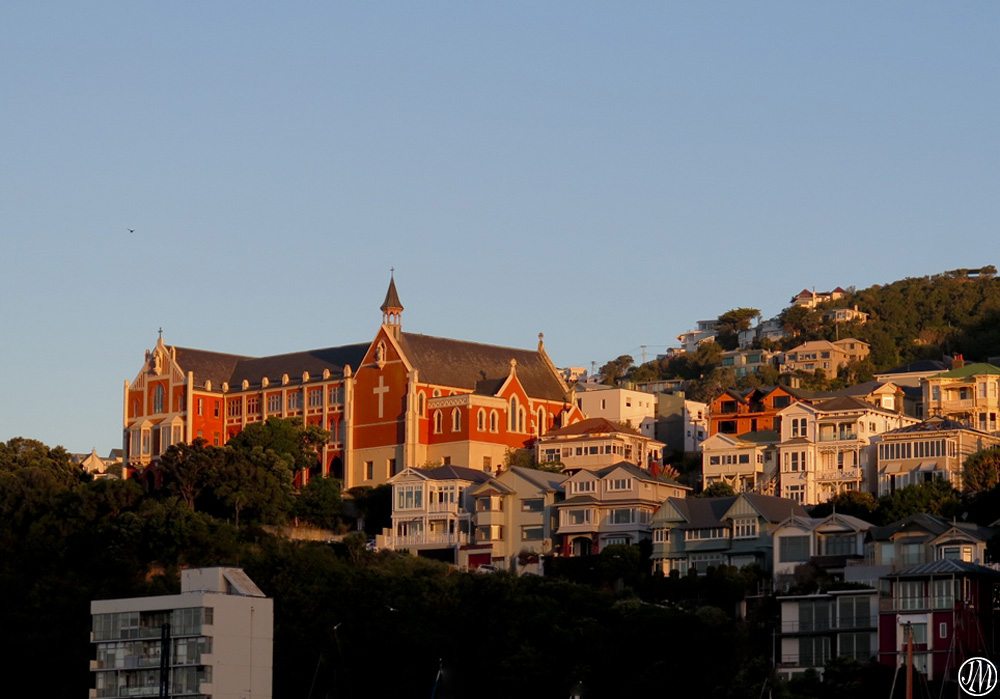 The evening sun paints St Gerard’s Church and Monastery with a rosy glow. 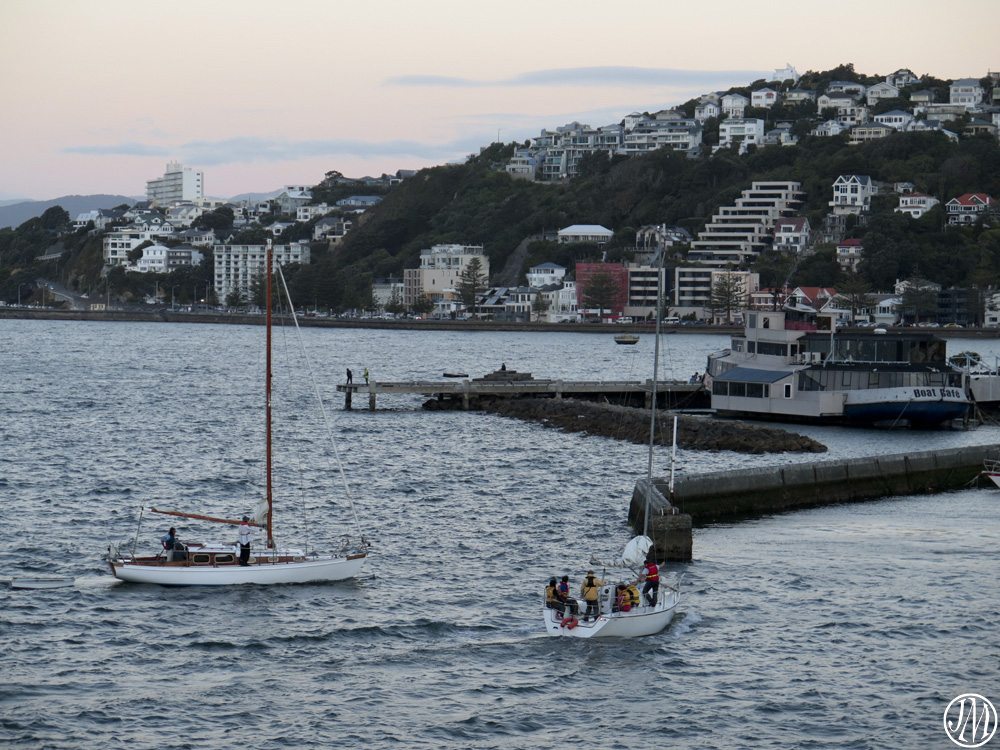 A couple of yachts coming back to their berths at the Oriental Parade Marina at dusk. 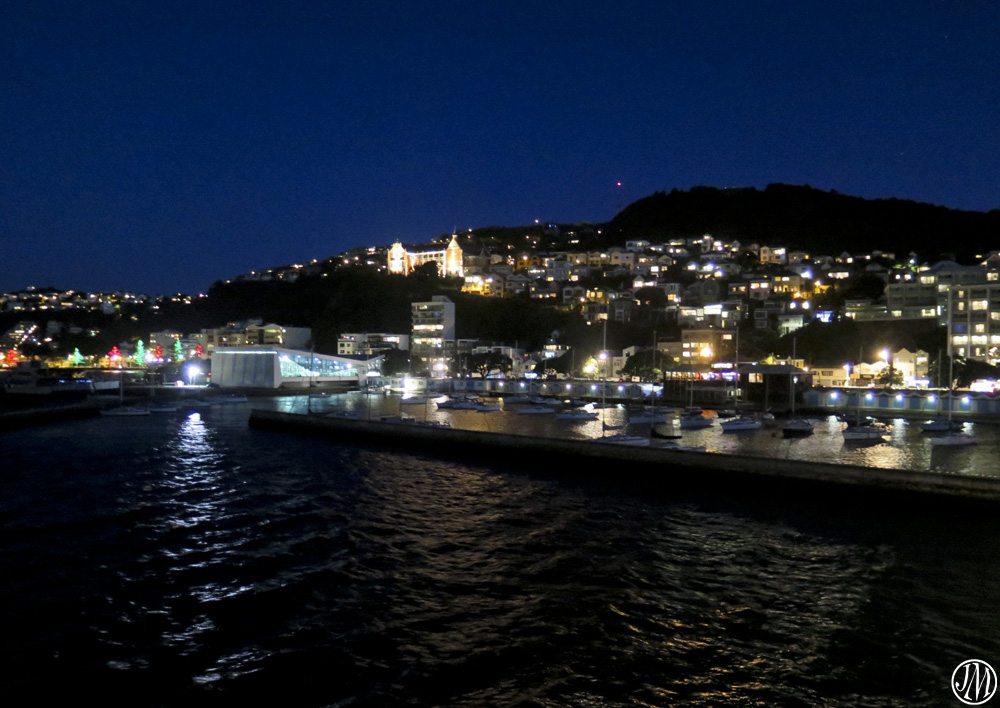 St Gerard’s dominating the skyline amid the lights of Oriental Parade.

A wider panorama shot of Oriental Parade and beyond.

We only had one day in Wellington so we chose to visit New Zealand’s National Museum ‘Te Papa’.  After looking at some of the historical and cultural exhibits about the Maori people and the different groups of immigrants over the last couple of centuries, we spent a sobering couple of hours in the most recent feature – The Gallipoli Exhibition.

This ground-breaking exhibition tells the story of the Gallipoli campaign in World War I through the eyes and words of eight ordinary New Zealanders who found themselves in extraordinary circumstances, 100 years ago this year. For the exhibition, Te Papa joined forces with Weta Workshop (famous for creating the scenes and characters of many movies, most notably Lord of the Rings) to create an exhibition like no other. Each one of the eight people portrayed is captured frozen in a moment of time on a monumental scale – 2.4 times human size. The large-scale sculptures took a staggering 24,000 hours to create, and countless hours were spent researching their rich histories. Cutting-edge technology was used to create 3-D maps, projections, miniatures, models, dioramas, and interactive experiences to bring this story to life. In total, 2,779 Kiwis lost their lives on Gallipoli, and many others were scarred for ever. 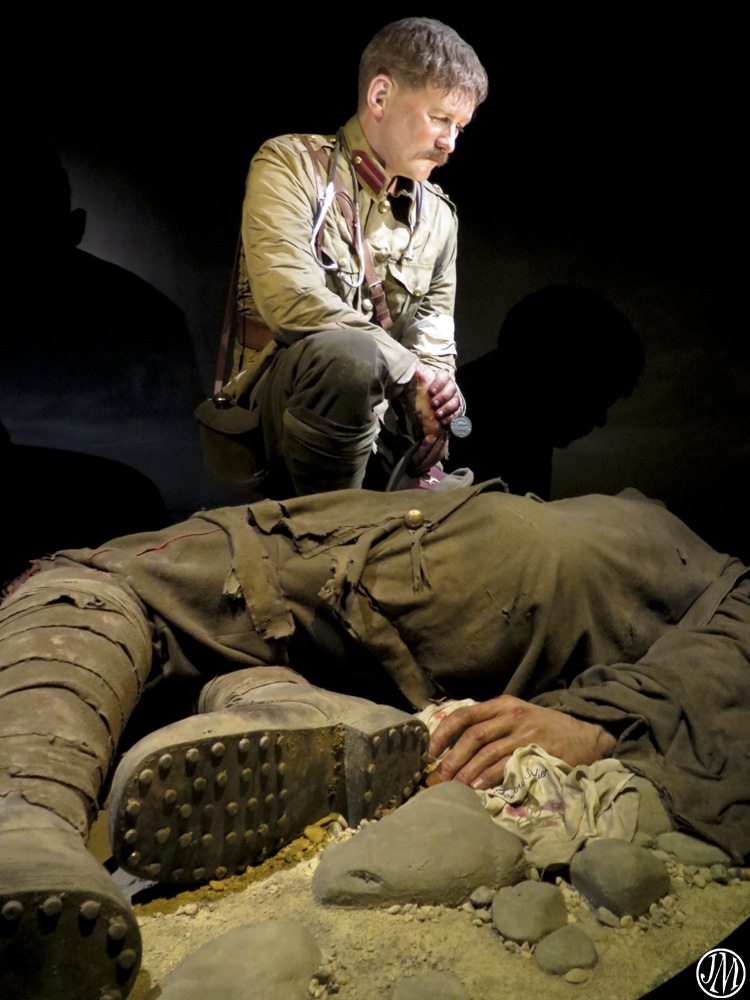 An army doctor takes a moment to mourn the death of a colleague, after removing his dogtag for identification. 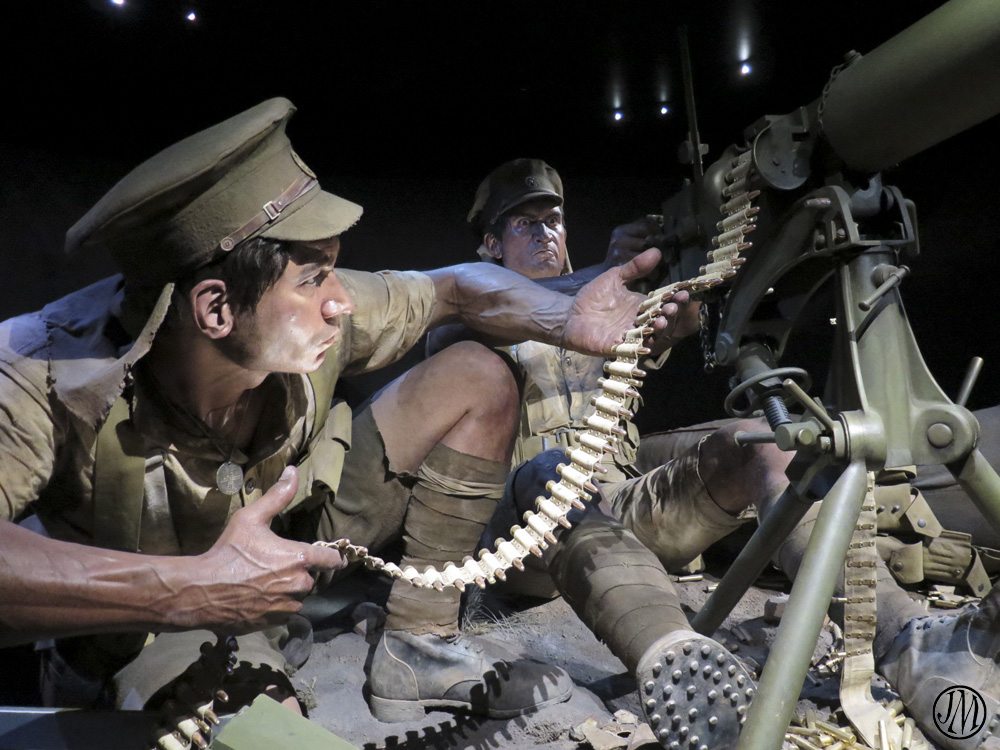 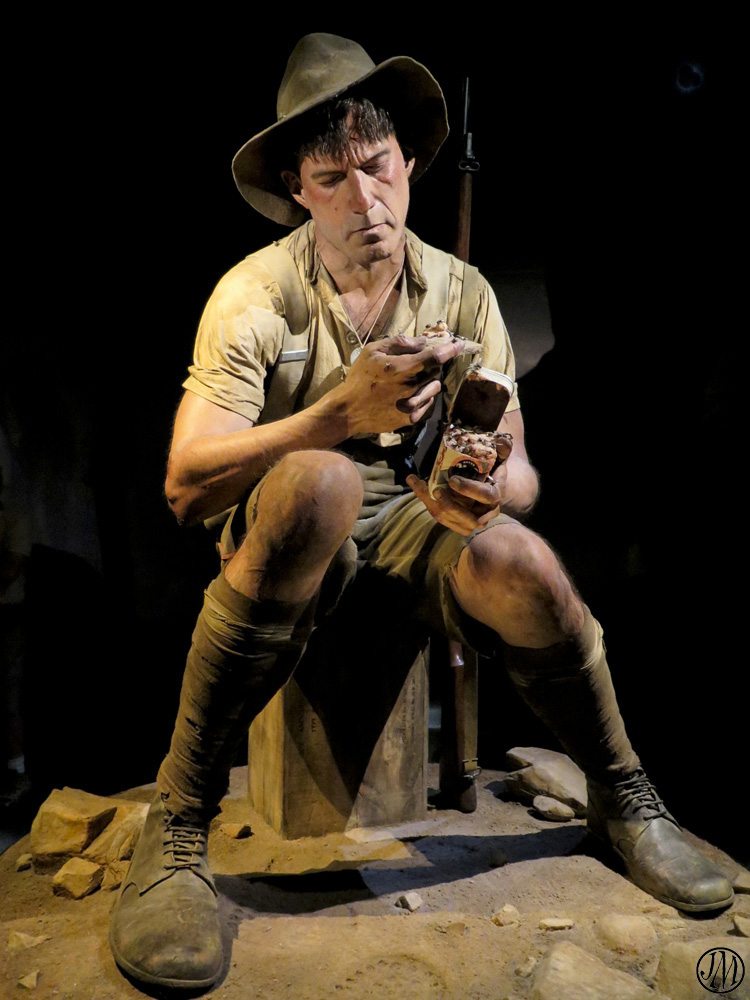 Exhausted beyond belief and only fly-ridden corned beef to sustain him. 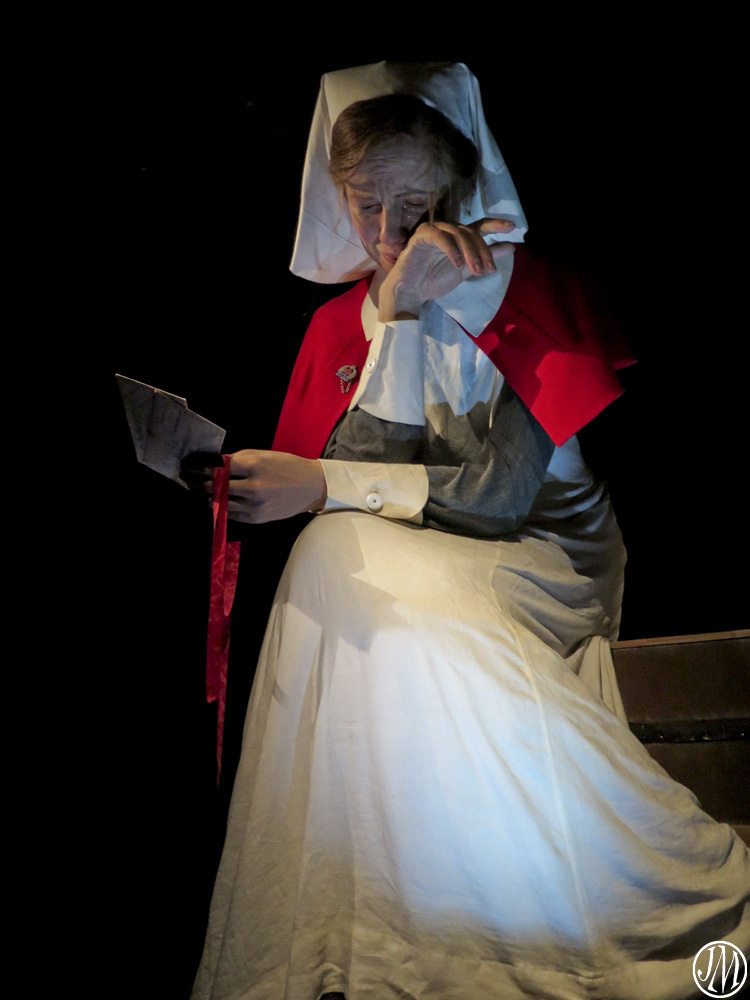 A nursing sister mourns her brother after receiving news of his death, before returning to her duties.

A sombre note to end this blog, but an eternal reminder of the horror and waste of war.  In New Zealand we honour these and other soldiers who fell in battle on ANZAC Day, the 25th of April which commemorates this most bloody waste of young NZ and Australian lives at Gallipoli, together with the soldiers of the British Army and the Turks against whom they were fighting.

Next posting will be from Hawkes Bay, famous for its wines and home to Napier, known as the Art Deco capital of the world.