It has been almost perfect weather during our trip, and even the few rain days we’ve had have all coincided with ‘driving days’ so we’ve been lucky. Leaving the capital city, Wellington, we travelled north and after winding through the Rimutakas, stopped for a delicious big breakfast at Greytown on the recommendation of a friend and then headed towards the region of Hawkes Bay. 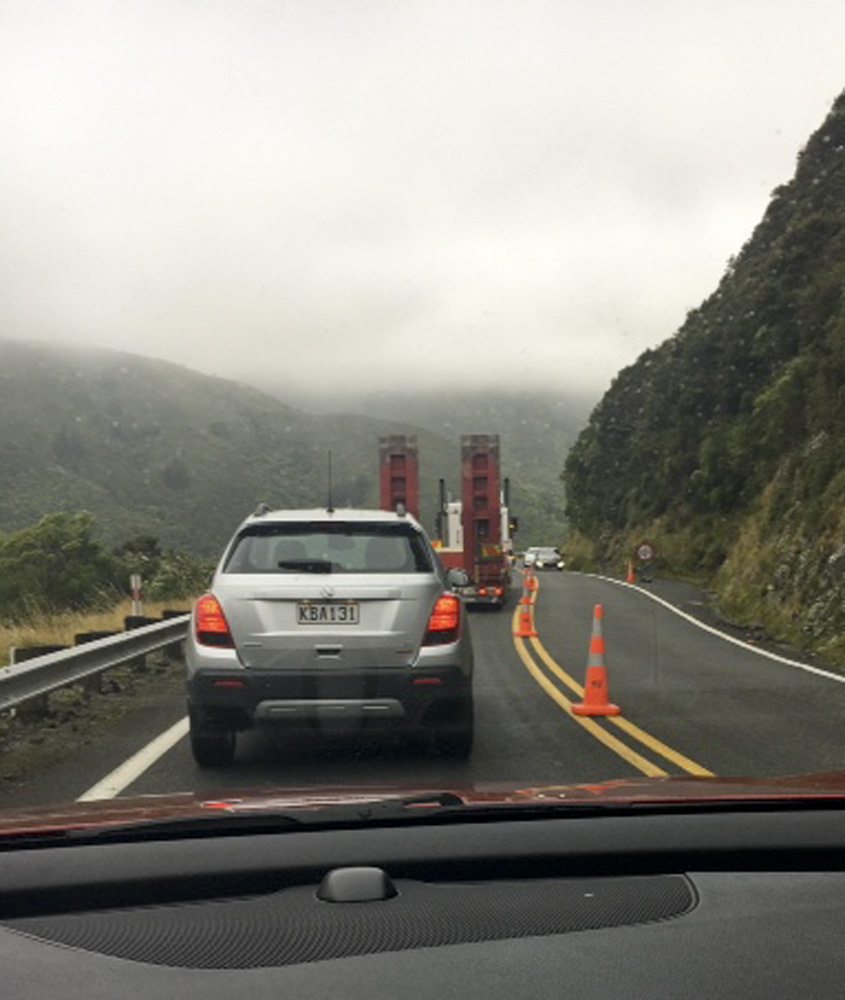 Low cloud over the narrow, winding road through the Rimutakas north of Wellington. The truck ahead
was having trouble maneuvering between the railing and the cones, so going was rather slow. 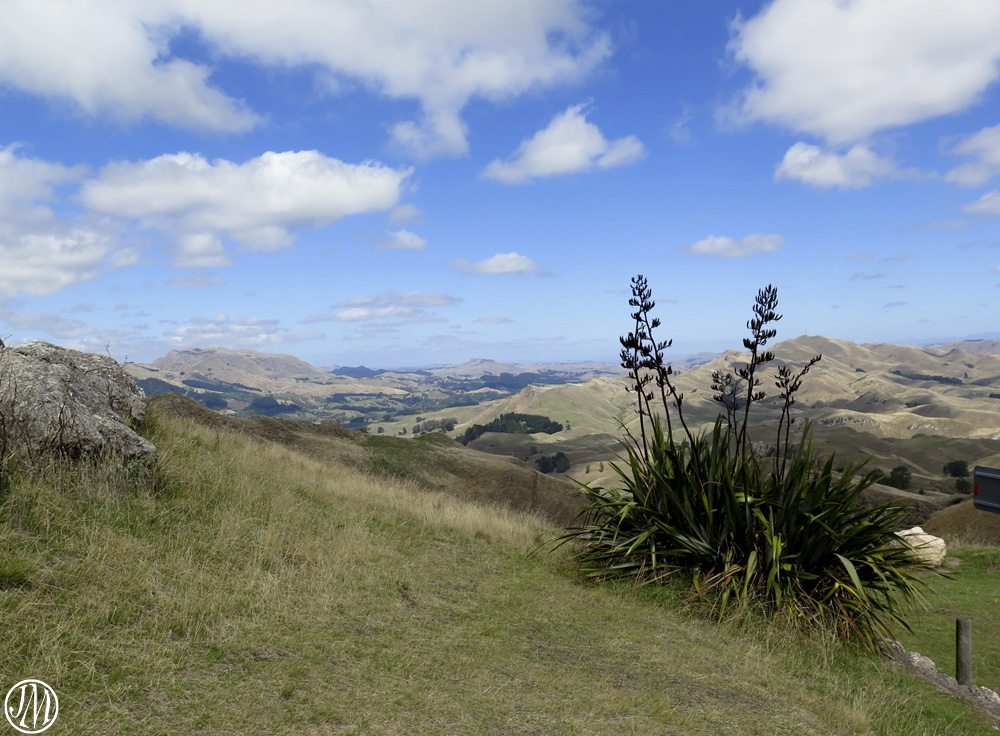 We explored a little once we had settled into The Woolshed Apartments. This is the view looking east from
Te Mata Hill above Havelock North where we stayed which is just south of Napier. 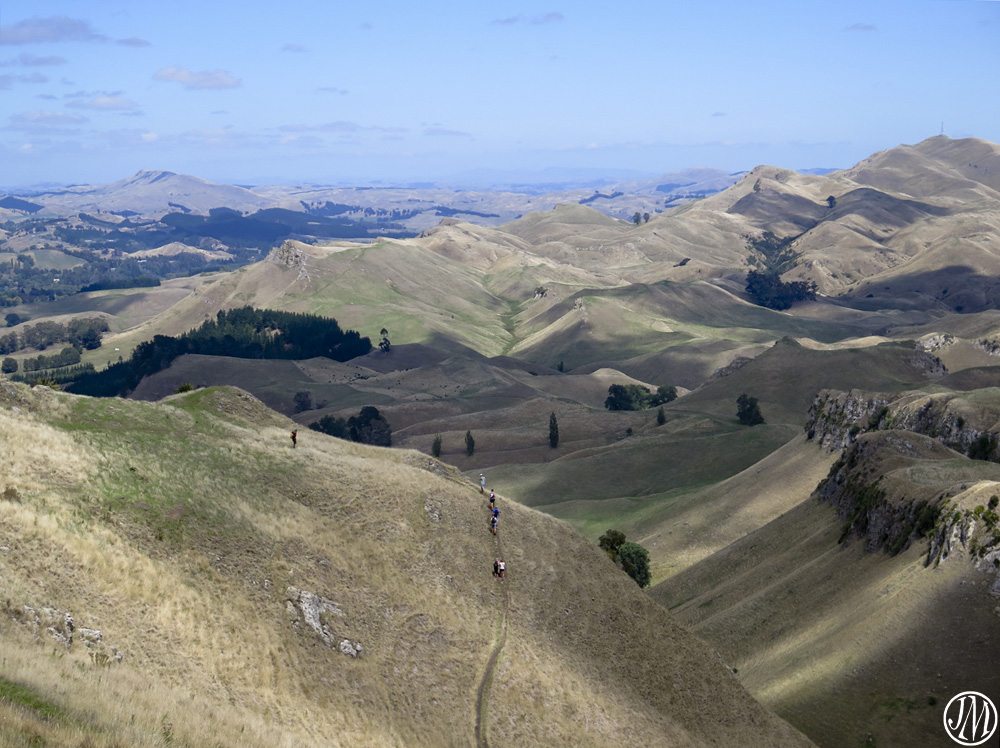 A line of walkers dwarfed by the landscape. 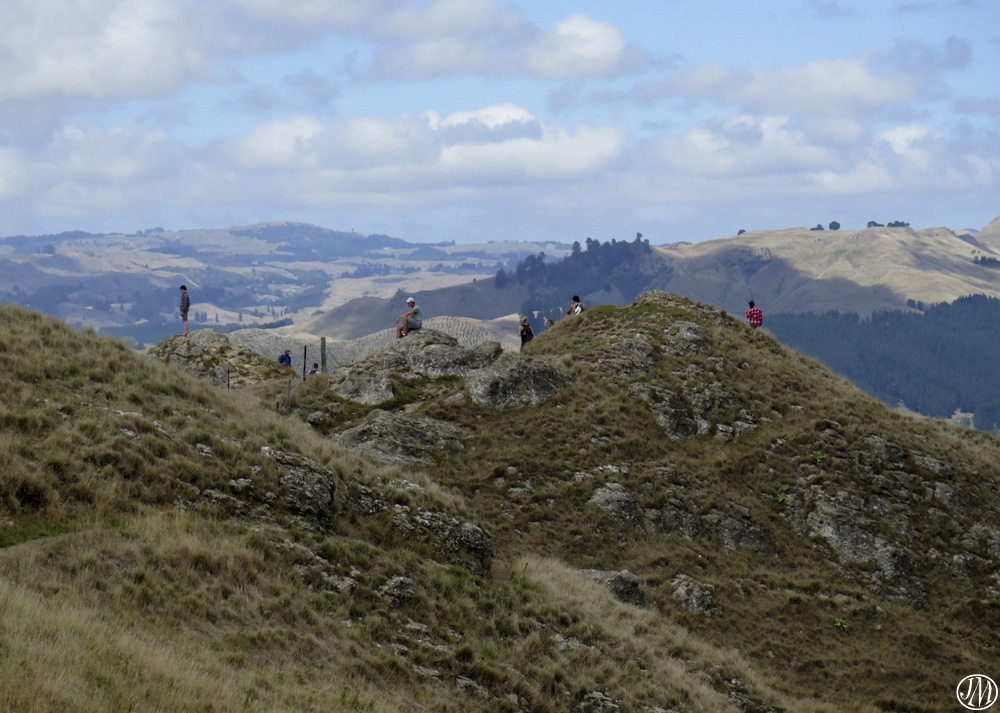 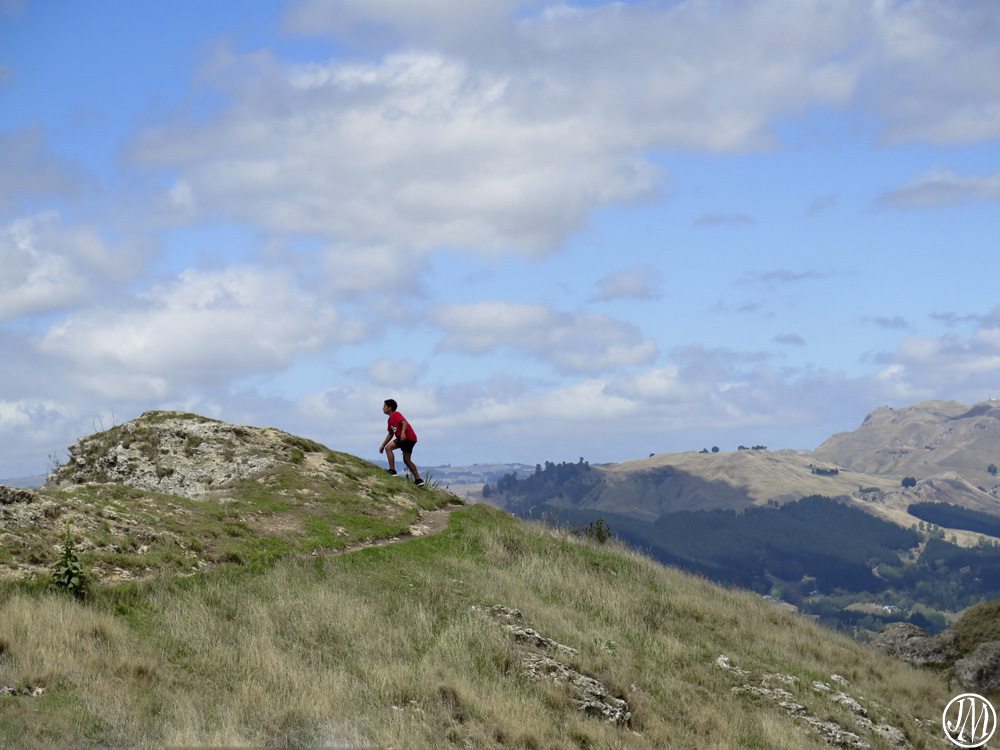 But this young lad wanted to be ‘king of the castle’ and ran to the top. 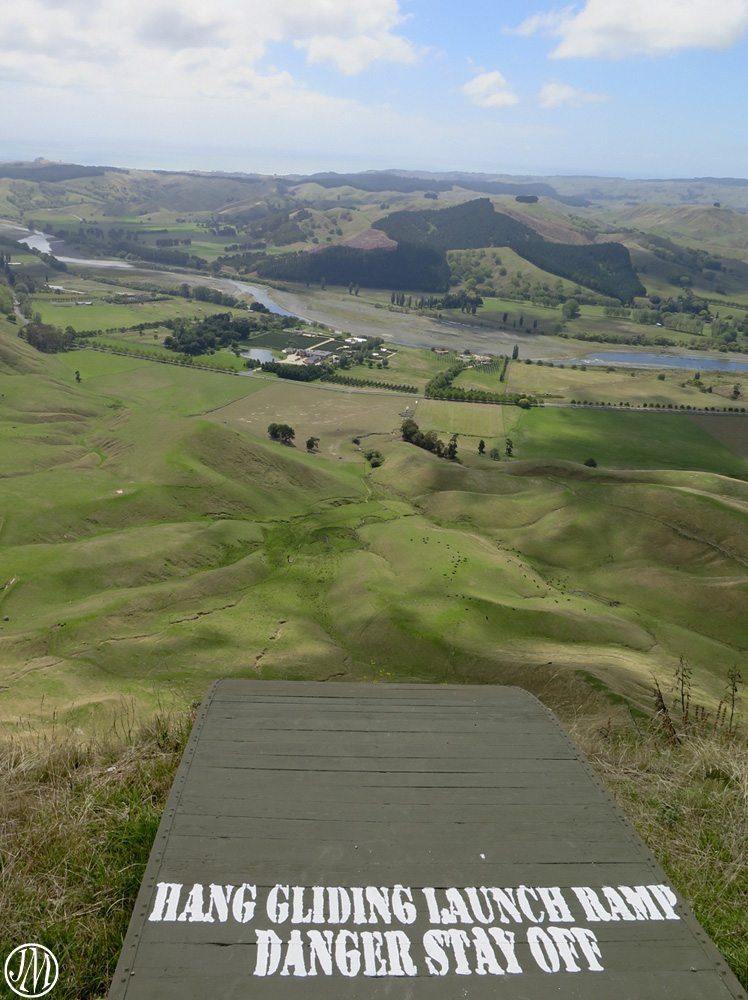 This would be one way of getting down quickly with a great view on the way.  Looking north with the sea in the far distance. 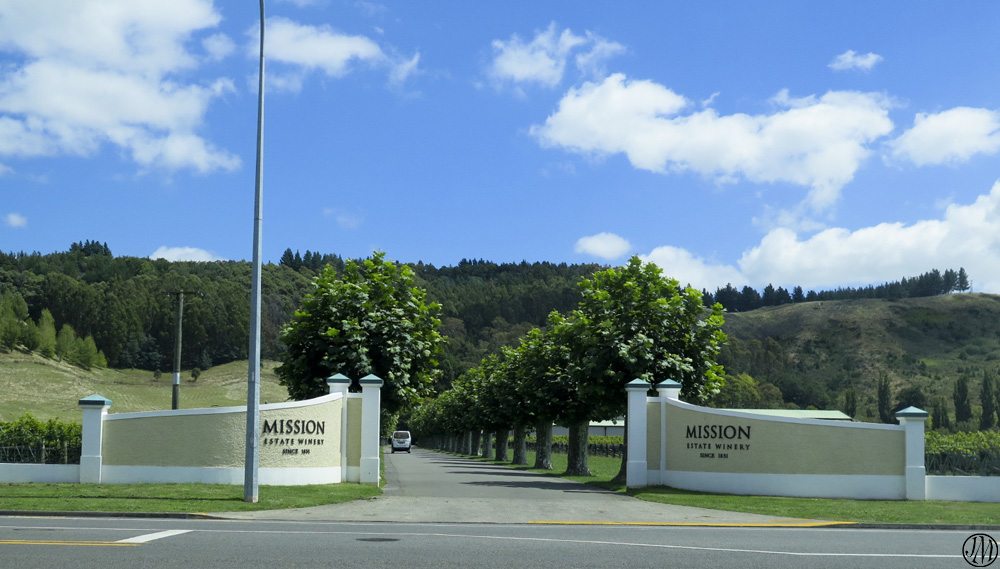 Back at sea level, we visited the Mission Estate Winery, which was established in 1851 by pioneering French Missionaries.
It is New Zealand’s oldest winery and considered as the birthplace of New Zealand wine. 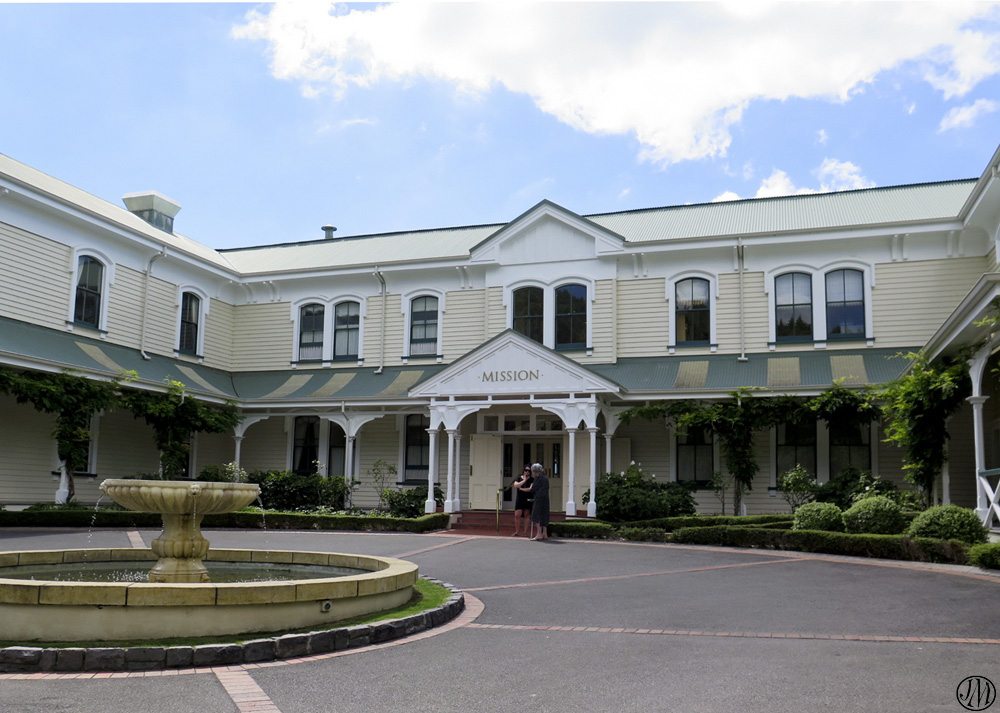 Entrance to the Mission Estate Winery. 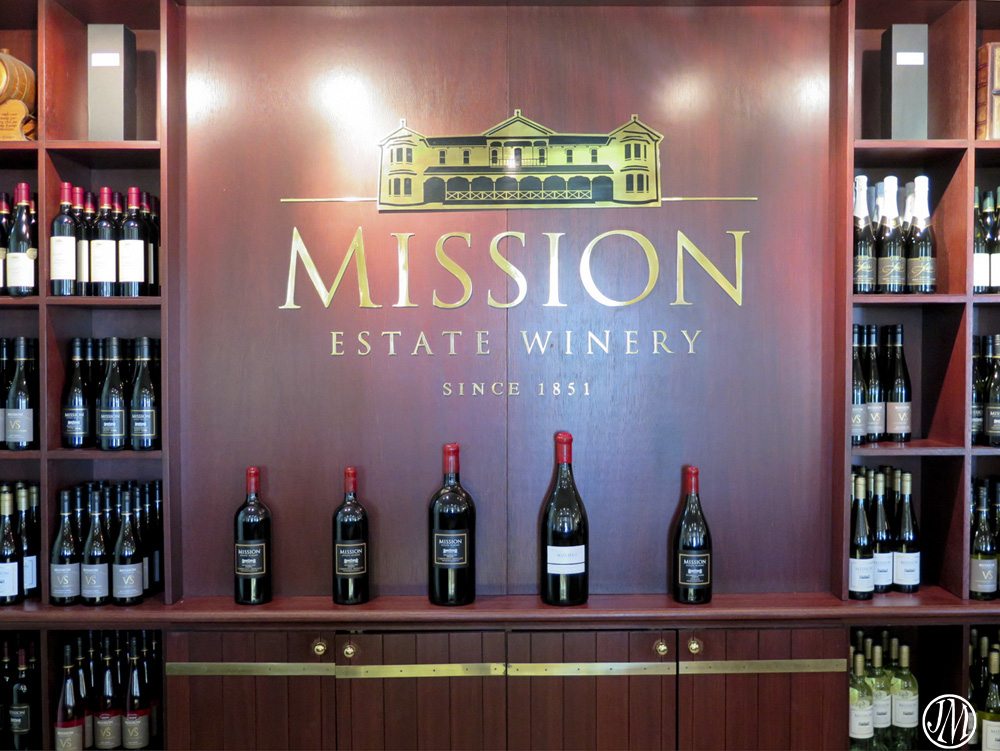 An impressive array of wines to taste and perhaps to buy … 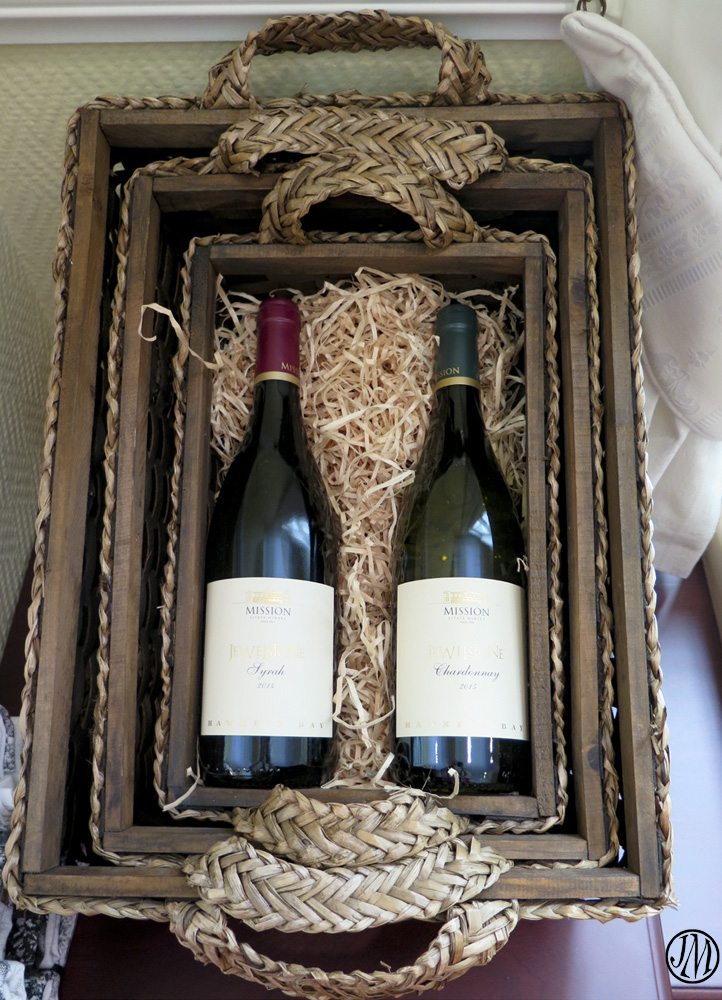 Beautiful boxes in which you might want to present the wines as a gift for friends.

John’s panorama of the front of the Mission Winery with many of the restaurant tables out in the garden. 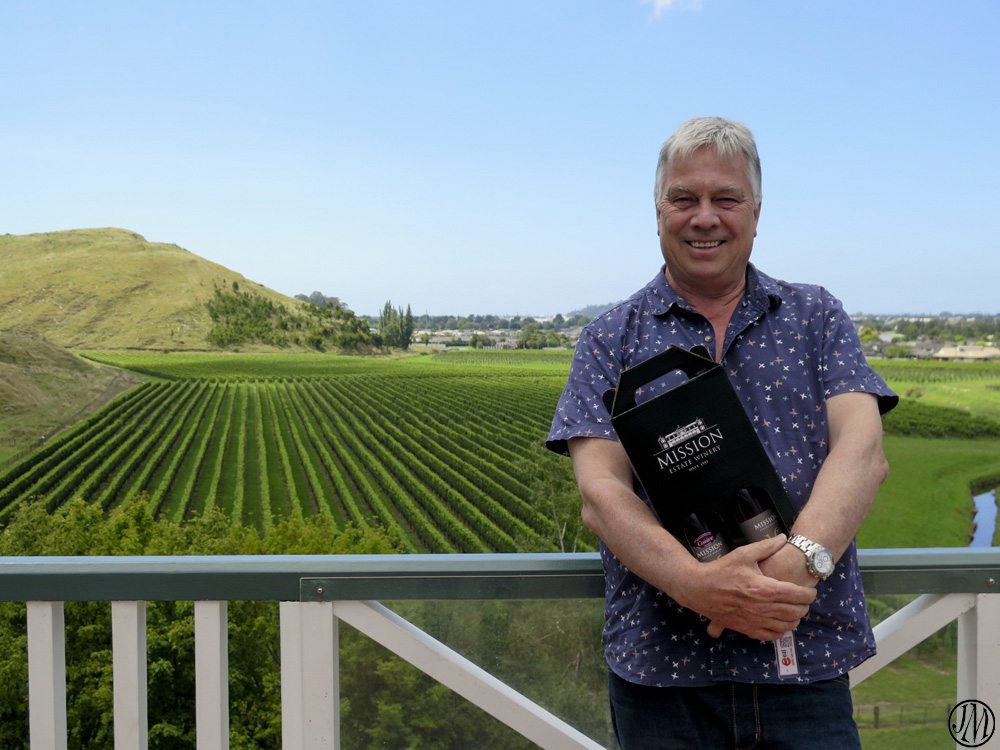 John happy with his purchases, and the view behind over some of the Mission vines. 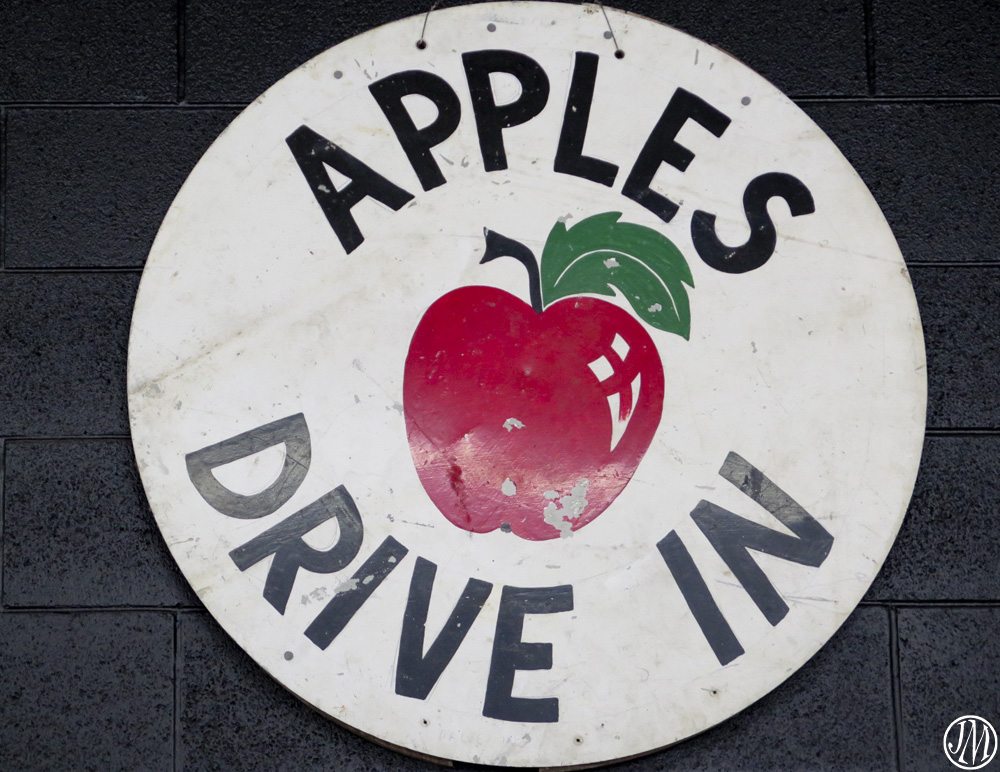 The Hawkes Bay area is also well-known for other fruit and while driving around we stopped off to get some fresh apples. 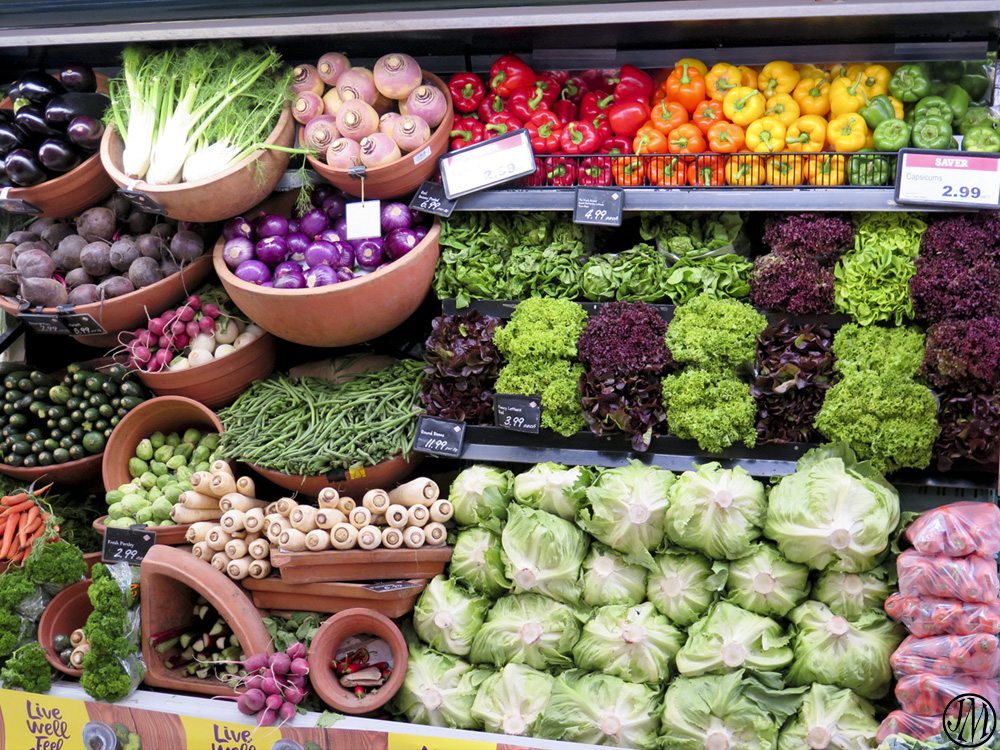 Lovely display of fresh produce in the Supermarket as well.  It’s something I haven’t mentioned but it is always fun
to spend time in the supermarkets of different countries to see what is on offer and how the prices compare. 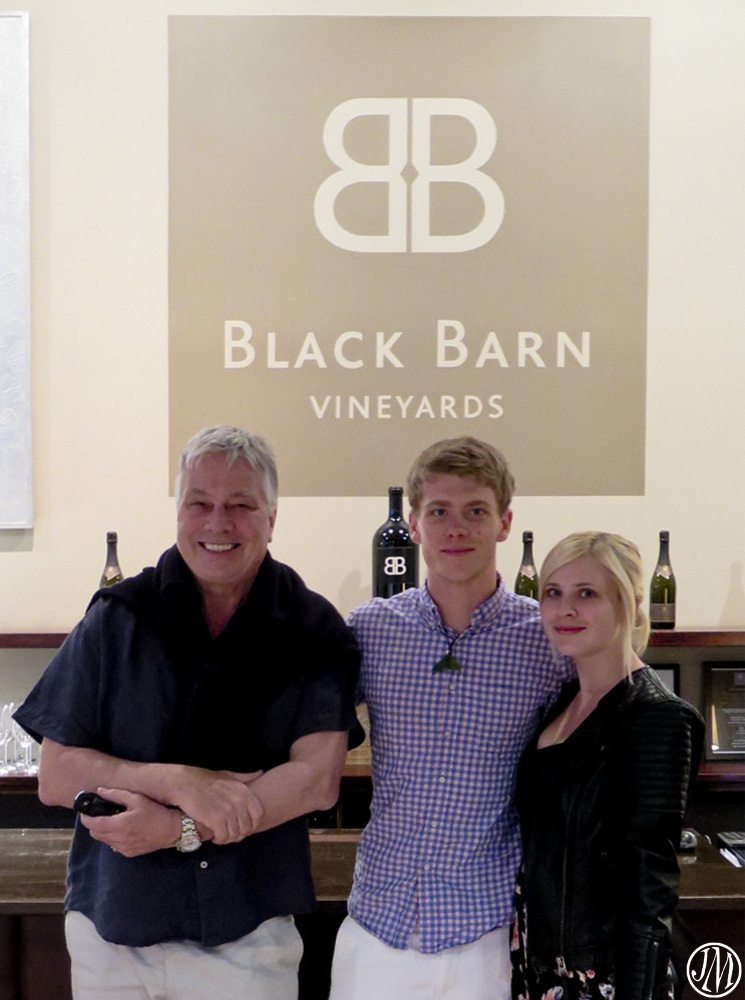 In the evening we met with two young friends, Sam and Miriam and shared a delicious meal at another of
Hawke’s Bay Wineries – this one was Black Barn. 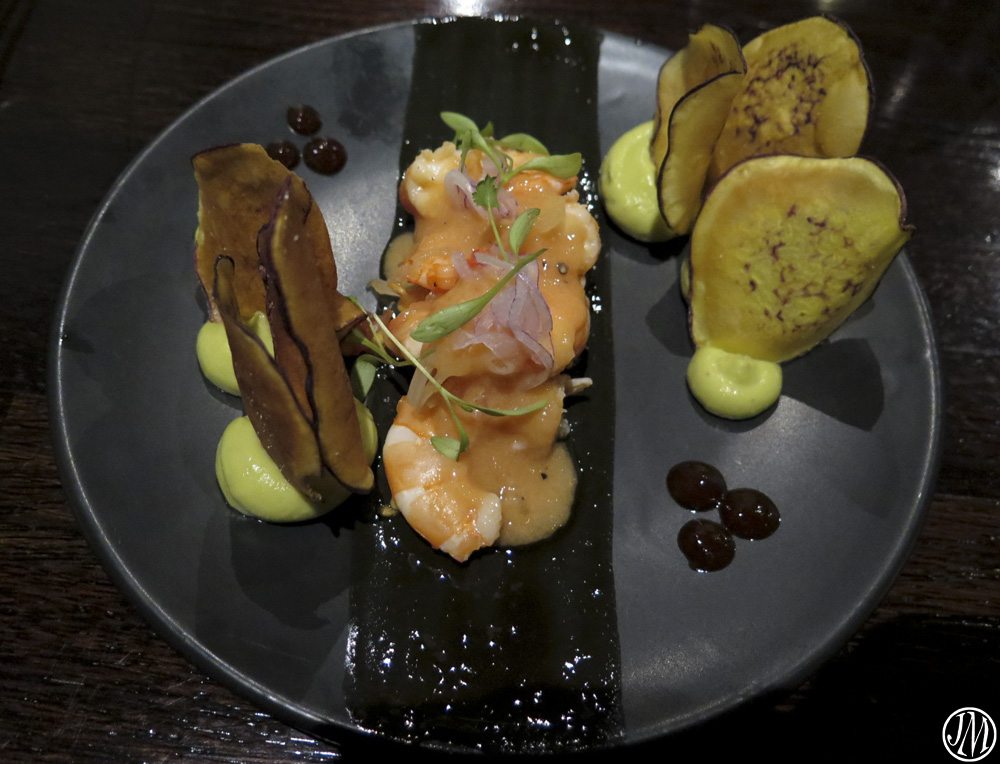 I had two starters and a dessert – so good!  This was my ceviche of shrimp with Kumara crisps. 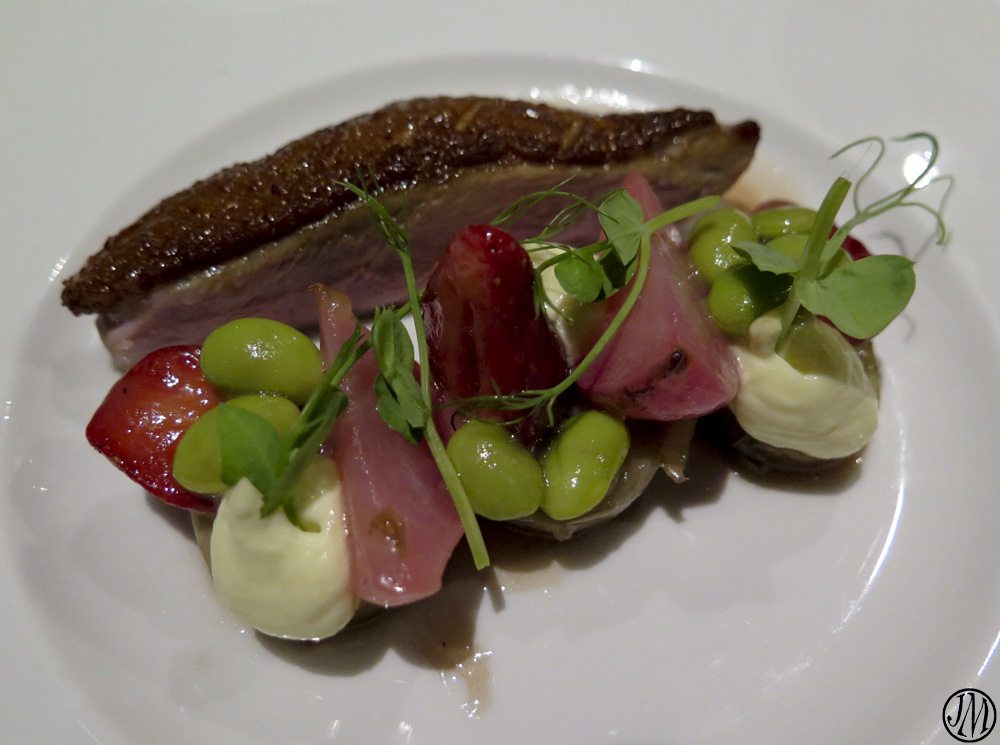 My second course was a duck salad with pears, grapes and strawberries with a horseradish cream dressing – yummy! 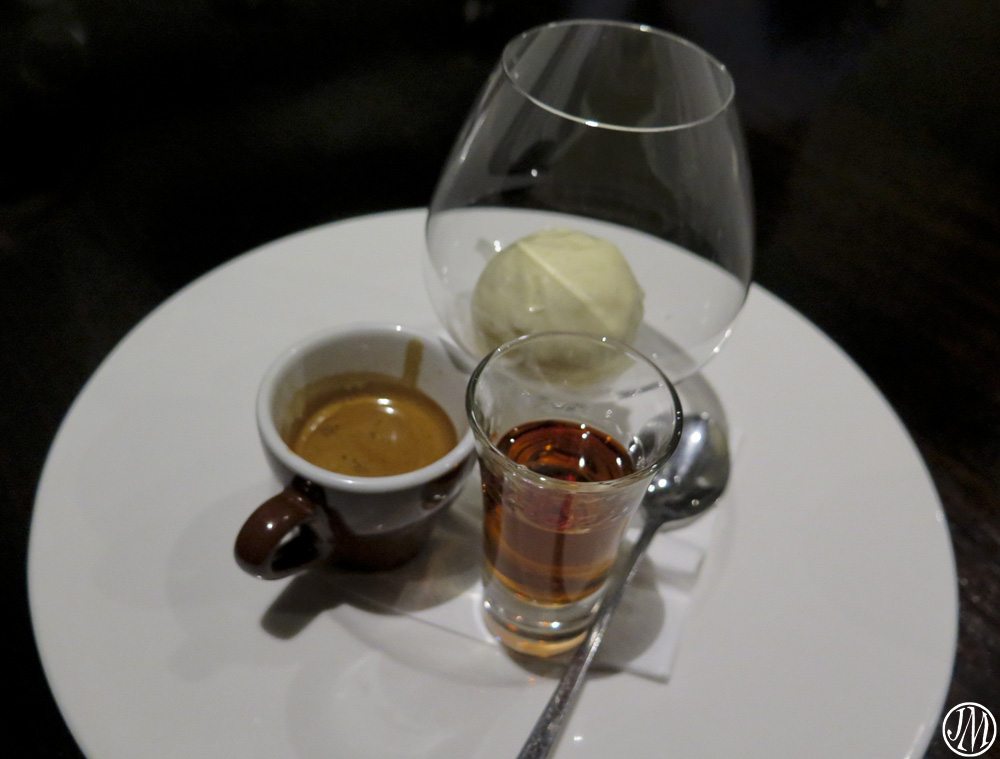 And to finish – an Affogato.  Ice cream, with a shot of espresso and another of Amaretto.  My new favourite dessert.

The next morning we were off to explore New Zealand’s geothermal region centred around Rotorua, but first stop was in Napier where we did a guided walk through the city streets and then viewed a movie for more information:   On 3 February 1931, most of Napier and nearby Hastings was levelled by an earthquake. The collapse of buildings and the ensuing fires killed 256 people. The centre of the town was destroyed by the earthquake, and later rebuilt in the Art Deco style popular at that time. About 4000 hectares of today’s Napier were undersea before the earthquake raised it some 2.7 metres.above sea level.

Although a few Art Deco buildings were replaced with contemporary structures during the 1960s, 1970s, and 1980s, most of the centre remained intact for long enough to become recognised as architecturally important, and beginning in the 1990s it had been protected and restored. Napier and the area of South Beach, Miami, Florida, are considered to be the two best-preserved Art Deco towns (with the town of Miami Beach, Florida, being mostly decorated in the somewhat later Streamline Moderne style of Art Deco). Beginning in 2007, Napier was nominated as a World Heritage Site with UNESCO. This is the first cultural site in New Zealand to be so nominated, but it was denied World Heritage status in 2011 as it did not meet the appropriate criteria. Still, the report of the application acknowledged the Art Deco heritage as “first and foremost of outstanding value to all New Zealanders”.

Thousands of people flock to Napier every February for the Tremains Art Deco Weekend event, a celebration of its Art Deco heritage and history, with concerts by the bay, tea-dances and parades and much more, with seemingly the whole population dressed a la 1930s.  Unfortunately for us, this year’s event had happened the week before we visited. 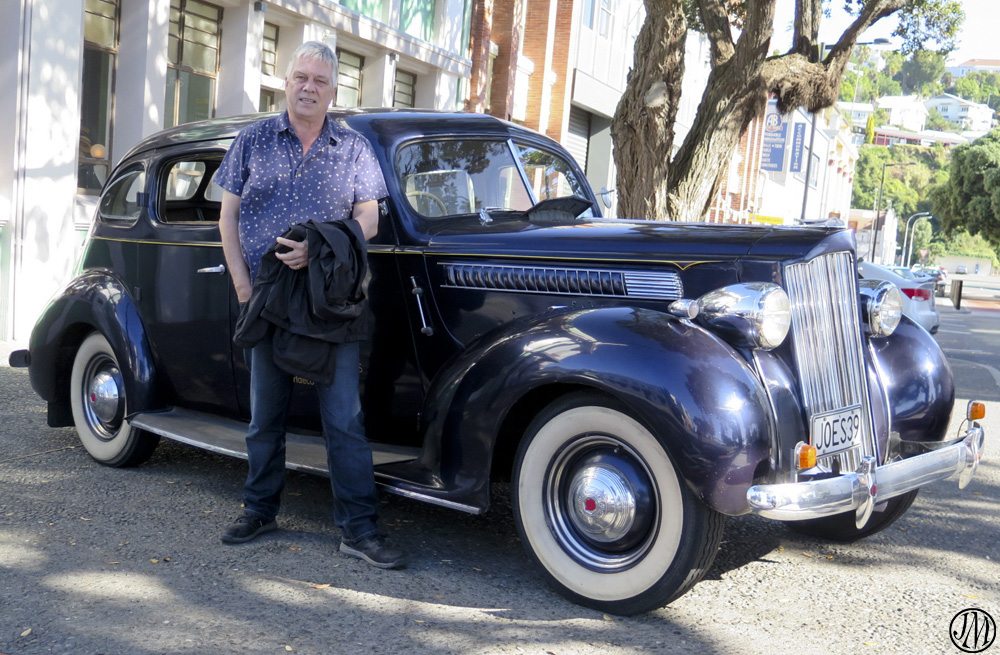 One of the beautiful vintage cars which survive and add to the ‘glamour’ of the era. 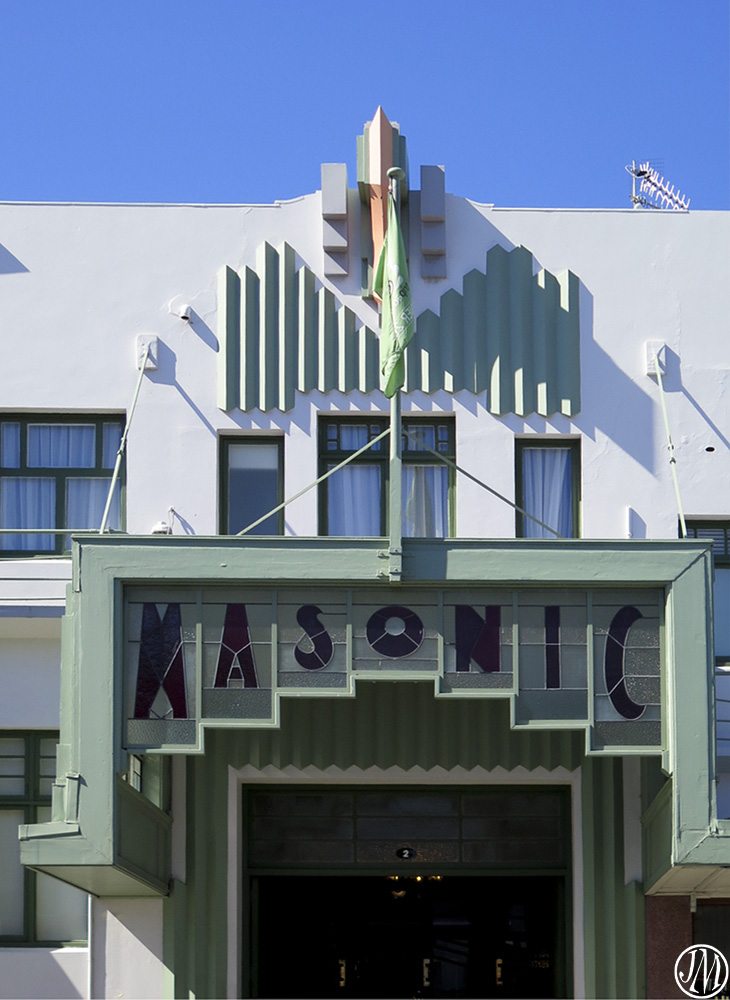 One of the theatres with an art deco facade. 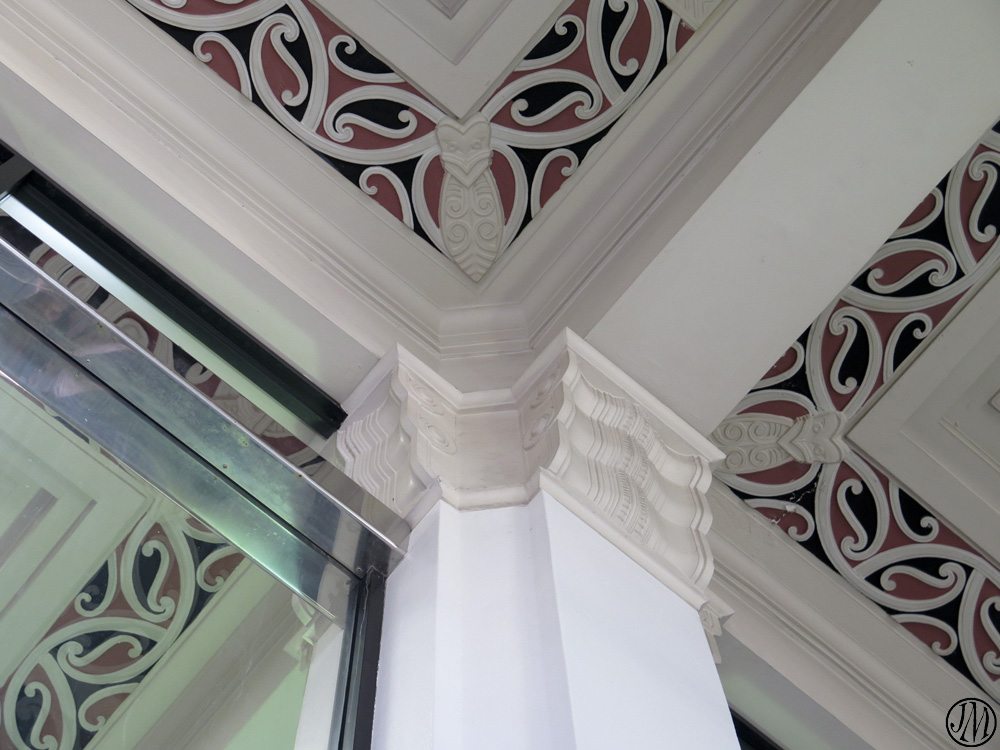 An interesting detail of the ceiling of a bank – art deco married with more traditional Maori motifs. 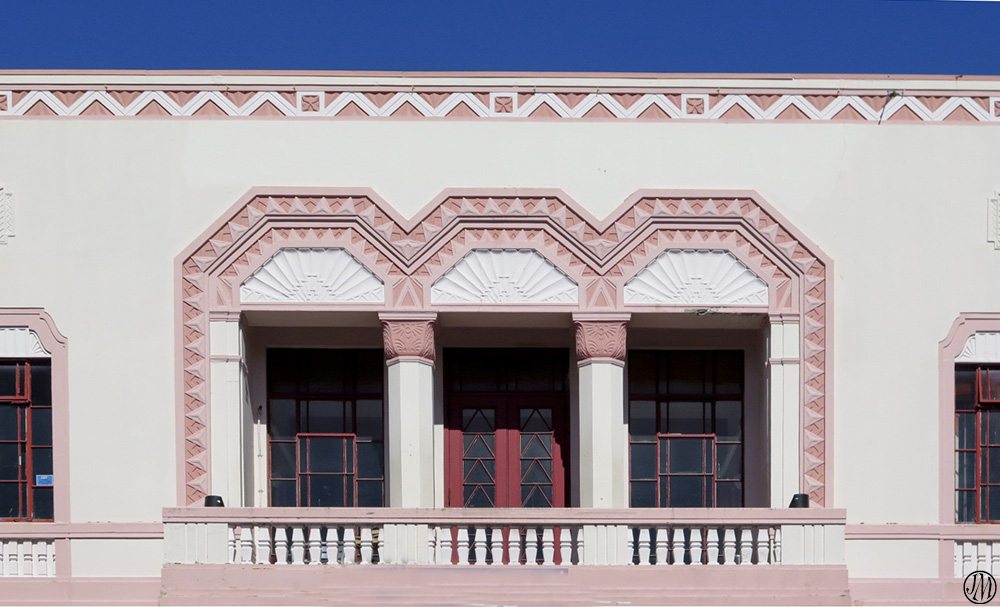 The upper storey and balcony of an old hotel, now for sale and awaiting renovation. 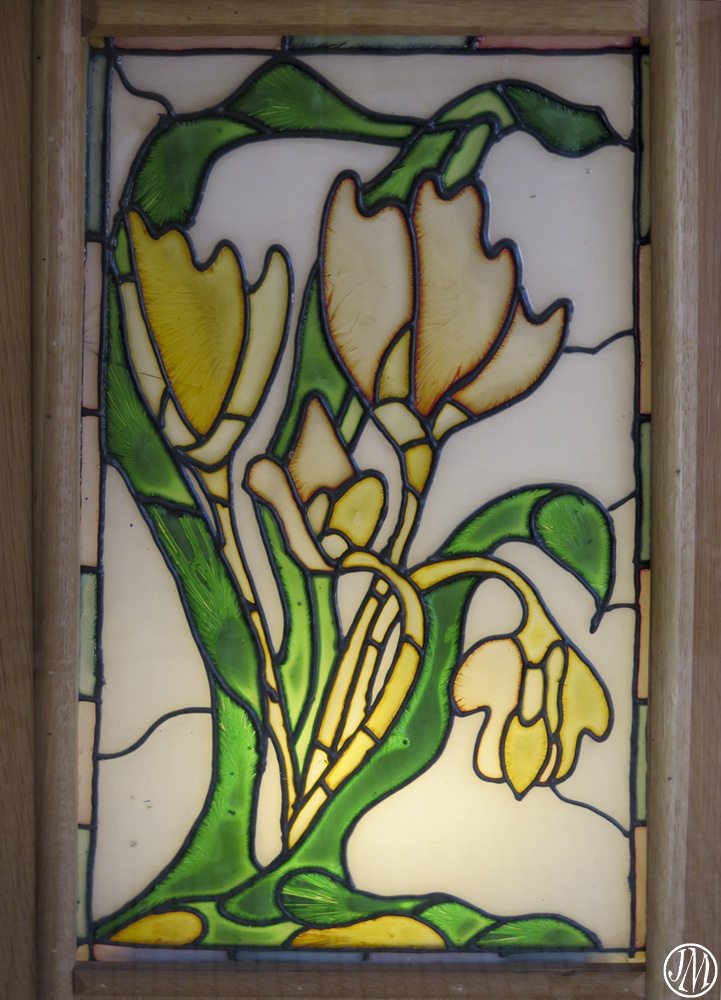 A beautiful pattern, still a part of the window design of a jeweller’s shop. 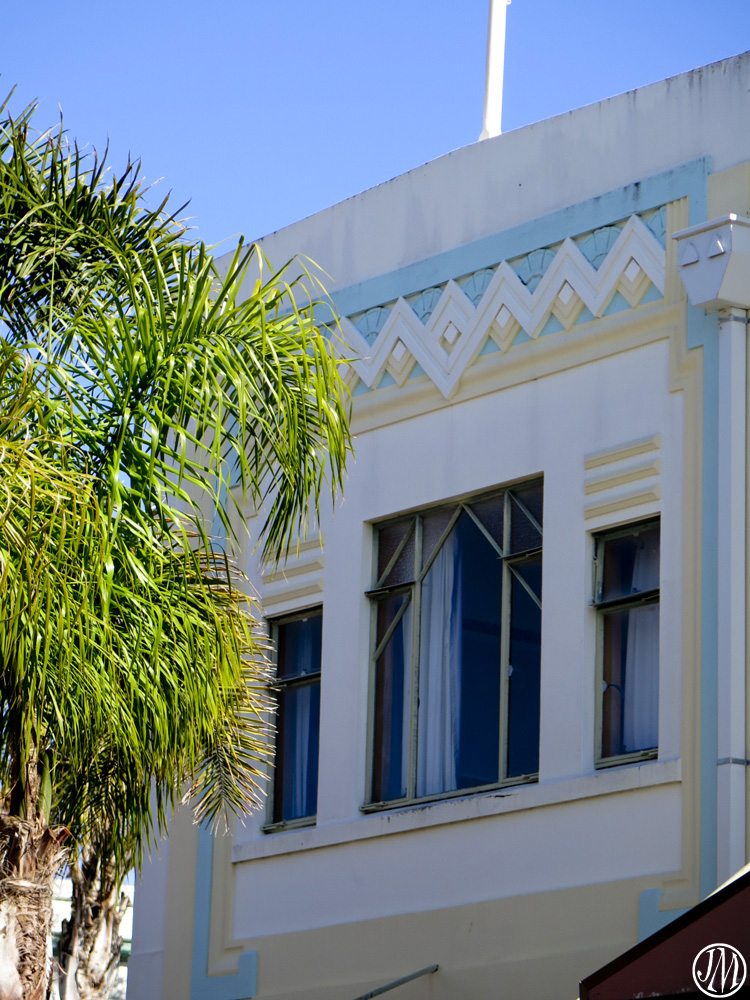 The second floor of a corner shop, with the art deco design still very evident. 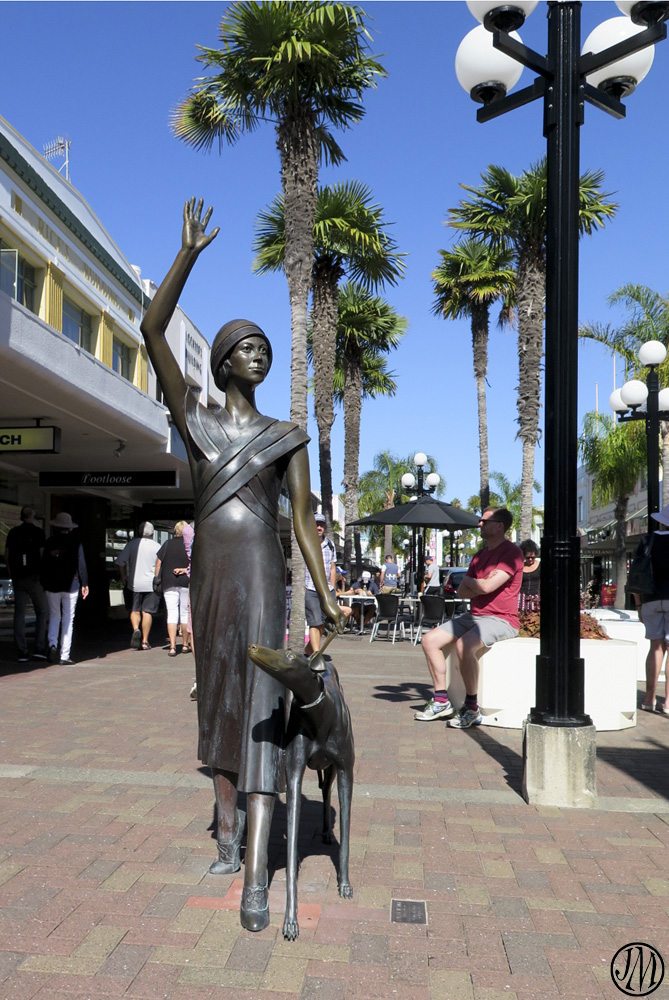 One of Napier’s high society women in the 1930’s, now forever captured in bronze with her dog, and waving to a
little boy – also a bronze sculpture, who is climbing a lamp-post.  Sorry I didn’t capture him as well.

Part of the striking facade of ‘The Daily Telegraph’ building. 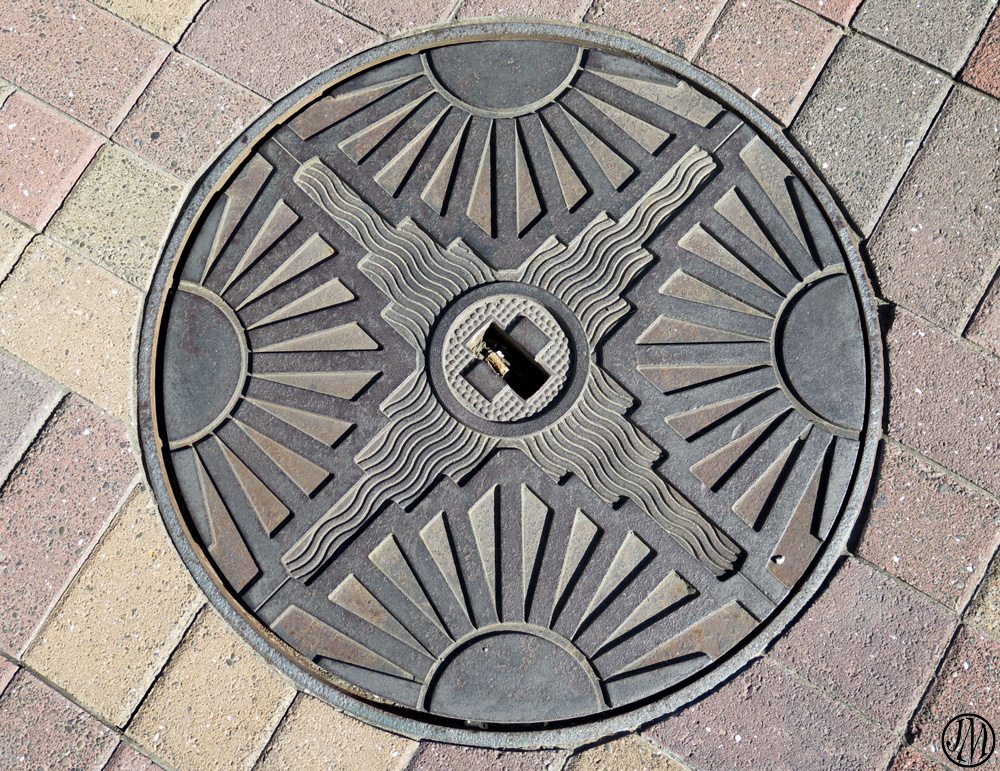 Even the manhole covers in the city streets are decorated in the same style. 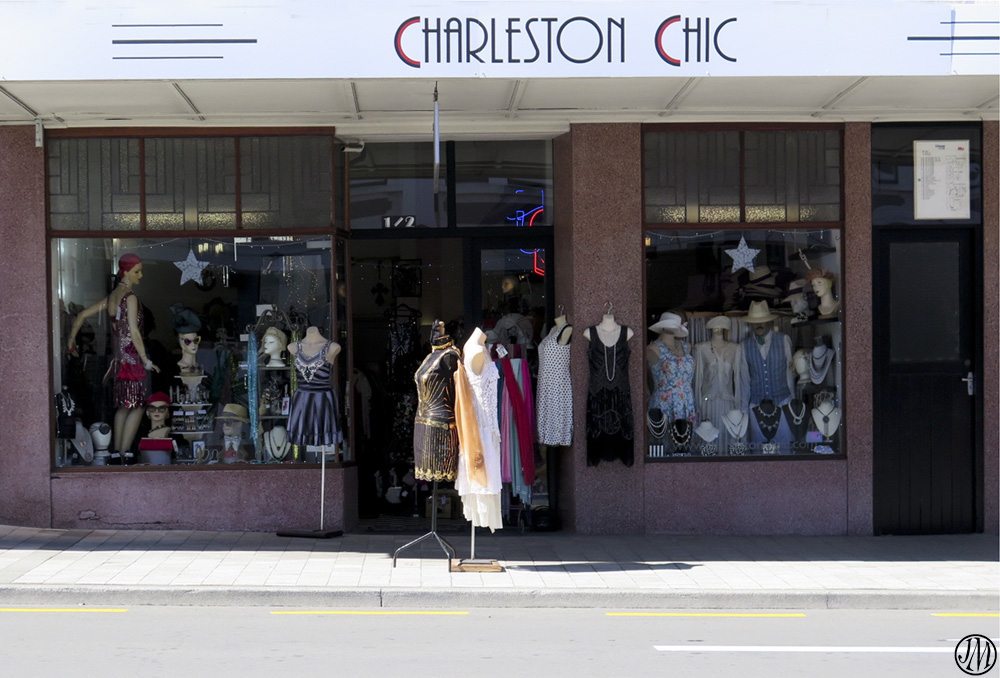 And if you’re looking for an outfit for the special Art Deco Week or perhaps for a private party – here’s where to go. 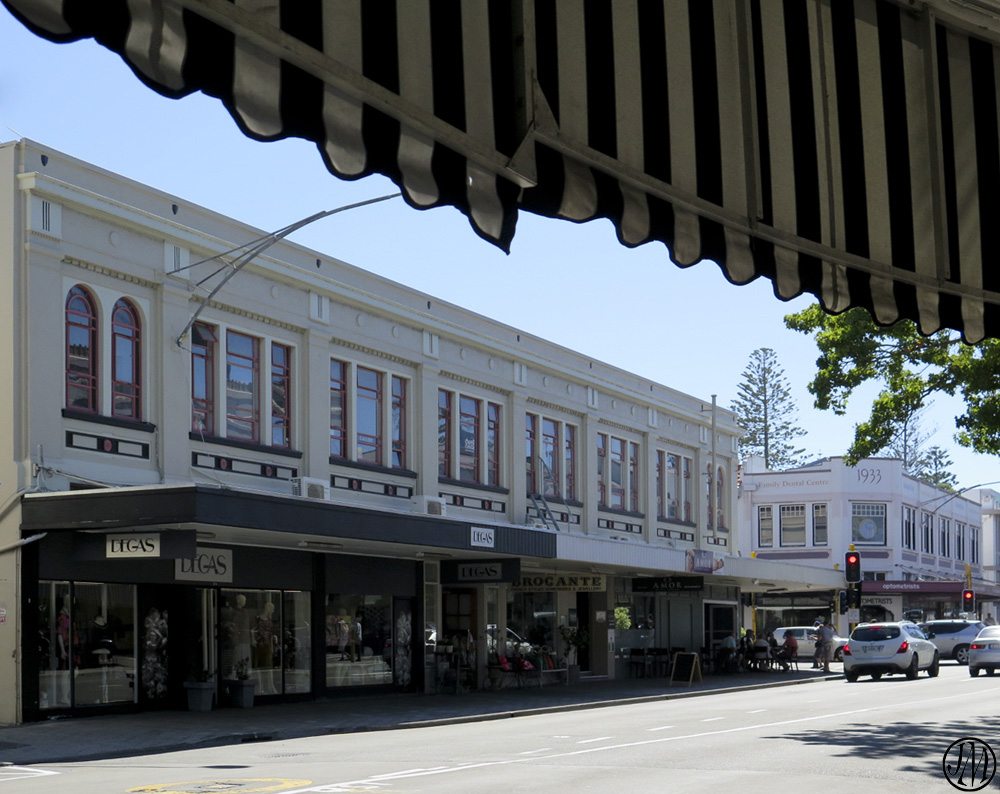 Downtown Napier with the building still pretty much as they were built in the 1930’s. 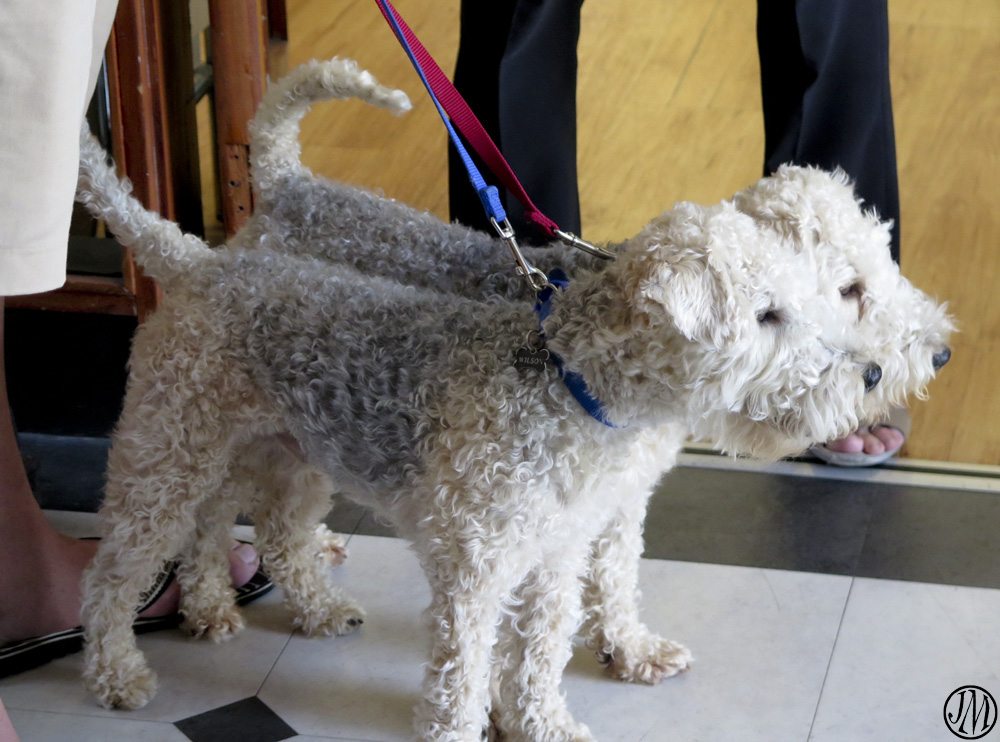 My last picture from the lovely city of Napier has nothing to do with Art Deco, but I just loved these two dogs, brother & sister perhaps, and both intent on something off-photo, and clearly patiently waiting for their owner to stop chatting with a friend.