Revisiting the Solomon Islands, 50 years on #1

Revisiting the Solomon Islands, 50 years on #1

This month I had the wonderful experience of revisiting the Solomon Islands, fifty years after I taught there as a young volunteer.  I spent a couple of days in Honiara, exploring the city, meeting a few people who have been my contacts, visiting the local market and a weaving festival. Honiara was buzzing with a lot of soldiers and veterans mainly from the United States, Australia and New Zealand, but also Japan who were there to mark the 75th anniversary of the landing of the Allied Forces on Guadalcanal on 7 August 1942, the first step in the Battle of Guadalcanal that was to become a turning point of World War II in the Pacific. I well remember when I was there in 1967 visiting ‘Hell’s Point’ south of Honiara where a square mile was fenced off with TABOO marked everywhere as it was a dump for mines and unexploded ordinance left after the war. I understand that although some have been cleared, there is a large area still remaining untouched. The week was a time to commemorate the forces and the fallen, from all sides and also all the local scouts, guides and warriors without whom the Allies would not have succeeded.

For those of you whose geography of the South Pacific is a little hazy, here is a map showing its position and the major islands. 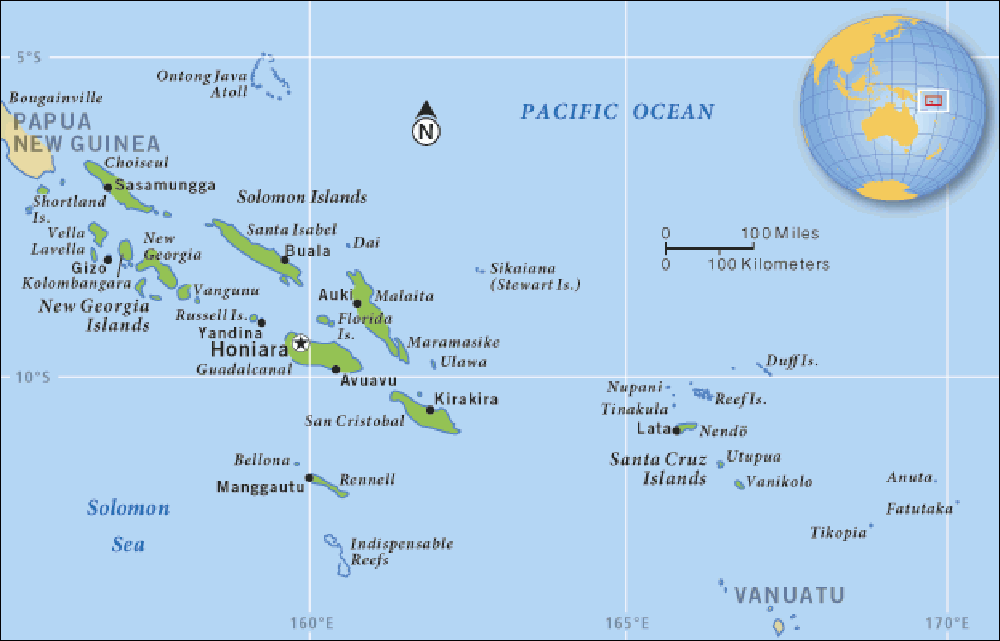 I flew in from Brisbane, just a three-hour flight, and we had a great view as we approached Guadalcanal from the south, and then along the northern coastline, flying from the west over Honiara and on to Henderson Airport. 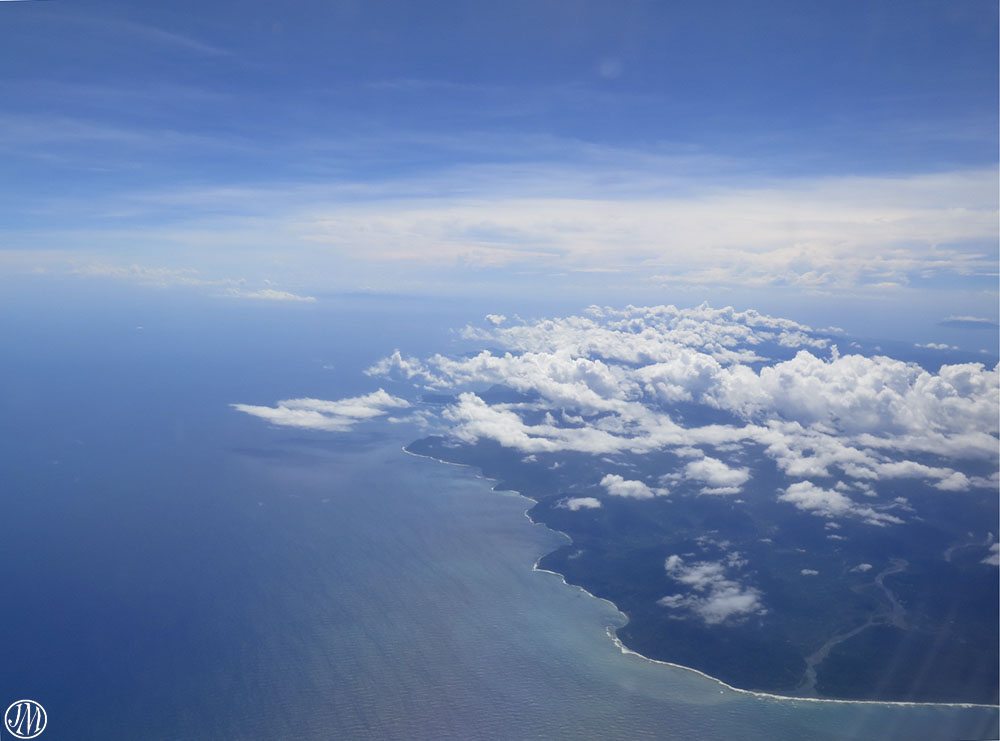 The first view of the southern coast of Guadalcanal. 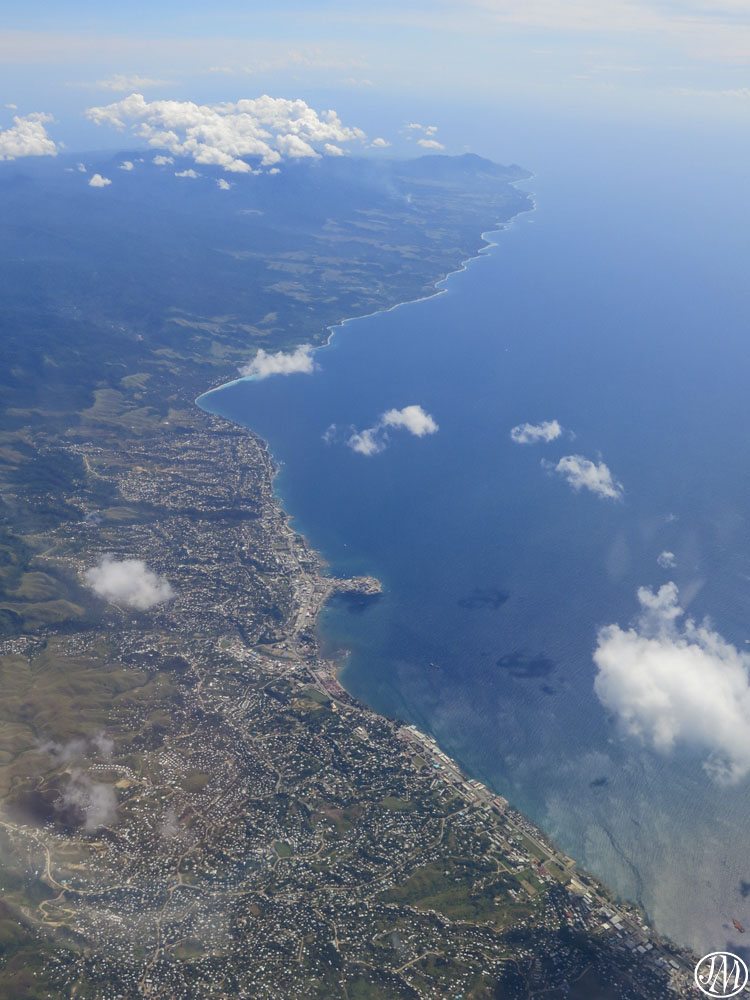 Looking westwards along the north coastline with the capital city Honiara in the foreground. 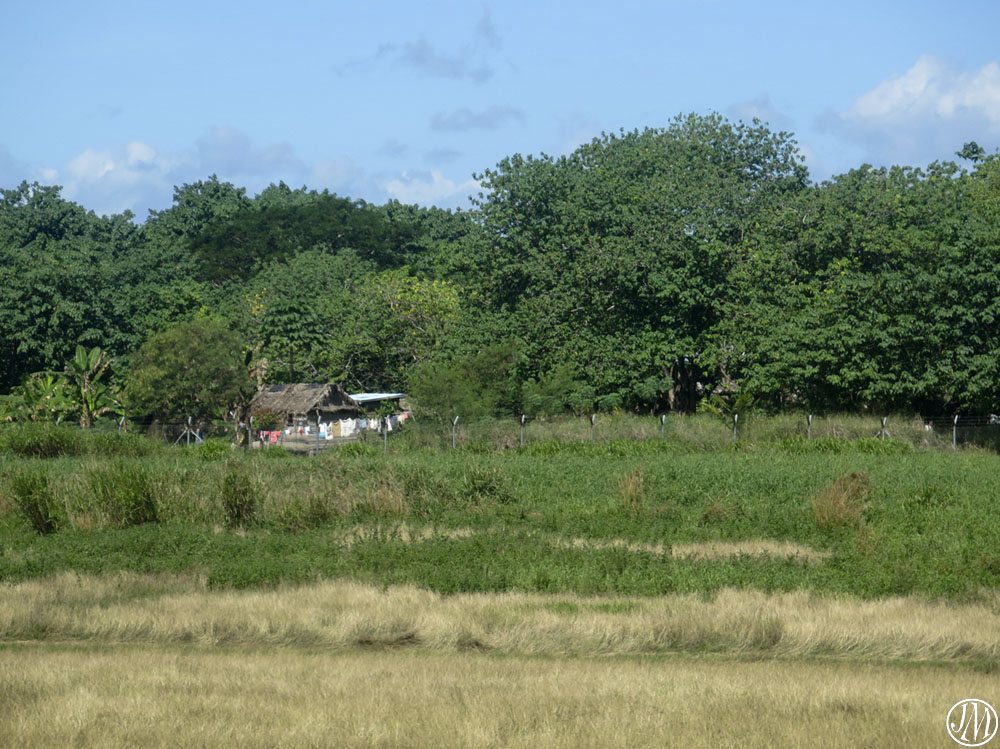 No, not the airport building – just a house and washing out to dry alongside the runway at Henderson Airport.

The photos in this first blog of several, are of a visit to the morning market where business was humming, the people were friendly and sometimes chatty and I was able to recall some of the colourful Pidgin language which is the common tongue, the Solomons having more than 70 different languages throughout the country. 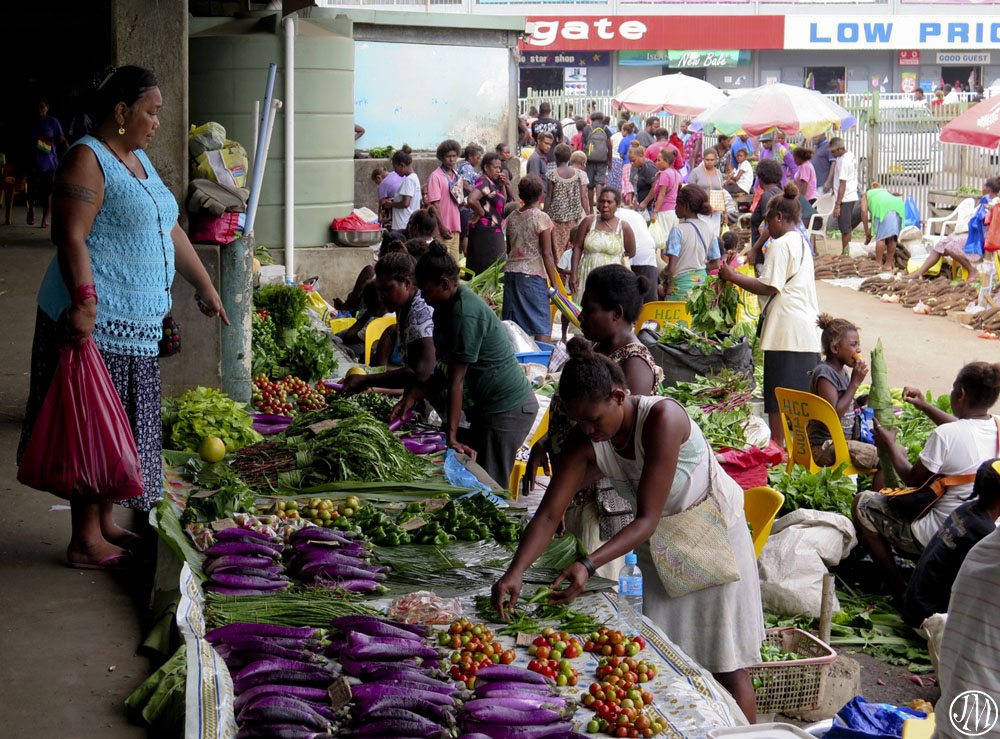 Plenty to choose from at the market,  I’ll have that pile, please. 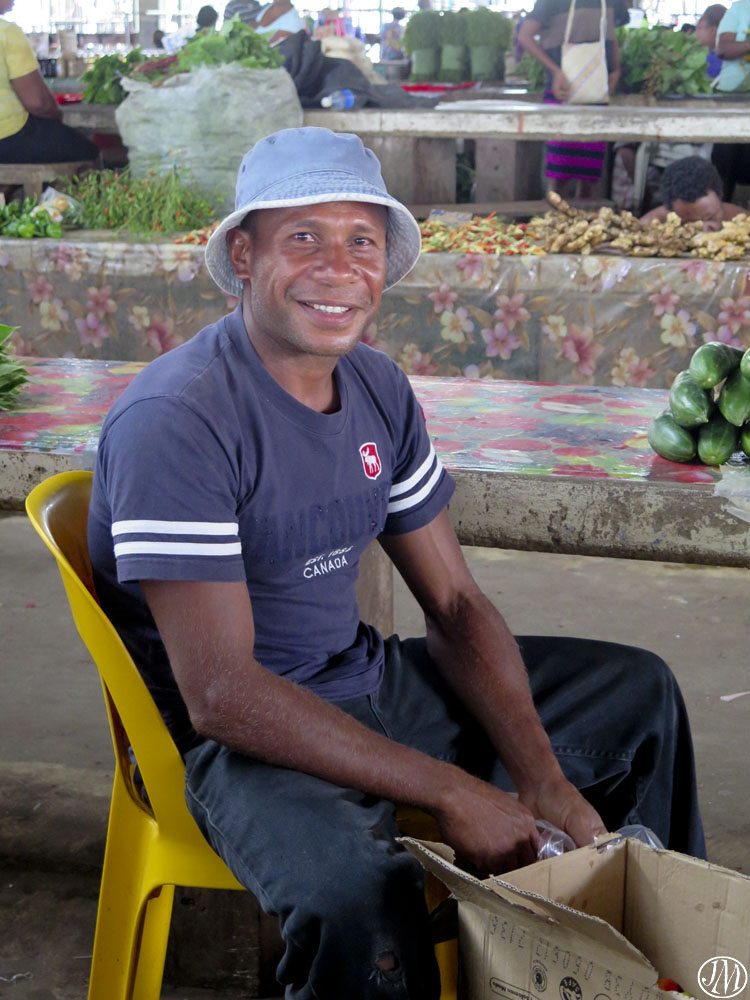 A friendly bloke setting out his fruit and vegetables. 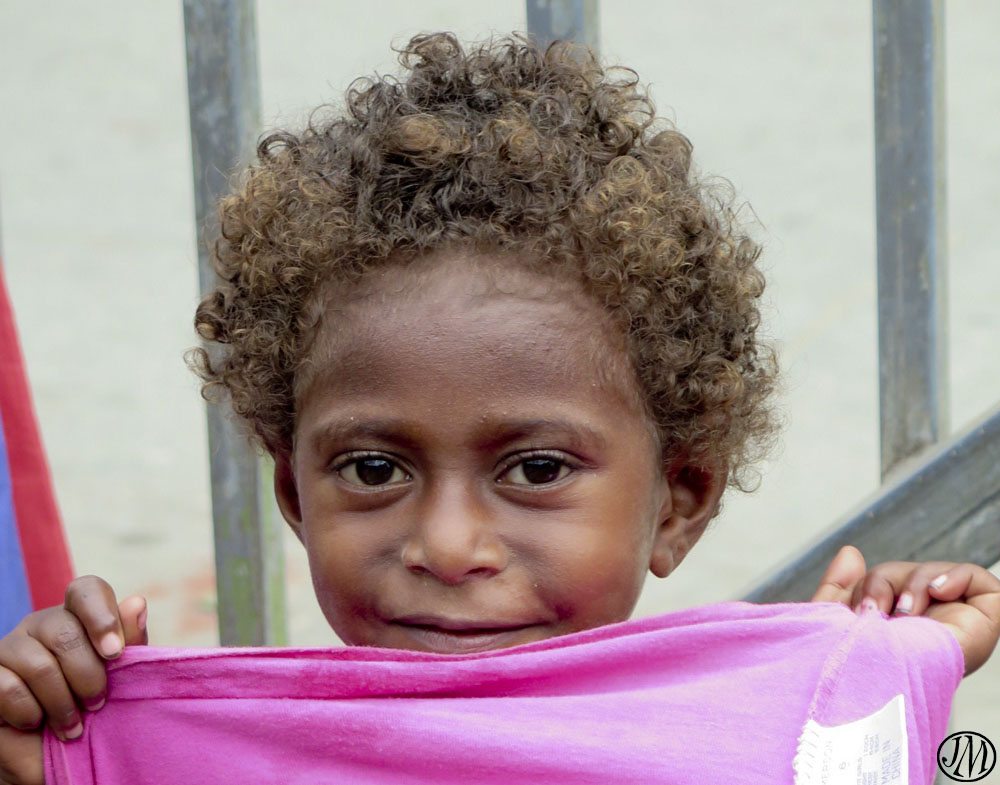 A shy young girl plays peek-a-boo with me, hiding behind her raised t-shirt. 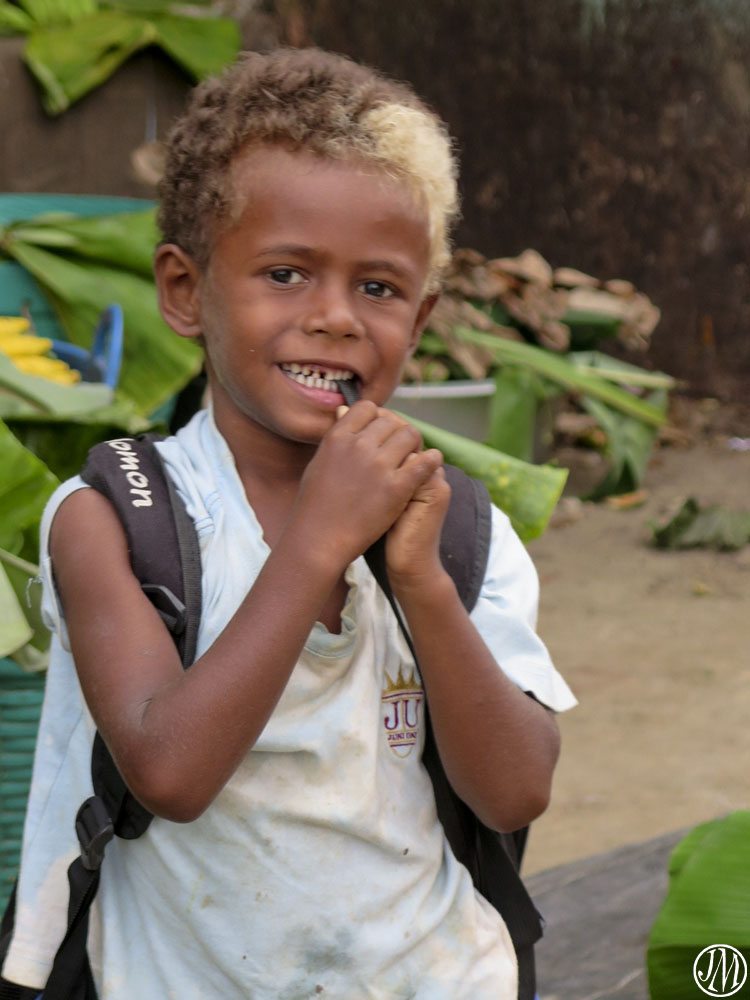 A schoolboy waits for his bus outside the market. 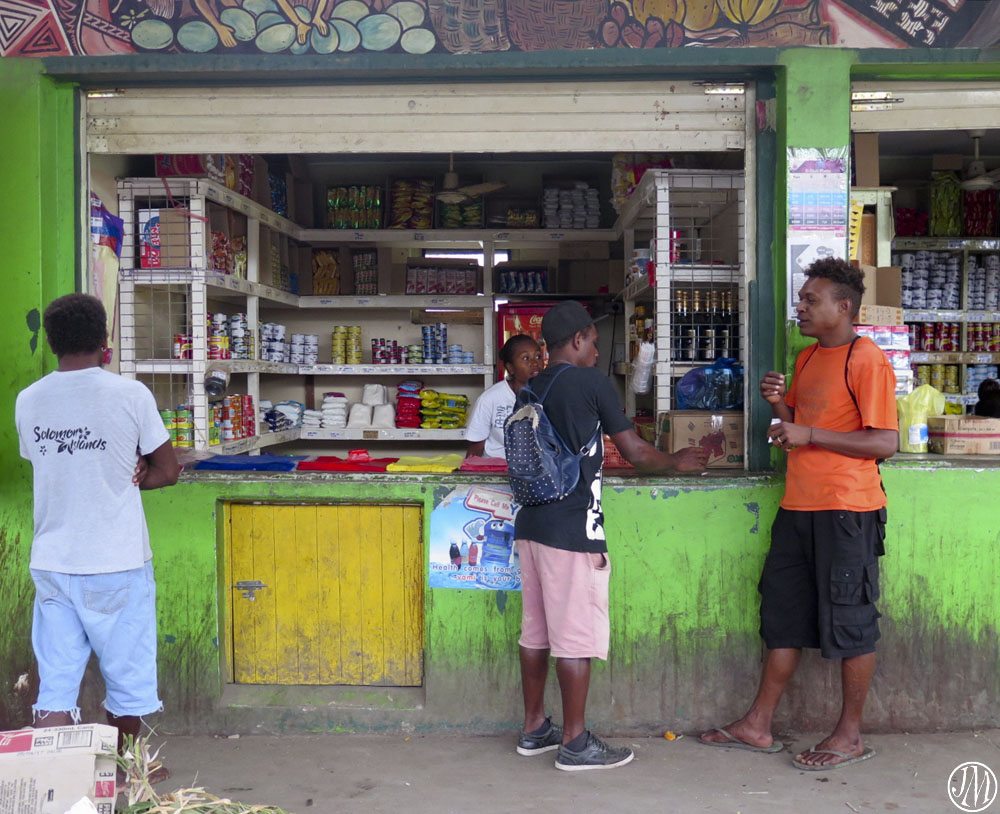 Time for a chat with friends at one of the side kiosks around the market. 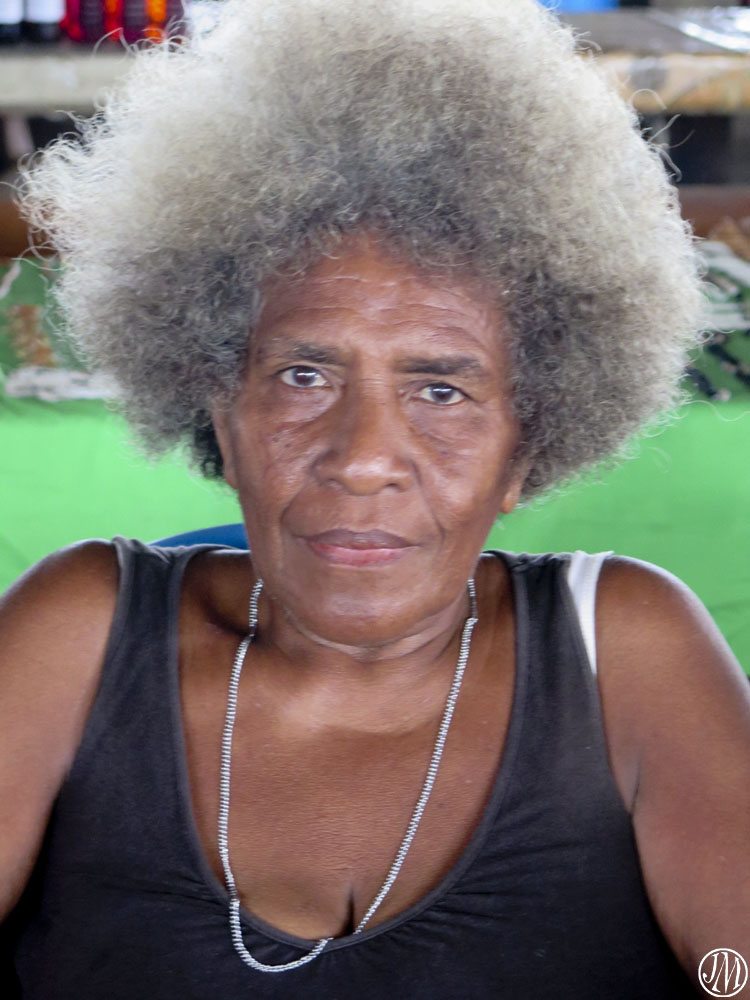 An older woman waits for customers at her stall. 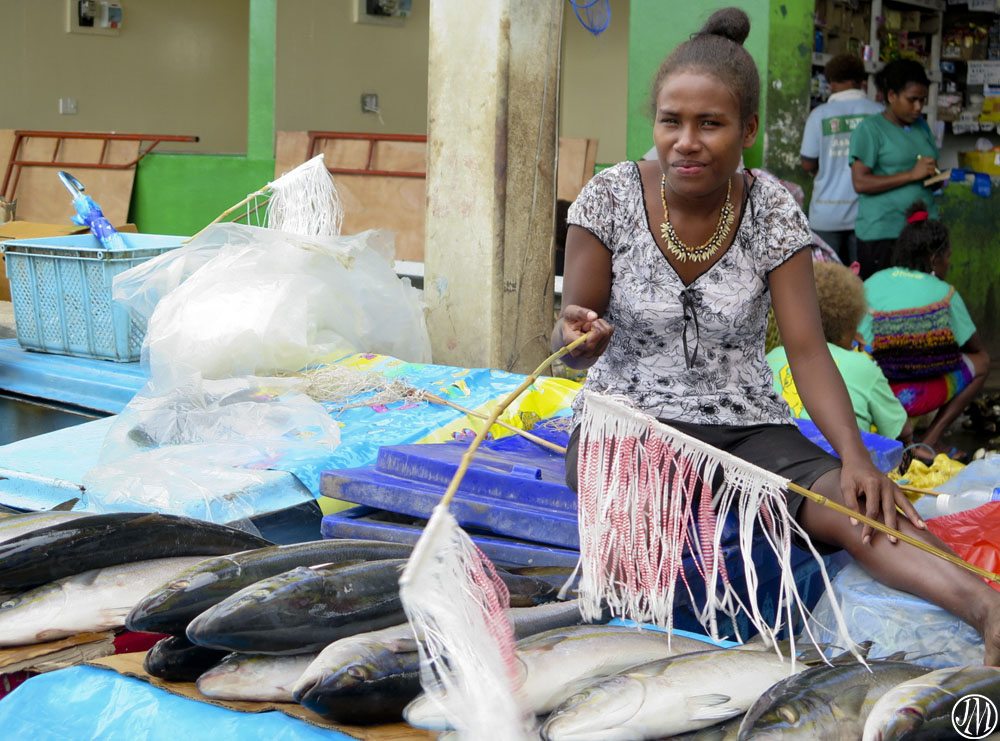 Right alongside the harbour, the fish is about as fresh as it can be. 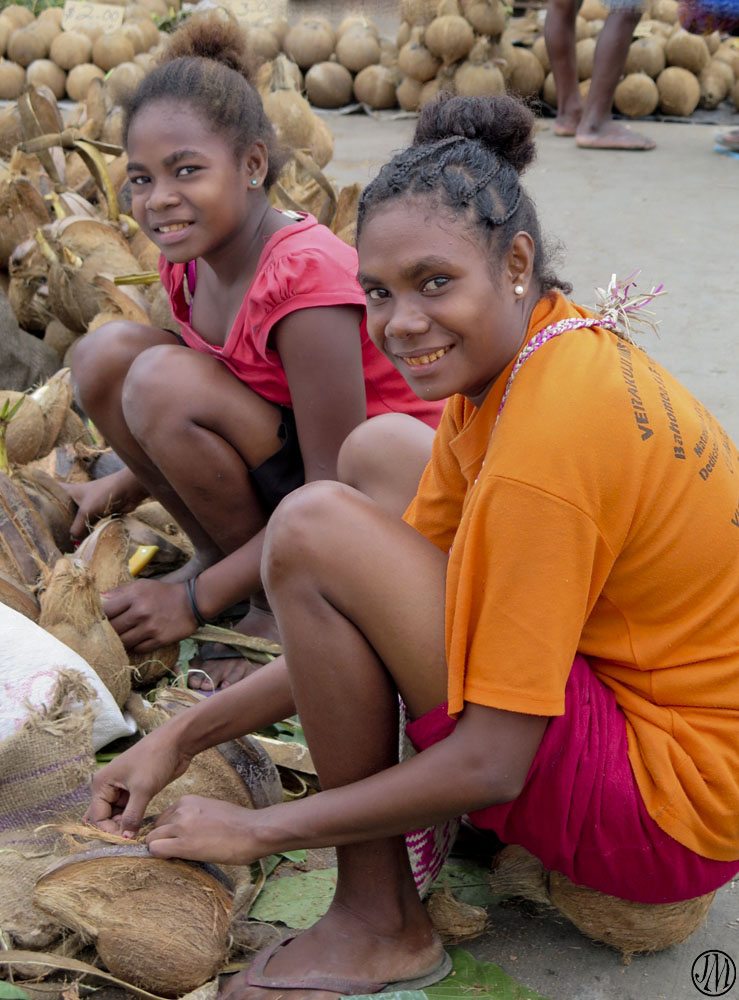 Coconuts, coconuts galore, even useful as a seat. 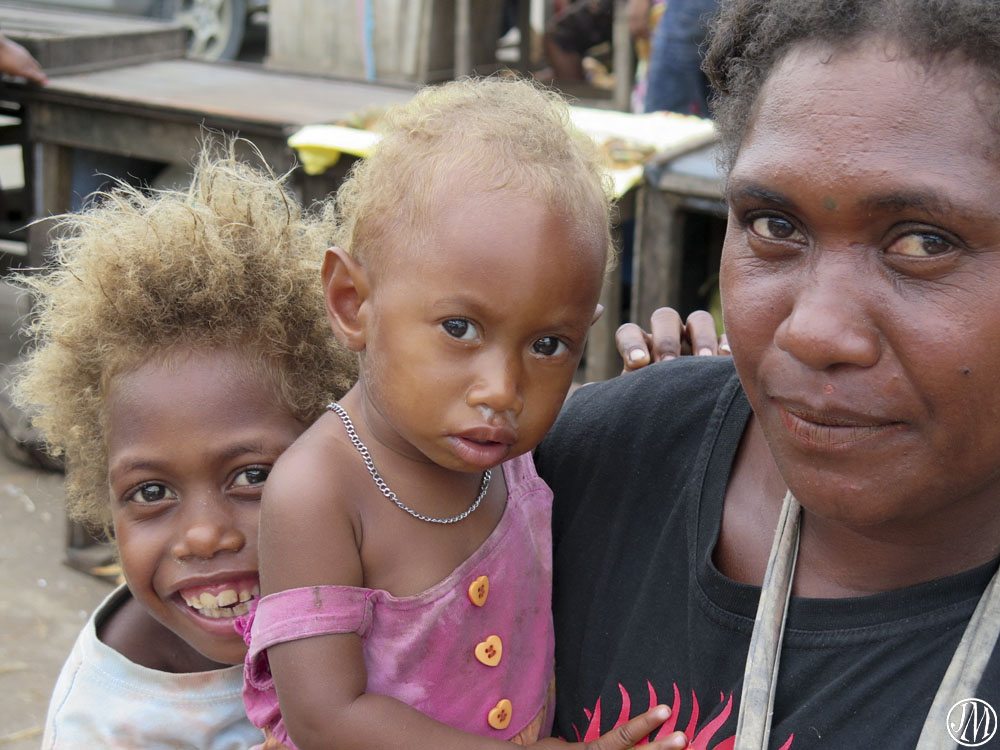 A little family smiles for the camera. 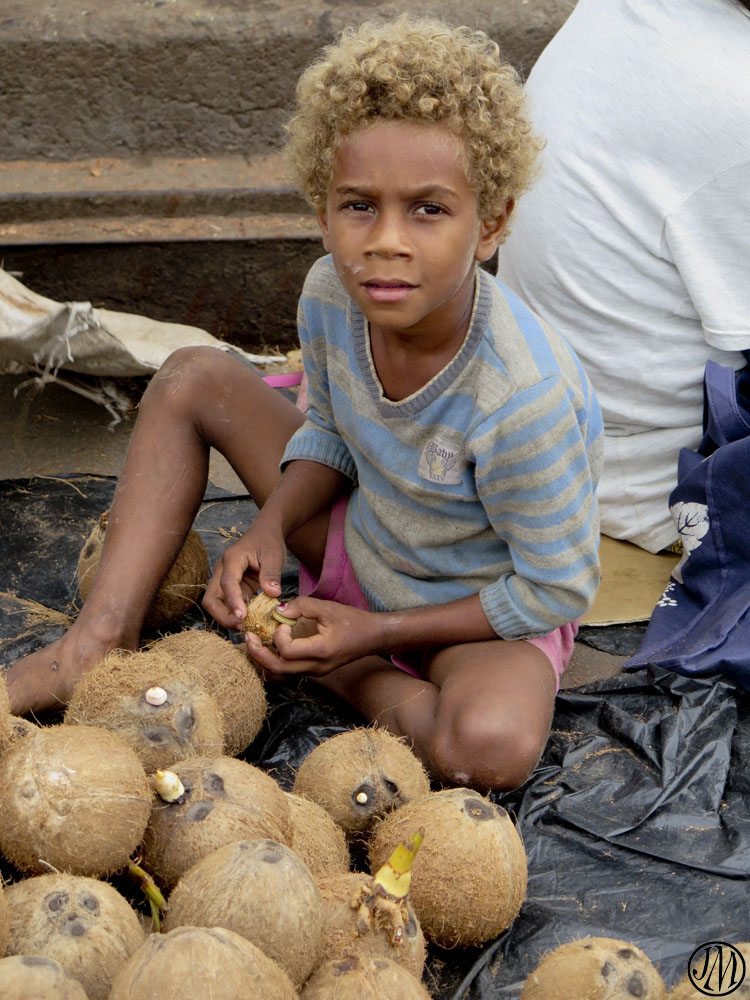 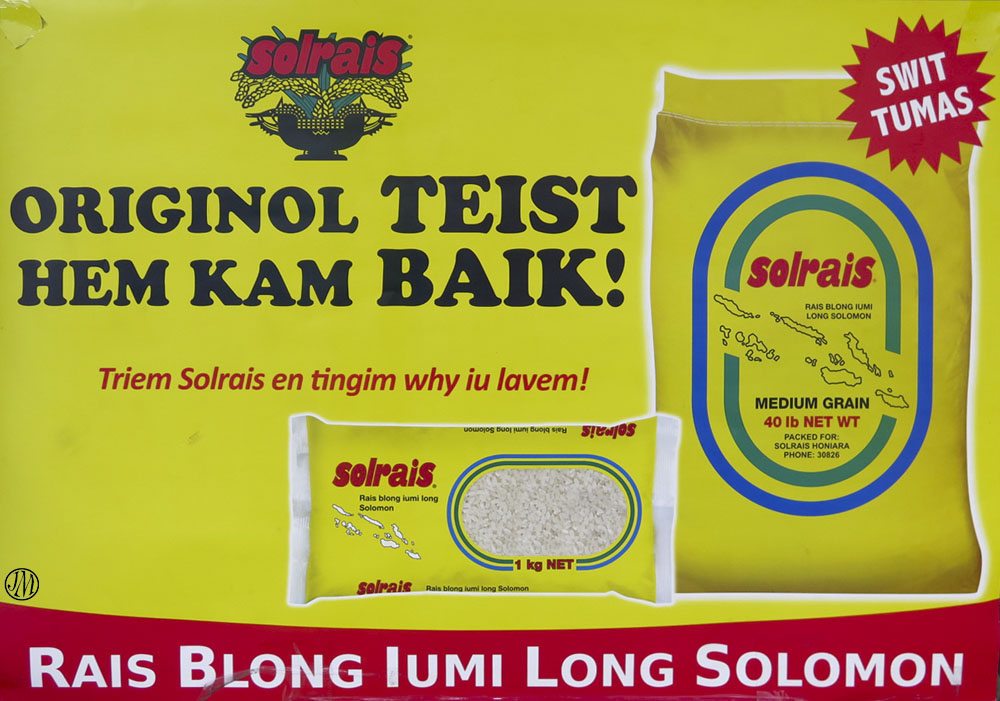 … and rice. Can you read the Pidgin?  A quick translation: Swit tumas – very sweet.
Originol teist hem kam baik – the original taste – it’s back.
Triem Solrais en tingim why iu lovem – try the Solomons rice and realise why you love it.
Rais blong iumi long Solomon – this is our Solomon Island rice. 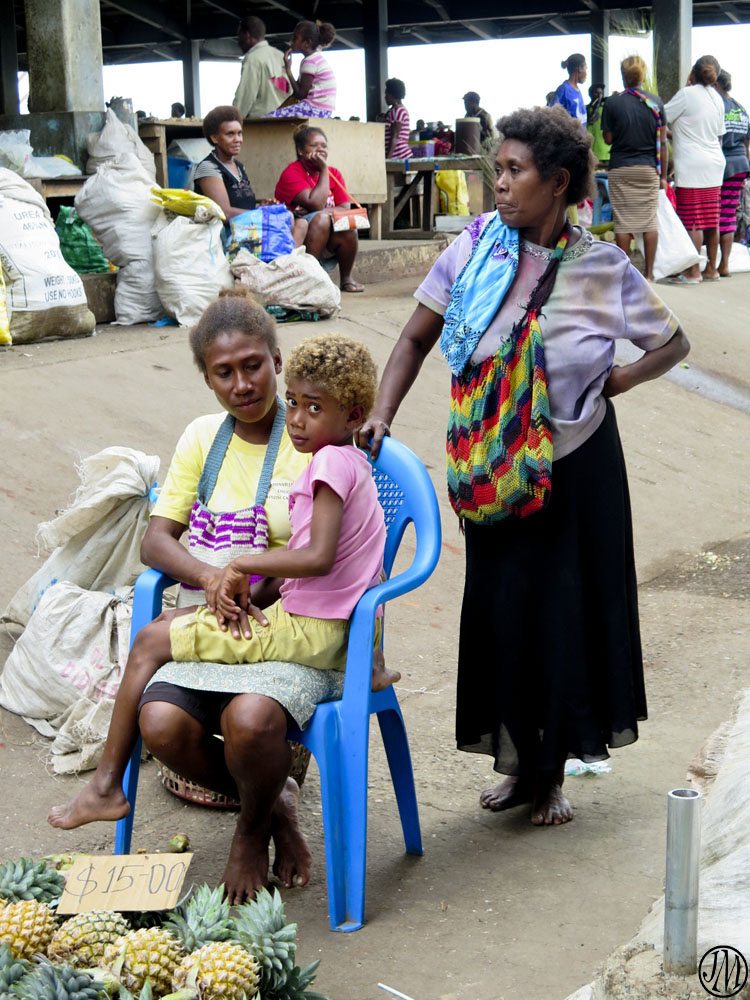 Three generations of women watching over their pineapples. 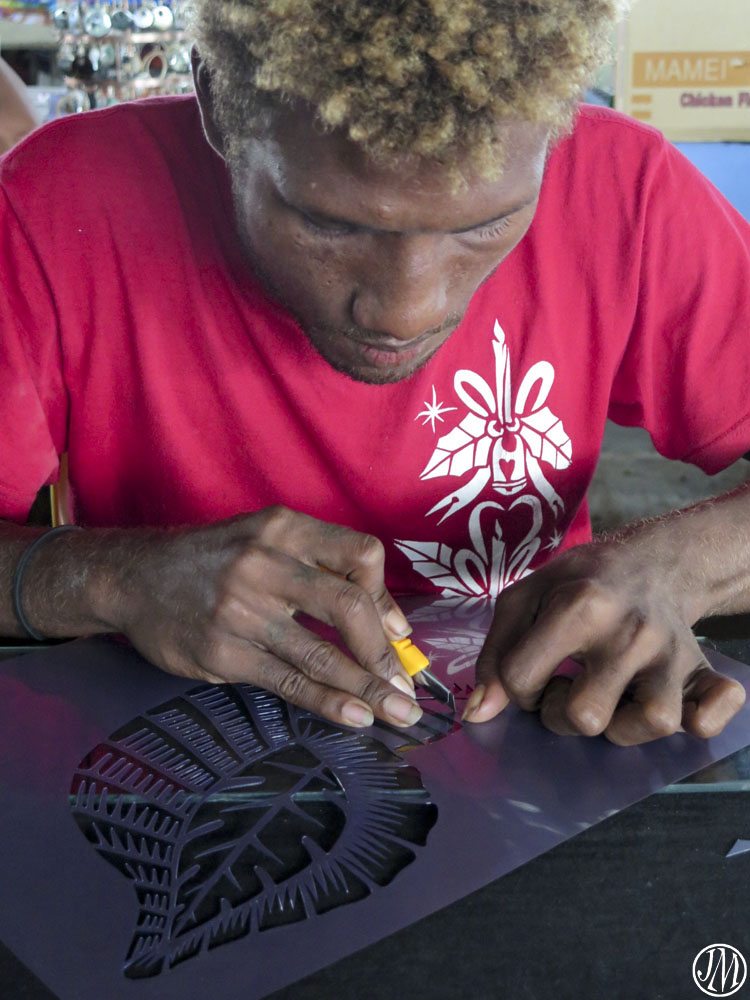 A skilled young man working on an etching which will later be used to print onto a cloth. 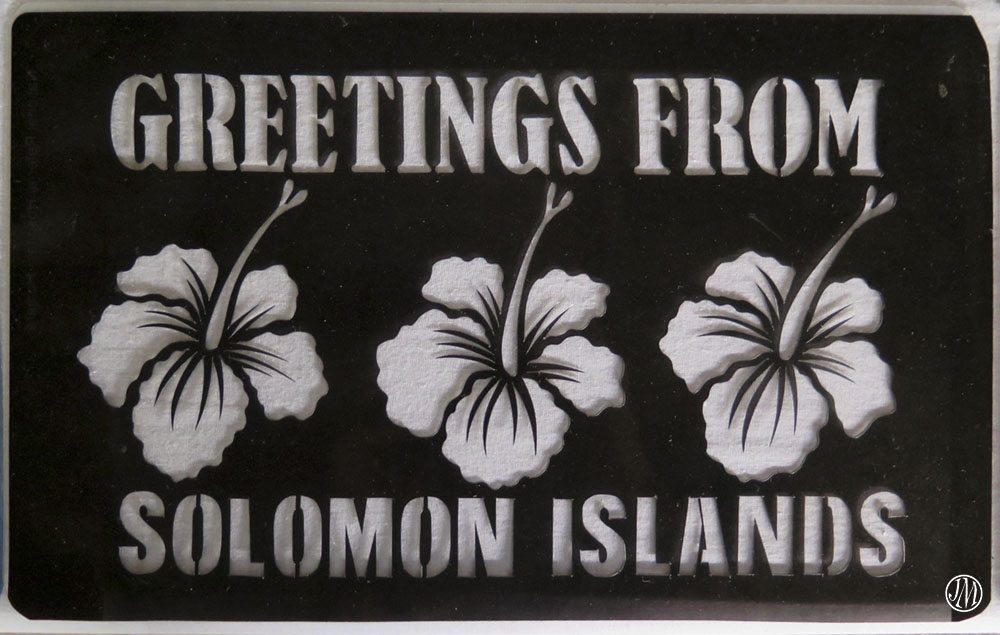 One of his finished artworks. 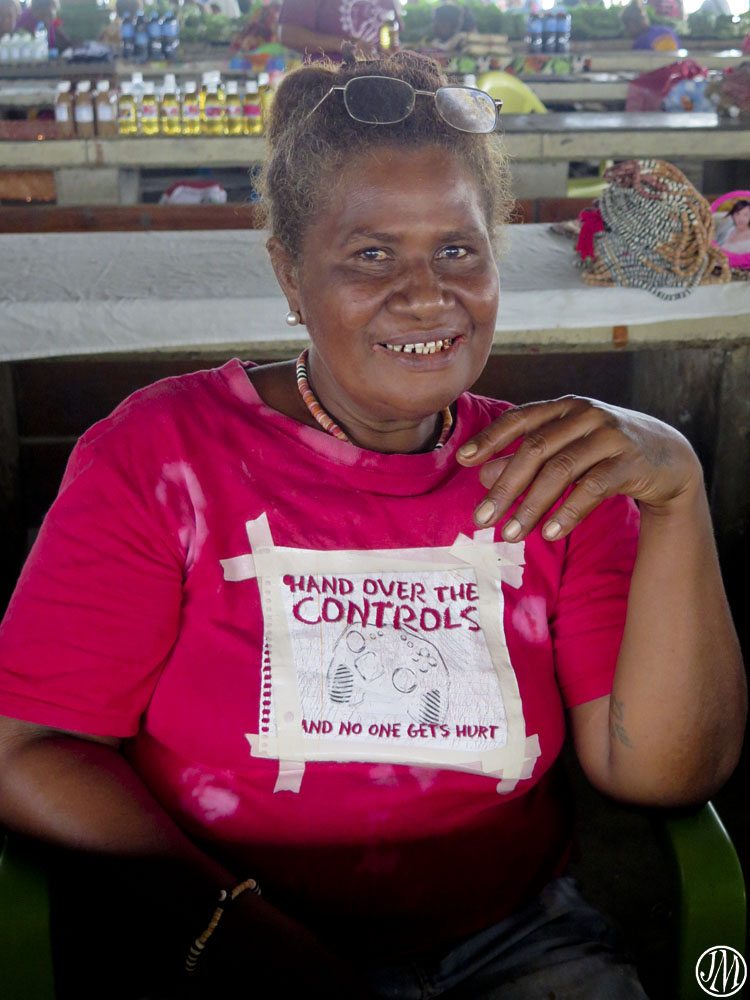 Another kind of artwork on a t-shirt.  Easy enough, tear a page out of a school book and make your own design. 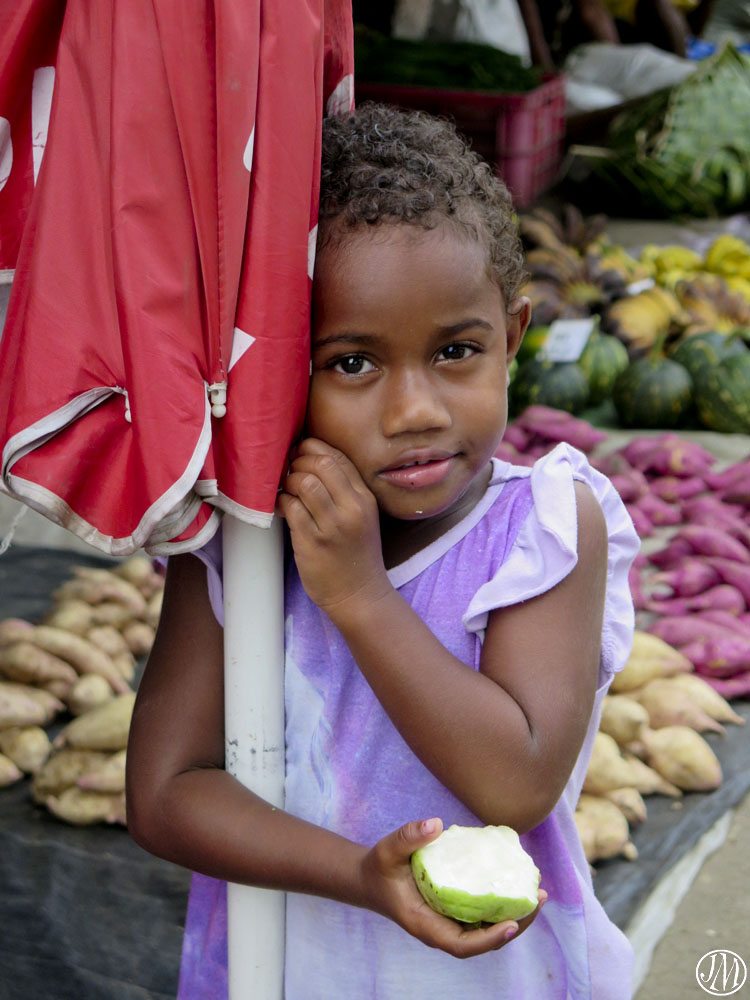 A young girl checks out the foreigner taking photos while she snacks on a guava. 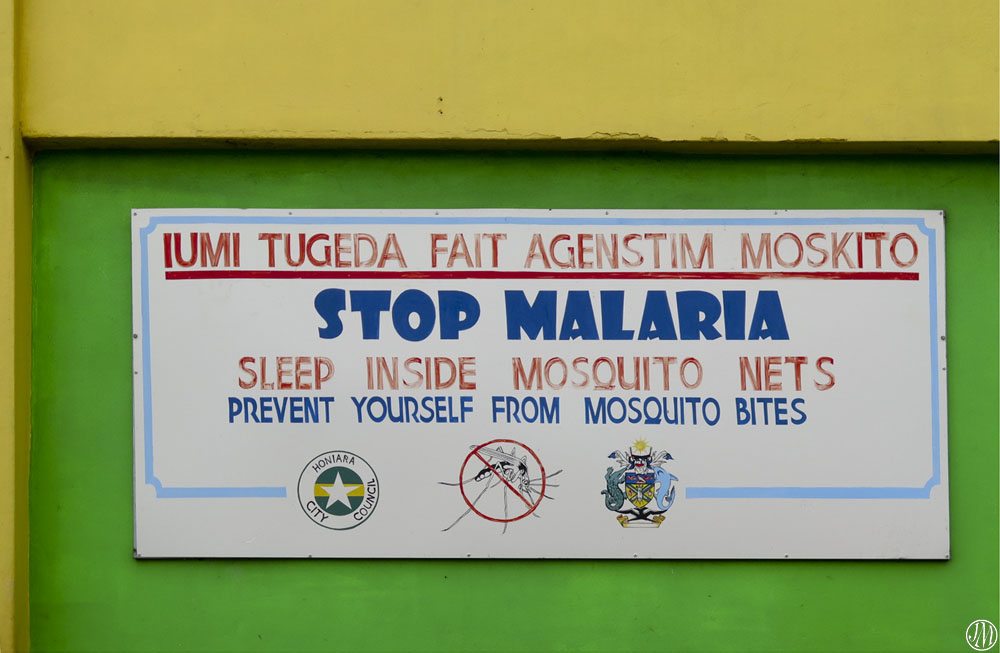 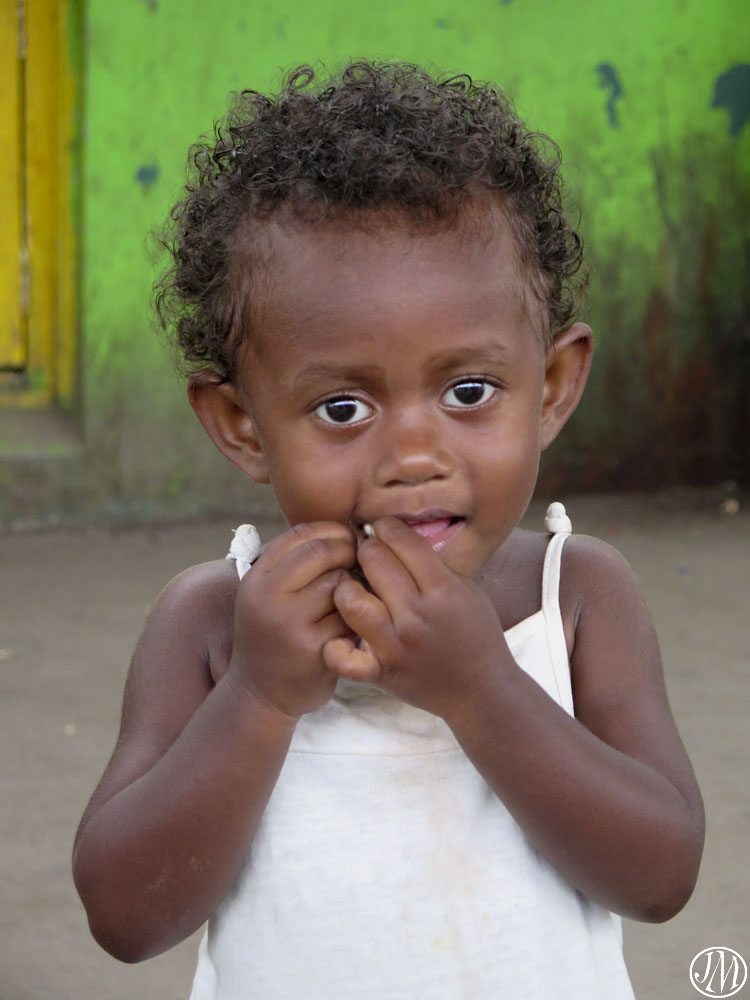 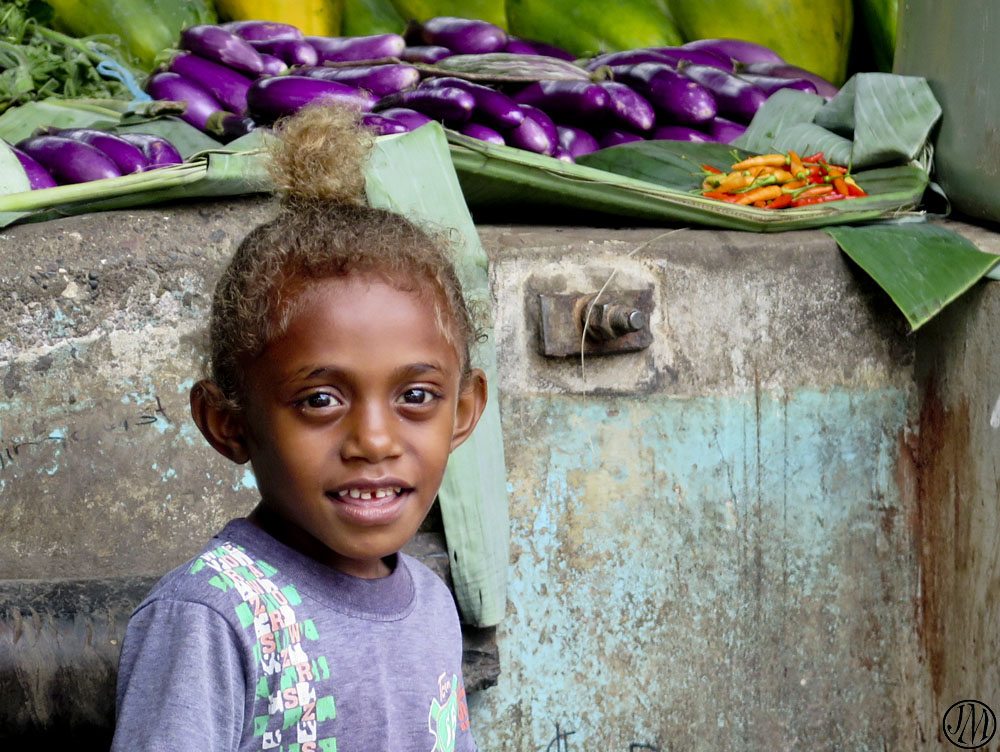 A young boy takes care of his family’s vegetable stall. 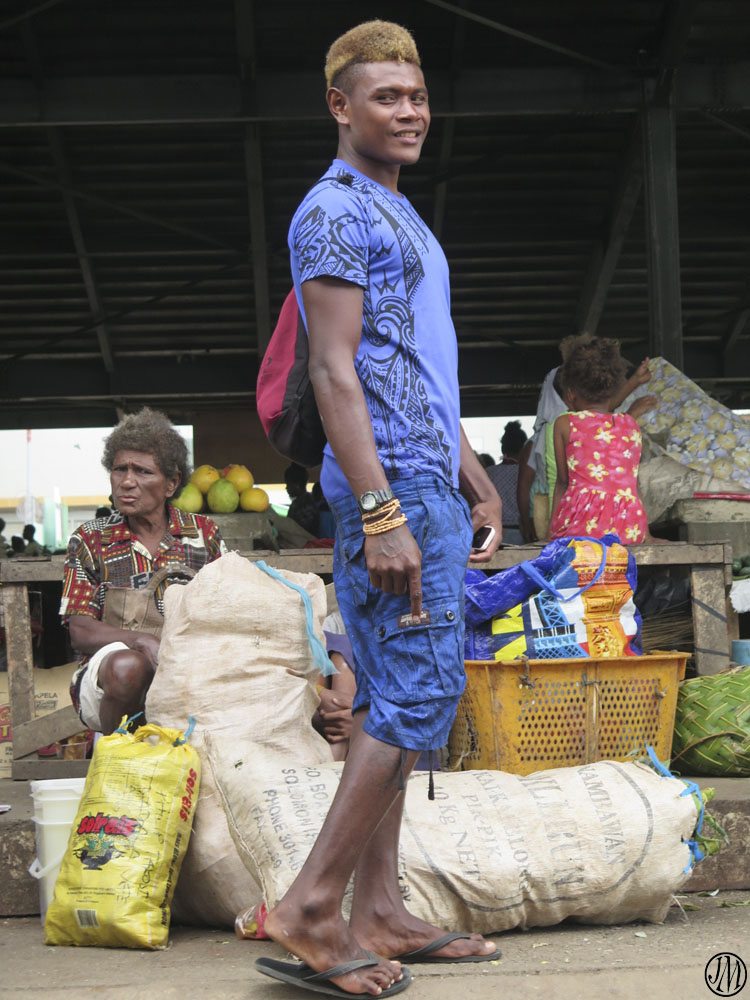 A stylish young man pleased to have his photo taken. 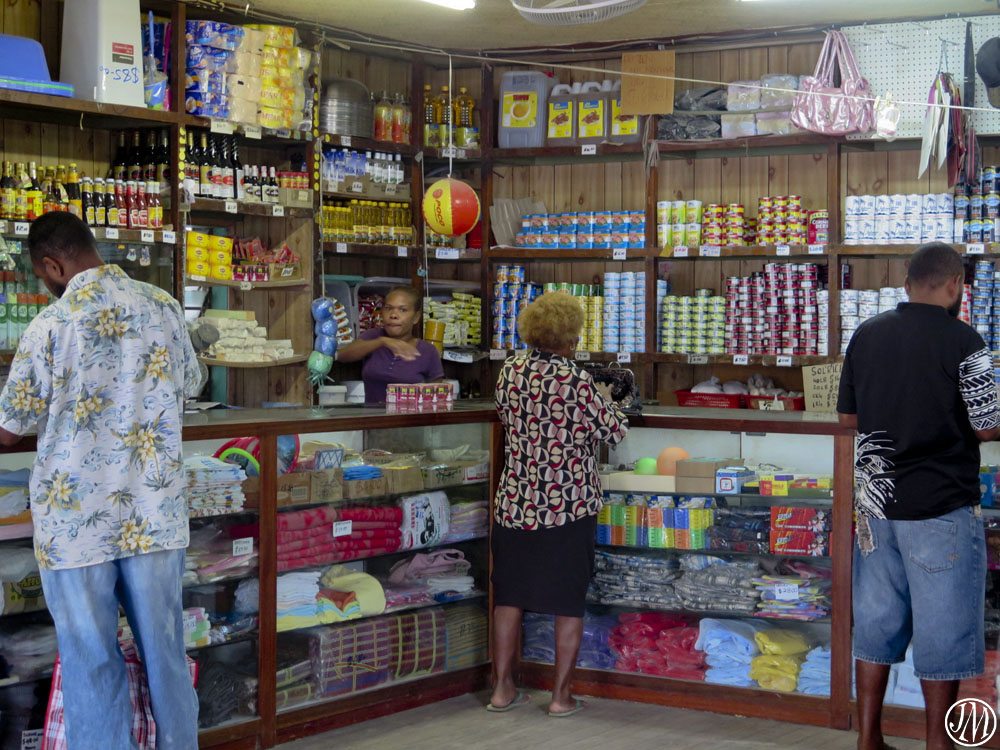 A local shop close by the market selling all and everything – just as I remembered the shops. 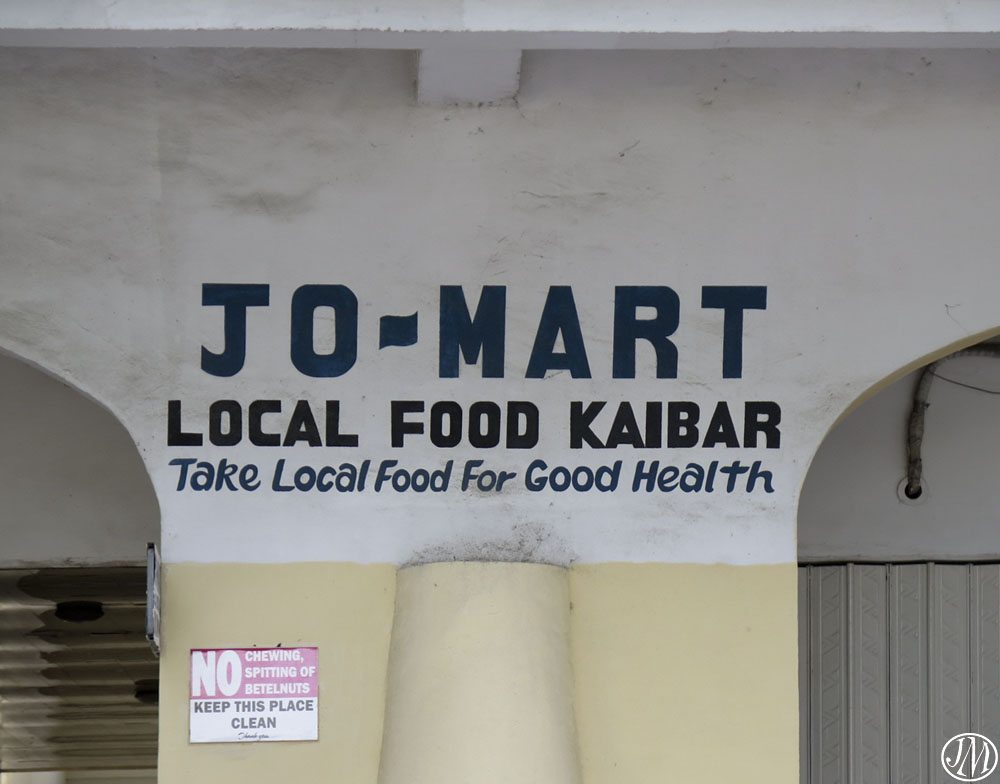 Even a special kaibar (food shop) it seems for me!

In my next blog, I will take you to a weaving festival which I had the opportunity to visit as my little plane out to Santa Isabel was delayed for a day due to mechanical failure.

Until next time, all good wishes,