The Canyon of the Ancients Guest Ranch was a great stepping off point to view some of the other magnificent sights of the SW corner of Colorado, although with the temperatures sitting around 106 F (41 C) we decided to limit our trekking and increase our sitting in the shade with a long cool glass of something in hand. 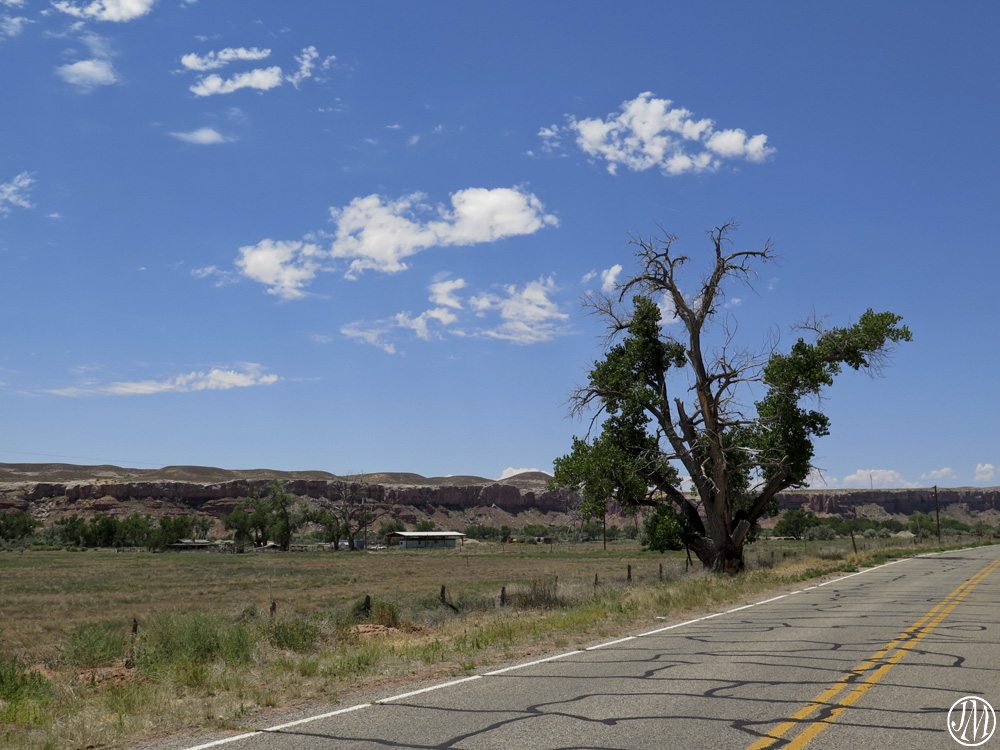 Heading westwards towards Utah, looking for interesting rock formations and petroglyphs along the way. 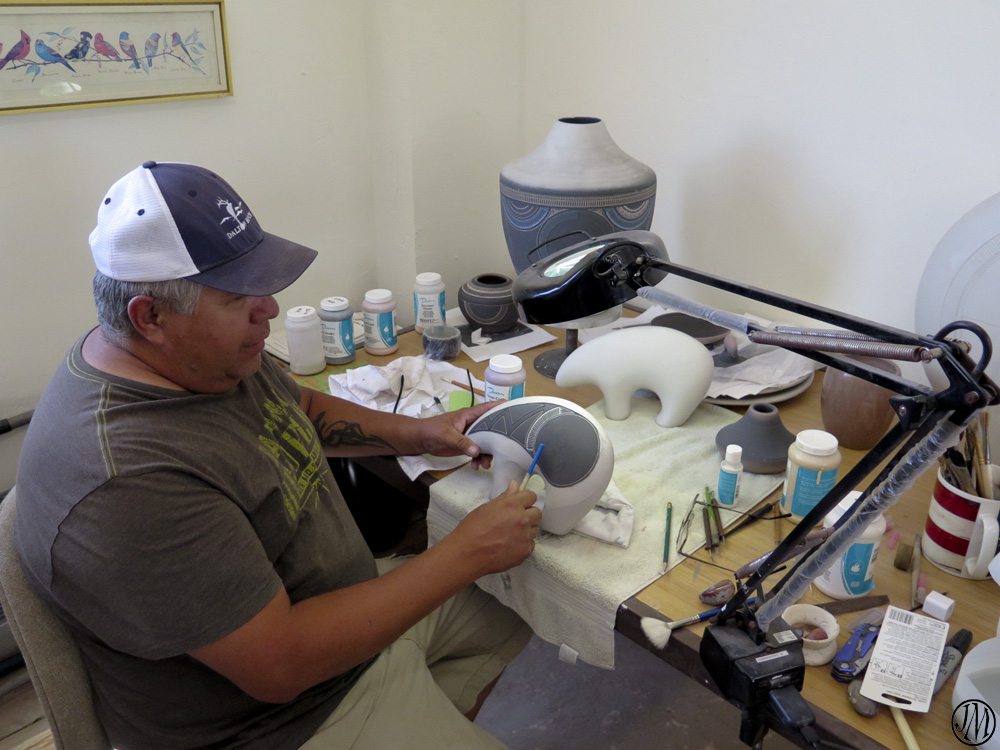 We stopped off to meet renowned Navajo potter Manuel and watched him beginning an etching on a stylised ceramic bear. 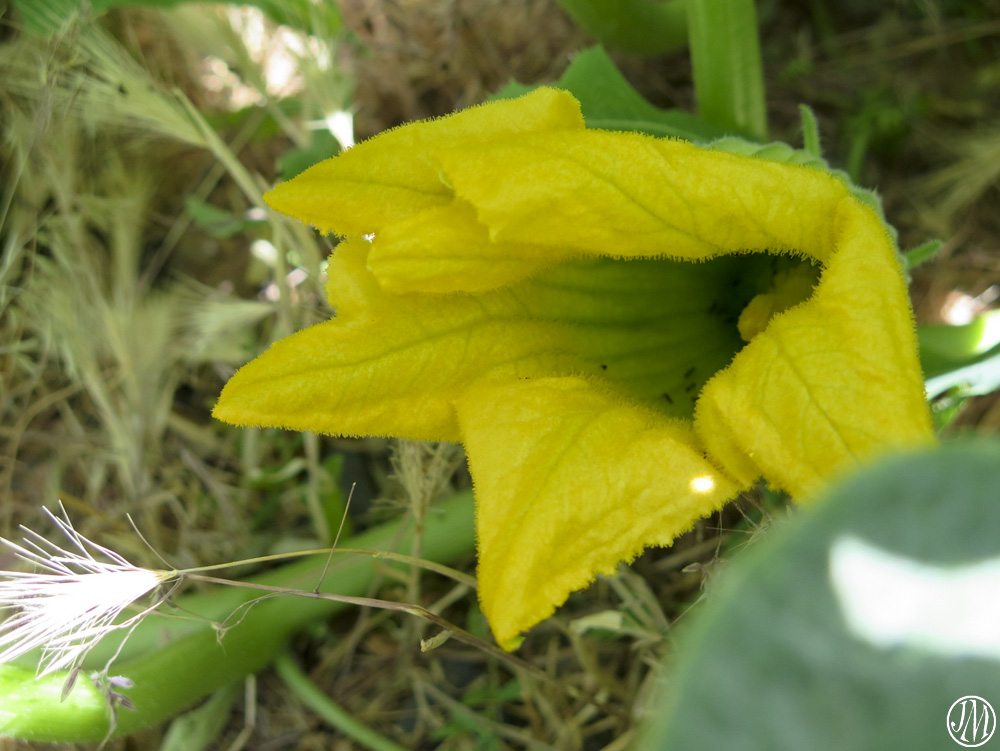 Around Manuel’s house was a wide swath of gourds growing, the yellow flowers standing out among the green. 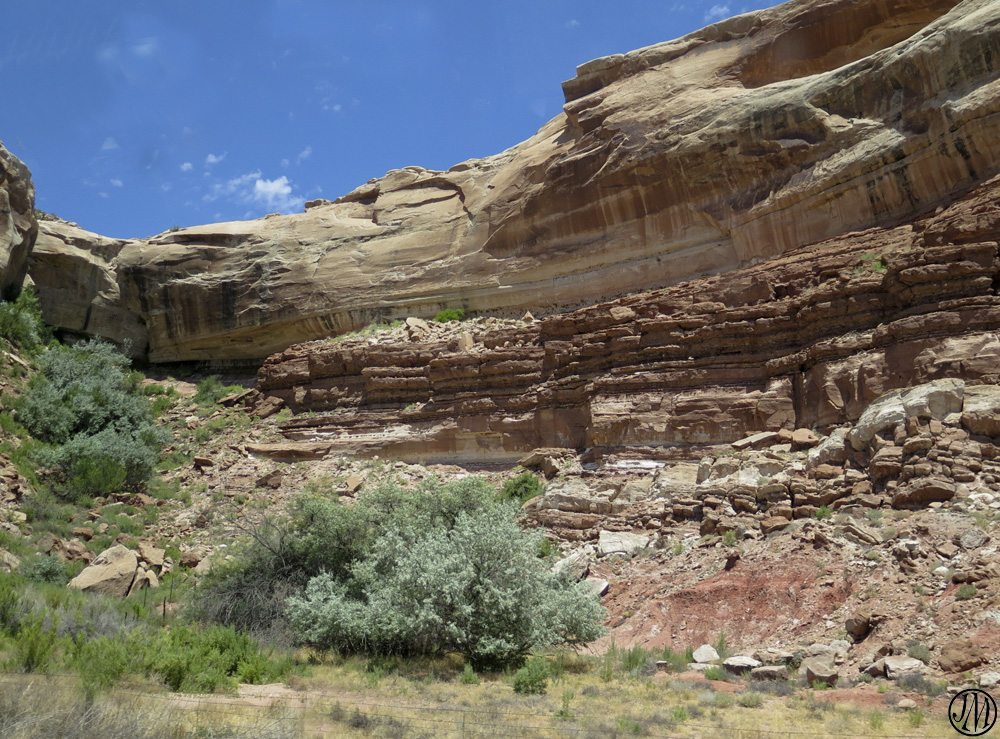 Fabulous striated cliffs along the road with the overhang protecting caves and potential spots for discovering petroglyphs.
Some 2000 sites with cliff art in this region have already been discovered and documented. 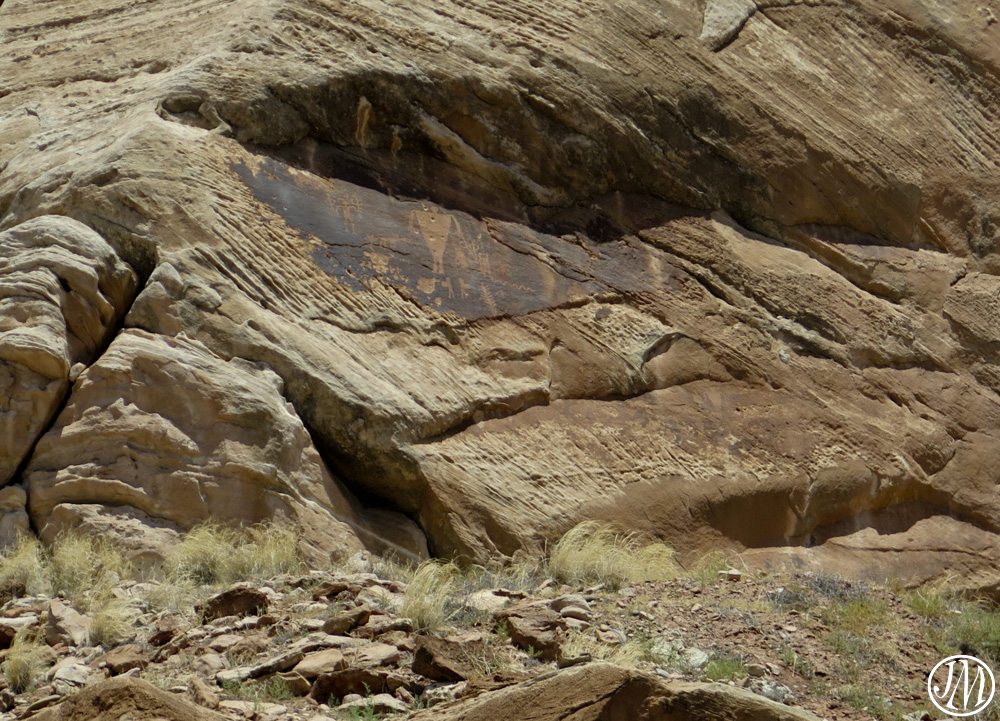 An example of a preserved petroglyph in the crease of a huge rock face, a human figure clearly visible even from the roadside. 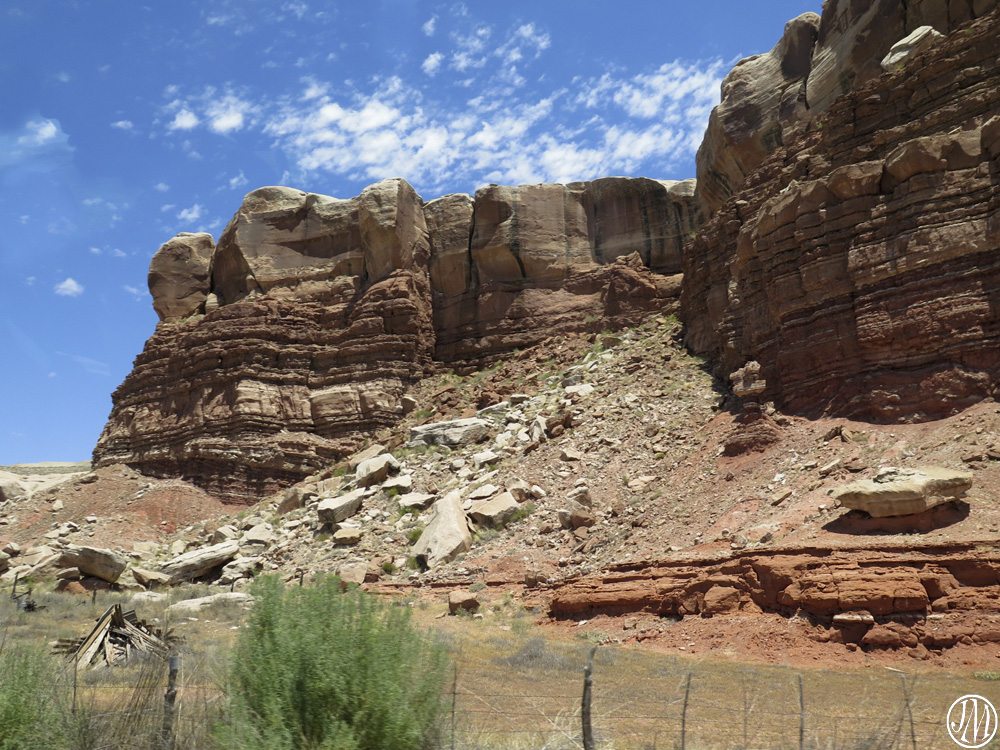 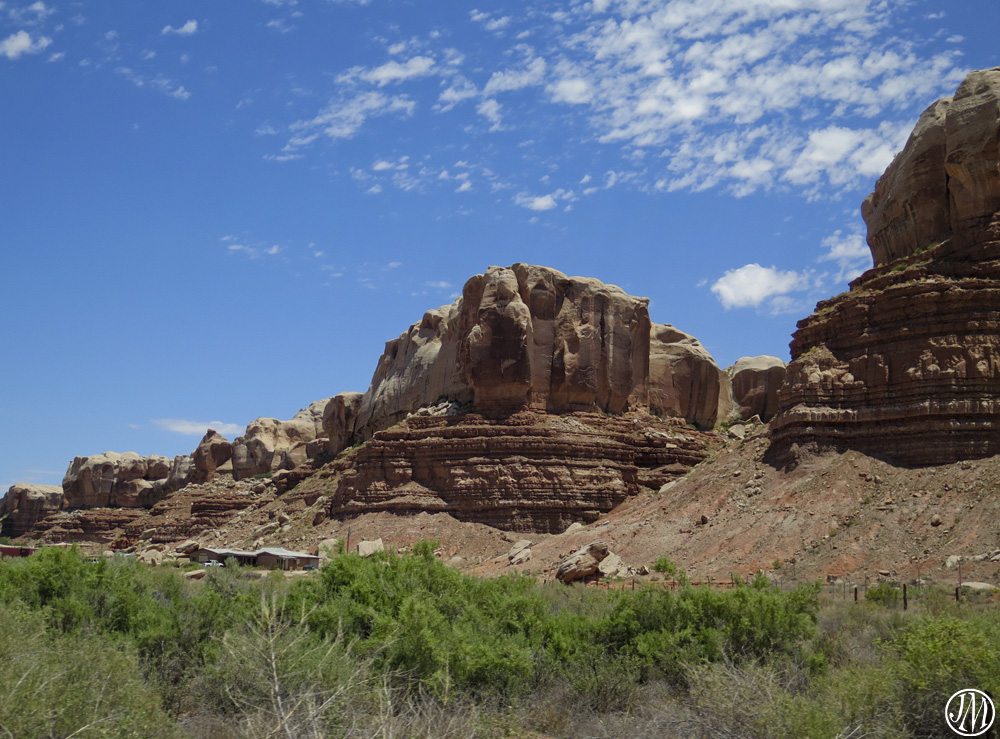 A line of rugged cliffs, erosion carving out channels and valleys between the outcrops. 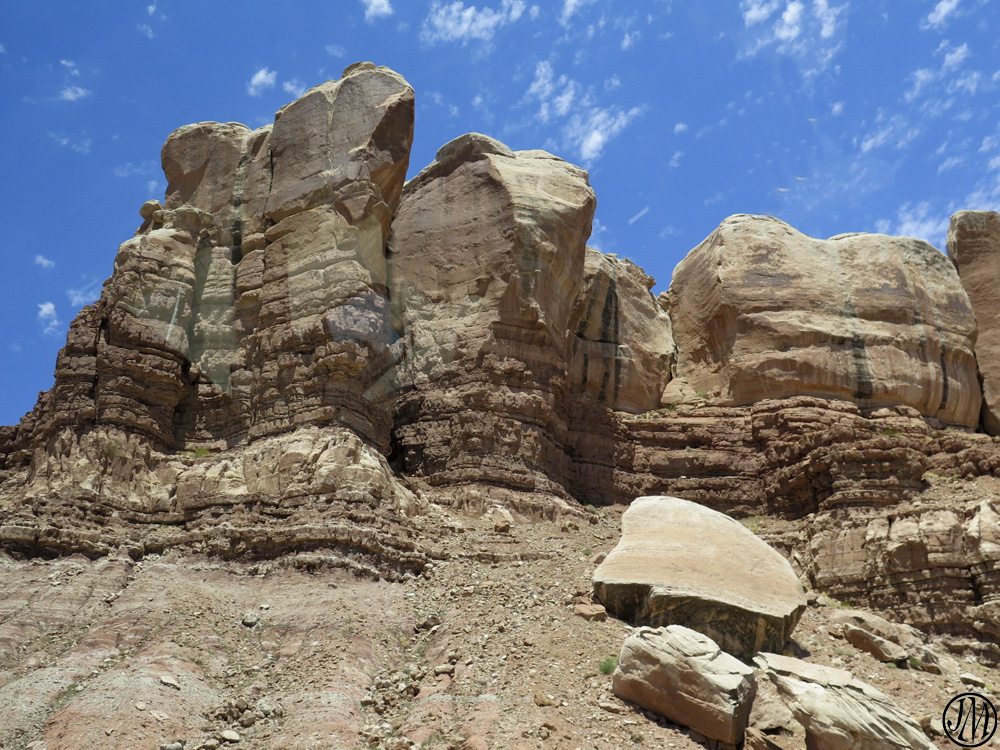 And a really dramatic close-up of one of the mighty, barren cliffs. 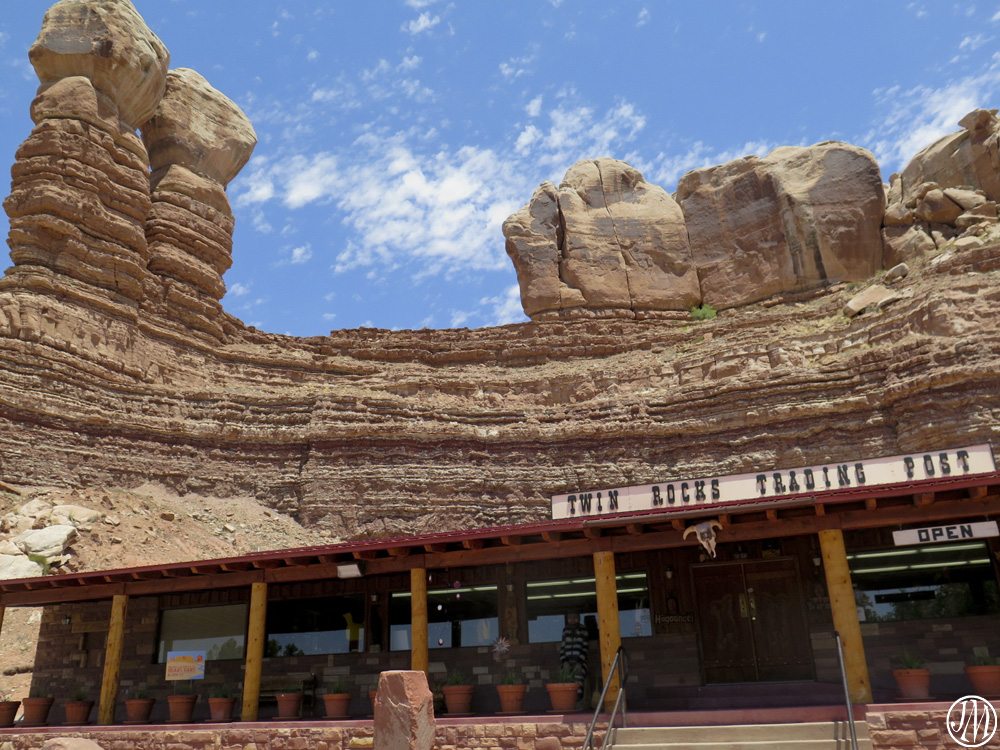 We visited the Twin Rocks Trading Post in Bluff, Utah, which has an extensive collection of local jewellery, baskets,
carvings and paintings, most made by members of the Ute and Navajo Nations. 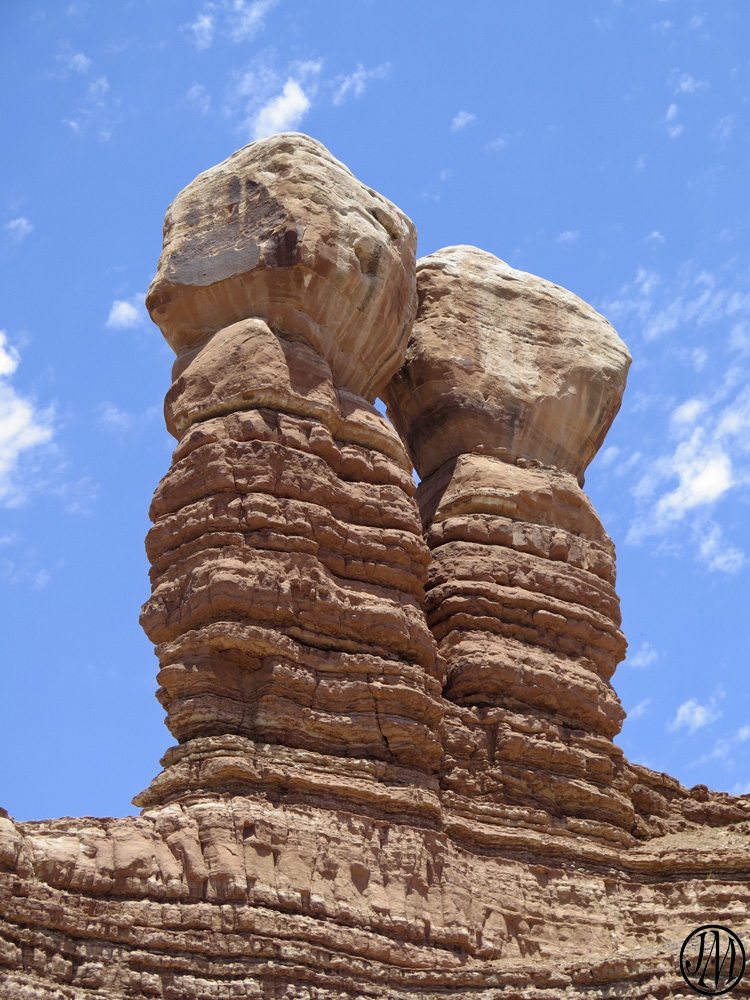 A close up of the magnificent Twin Rocks. I think they look like two figures kissing or am I just being fanciful! 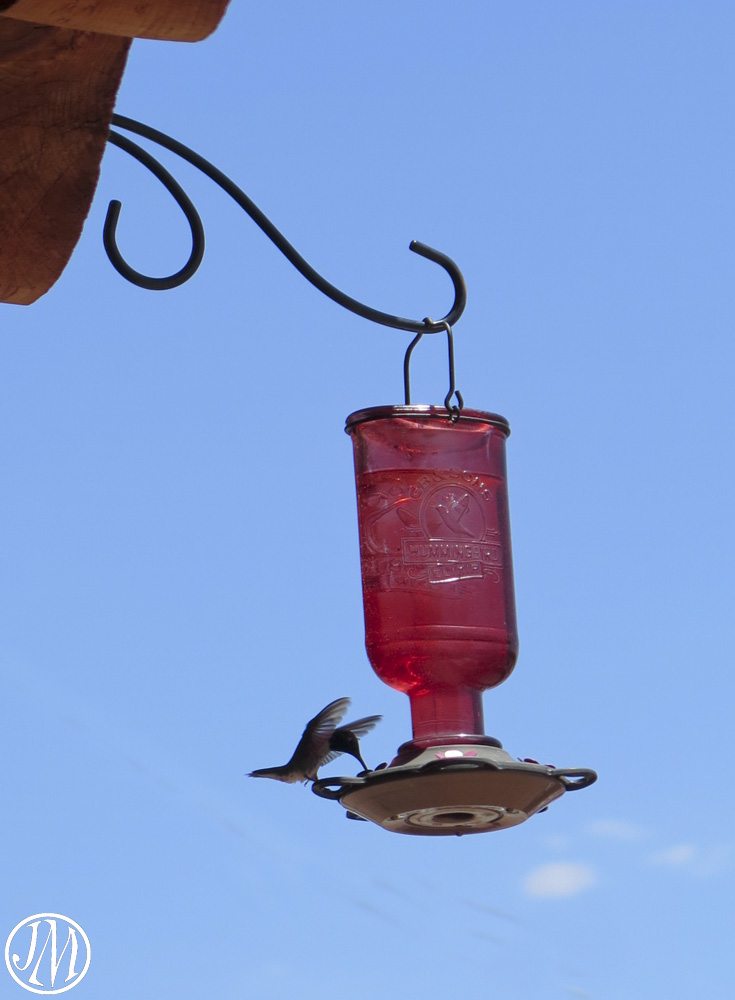 At a little cafe sipping a prickly pear lemonade, we were charmed by the hummingbirds also stopping by for a drink. 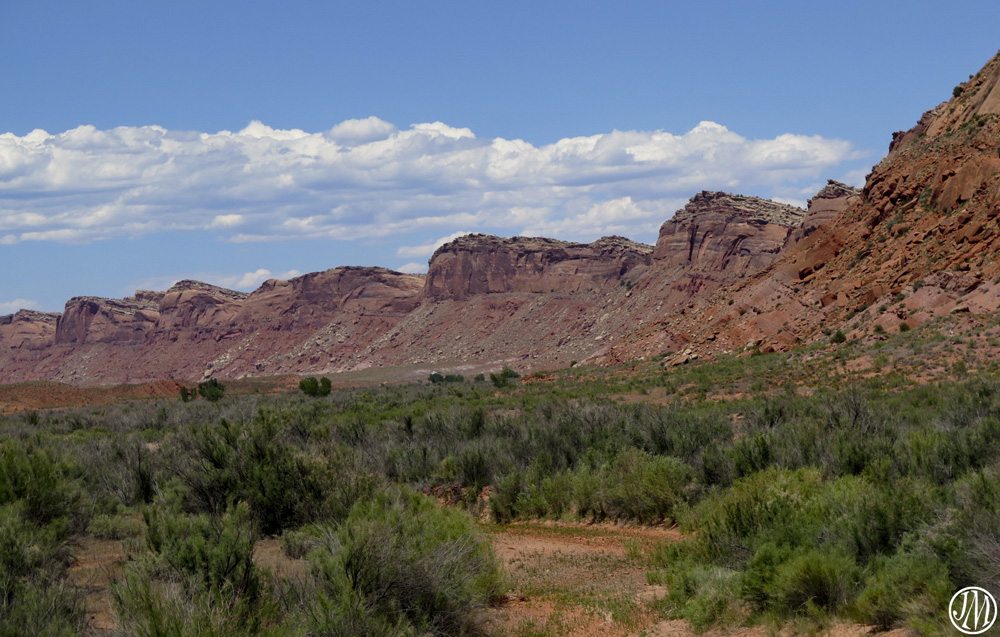 Loving the colours – the green brush merging into the dark red rocks,
silhouetted against the blue sky lined with fluffy white clouds. 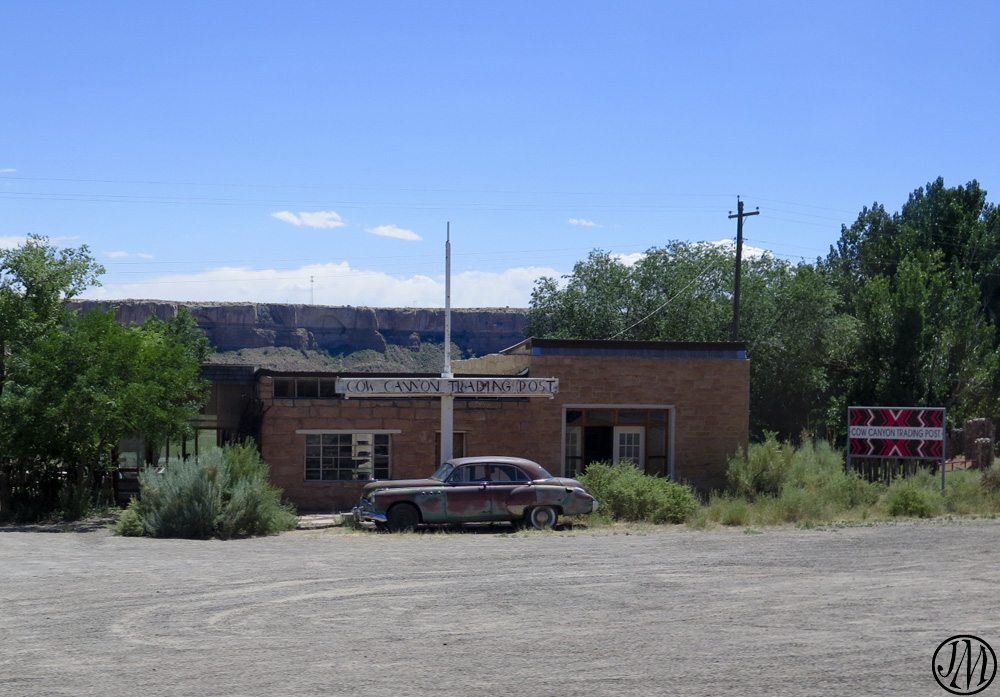 Gow Canyon, Utah, another trading post, this one more than a little abandoned, like something out of a movie set. 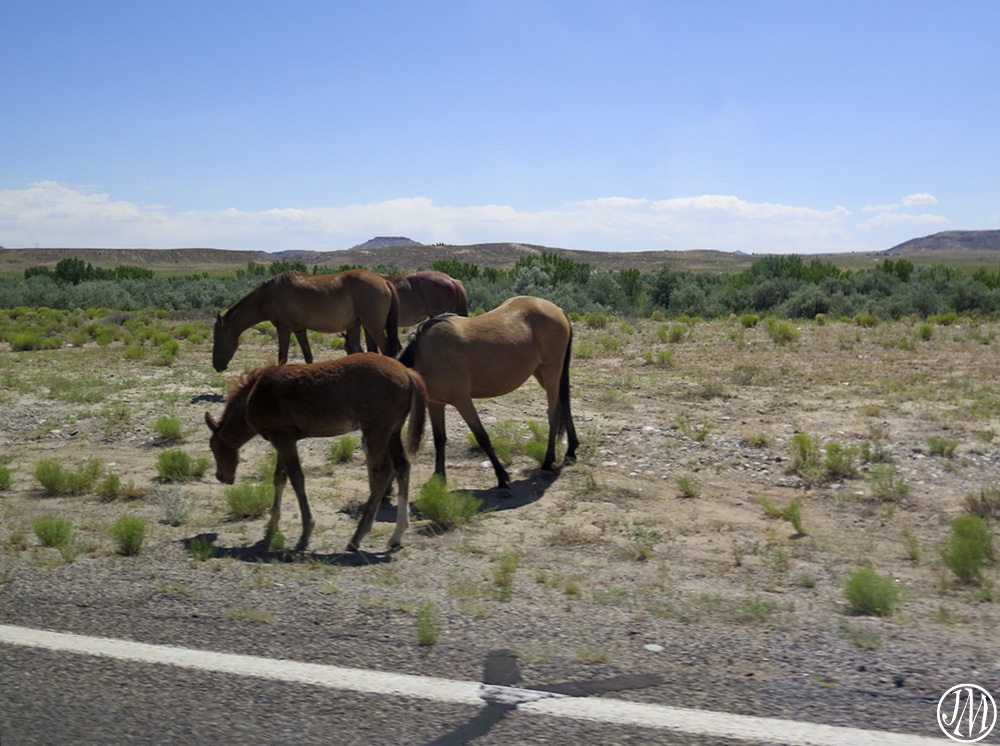 Horses grazing along the roadside.

Back in Colorado, we visited the Mesa Verde National Park which was created in 1907 to preserve the archaeological heritage of the Ancestral Pueblo people, both atop the mesas and in the cliff dwellings below. The park includes over 4,500 archaeological sites of which 600 are cliff houses. The Pueblo people inhabited this area from about Ad 550 building increasingly sophisticated dwellings until about 1300.  It is believed that drought and crop failure may have led to a mass migration of the population moving south towards today’s New Mexico and Arizona. 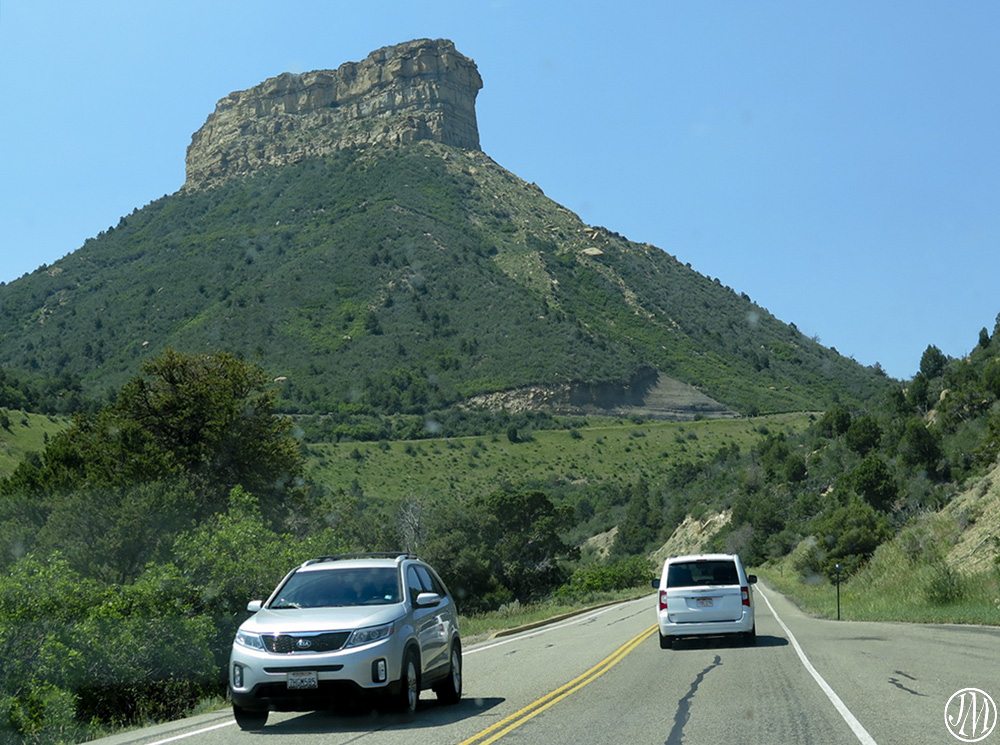 Dwarfed by a towering mesa, we drove into the national park. 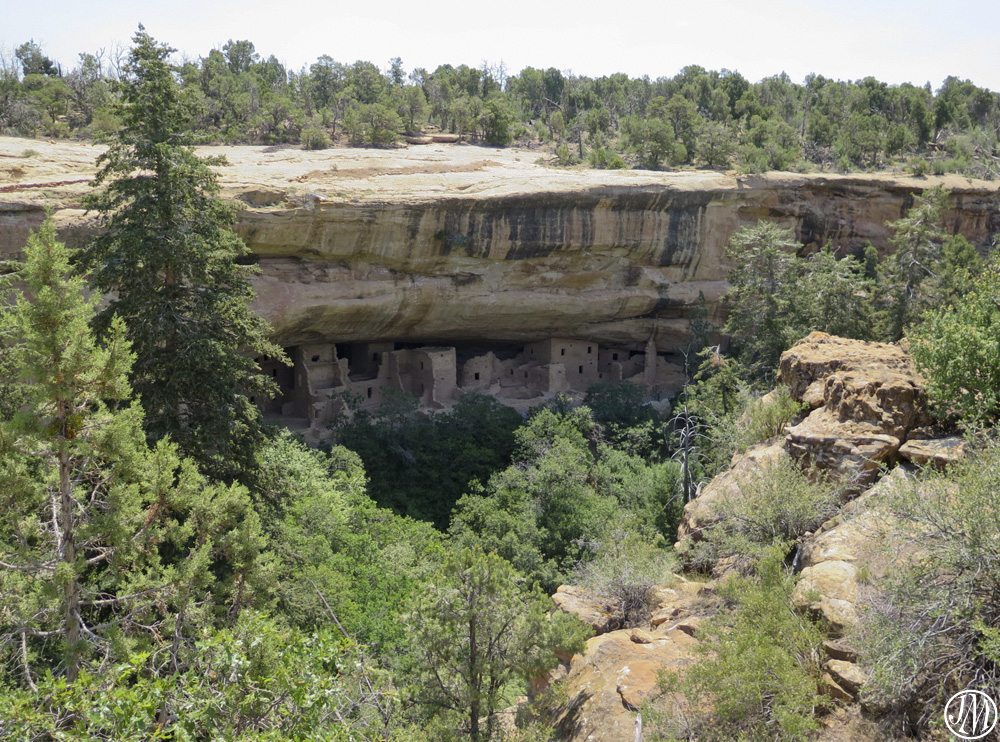 One of the best-preserved sites is the Spruce Tree House,  a series of rooms huddled under the rock overhang. 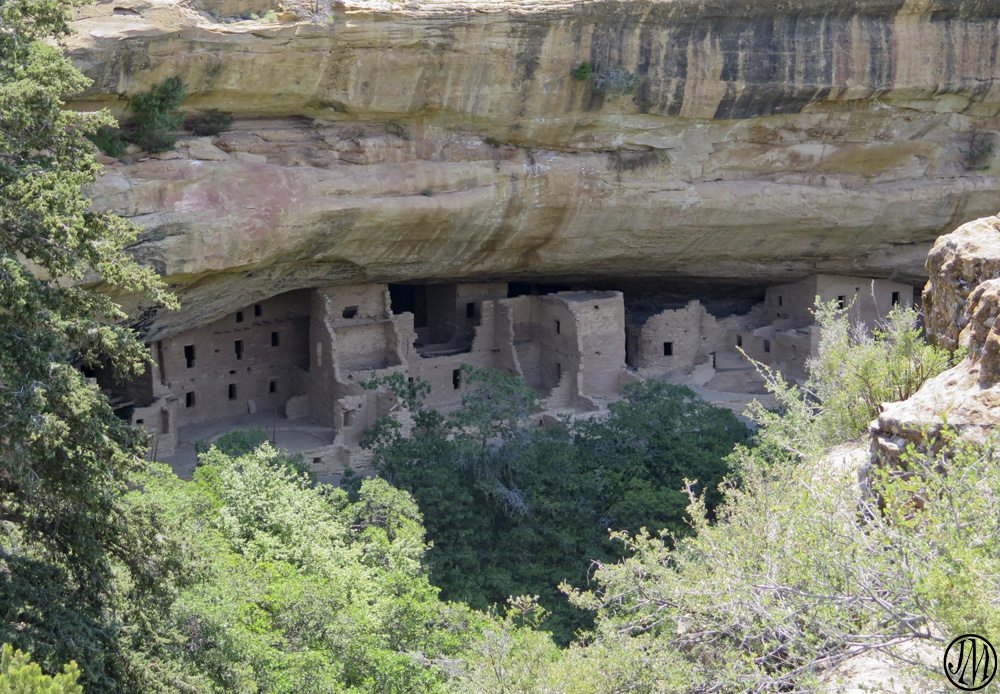 A closer look at the Spruce Tree House, with three storeys evident on the extreme left. 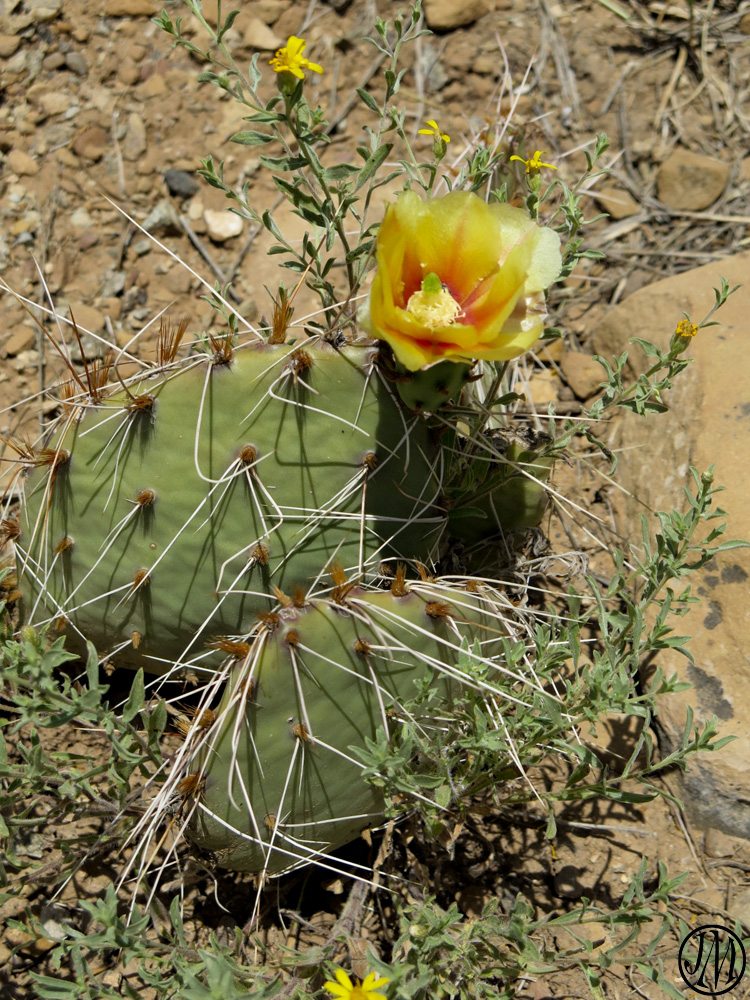 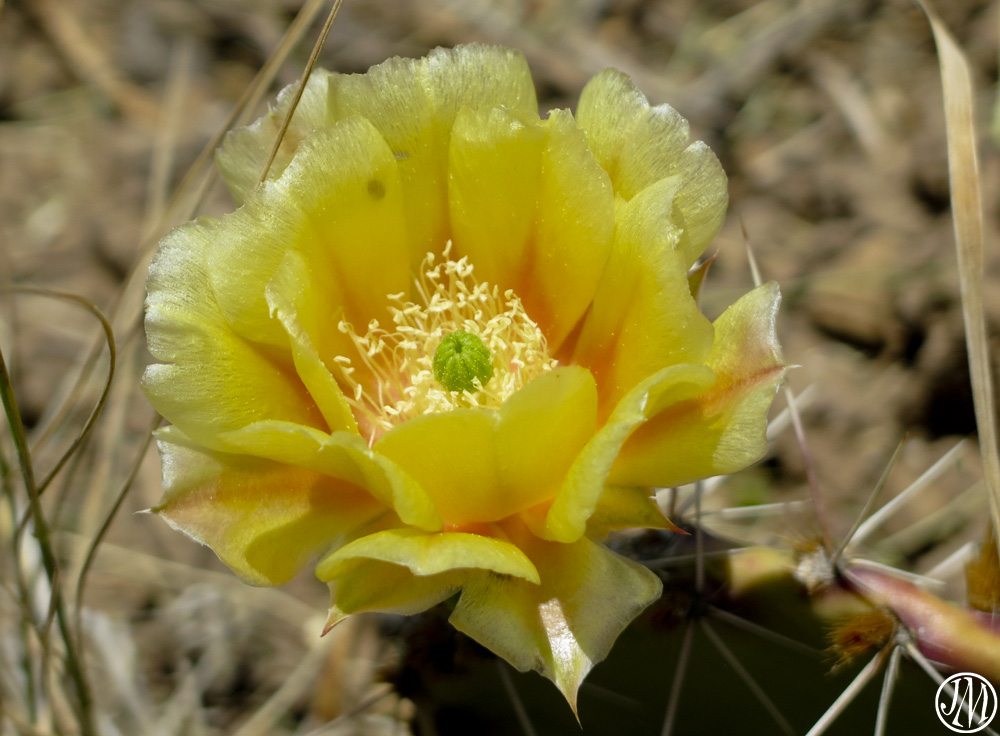 A prickly pear and its flower in the garden surrounding the Chapin Mesa Archaeological Museum.
The Museum houses some excellent diaramas highlighting the different periods and development of the Pueblo people,
a display of artifacts and an excellent movie about the national park and the history of the region. 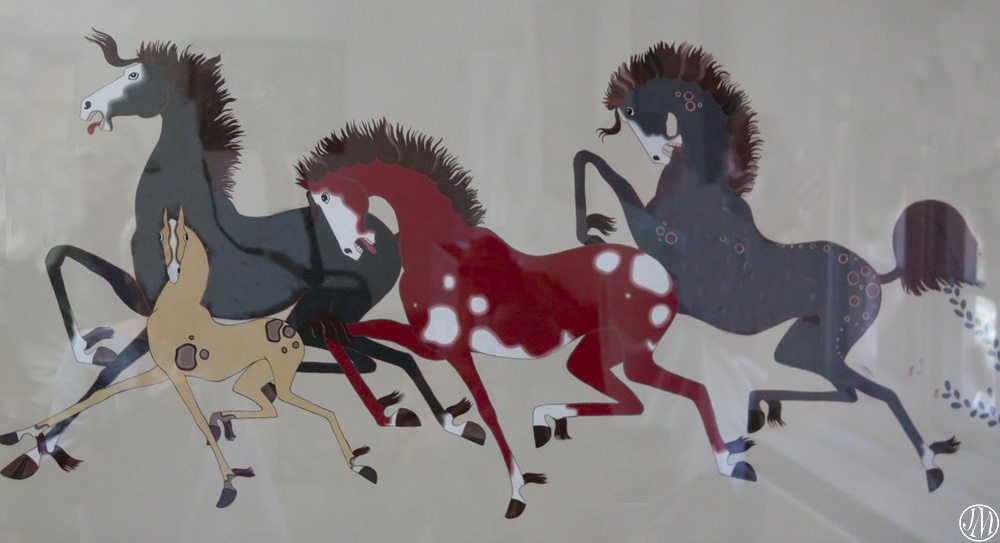 Loved this painting by a local artist in the gift shop, but unfortunately they had run out of copies to buy. I had to make do
with a photo of the original and try to ‘clean’ the reflections from the glass, although they are still rather evident. 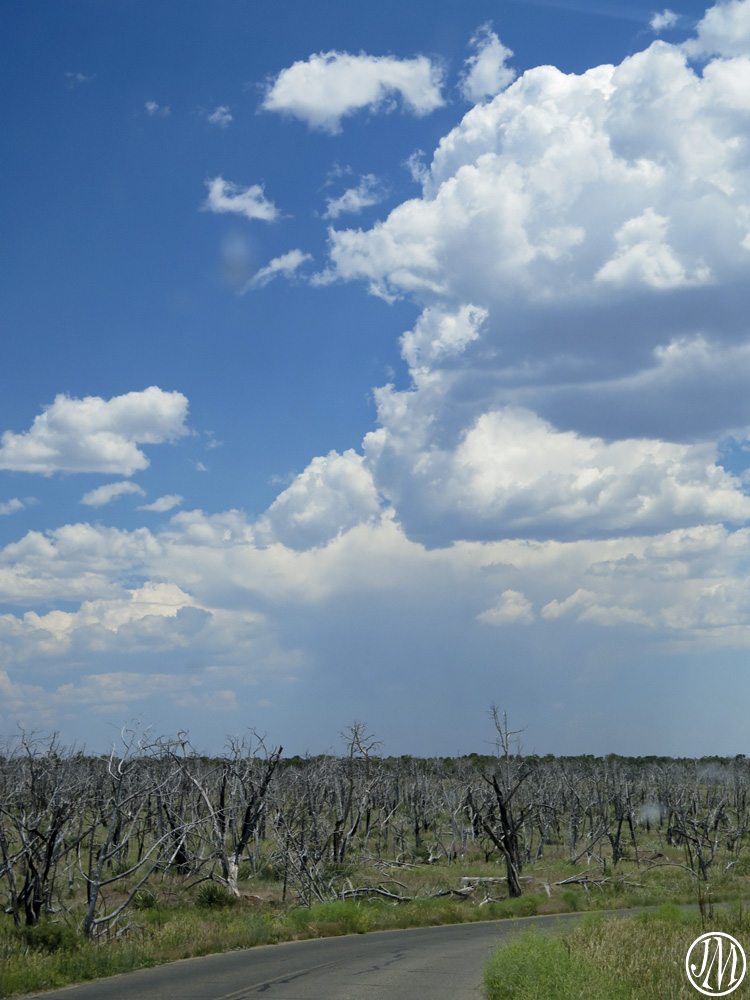 Back on the road towards the Cliff Palace, we were struck by the scorched and burned trees following a
number of devastating forest fires which have swept through the park. 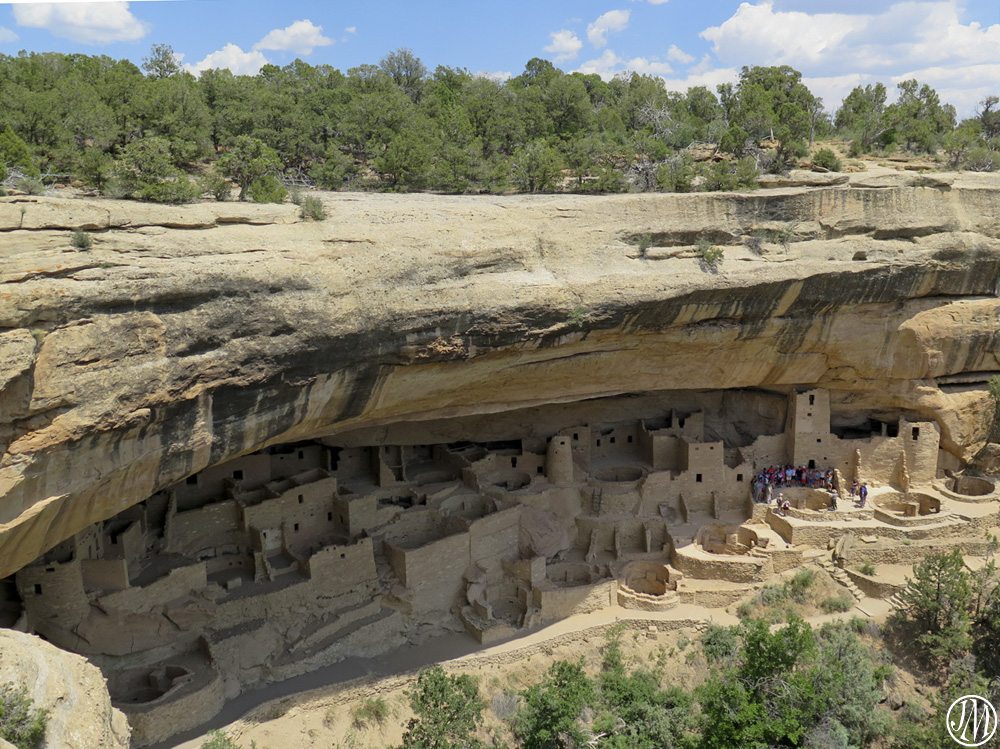 A view of the magnificent Cliff Palace, the most extensive of the Mesa Verde Dwellings.
The tour group on a visit surrounding one of the kivas (a round underground chamber usually
accessed via a ladder in the roof) gives a good indication of the size and scale of the Cliff Palace. 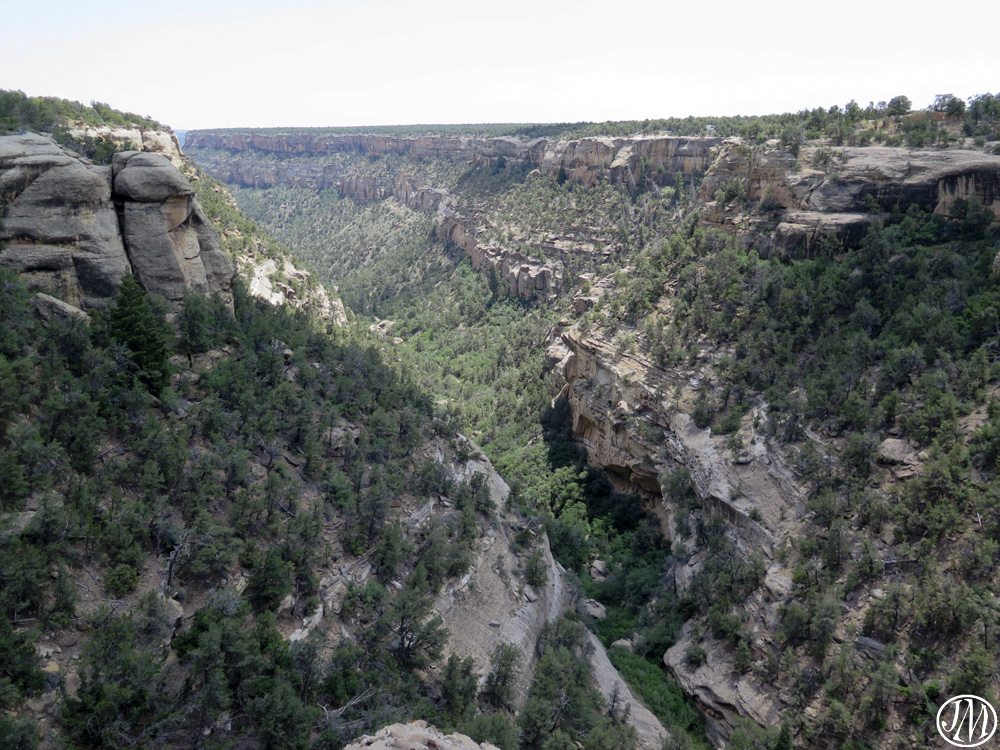 Looking down a magnificent canyon between two parallel mesas. 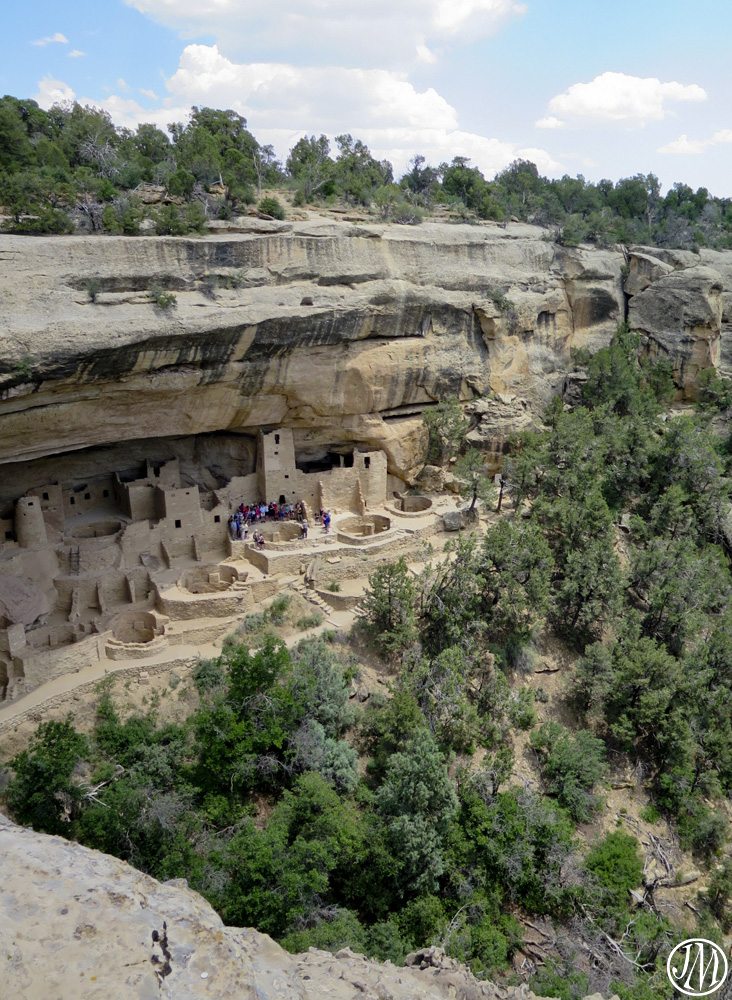 Another view of the Cliff Palace showing how well the terrain protects and defends the dwellings. 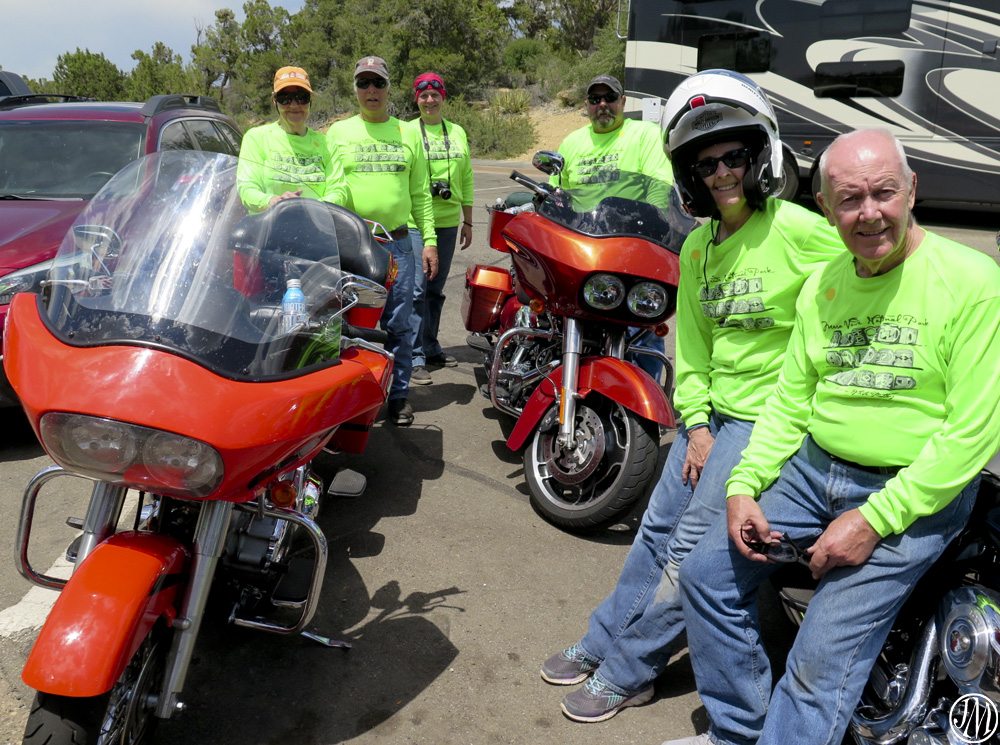 Back at the parking place, we found a group of tourists next to our car and I was taken by their visibility and bright bikes. 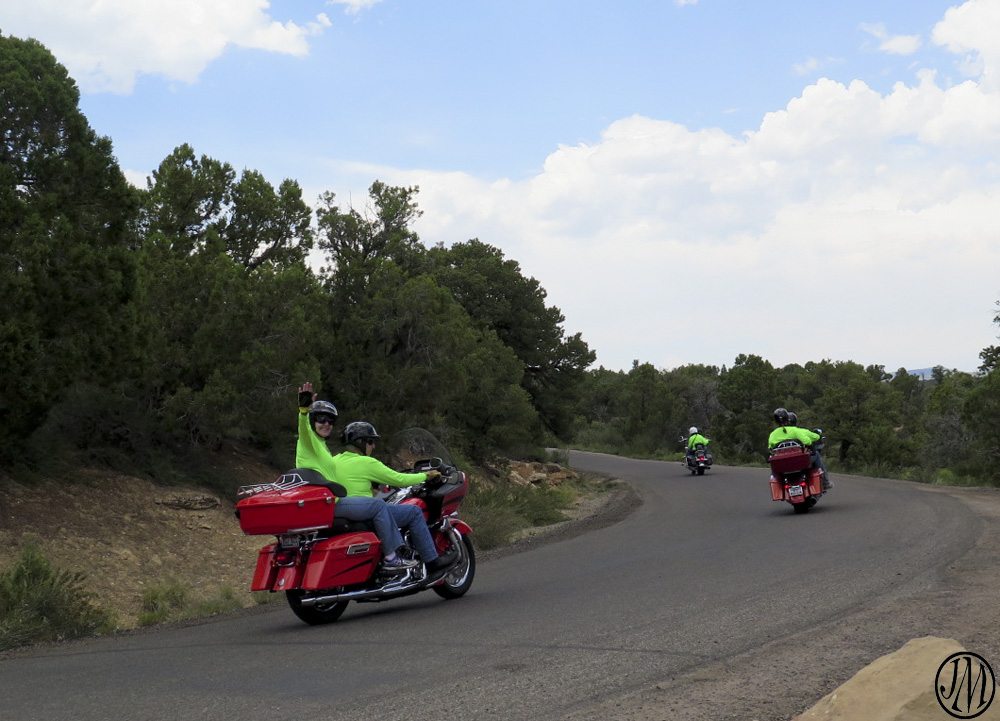 And as we prepared to leave the park and continue our road trip, they were already on their way, waving good-bye to us.

My next blog will conclude the great SW Colorado road trip as we travel in a north-easterly direction to Denver via the delightfully-named towns of Durango, Pagosa Springs, Monte Vista, Saguache, Salida and Fairplay.

Greetings to you my readers and please send me your comments if you feel so inclined.