Madagascar #1 – On the road to the north

Madagascar #1 – On the road to the north

I have spent the last two weeks in Madagascar, the world’s fourth-largest island and home to some truly unique flora and fauna. After flying into the capital city, Antananarivo which became the pivot, we flew to the north, then the south and finally drove to the east. In the north, starting out from Diego Suarez, we visited two national parks – Ankarana with its dry forest and eroded limestone towers, and Amber Mountain’s rain forest. In the south, we began from Port Dauphin and stayed a few days in Berenty Private Reserve with tamarind and spiny forests, and in the east, we drove towards Tamatave and spent a further two days in the rainforest of Andasibe National Park and visited the famous Lemur Island. 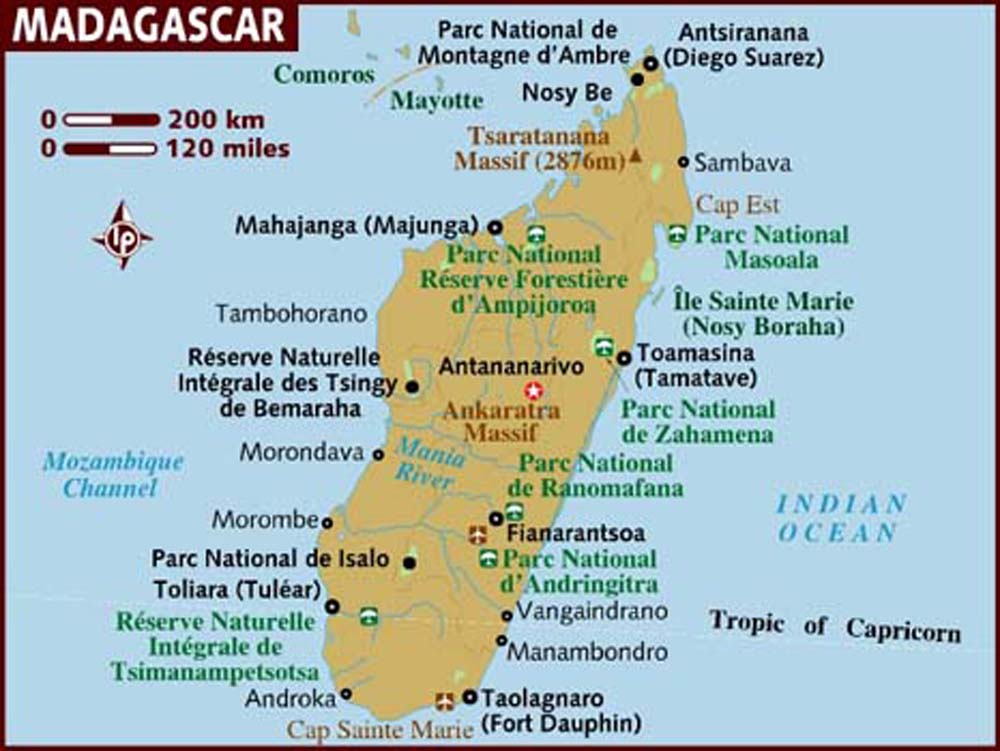 To get to the National Parks, we had to do a lot of road travel, and I use that word ‘road’ loosely, as, in the main, the condition of the roads was pretty bad, and made worse recently by two big cyclones passing through.  We were informed that the road from Port Dauphin in the south to Berenty Private Reserve had been built by the French in 1958 and nothing has been done to it since. Uhoh. It was indeed interesting and a challenge, but perhaps added to the adventure of exploring Madagascar.

This trip was organised by Wilderness Travel and we were just a small group of four, led by a great guide Vy who smoothed the way and provided plenty of information throughout the trip. In addition, in each National Park, we were accompanied by one or two local guides who did everything they could to ensure we saw as much as possible and even went as far as showing us the best spots from which to take photos. I marvel at their capacity to spot the most camouflaged wildlife, like the leaf-tailed gecko and the smallest frogs and insects.

For this first blog, it seems fitting that I give a flavour of the beautiful countryside, green and vibrant after the rainy season, the villages and the people we passed along the way on our drive from Diego Suarez to Ankarana National Park. 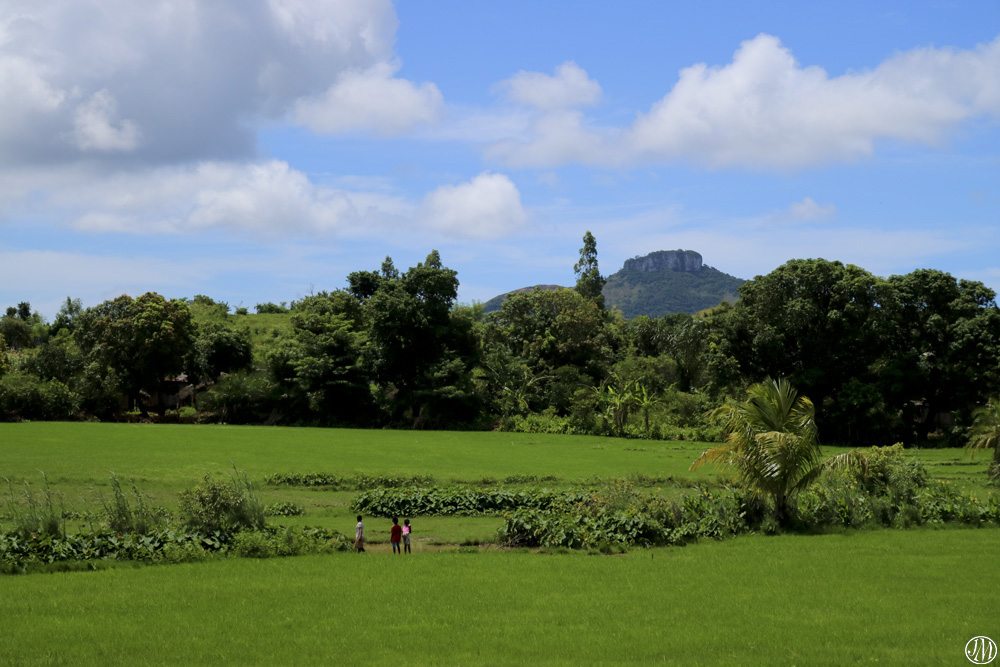 Rice paddies, blue skies and mountains in the distance. 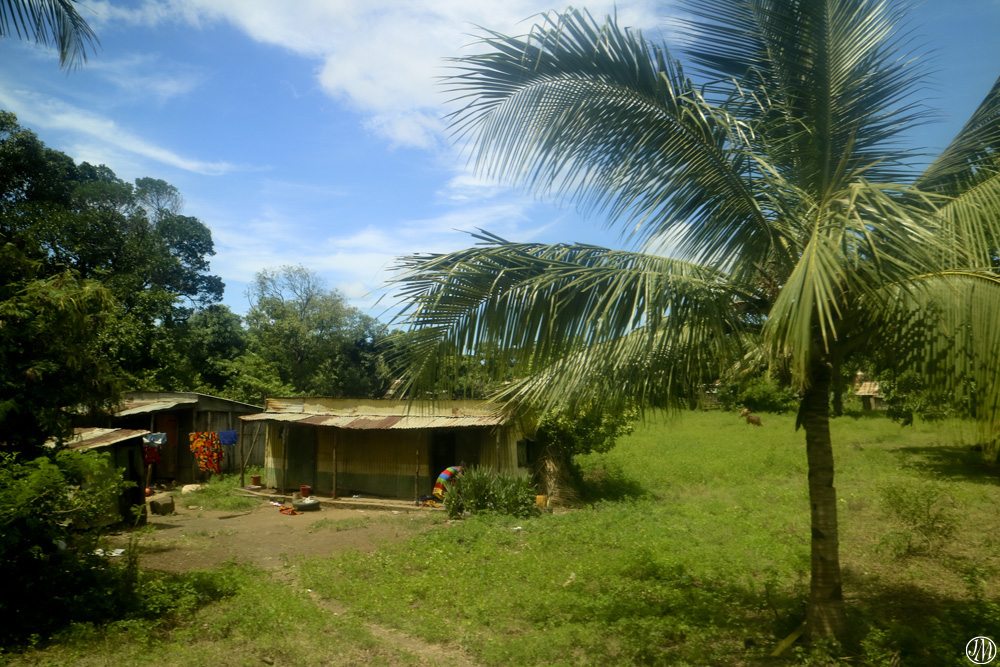 A small farmhouse close to the road, the mother busy with her chores. 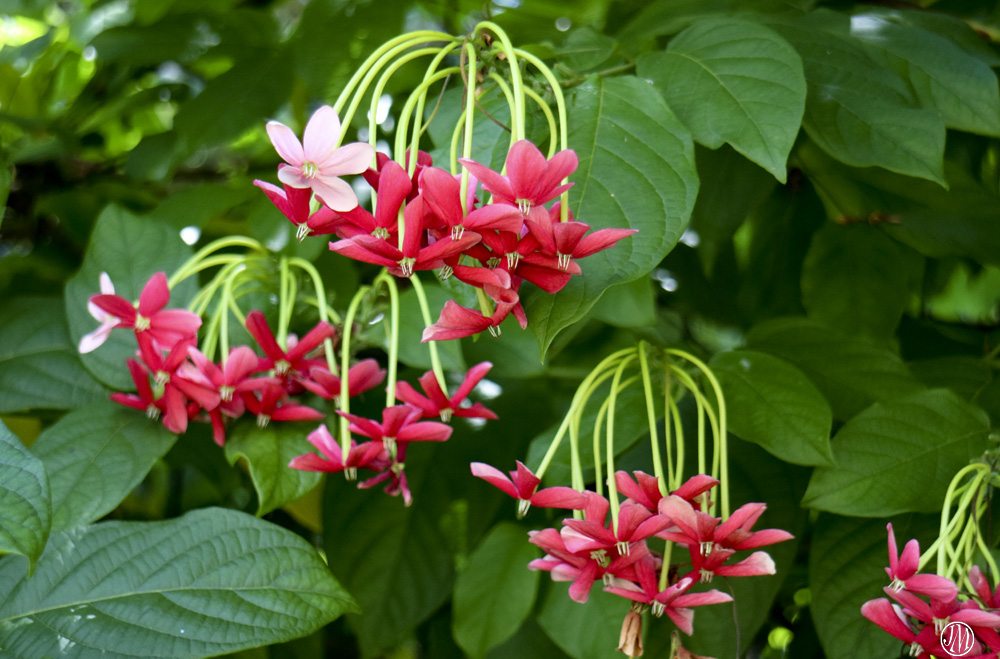 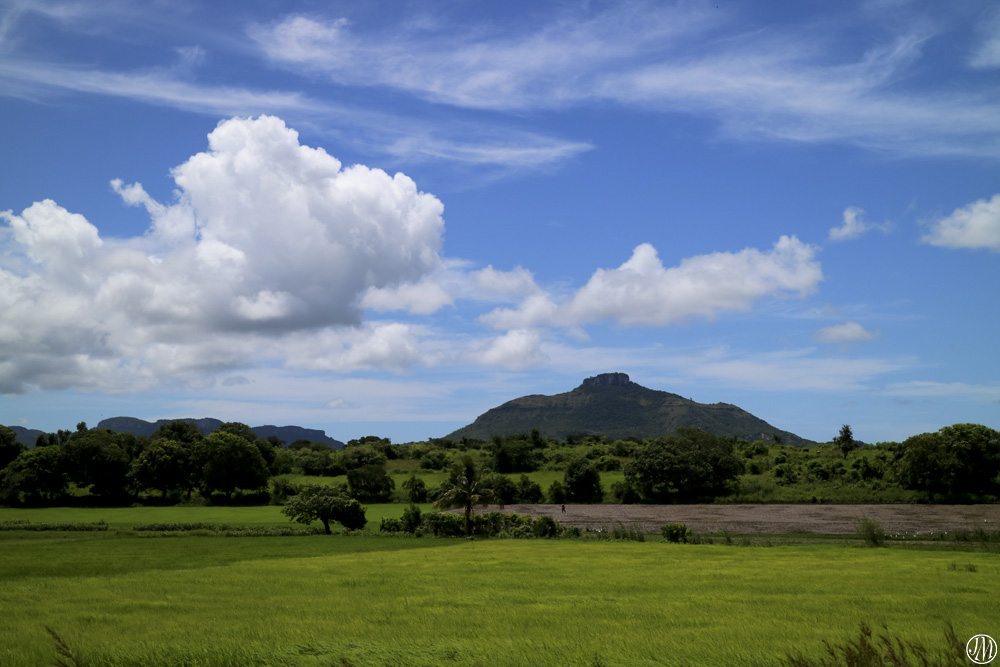 Another longshot view of the landscape in the north of the country. 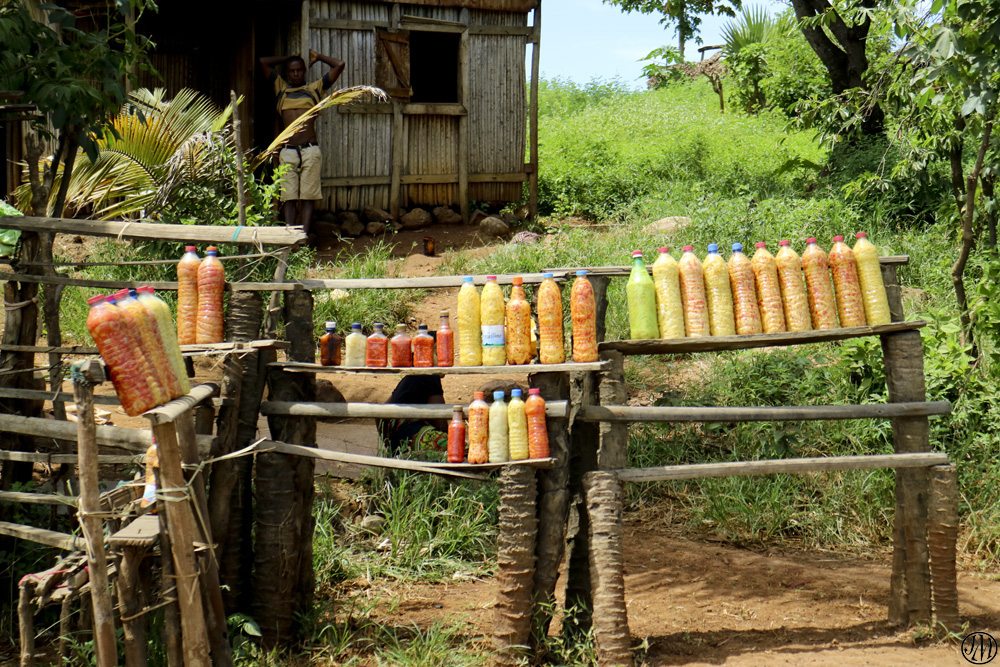 Mango syrup, lime juice and chilli for sale outside many of the houses. 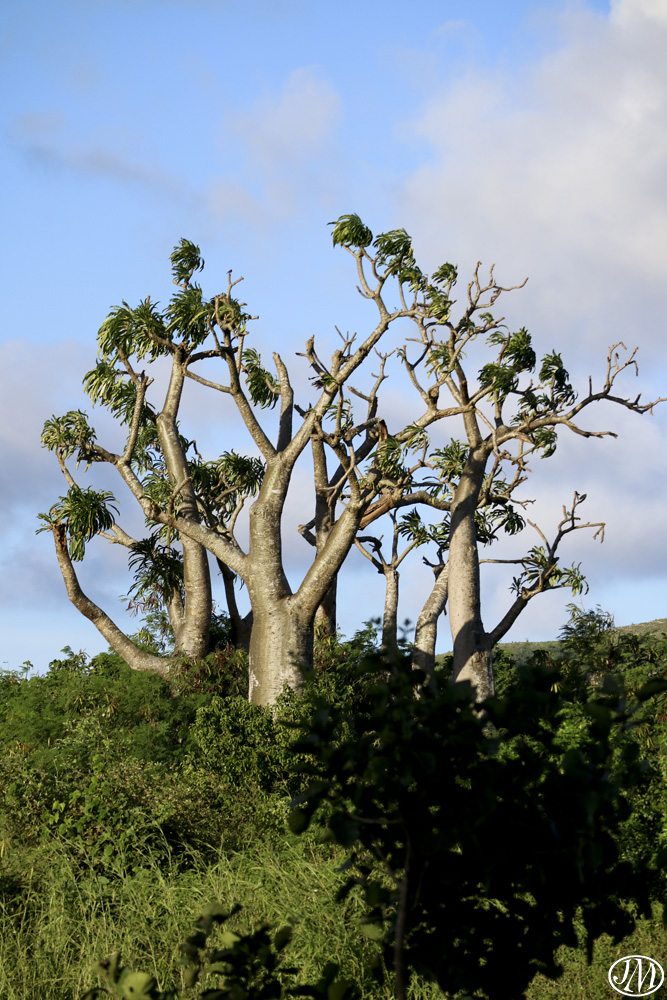 There they are, a stand of baobab trees for which Madagascar is famous. 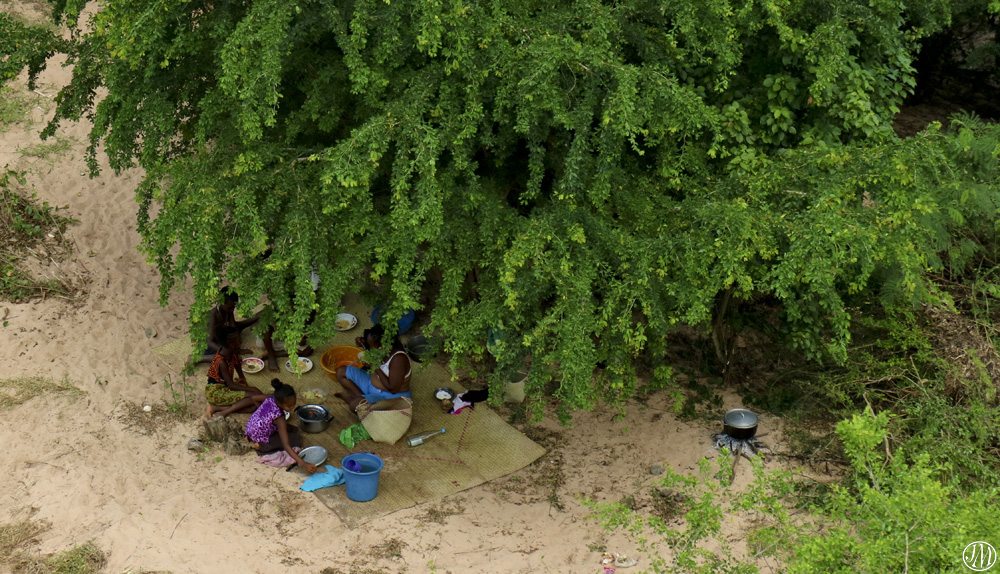 It was a public holiday the day we drove and small groups were picnicking and enjoying a nice day out. 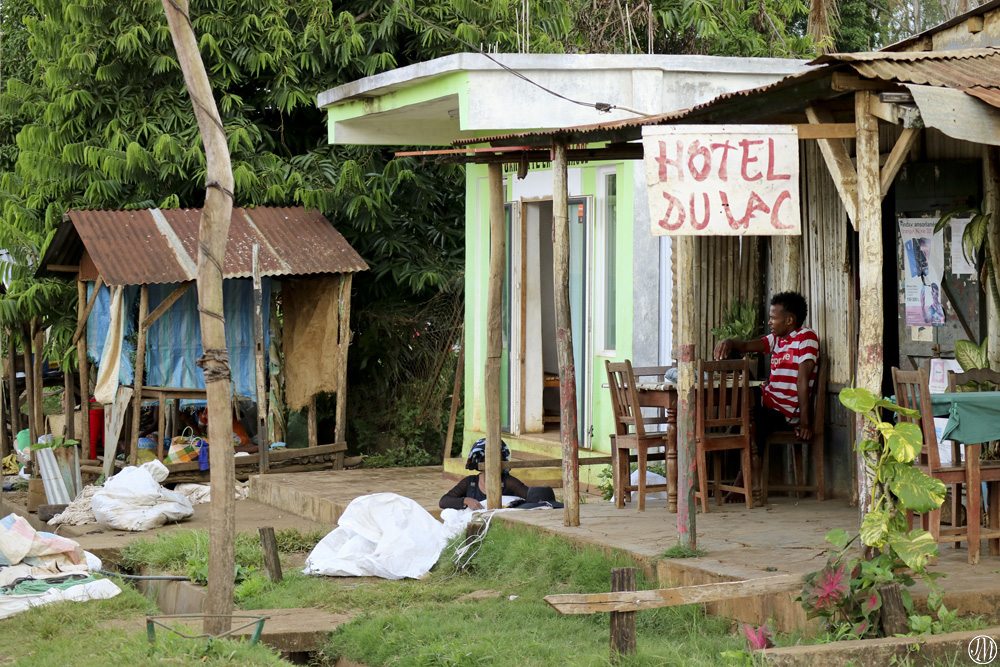 We stopped to stretch our legs in a small town where there was a busy little market. There wasn’t a lake to be seen but … 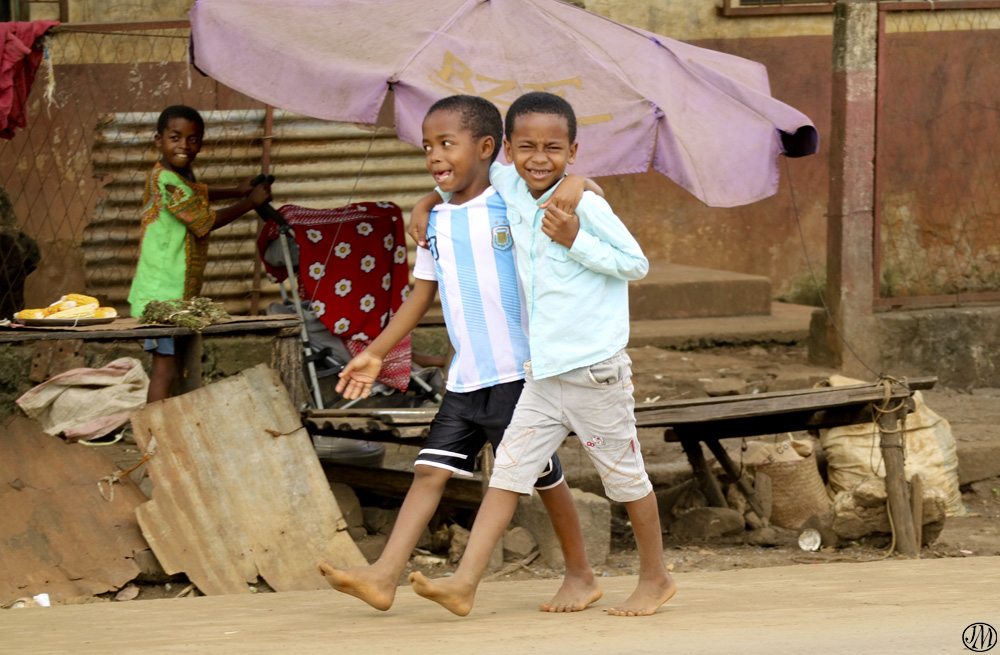 A couple of young boys looked to be enjoying their walk in the town. 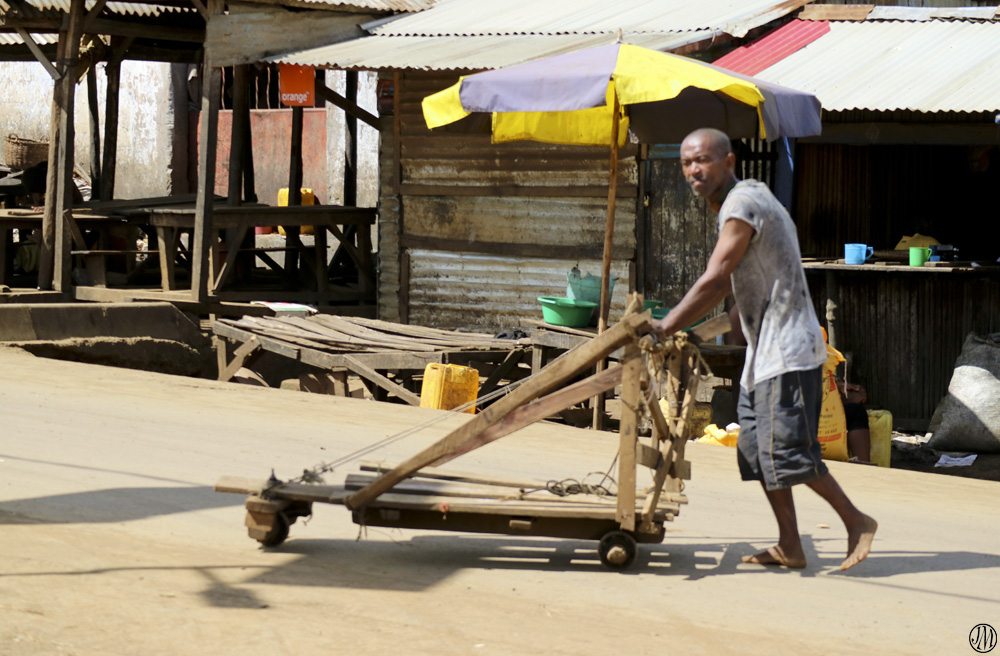 A porter looking for his next load. 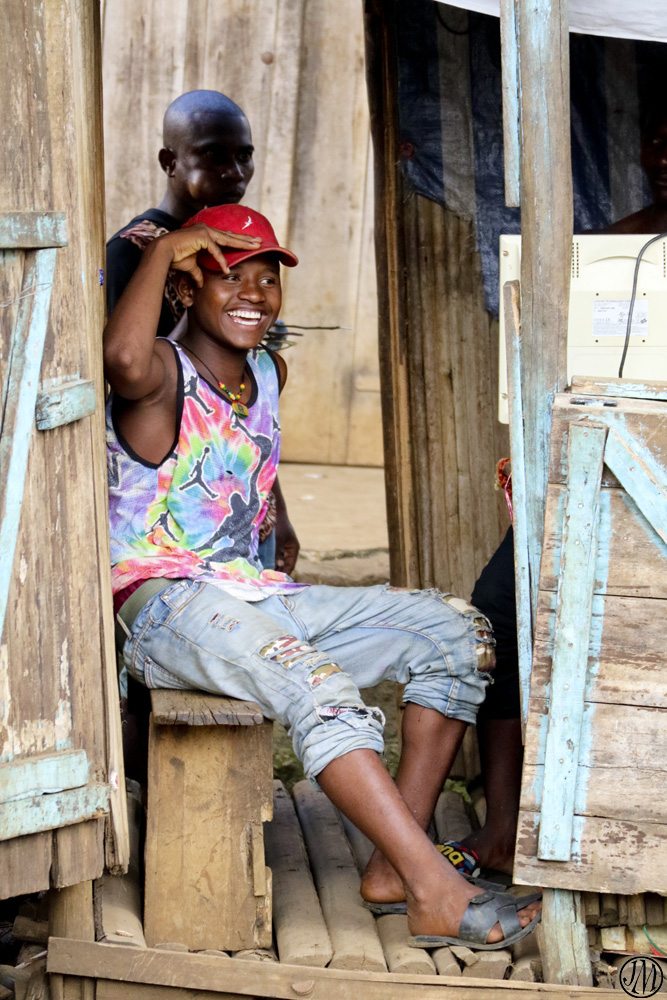 A cheery salute from a stall owner. 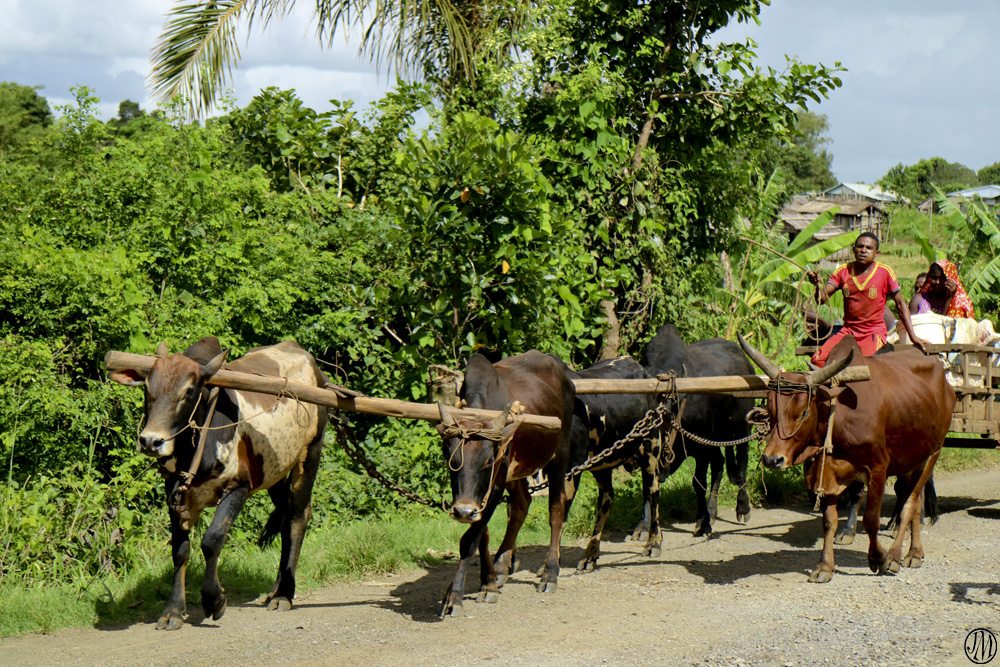 Back on the road again and passing other modes of transport. 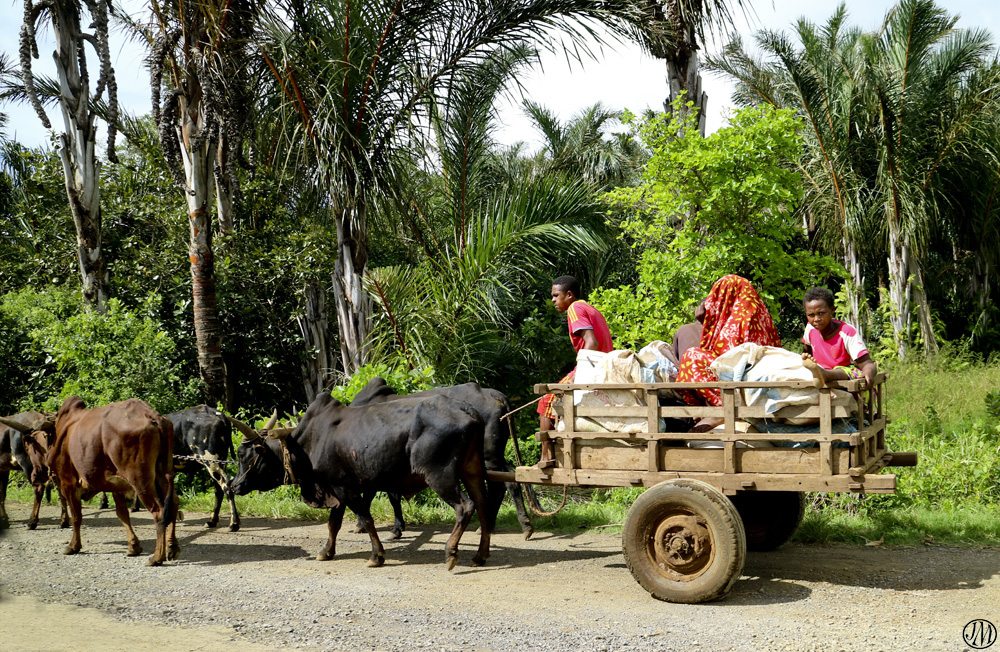 Another quick shot of the ox cart as we drove past. 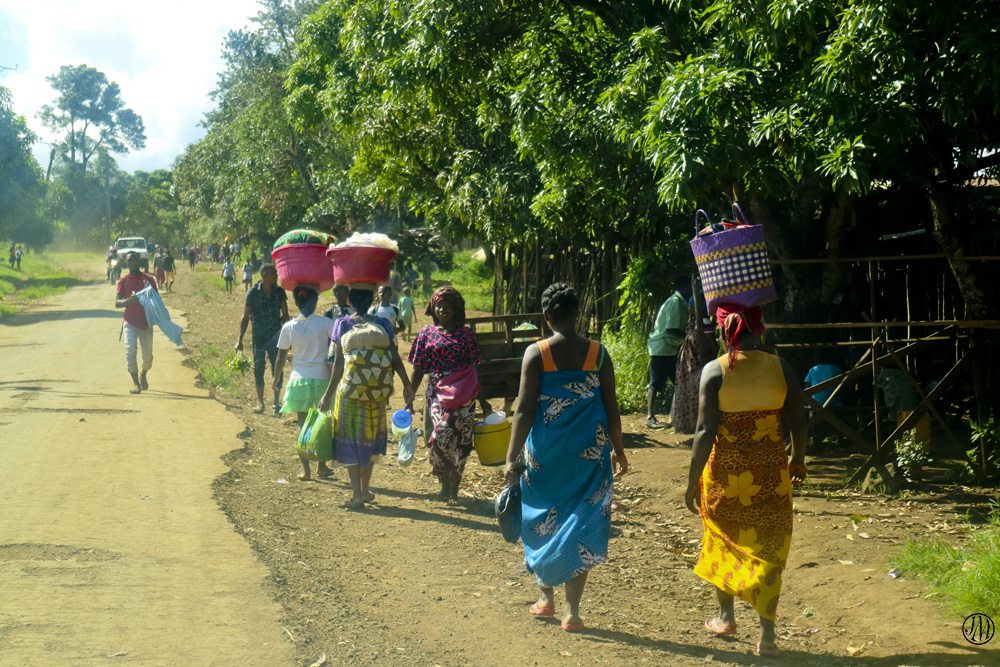 Women homeward bound from the market with baskets and babies. 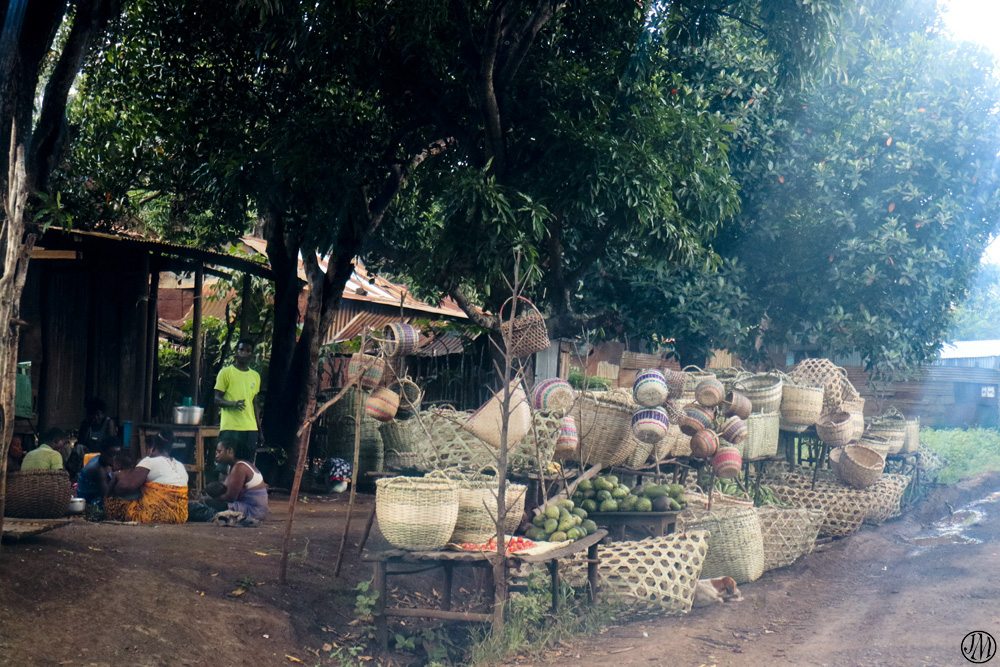 Baskets of all shapes and sizes for sale in this small town. 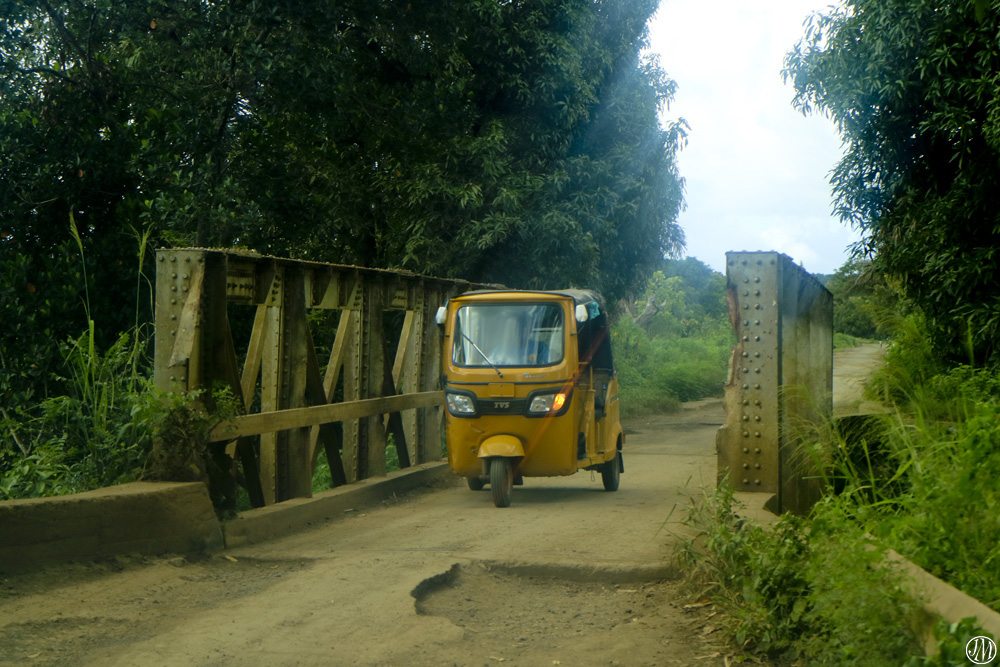 Another popular means of transport, especially around the town are the little tuk-tuks often within and hanging on to the sides. This gives you an impression of the roads as well with just a thin strip of tarseal remaining, potholes either side. 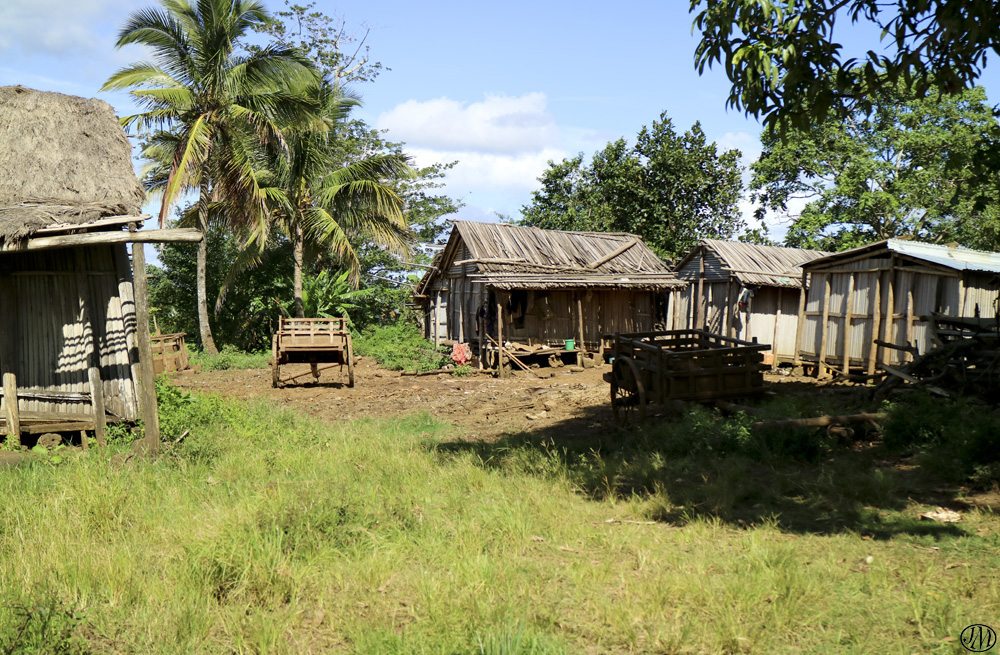 A small hamlet of houses with oxcarts parked. 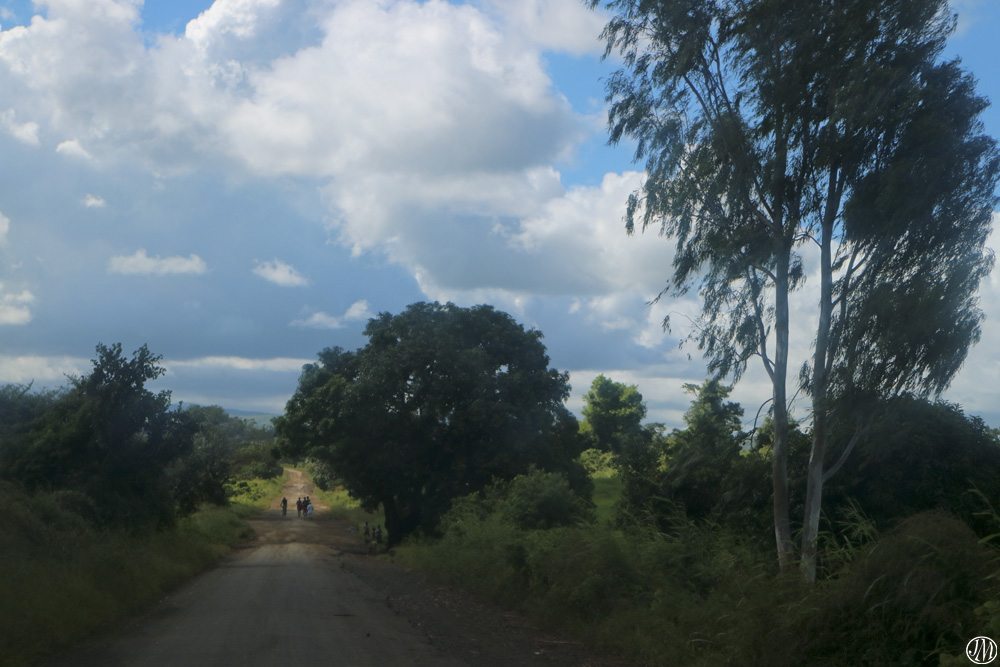 A long stretch of road with the everpresent eucalyptus trees.

The next blog will be about the Ankarana National Park, and more of what you might have been expecting, like lemurs, lizards and chameleons.