Another day in the South and plenty to keep us on our toes at Port Lockroy, which comprises Jougla Point and Goudier Island, both of which are home to numerous nesting gentoo penguins. 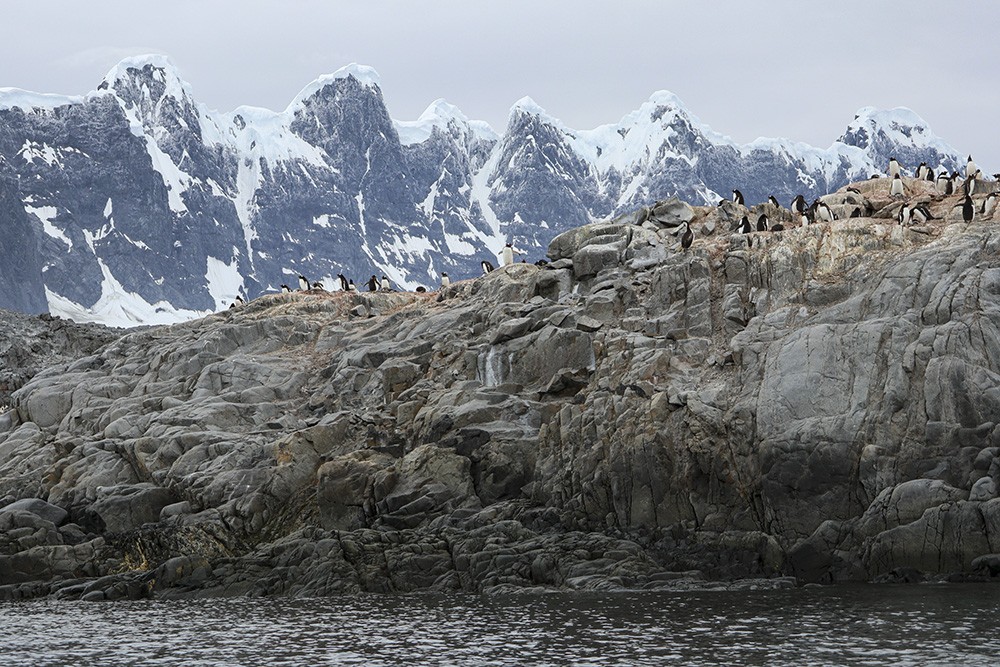 On the rocks between the water and the mountains, nesting penguins. 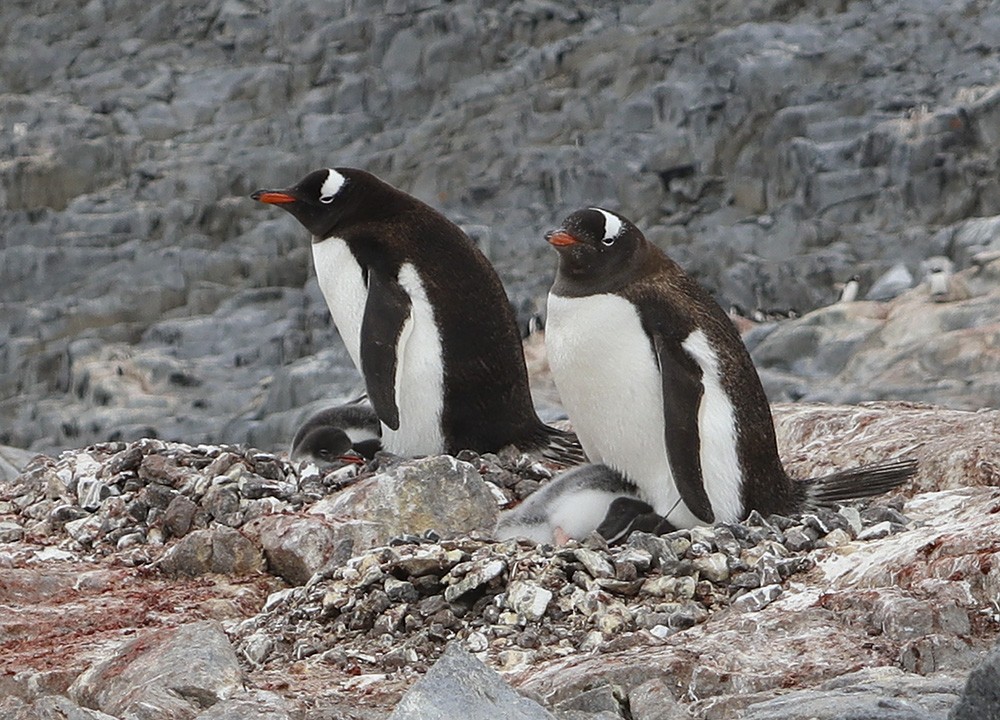 Gentoo penguins are ground-nesting birds, making rudimentary nests from stones, sticks, grass, feathers,
or practically any material that they can find suitable for the purpose.
Egg-laying is usually completed by late October, with two equally sized eggs of about 130g being laid.

Nesting penguins along a ridge of the island.

The bay was discovered in 1904 and named after Edouard Lockroy, a French politician and Vice President of the Chamber of Deputies, who assisted Jean-Baptiste Charcot in obtaining government funding for his French Antarctic Expedition. The harbour was used for whaling between 1911 and 1931. During World War II, the British Military Operation Tabarin established the Port Lockroy Station A on tiny Goudier Island in the bay, which then operated as a British research station until January 16, 1962. 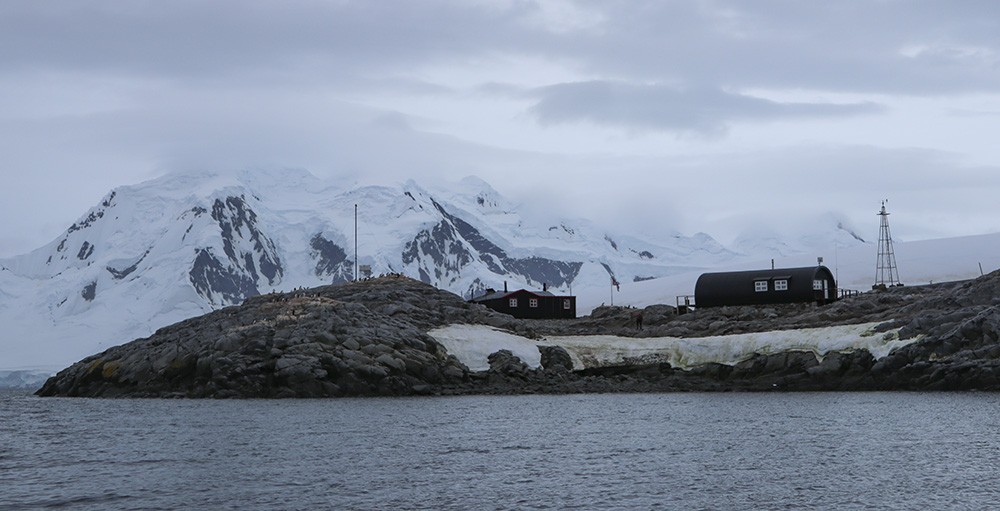 Approaching Port Lockroy with two of the buildings visible.

Following a comprehensive conservation survey in 1994,  Port Lockroy was recognised for its historical importance and designated as Historic Site and Monument No. 61 under the Antarctic Treaty. In 1996, the United Kingdom Antarctic Heritage Trust (www.ukaht.org) supported the British Antarctic Survey and the UK Foreign and Commonwealth Office to restore the base to its working condition. 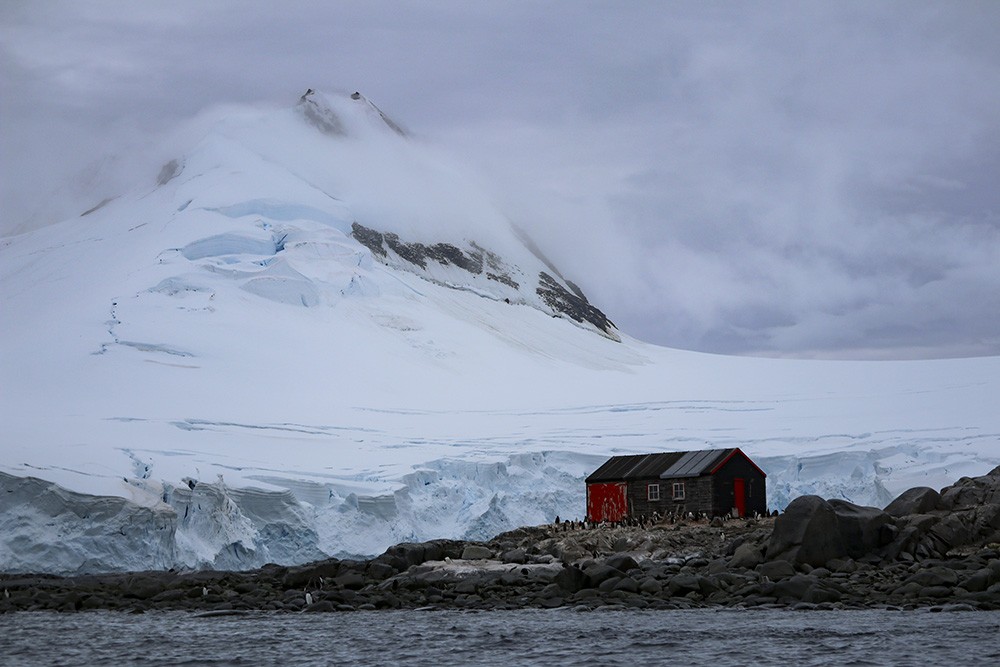 One of the buildings, with its bright red doors bright on this dull day and against the snowy mountain beyond.

In 2006 the responsibility of managing Port Lockroy was passed to the UK Antarctic Heritage Trust. Since then, they have been opening it each summer season as a living museum welcoming visitors from around the world. Using the proceeds from the gift shop and post office they are able to continue the operation of Port Lockroy as well as safeguarding other British historic sites on the continent. The Trust collects data for the British Antarctic Survey to observe the effect of tourism on penguins. Half the island is open to tourists, while the other half is reserved for penguins. A staff of four typically process 70,000 pieces of mail sent by 18,000 visitors that arrive during the five-month Antarctic cruise season. 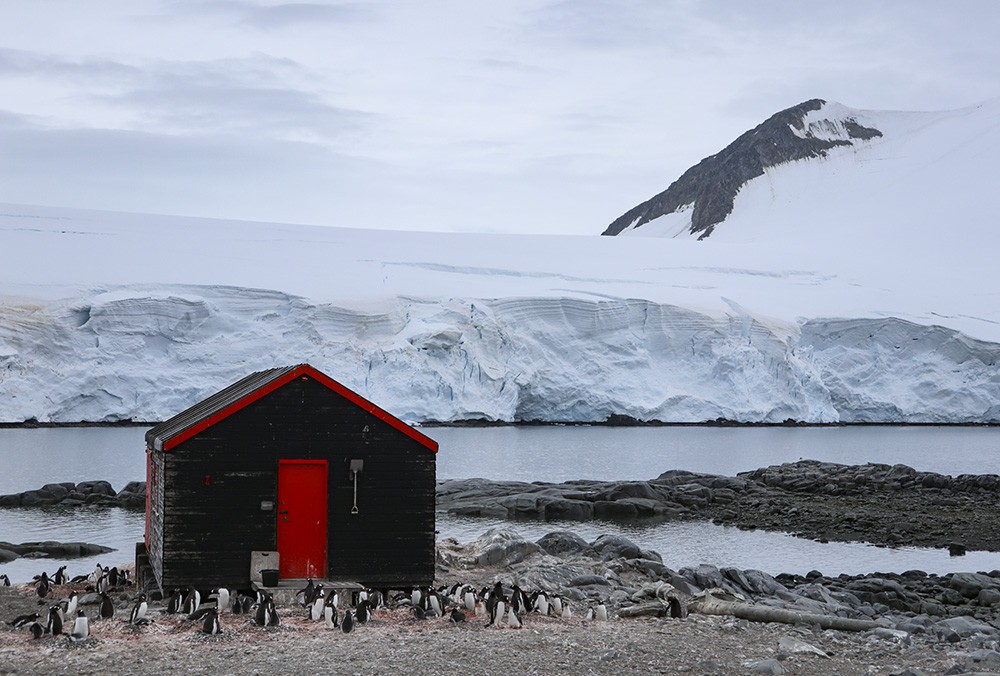 A favourite hangout for the penguins – the supply hut. 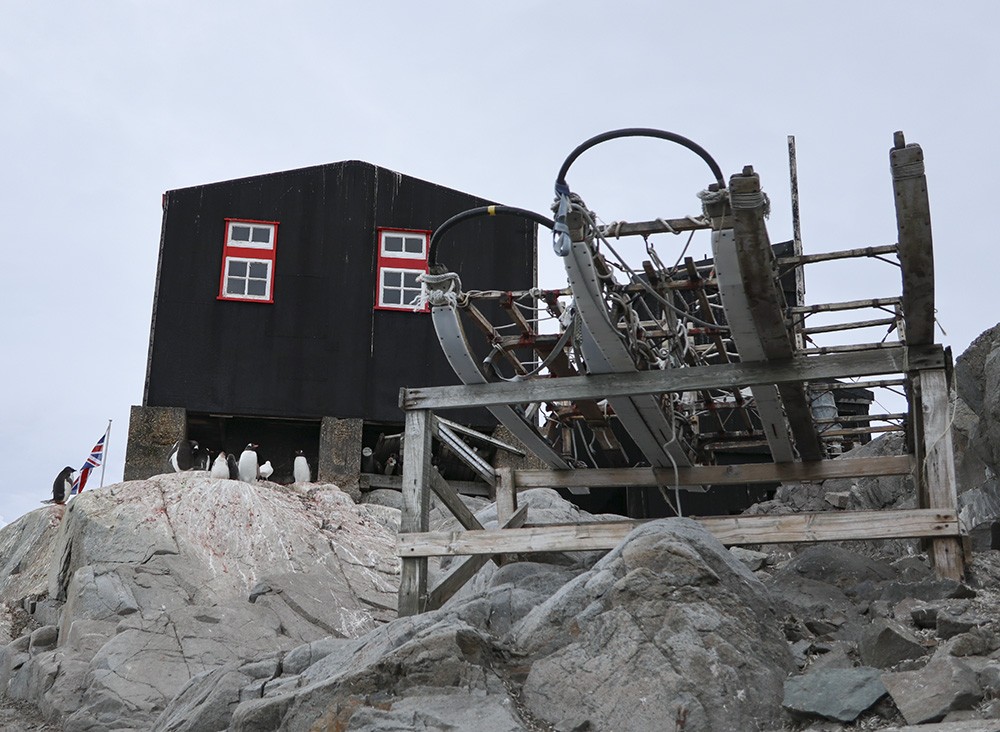 Walking past three old dog sledges, up to Bransfield House, the old Survey Station which has been conserved
as a museum and also houses the shop and Post Office. 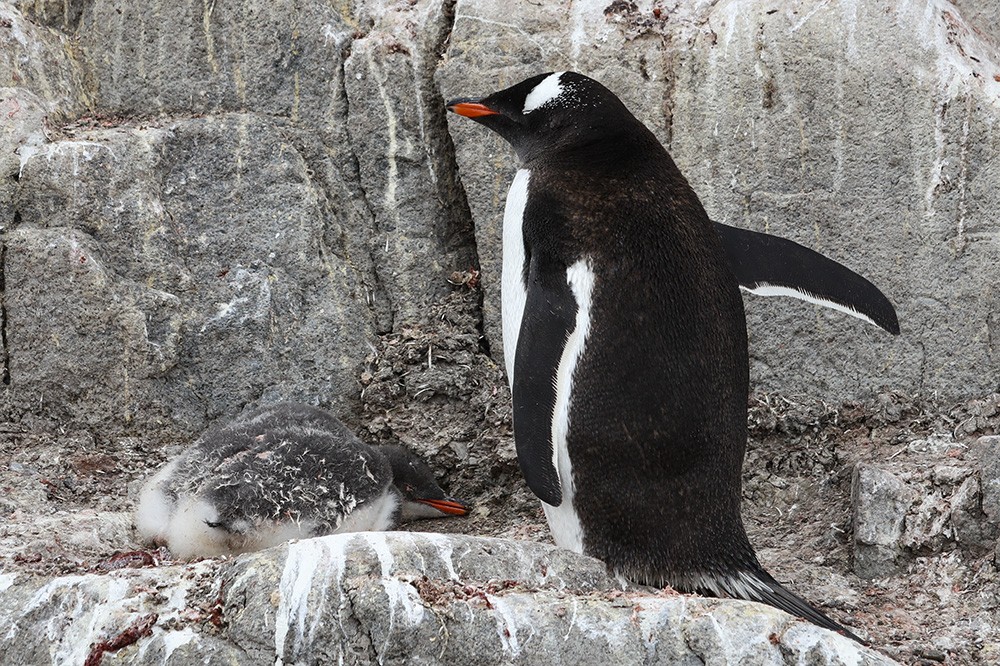 This penguin with its chick was nesting on a rocky ledge right under Bransfield House, a little protected from the elements. 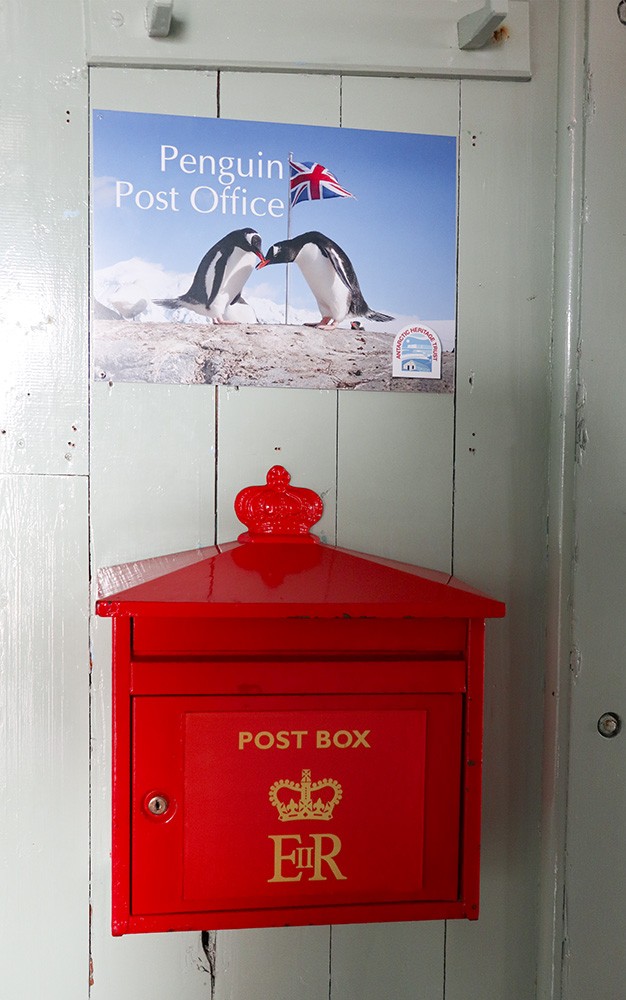 The most southerly Post Office in the world. Each postcard or letter is franked with ‘Port Lockroy’ and can take from 3 weeks to 3 months to reach its final destination. I sent a few to family and friends, and one to myself, so we shall see …

Inside Bransfield House, all of the rooms have been preserved as they would have been when it was occupied by the various Military and Research Teams. 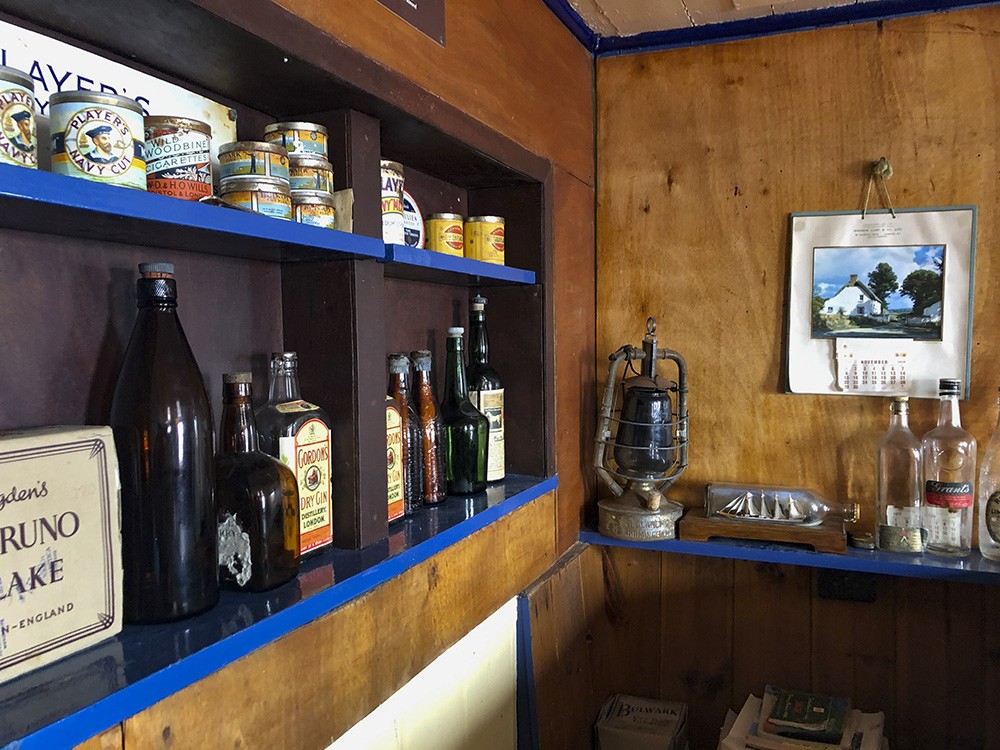 What could be more important than this for an Antarctic Base?  The bar complete with well-known brands of smokes and spirits. 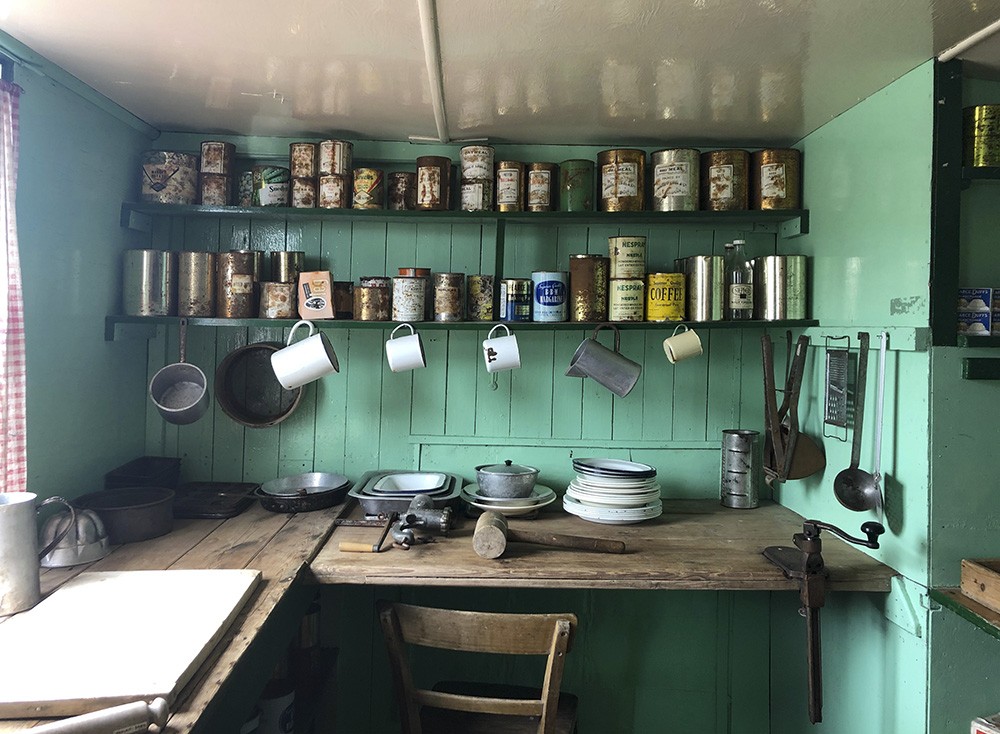 The kitchen with stacks of tin plates and handy utensils, mugs and jugs hanging below the staples. 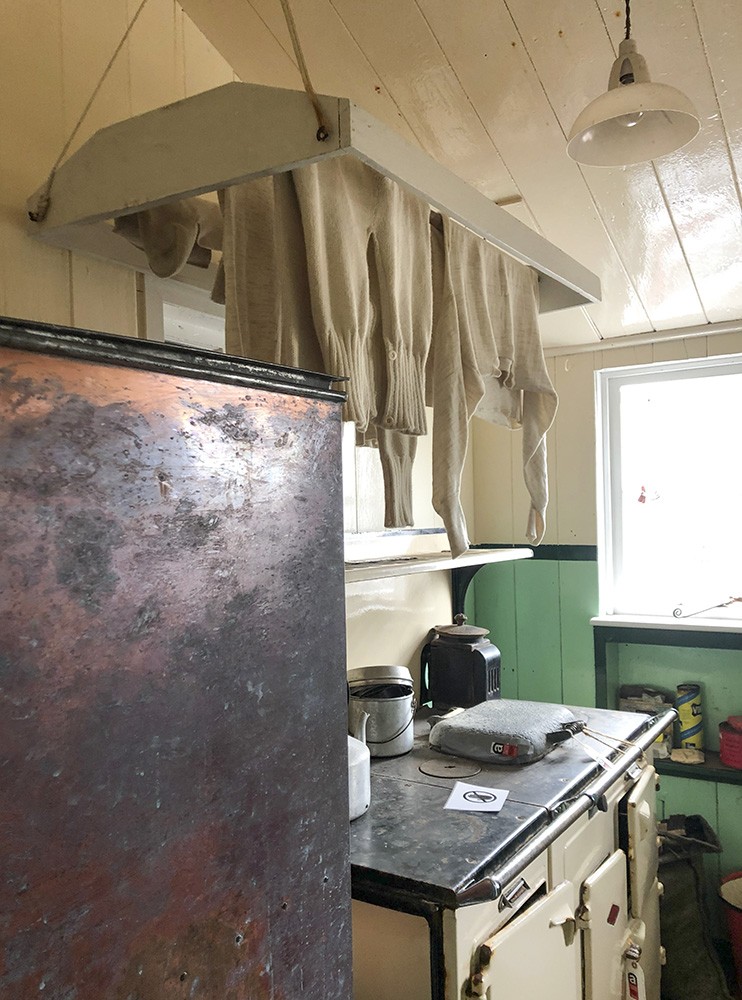 Woollen long-johns and undershirts on a pulley hanging to dry over the old range. 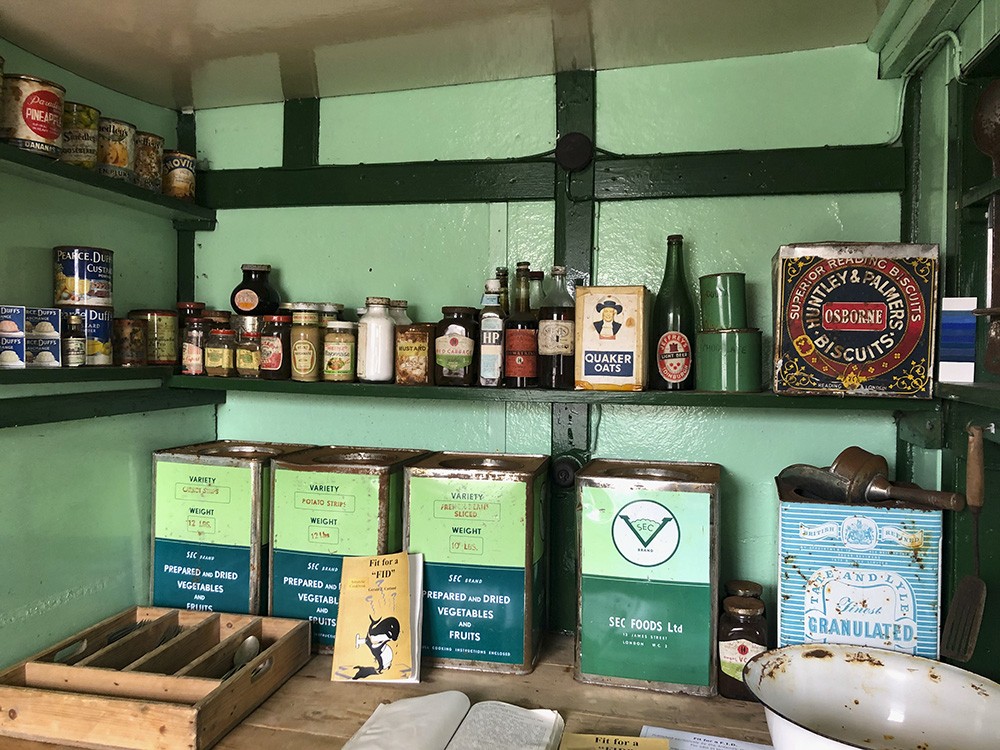 Plenty more stores in the pantry – porridge for breakfast, and condiments to spice up the dried foods. 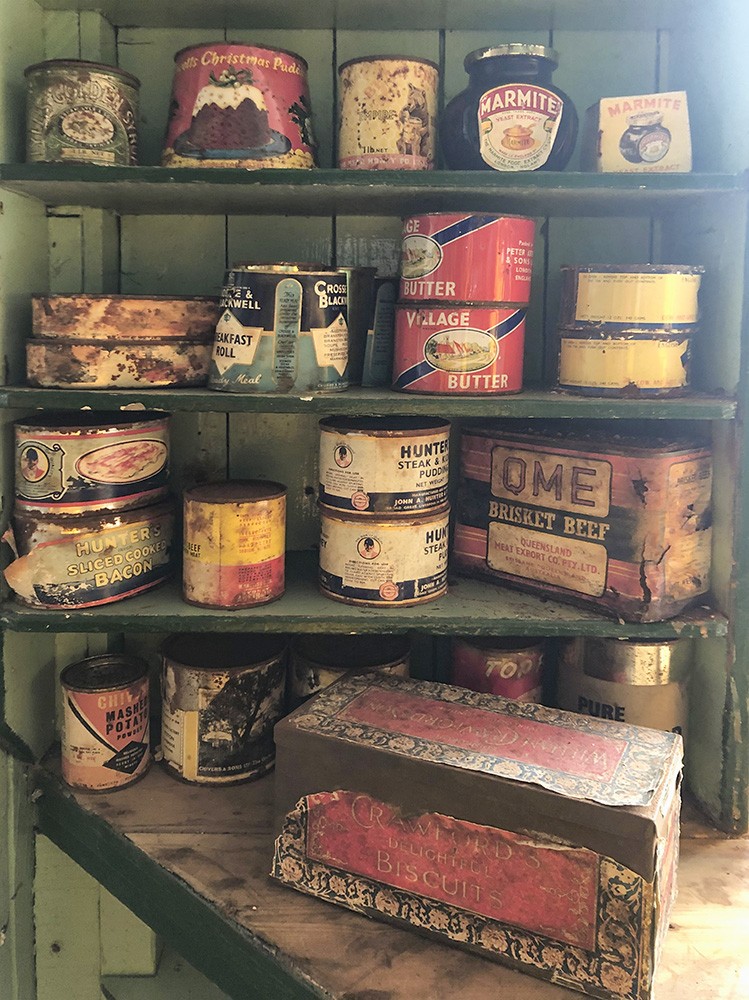 All the makings of a veritable feast here, even a Christmas plum pudding. And of course – marmite. 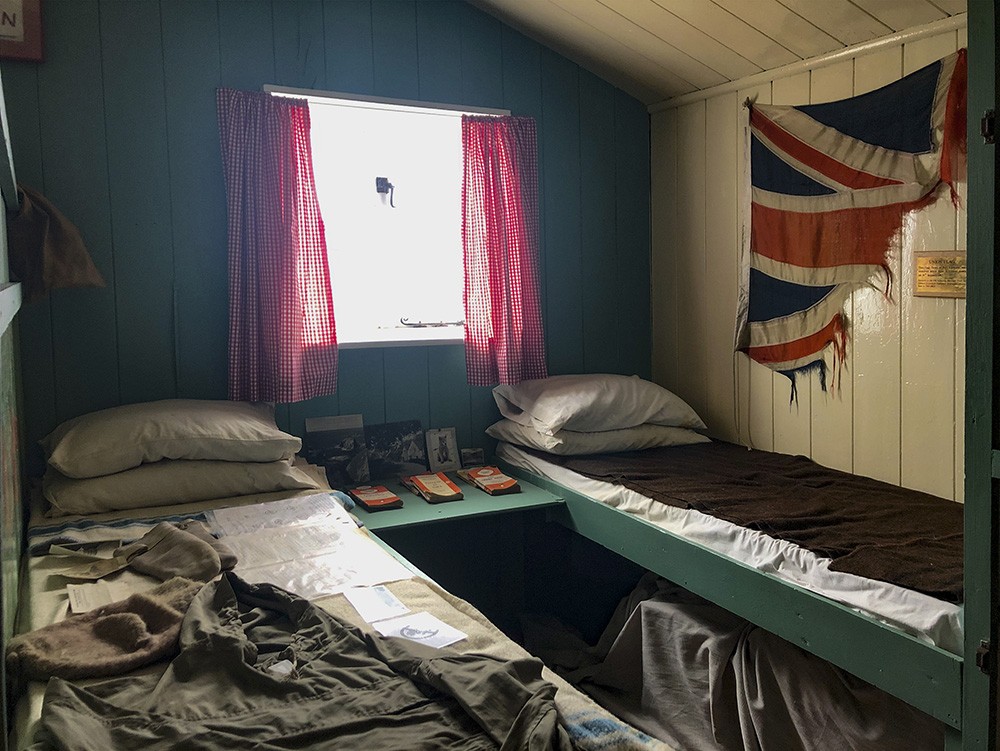 Sleeping quarters with novels to read through a long evening. 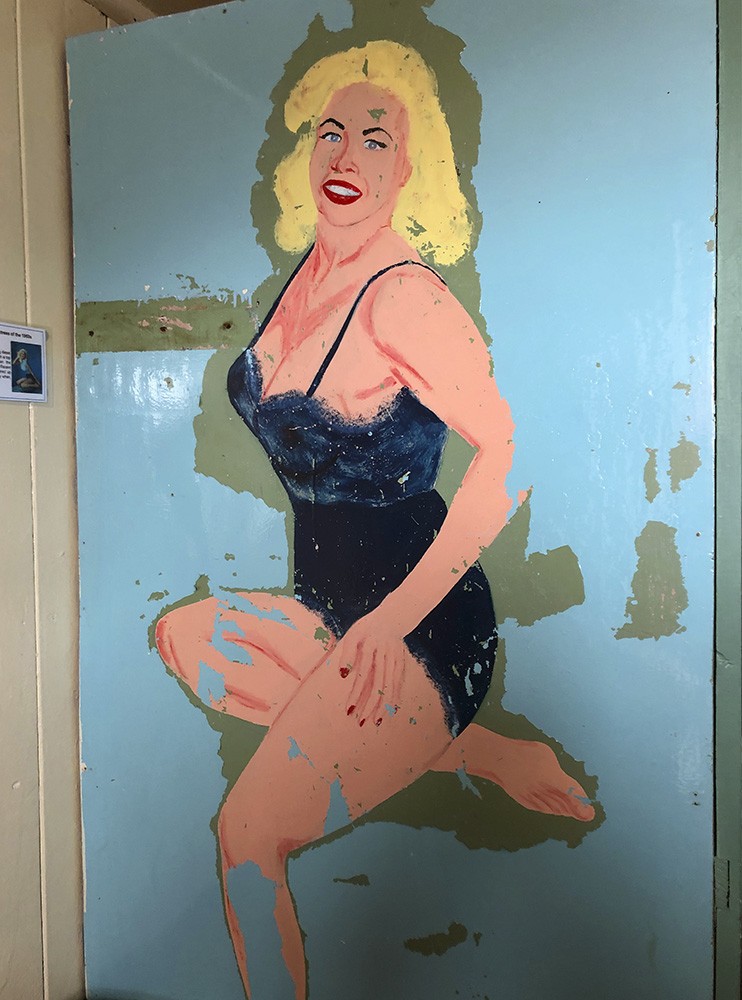 Some artistic member of the team had adorned the walls with pin-up girls for the men – Diana Dors? 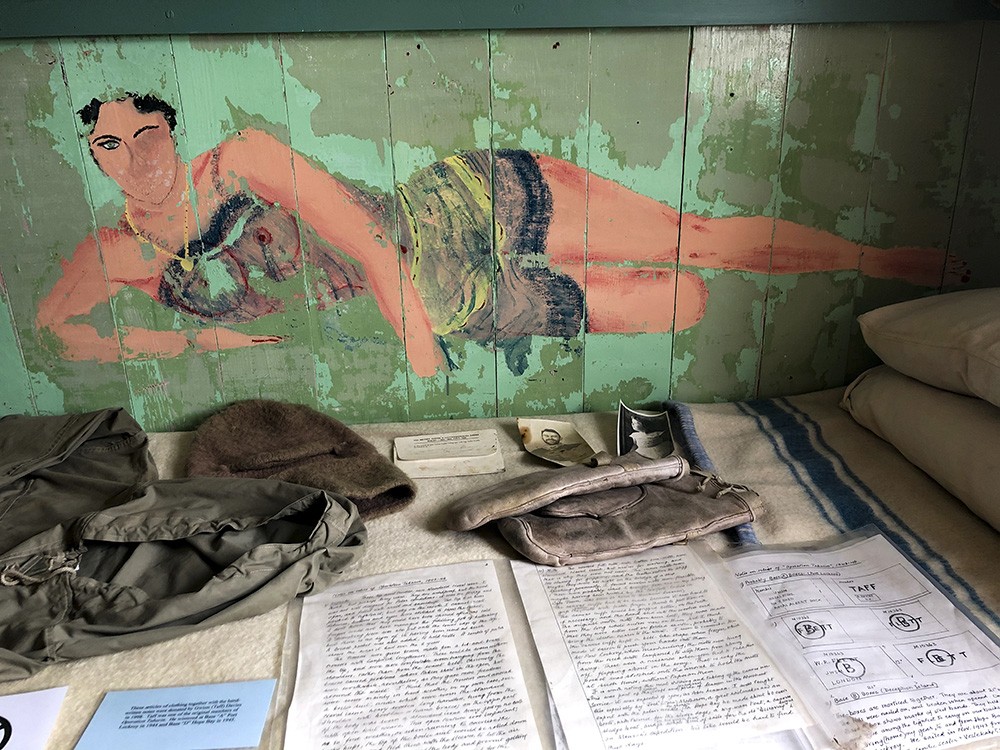 The peeling paint on this reclining beauty makes it look as though she is winking, or maybe she is. 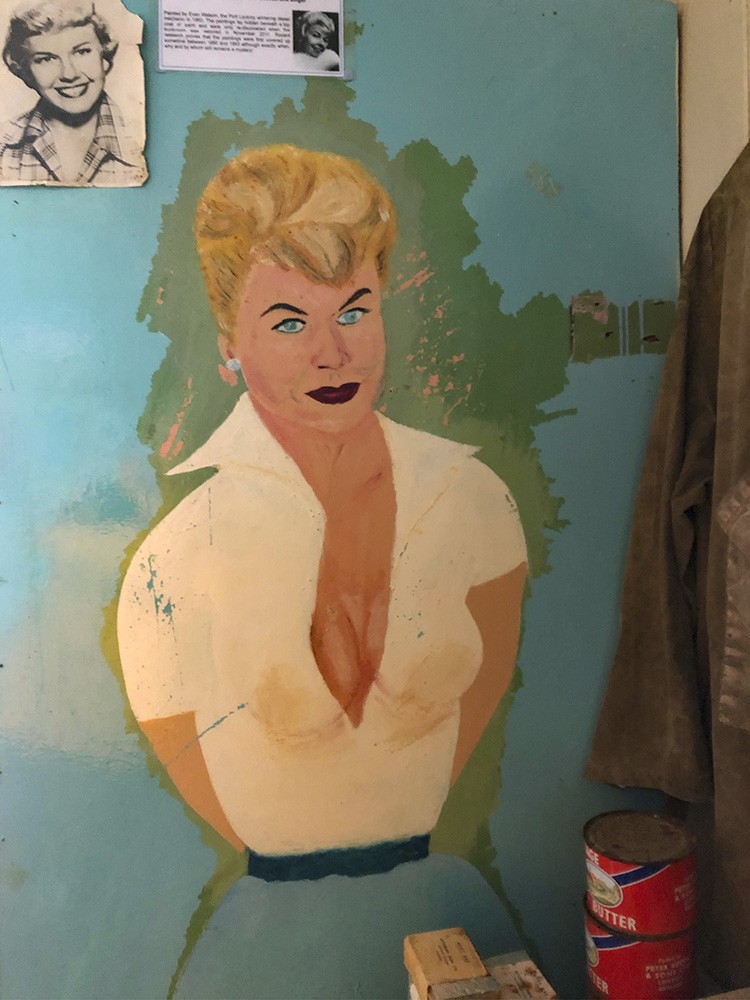 And Doris Day must have been one of their Hollywood idols. 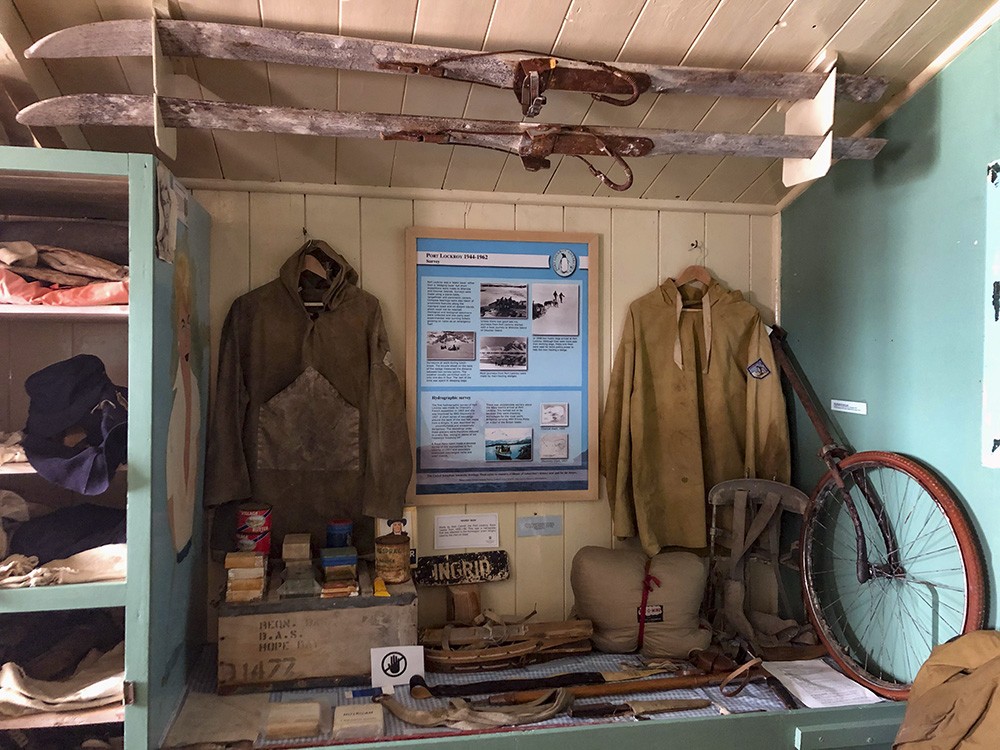 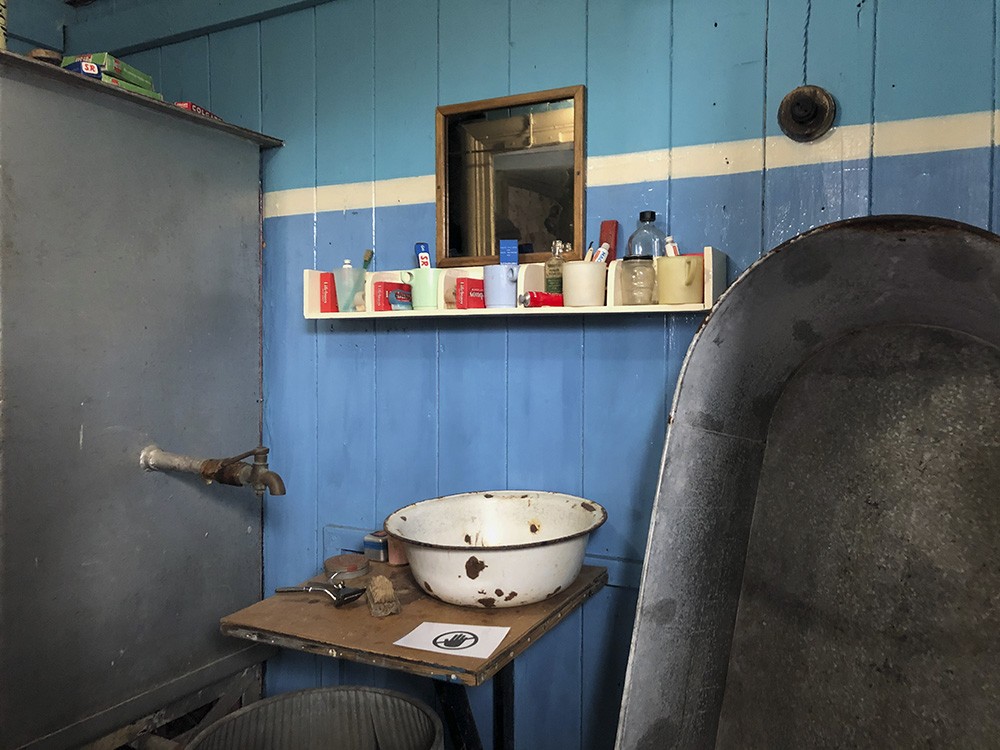 The bathroom with tin bath, washbasin and a lovely row of toothbrushes and soaps on the shelf. 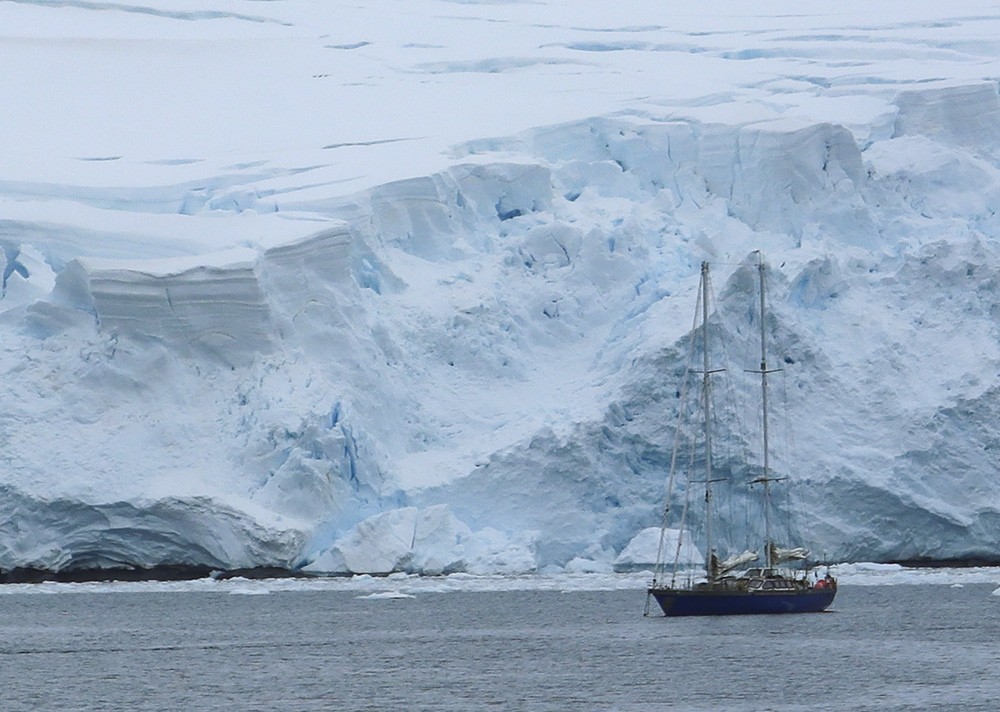 Not so far away, a private yacht is moored, reminding us that the early explorers
came in sailing ships, some not much larger than this modern vessel. 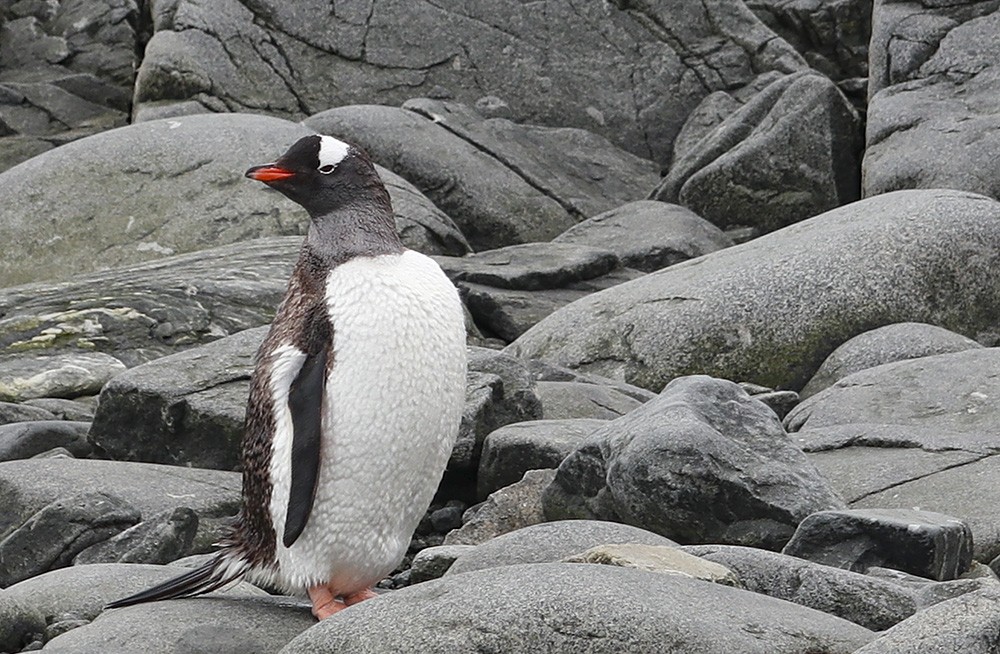 This penguin just hopped out of the icy waters. Penguins lost the power of flight some 100 million years ago,
and have no flight feathers on their wings. Their stiff close-packed feathers form a thick
insulating mat that is impervious to water and provides a good streamlined surface for swimming. 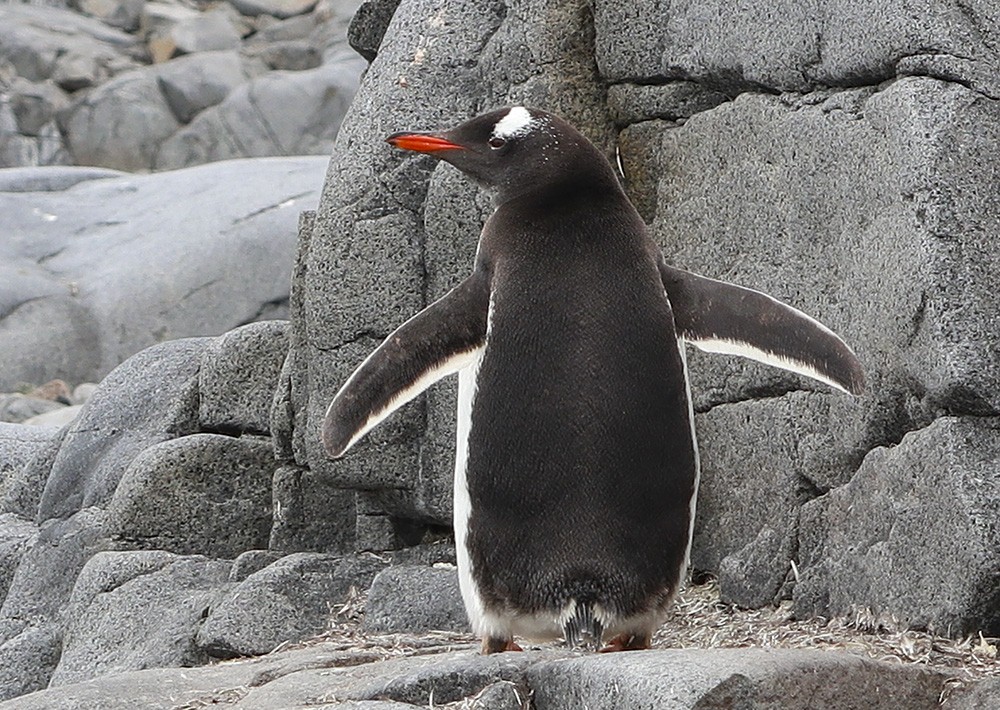 Penguins are unique in that the feathers are evenly packed over the surface of the body. For insulation, penguins have
a thick, air-filled, windproof coat that reduces heat loss to a minimum. However, when diving, the penguin needs a thin, smooth, waterproof coat with no trapped air. To achieve this, they use muscles attached to the shaft of the feather
to ‘lockdown’ the coat to create a water-tight barrier. Additionally, penguins preen their feathers with an oil which
is produced by a gland near the base of their tail. 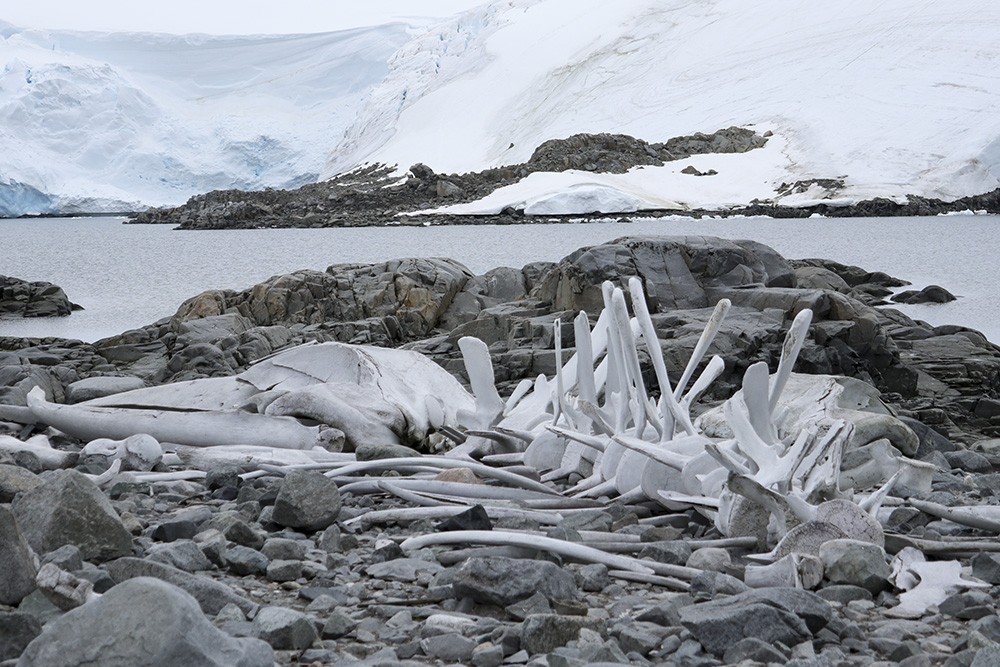 The bleached bones of an almost complete skeleton of a whale lie among the rocks by the shore. 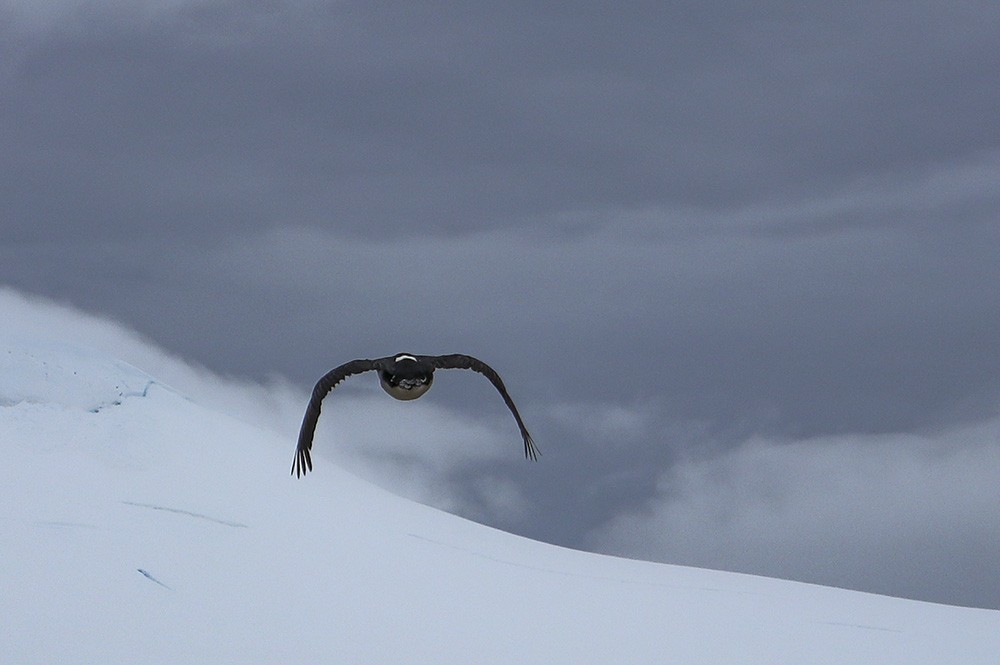 Overhead a Brown Skua hovers, watching and waiting for its next meal.  Skuas have sharp falcon-like bills,
and tiny claws at the end of their webbed feet. During the summer in Antarctica, Skuas catch and kill the chicks
of other seabirds, and are often found around large seabird colonies like penguin rookeries. 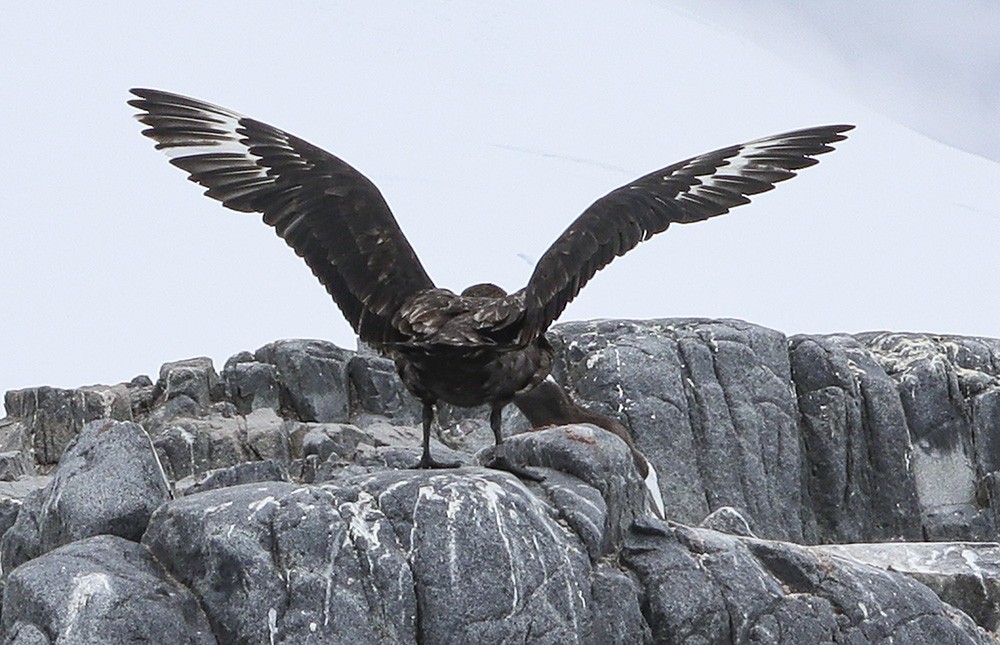 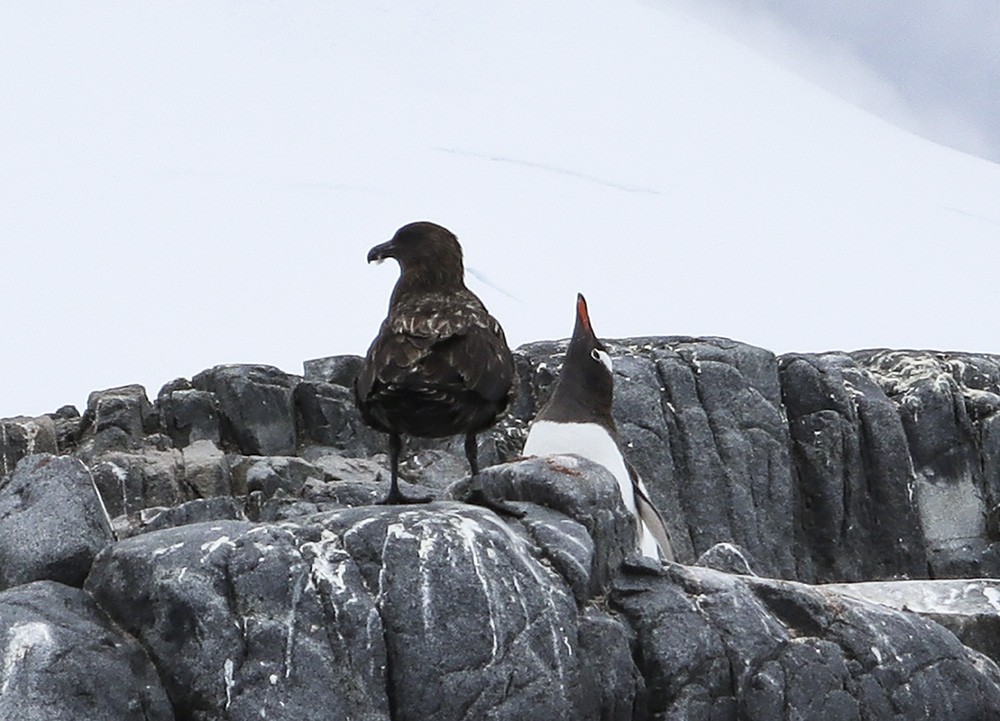 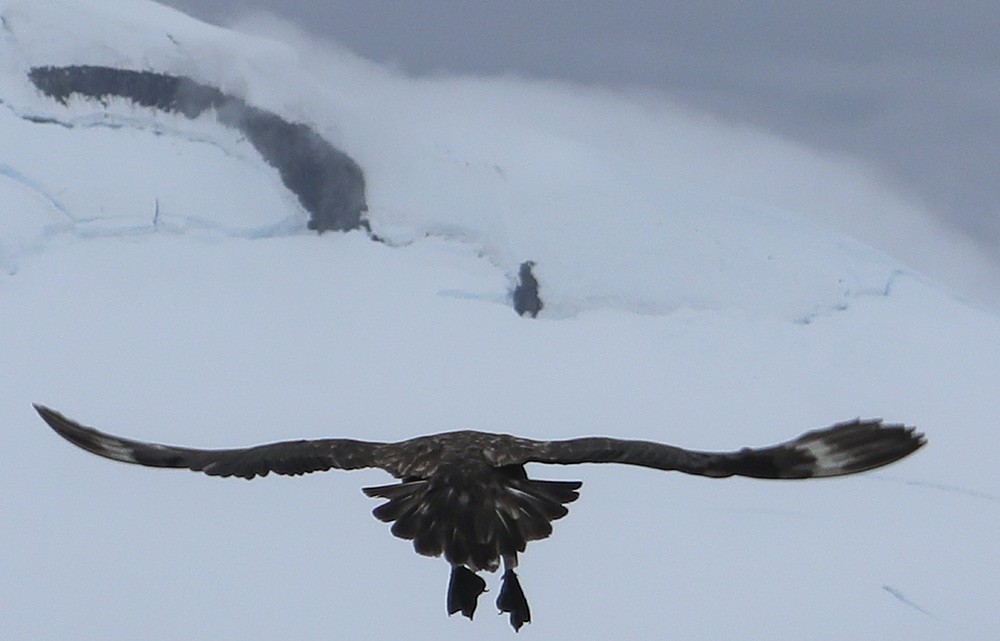 … and this time the skua flies off empty beaked. 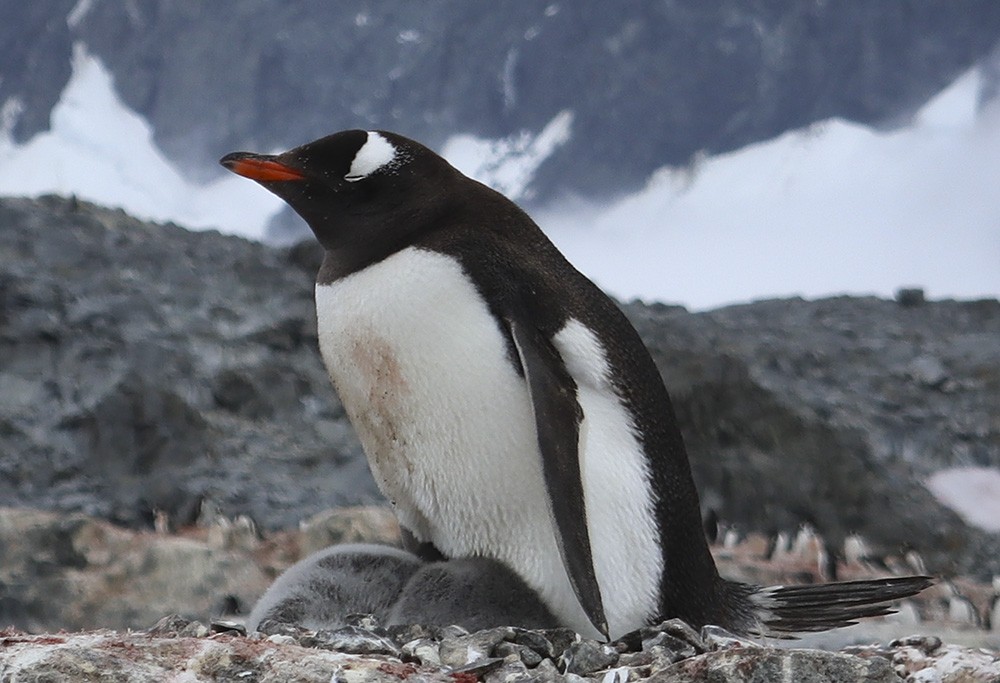 Two chicks well-fed, snuggle against the warmth of their parent. They will not go to sea until their baby fluff
has moulted after a couple of months and their adult feathers have grown in. 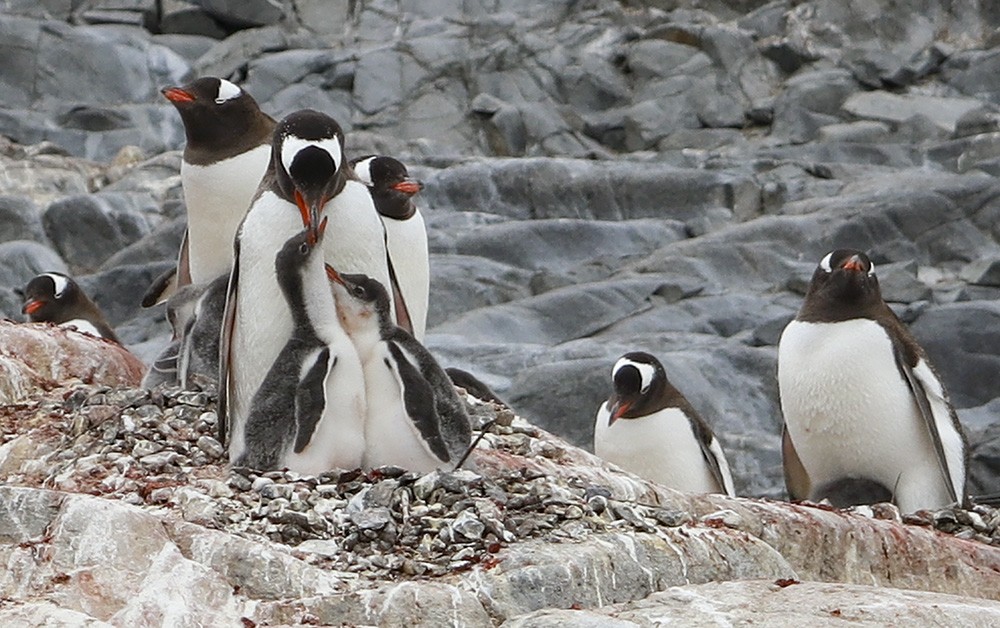 Penguin chicks are constantly hungry and in the first months of life are totally dependent on their parents bringing
and regurgitating food into their upturned open beaks. 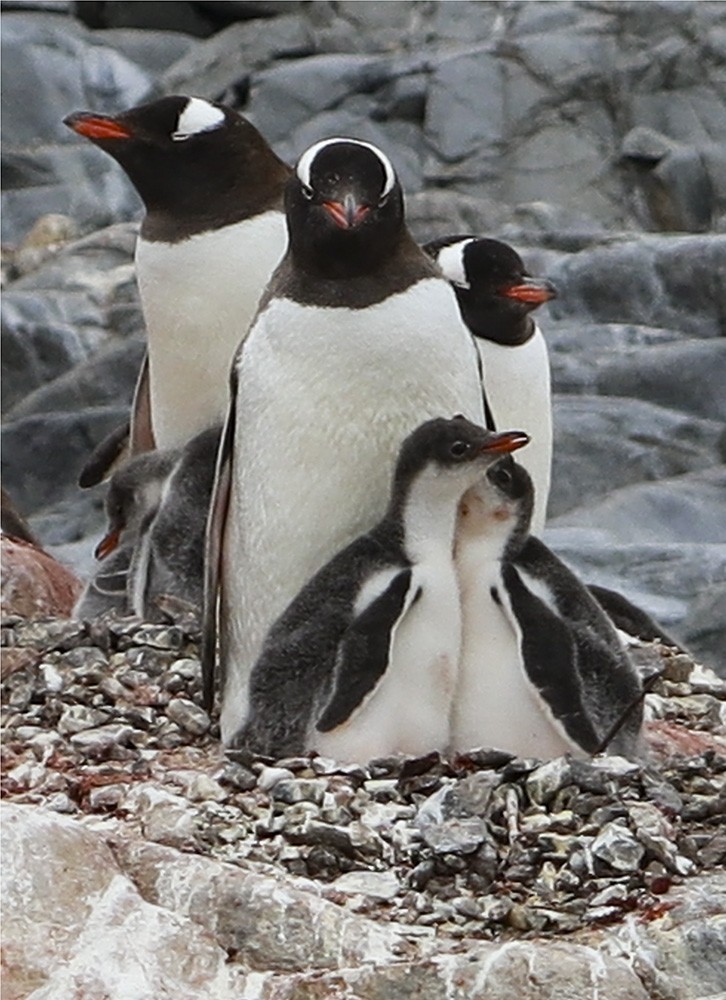 These two little grey and white fluff-balls appear sated for the moment.

In the next blog, I will take you with me down the stunningly beautiful Lemaire Channel and into the Iceberg Garden.  We did this all on the same day as we visited Port Lockroy, but I think it merits its own story.

Until then, I hope you are not already tired of ice and penguins, because there are more to come.